Read Witness for the Defense Online

Witness for the Defense 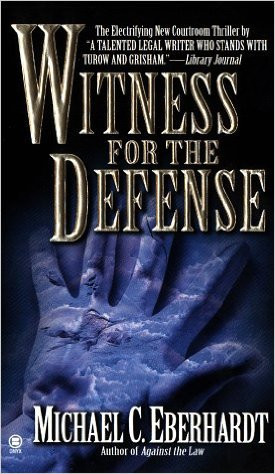 His first novel
Body of a Crime
, was hailed as “a page-turner” (
San Francisco Chronicle
). His next thriller,
Against the Law
, was “packed with twists” (
Entertainment Weekly
). Now criminal defense attorney Michael C. Eberhardt returns with a shattering novel of legal suspense that proves beyond a shadow of a doubt that he is “a writer to watch” (
Publishers Weekly
).

WITNESS FOR THE DEFENSE

Public defender Hunter Dobbs finds his reputation on the line when he’s falsely accused of coercing a witness’s testimony. An unlikely ally comes to his rescue: the beautiful and brilliant lawyer, Sarah Harris, daughter of Hunter’s longtime nemesis behind the bench. She offers him a deal—quid pro quo. She’ll represent him if he’ll defend a family friend against charges of kidnapping a boy.

Now both defender and accused, Hunter will view the system from the inside out. As both cases collide in a brutal murder, he’ll watch his lofty ideals crash and burn—and justice get twisted beyond recognition—when he and Sarah must risk everything to prevent a killer from striking again.

Praise for the legal thrillers

“[Filled with] shocking secrets and cover-ups.”

“Everyone’s got something on someone else…leaves you with a dizzy sense of paranoia.”

“A writer to watch.”

Body of a Crime

“A tense, taut, terrific thriller and a sleeper to climb the bestseller lists.”

“Eberhardt’s ability to track a seemingly clear case toward complexity, then backtrack to an entirely different, equally credible picture—and to deliver the result with a final twist—makes him a storyteller of great promise.”

“Michael Eberhardt makes a strong debut in
Body of a Crime
—one that gives his readers memorable characters and an ending that is certain to surprise. It will leave John Grisham looking anxiously over his shoulder.”

“Rich and complex, Body of a Crime is a high-stakes, high-tension thriller from the first page to the surprising end.”

author of
And the Sea Will Tell

“A ride you will not want to get off.”

“No finer courtroom drama to be read anywhere!”

“Stands with Turow and Grisham.”

“Puts Mr. Eberhardt in the august company of John Grisham and Scott Turow. The stunning conclusion produces shocks and aftershocks.”

“Suspense and excitement on every page. Outstanding.”

It is the right of a lawyer to undertake the defense of a person accused of a crime, regardless of his personal opinion as to the guilt of the accused; otherwise innocent persons, victims only of suspicious circumstances, might be denied proper defense. Having undertaken such defense, the lawyer is bound, by all fair and honorable means, to present every defense that the law of the land permits, to the end that no person may be deprived of life or liberty, but by due process of law.

of The American Bar Association

I wish to express my sincere appreciation to Don Hanson, Eric Wilinski, John Paine, Avrum Harris, Susan Wilkerson, and The Honorable Kenneth Freeman for their wisdom and technical expertise.

A special thanks to Jennifer Robinson and Edward Stackler for their expert editorial guidance.

A tip of the hat to my son, Todd, for helping me ripen this story. His input was invaluable.

Profound and heartfelt appreciation to my agent and friend, Peter Miller. His hard work, advice, and professional guidance will always be appreciated and remembered.

For her keen sense of storytelling and her unwavering faith in both me and my work, a special thank-you to my editor, Michaela Hamilton.

San Francisco in late September should be bottled and sold at Bloomingdale’s. The summer fog gives way to crystal-clear autumn air, and blinding sunlight ricochets off the glass high-rises downtown. The damp summer winds suddenly cease, and a balmy warmth envelops the city. Everything is fresh; anything seems possible.

But the San Francisco I know best is one part mahogany-paneled walls and shiny marbled hallways of the city courts, and one part grime and crime encased in the icy steel bars and dirty concrete floors of its jails.

I was sitting in the dank attorney interview room of the courthouse lockup, waiting to question a witness while the officers unloaded the twelve-thirty bus from central jail. I’d been interviewing inmates daily for the last nine years, and had never gotten used to the conditions of the place. The smell of urine was bad enough, but that was nothing compared to the snot-smeared glass between me and my client. And if that failed to turn my stomach, there was the gang logo graffiti written across the inmates’ walls—using human excrement as ink.

And I felt tired—dead tired.

The day before, I had joined the ranks of the unmarried men of the world when my divorce to Marlene became final. In California it’s called irreconcilable differences. But in our case there was nothing irreconcilable about it. It was that neither of us even tried. We both had all-consuming careers, and the effort it would have taken to save our marriage seemed more than we had in us to expend.

My sleepless night began when the clock struck midnight, making it official. My head swam for most of the night with regrets and recriminations. When I awoke, I found myself reaching for Marlene, more than a year after our separation.

After I showered, I looked in the mirror. The trauma of the divorce had taken its toll. My muscular chest looked like vanilla pudding, my dark hair framed in gray. And if that wasn’t enough to make me want to go back to bed and hide, when I stepped on the scale, I weighed in at only one-fifty-nine, down another two pounds.

I tried to focus on the task at hand. In a few minutes, I had to interview Bobby Miles, a potential defense witness, in the Salvador Martinez murder case. Four months earlier, Martinez and one of his buddies were charged with the drive-by shooting of Miguel Flores and his six-year-old sister, Amanda. The two had been shot in their front yard, while Miguel had been walking from the house to his car. Amanda had been hit in the head by several stray shotgun pellets meant for her brother. There was only one witness to the shooting, a twenty-two-year-old buddy of Flores, Jesus Aragon. He had not only identified the car and its license number, but had also been able to convincingly pick both the driver and shooter out of a lineup the following day.

I had received an emergency telephone call from Martinez late the previous afternoon. A fellow inmate, he said, had been present at the shooting; he had seen the whole thing, and would testify to the fact that neither Martinez nor his codefendant was responsible. Oh, sure, I thought. And I’m tired because I slept with Sharon Stone last night.

Normally, I wouldn’t waste my time talking to someone a client had primed to lie for him, but this interview wasn’t really about trying to help a client. It was about protecting my rear end. This was a special-circumstance murder, one which I knew would be automatically appealed after conviction. When Martinez’s guilty verdict went up on appeal, the first thing the appellate court would look for would be attorney incompetence—and the failure to interview a potential defense witness would be number one on their list. As much as I hated the idea, I had to go through the motions and see what this guy had to say. Later, I would inform Martinez that his witness was a liar, and that in my opinion he should take the D.A.’s latest offer.

Finally, one of the jailers opened the steel door. Seconds later, a short, slightly built blond kid came shuffling in. His feet were shackled, forcing him to take mini steps. He sat on the wooden stool facing mine on the other side of the glass partition.

I nodded my thanks to the deputy and sat forward to get a good look at the young man. His head was lowered as he stared at the counter in front of him. I was surprised by his physical appearance. Though I knew he had to be older, he didn’t look a day over sixteen. His face was as smooth as a baby’s and nearly as pale. His hands were slight and slender, almost artistic. Even his brooding facial expression didn’t seem to detract from his overall good looks, a quality that would certainly not be his ally in this hellhole. I would have felt more comfortable attacking some tattooed, slack-jawed rapist than this child.

“Are you Bobby Miles?” I asked.

Without raising his head, he nodded in response.

“Can I call you Bobby?” It was disconcerting to call someone half my age by his last name. But then, I was in a place where all they ever used was last names.

Again, the boy nodded his head. This kid would do great in front of a jury, I thought wryly. Heck of a strong witness.

“Bobby, I represent Salvador Martinez. His trial starts tomorrow, and he informed me you might know something about his case.”

At least now I knew he could talk. But what was his story? He obviously wasn’t one of Martinez’s gangbanging buddies.

“Why don’t you tell me what you know?” I couldn’t lead him. If, by some slim chance, he ever did end up testifying for Martinez, I had to be sure he was telling the truth.

“Where do you want me to start?” he said, lifting his head and looking at me for the first time.

His face was red and puffy and smudged with dirt. His eyes were dark and swollen, like he’d been crying. “What the hell are you doing in this place?” I wanted to ask. But I had long ago learned not to get involved with someone else’s client. I could barely manage my own caseload.

“Eighteen last month,” he said. He tried to wipe his eyes with his hands, but the chains connected to his waist and feet made it impossible.

“How long have you been in here?”

“I was arrested two days ago for selling some weed to my friends.”

I shook my head. No big deal, I thought. “And how long have you known my client?”

“Then why do you think you can help him?”

“Because I saw it happen,” the kid said nervously. “I was there.”

I put on a hard skeptical face. “If you were, why didn’t you come forward sooner?”

“Because I didn’t want to get involved in any gang shit.”

“Why do you think the shooting had something to do with gang activity?”

“A car doesn’t just pull up in front of a house in that area and start blasting a shotgun unless that’s exactly what it is.”

I knew the shooting had occurred south of downtown San Francisco in the outer Mission district. The neighborhood used to be mostly Italian and Irish, but since the seventies the influx of Central and South American immigrants had changed the community into a Spanish-speaking cultural enclave. Then came the drug cartels and gangs and the tentacles of the Mexican Mafia, which turned the streets ever more dangerous, and gave rise to the Salvador Martinezes of the world.

“How did you happen to be in the area in the first place?”

“I live a couple blocks over.”

“Well, I don’t really live there. I was staying with my grandmother. I live with my parents in San Jose, but they dump me off there almost every weekend while they go off to Reno.”

“Why? Aren’t you old enough to stay home alone?”

“I threw a couple of parties.”

I remembered what it was like to be his age. “And they got out of hand,” I interjected.