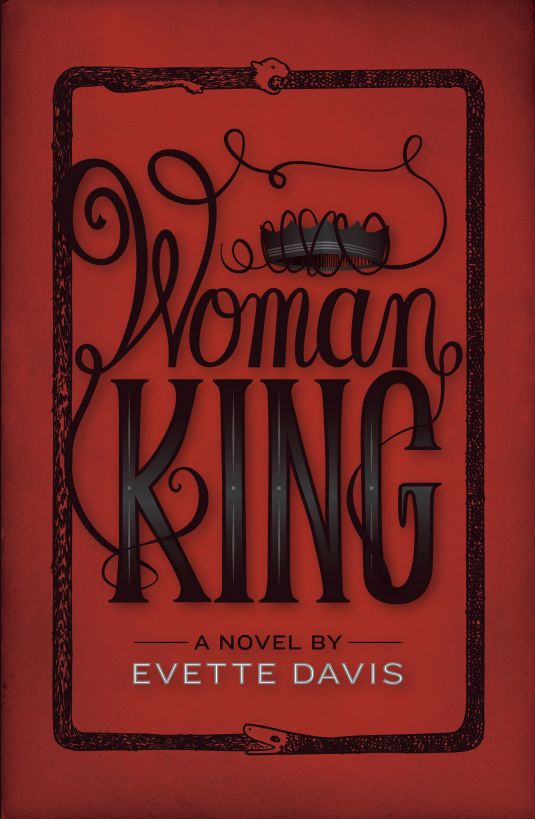 Woman King is
a work of fiction. The characters, as well as all incidents and
dialogue, are products of the author’s imagination and are not to
be construed as real. Any resemblance to actual events or persons
living, dead, or undead, is entirely coincidental.

Woman King. Copyright © 2012 by Evette Davis. All
rights reserved. No part of this book may be used or reproduced in
any manner whatsoever without written permission except in the case
of brief quotations embodied in critical articles and reviews. For
more information, contact Evette Davis at 150 Post Street, San
Francisco, CA 94108.

To Alec
and Stella, for your patience and understanding, especially on the
days when I asked to be excused from a family activity so I could
stay home to write. I love you both very much.

We’re dealing with a point on a map of

fog; Lemuria is a city unknown.

Most of you are probably familiar with the
fact that San Francisco is a foggy city. What few people know is
the real reason for the fog. San Francisco’s weather, despite what
the nightly news might say, is controlled by a powerful spell. This
spell conjures up the cool, wet fog to keep people from seeing what
is really going on around them. The fog tumbles across the hills
and mountains like a great grey-white wave, pressing inward until
it erases San Francisco from view. On those days and nights, when
most people can barely see more than the hand in front of their
face, the city’s Others—fairies, witches, vampires and
werewolves—can meet and attend to their business. In the darkness
of night, the light muted, the air damp, it can be difficult to
know if what you are seeing is real.

For the Others, there can be no trace of them
or their activities left behind. The fog is their eraser, a privacy
screen cast up to shield humans from an unsettling truth: They are
not alone in this world, and they are not in control.

Besides its reputation for fog, San Francisco
is also known for its colorful population. It’s no accident that so
many outlandish people live there. The city is home to an enormous
population of Others, alive and undead. That the Beat poets, the
free-speech movement, the Summer of Love, the sexual revolution,
and the gay rights movement originated in San Francisco is no
coincidence. Amidst the tattooed, pierced and corseted, the Others
are free to live their lives. In San Francisco, it is easy to hide
in plain sight

He paused to give me time to prepare.

“The board has decided we need someone more,
well…
powerful
. I’m afraid we’re going to have to let you go.
We want to win this contract without having to compete for it.”

“That’s ridiculous,” I said, my voice rising
in indignation. “As I’ve mentioned to you before, this agency
requires the contract be put out to bid. You’re firing me because
you don’t like the way the rules work?”

For a moment, I thought I’d saved my job by
presenting the truth of the situation.

“It’s finished, Olivia. The board has made
its decision,” he said. “We certainly appreciate your efforts, but
we need someone more
dynamic
, because this contract is very
important to us.”

In the days that passed, I worked hard to put
that unfortunate call behind me. Olivia Shepherd Consulting had a
full roster of clients. As a private consultant to individuals and
companies with specific political problems, I had a number of other
projects already on my plate.

In fact, before I could dwell too much on
what had happened, I received a call asking me to interview for an
opportunity to represent a large foundation based in San Francisco.
The organization had an endowment in the billions and supported
most of the arts and cultural institutions in the region. Anyone
turning on a public broadcasting station has seen the foundation’s
name roll past with heartfelt thanks for their generosity. The
committee planned to interview several candidates, and assigned me
a thirty-minute slot to present my credentials.

Truthfully, I felt somewhat annoyed at not
being asked outright to represent the group. I’d done work for a
number of the beneficiaries of their grants, and felt that the
foundation should have known immediately that I was the right
person for the job. Still, I spent the requisite time reviewing the
organization, its structure, priorities and board of directors.

When the day of my interview arrived, I was
prepared, a binder of information and a list of questions to ask
tucked into my briefcase. Nevertheless, the weather that day seemed
to conspire against me. Rain fell ceaselessly, and by the time I
left for the appointment in the afternoon, the streets were
flooded. A fierce wind was blowing, rendering my umbrella useless.
It was not long before my leather pumps were drenched down to the
soles of my feet. The pant legs of my navy suit, which I had picked
up from the cleaners the day before, were soaked, weighing down my
steps.

As I trudged toward the foundation’s door,
the appointment was beginning to feel more like an obligation than
an opportunity. Yet, despite my misgivings, I managed to get
through the first round of interviews, feeling good about my
rapport with the committee.

On the day of my second interview, I walked
out of the house with no binder, no power point presentation, and
no plan at all for how to secure the job. I had convinced myself
that the second interview was a formality and that I would easily
convince the foundation’s executive committee to hire me to
represent them.

As it turned out, I was profoundly mistaken.
When I walked into the conference room for my appointment, an
assistant asked for a copy of my presentation so it could be loaded
onto her laptop. I replied somewhat cavalierly that I had no
presentation and would be improvising my remarks. From the worried
look on her face, I should have known that I was not taking things
in a promising direction.

While I made it through the second interview,
it was not a pleasant forty minutes. I’d come to see the committee
carrying nothing but my sense of entitlement. The committee clearly
had expected something more substantial.

Afterwards, I tried to convince myself that
the fact that no one had called me for two weeks didn’t mean
anything. These are busy times, I reasoned. And although I had
other work to keep me busy, something was gnawing at me. In the
weeks since that first horrible phone call, I had begun to feel off
balance. I seemed to be missing my former connection to my clients.
I became argumentative, when I should have been a peacemaker. I was
passive, when I should have spoken up. Nothing seemed to satisfy
me.

Before me was a shelf full of trophies. I had
won dozens of awards for the witty, pithy phrases and ideas I’d
dreamt up for my clients. Work that had won me accolades from my
colleagues. I was successful. I had the respect of my peers. I had
savings stored away in a bank account. But something definitely was
not right. I could still hear the words in my head: “We need
someone more
powerful
.”

It was time to visit my best friend Lily to
get some perspective. Lily’s office is on the sixth floor of San
Francisco’s Main Library. She has a view of City Hall from her
window. My offices are nearby on Van Ness Street, also close to
City Hall, where I conduct a lot of work for my clients.

“What do you think he meant?” I asked,
seating myself in her office as she typed away.

“Why are you obsessing about this?” Lily
asked, her fingers flying across the keyboard. “People will say
anything to get off the phone. Maybe he was nervous. You don’t fire
someone who for years has been your consultant over the telephone.
He had to know that was tacky. He was probably at a loss for
words.”

Lily Prescott manages San Francisco’s library
branches. San Francisco is comprised of a rich urban quilt of
different neighborhoods that crisscross the hills and valleys of
the city. Tucked into each of these distinct villages is a library
branch. The branches, some built early in the 20th century thanks
to the generosity of Andrew Carnegie, are teeming with people at
all hours of the day and night.

I met Lily a few years ago when we were
neighbors in an apartment building near the waterfront on the
Embarcadero. I had returned to San Francisco from Washington, where
I’d worked as a press secretary to a member of Congress. Lily came
from Portland, where she had worked as a children’s librarian. We
were both living in small studio apartments until we could find
more permanent homes. Eventually we both left the building; I moved
into a small house in the Inner Sunset District my grandmother left
me when she died, and Lily found a condominium in the Mission. Our
time on the waterfront was limited, but our friendship stuck.

“I agree that it’s tacky to fire someone over
the telephone, but he meant the words he used…
powerful,
dynamic
,” I said, grabbing a few almonds out of a bowl on her
desk.

“Olivia, what’s done is done. You need to
focus on something else. Maybe you’d like a new book to read. Tell
me what you would like. I’m sure we have a copy.”

“Lily, why is it that the library always
seems to have the exact book I want? I must like titles that
interest no one else.”

“We have a very well-stocked library,” she
said. “And you seem determined today to find fault with
yourself.”

“What about the foundation?” I asked, trying
to avoid a discussion about me. “That should have been my project.
Instead, they hired Stoner Halbert.”

Lily shifted uncomfortably in her chair.

“I heard that he might also have been hired
to… well, to pick up where you left off with your last client.”

“You heard that?” I choked. “That’s not
something you hear. What’s the real story?”

Lily stopped typing and looked over at
me.

“I saw them together at City Hall. I suspect
he had an appointment to see if he could persuade the department to
forgo soliciting bids and just award them a sole-source
contract.”

“And how long were you going to wait before
telling me this?”

Kiss Me, Kate by Tiffany Clare
Booty for a Badman by L'amour, Louis - Sackett's 10
Shetland 05: Dead Water by Ann Cleeves
Effortless With You by Lizzy Charles
The Levant Trilogy by Olivia Manning
The Available Wife by Pennington, Carla
A short history of nearly everything by Bill Bryson
The Queene's Cure by Karen Harper
Ha'penny by Walton, Jo
Legends of Luternia by Thomas Sabel
Our partner