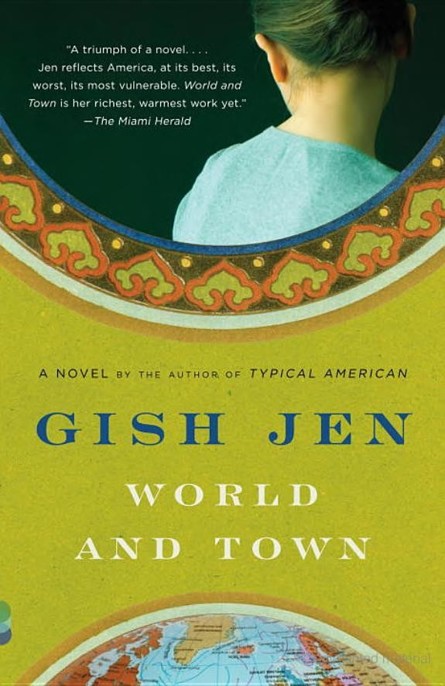 Mona in the Promised Land

Copyright © 2010 by Gish Jen
All rights reserved. Published in the United States by Alfred A. Knopf, a division of Random House, Inc., New York, and in Canada by Random House of Canada Limited, Toronto.

This is a work of fiction.
Names, characters, places, and incidents either are the products of the author’s imagination or are used fictitiously. Any resemblance to actual events, locales, or persons, living or dead, is entirely coincidental.

The American attaches himself to his little community for the same reason that the mountaineer clings to his hills, because the characteristic features of his country are there more distinctly marked; it has a more striking physiognomy.

Although the eye is the first stage in vision, remember that it is actually the brain that “sees.”

With our thoughts, we make the world.

Hattie I: I’ll But Lie and Bleed Awhile

Sophy: How They Even Got Here

Hattie III: The Pride of Riverlake

It’s the
băi shù
you’d notice most—the thousand-year-old cypresses—some of them upright, some of them leaning. And their bark, you’d see, if you visited—upward-spiraling, deeply grooved, on these straight trunks that rise and rise. They look as though someone took a rake to them, then gave them a twist, who knows why. Just having that idea about what made a fine tree, maybe. And jumbled up at their feet: acres and acres of grave mounds. Not one succeeding the next, in orderly rows and avenues with each inhabitant duly lined up and noted, but rather newer mounds piled up, willy-nilly, on top of others, so that as far as you could see it would be Kongs, Kongs, Kongs! All of them descendants of
Kŏngzi—
Confucius. Even now, at age sixty-eight, it is something for Hattie Kong, American citizen, to recall. Two thousand years of relatives, plopped down to rest in a single old forest
.

Said forest lying in the town of Qufu, in Shandong province, in China—not far from where Hattie grew up, and yet a world away. For Hattie grew up in Qingdao, also in Shandong, but on the ocean—a port city. A cosmopolitan city, occupied by the Germans before the Japanese, and a city known therefore for its “charming Bavarian architecture” and for its beer, which its residents drink from plastic bags, with straws
.

Qufu is not about beer
.

Confucius’s mound, naturally, is the biggest of the mounds—maybe ten feet high—and the most distinct. It’s set off some from the others. There’s some stone this-and-that and scrub grass around it, but mostly it is an eminent pile of dirt. If you saw it in a natural history exhibit, you might think it a wonder of nature—something the termites made, bugs being so much more of a force than we give them credit for, and so on. Nothing could be more modest, or of this earth, so to speak. It was an anti-monument, really; who knows why Hattie’s mother loved to stop in front of it. But
yángrén
that she was—foreigner—she would pause, tuck her hair behind her ears, fold her hands, and then lower, with reverence, her blue sun hat. Never mind that she was no longer a missionary, but a Chinaman’s wife. Never mind that she had, as people so kindly put it, “gone native.” Standing there in her Chinese dress—and she would, of course, be wearing a Chinese dress—she would strike the same attitude she might have had she been standing in a church, and had not been disowned and disavowed by the civilized world
.

Until finally Hattie folded her hands, too, and said
, “Yes?”

(The dirt and grass were dusty, like the air and clouds and sun.)

Her mother frowned at first. But a moment later, the shade on her face drew up; there was a smile of light, and then—look—a real smile. “But of course not.” The shade came back down. Hattie’s mother hummed. Then Hattie and her mother dutifully joined the rest of the family in their grave sweeping and clearing, though—modern people
that they were—her mother and father were far more interested in Hu Shih and Darwin than in the Old Sage. Ritual! The Five Relationships! What a lot of hogwash it all was. Should women really obey their husbands as children obeyed their parents? And why could only male Kongs and their wives be buried in Qufu?

“
That is, if they had hair!” Hattie’s father would exclaim—Confucius, in his wisdom, having specifically banned from the family forest, the bald
.

Hattie’s mother shook her head. It was no better than what she used to teach at the mission school, really, if not worse. Worse! Still Hattie grew up dutifully sweeping the Qufu graves, too—every spring, on
Qīngmíng,
as well as on her ancestors’ birthdays and death days—until one day, when Hattie was fifteen, her father’s mother announced a solution to the problem of Hattie having to be buried elsewhere: She’d found some distant Kong cousins willing to marry their son to a
hùn xúe’er—
a mixed blood
.

“
Isn’t that good news?” finished
Năi-nai.
Her dry eyes that did not shine much anymore somehow shone; outside the latticed window, even the moon seemed to brighten, and the blue night clouds. And Hattie was glad to behold that brightening, even as she was relieved, a minute later, to hear her mother switch to English
.

“
I will not see her married off,” she said, as soon as
Năi-nai
left the room. “I will not.” People said she was growing more American all the time instead of less—so earnest—and now, as if to prove their point, her knuckle hit the table on “I” and “will” and “not.” She leaned forward, her wattley neck straining hard against her collar. “She has to have a choice.
”

Hattie’s father raised his smooth hand. Though his wife was the Westerner in the family, he was the one in Western clothes—pants and a shirt. He wore a length of rope for a belt, and answered in English
.

“
Excuse me. Teacher.” He spoke softly, as everyone could hear everything in their old house—and tuned in, too, of course. “I did not know today we have class.
”

Her mother did not even tell her that children, excuse me, did not speak to their fathers that way
.

“
You are siding with your mother,” she said instead—in Chinese, now, though not in the lispy, fat-tongued Qingdao dialect their family all spoke, but in Mandarin
.

Hattie’s father nodded. “I’m afraid of her,” he agreed disarmingly, speaking Mandarin, too—meeting his wife, as if on a bridge
. Wŏ pà tā.
He winked again, sitting back on his stool. They were partners still; they were forging something together. A little family
.

Family English lessons had gone up to five hours a day
.

And Hattie found herself having a sit in the Qufu graveyard. She had never done any such thing before. But one brown spring day she made herself a seat out of newspaper, set it in a far corner of the graveyard, and then sat herself down on it, with the aim of thinking things through
.

The graveyard was no help
.

For thine is the power and the hogwash
.

She stood up concerned mostly about the newsprint on her
pì-pì.

And yet, decades later, when she heard that the graveyard had been dug up, she found herself yelling in her sleep, Stop! But this was the Cultural Revolution; the Red Guards just went on, of course, not only robbing the graves, but stealing the very dirt in the mounds. And there are the villagers, helping—carting the soil out to the field. That soil being rich and unfarmed, after all. They replace the mounds with their old depleted soil—throwing the dirt in every which way, just to get rid of it. Heaping it however, wherever
.

Villagers Hattie’s family had thought they knew well—had thought they’d treated well—now
shamacr; qì téng téng.
Seething fit to kill. And there, too’s their handiwork: Thousands of years of tradition, destroyed. Even now, in America, Hattie sees the scene sometimes. The villagers with their trowels; the wagons shuttling back and forth as the old mounds are bitten up. In the side of each roundness, there are new ragged-edged chews. It’s sickening. Though underneath the ancient cracked surface, sure enough—look—there’s something rich and crumbly. Black. Fertile. Many years later, a
zŭ zhăng
will tell the Kongs who went where, that they might try to reconstruct the graves; Hattie and her brothers will hear about it from a great-aunt. In the meanwhile, there is so much dust in the air, the leaves of the trees look to have survived a strange storm. And there is the man whose idea all this was—a coarse man, in a new shirt
.

At least Confucius’s steles have been saved—“tombstones” they’d probably be called here, though they are bigger than that. Steles. They’re broken, sadly, but at least the pieces have been saved. And though this villager and that claims to have gotten hold of some bones, some poor ancient bones, the bones have only lasted days, people say, before disintegrating
.

Is that true? Did the bones really disintegrate, just like that? The former scientist in Hattie—the former researcher in her, the former biology teacher—can’t help but think, Hogwash!

Though, well, blessed be decomposition, if they did. Today for a couple of hundred yuan, Kongs can be buried in the family forest again. Yet here sits this bag of protoplasm still, mulling over those two thousand years in Qufu. A misogynist tradition, a gerontocratic tradition; and what an obsessive-compulsive, her ancestor, in truth
. If the mat is not straight, he does not sit on it.
A nut. Confucius did, to be fair, speak of sincerity, too, and humility. Integrity—what made a noble man. (There were no noble women, of course.) And as an important counterweight to ritual, human-heartedness
—rén.
Goodness, capital
G,
that was, which people were born with but, in his sensible view, needed training to hang on to; today Hattie, too, is in favor of people cultivating their
rén.
All that clutching of the past, though—all that resurrecting of ancient rites and texts, some say for his own purposes—was he not a kind of fundamentalist? A godless fundamentalist, but a fundamentalist nonetheless
.

Well, never mind. Hattie looks at herself in the mirror now and
sees her parents’ break with all that—with the old ways in general. It’s in her face: in her pale skin and flat nose. It’s in her straight hair (bright white now, and trimmed even all around, like a topiary tree). Thanks to her father, she is not as wrinkly as she could be—she has some of that Asian fattiness to her skin. And she has him to thank, too, for her tadpole eyes—or should she say her formerly tadpole eyes. What with her eyelid fat breaking down a little now, her eyes are actually growing rounder and larger all the time. (And of course, they always were, like her mother’s, hazel.) Not that this is what Hattie sees when she looks in the mirror. What Hattie sees, when she looks in the mirror, are her parents’ youth and hope, even as she feels the pull of all they pushed away. For what has there been to replace that old world, with its rituals and certitudes, its guide posts and goalposts? Where will Hattie be buried, when her day comes?

It’s a question, since her husband, Joe, had his ashes sprinkled from a hang glider, and her best friend, Lee, had hers dug into a peony bed. And since her closest companions these days—closer by far than her globetrotting son—are her dear dogs: Cato and Reveille and Annie, her puppy
.

Maybe she should be buried in the pet cemetery?