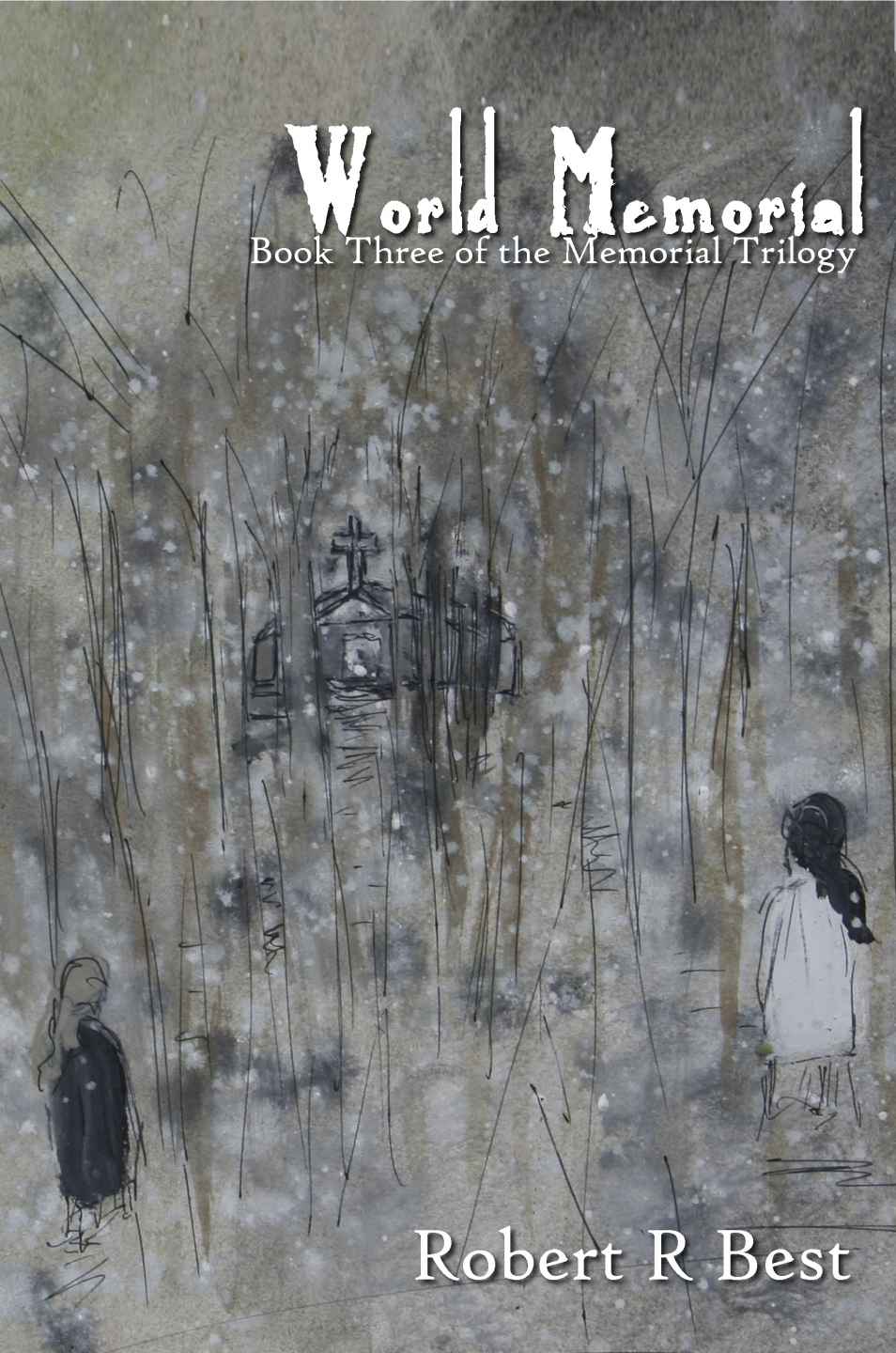 Without limiting the rights under copyright reserved above, no part of this publication may be reproduced, stored, or introduced into a retrieval system, or transmitted in any form, or by any means (electronic, mechanical, photocopying, recording or otherwise) without the prior written permission of the copyright owner, except in the case of brief quotations embodied in critical articles and reviews.

This book is a work of fiction. People, places, events and situations are the product of the author’s imagination. Any resemblance to actual persons, living or dead, or historical events, is purely coincidence.

Cover painting by Cara Crocker, who needs a website because her art is cool and the world needs to know.

She set the beetle down on the rock next to her where she’d formed a line of tiny black beetles. The beetles stood attentively, in perfect formation, their moving antennae the only indication they were alive.

The new one started to scurry away. She lightly tapped it with her finger and it stopped immediately, settling back into formation with the others, not moving. It was a young beetle, so she didn’t punish it.

How old was she? She looked up at the blue sky and pondered. The concept of age was new to Beulah. Her form appeared young, but she understood this to be an artifice. She’d existed far longer. She had memories of flying without shape, of knowing the insides of rocks and trees, of skimming over oceans as though they were nothing.

That was before the new ones came. The new creatures who had less hair and stood on two legs. They had hands, like Beulah, and were proving very clever. She liked the tools and shapes they made, the way they organized things around them. Beulah knew her form was somehow based on theirs. Like an echo. Or a response. Beulah found them fascinating, and liked to sneak into their camps to observe, frequently mistaken for one of their children.

She looked down at the line of beetles and smiled. Their little antennae waggled but they were otherwise still. Beulah lightly brushed the tips of her fingers across the line of antennae, giggling at the tickling sensation. The beetles showed no response.

Her eyes moved to the grass surrounding her. Every stalk stood straight up. It had taken her a while to touch each one, to get it to comply, but she liked the orderliness of it.

She frowned when she saw one stalk, far away, that remained slouched toward the ground. She stared at it, willing it to straighten.

She blinked in surprise, then smiled. So she
could
do it without touch, after all. A noise came from her left, followed by a small sigh. She looked to see a second young girl come around a tree and into the clearing. It was Sharon. Her sister.

Sharon grimaced past messy blonde hair, wrinkling her smudged face in dislike of something.

"What is it, Sharon?" said Beulah.

Sharon directed the grimace  at Beulah. "I ran into some of your favorites today."

"They aren't my favorites," said Beulah. "I like all the creatures."

"I've seen the way you watch them," said Sharon, walking through the grass Beulah had straightened. There was no care in her steps. Her bare feet mashed blades left and right.

"I spent forever organizing that grass."

Sharon paused. She looked at the grass around her, then back at Beulah. She rolled her eyes and resumed tramping.

"I don't like the new ones," Sharon continued as she stomped a path toward the rock. "I don't like how they rearrange things."

"You would," Sharon said, snorting. She reached the rock and sat next to Beulah. "And now we look like this." She held out her arms to indicate her body.

"I don't," said Sharon, dropping her arms and lifting a bare foot to scratch it. "It's too confining."

"I certainly hope we aren't like this long enough to get used to it," said Sharon, casting her eyes around the clearing. Beulah saw her smile as her eyes passed over the path she had stomped in the grass. It made Beulah angry. The sky grew a little darker.

Sharon suddenly snapped her gaze back to Beulah. She looked excited, even gleeful. "Hey, wanna see something fun?"

Sharon ignored that, hopping off the rock and tramping back into the grass. She got a few steps away then knelt down, ripping up grass by the handful.

"Be quiet!" yelled Sharon back, glaring at Beulah. A shudder went through the trees around them, the branches creaking and swaying in a sudden gust of wind.

"Fine," said Beulah, crossing her arms and letting the matter be. She could straighten more grass later.

Sharon resumed pulling up grass. It pained Beulah to watch, but she kept quiet. The beetles beside her stayed still and straight, comforting her. Soon Sharon had cleared an empty patch of earth.

Sharon rolled her eyes. "Be patient." She scanned the clearing. She saw something and ran for it, heading away into the brush. Beulah watched as Sharon pounced on something, cursing as she struggled with it.

"What are you doing?" said Beulah.

"This," said Sharon, standing with a squirrel in her hands. The squirrel struggled, trying to escape as Sharon walked back toward the empty patch of earth.

"You don't have to fight with it," said Beulah. "You could just tell it to be still."

"This is more fun," said Sharon, stopping as she reached the empty patch. The squirrel writhed around in her small hands. It raked its claws across Sharon's skin, but left no marks.

"I do," said Sharon. "Now watch." Sharon smiled and twisted the squirrel around in her hands. She gave a sharp, sudden tug in each direction. Beulah heard the squirrel's spine snap. The squirrel twitched and fell limp.

"Hush," said Sharon, kneeling and placing the dead squirrel on the empty patch of earth. "We aren't to the really fun part yet. Watch what I can do."

Beulah leaned forward and watched. Sharon dragged her finger in the dirt, drawing a circle around the squirrel. She sat back on her heels, watching expectantly.

"Just wait," said Sharon, not taking her eyes off the squirrel.

Beulah watched with her, then sucked in her breath in shock.

The squirrel twitched. It kicked its front legs around, clawing at nothing particular. It jerked its mouth open and closed, its teeth clicking and small hisses escaping from its throat.

"Sharon," said Beulah, an uncomfortable feeling settling in her stomach. "What have you done?"

The squirrel stood as best it could with a broken back. Its front legs pawed at the dirt while the back remained limp. It blinked its eyes at nothing. Beulah knew it was dead. Dead but still moving.

"Isn't it something?" said Sharon, beaming at Beulah. She looked thrilled, even proud. "I told the world to reject it. It won't go back to the earth like it should. It will walk around like that until I tell the world to accept it."

"Sharon stop this!" screamed Beulah. The trees shuddered again. A bright flash of light came from nearby.

The squirrel slumped down and was still.

"What did you do?" Sharon angrily stomped through the grass toward the rock.

"Nothing," said Beulah. "It was you doing that sick thing with the squirrel."

"I didn't tell the world to take it. You did something! What did you do?"

Beulah stood, glaring down at her from upon the rock. "
I
did something? What did
you
do? You tore up my grass and killed things. Get out of here!"

Sharon glared up at her. The trees shuddered, harder than before. There were no clouds, but everything grew darker.

Sharon sighed. The trees settled and the sky turned light again. She rolled her eyes at Beulah. “You always spoil everything."

She turned and stomped off through the grass. Beulah watched her go until she was lost among the trees.

Beulah knelt on the rock and looked down at her beetles. They were all dead, fallen away from the pretty line she had made.

For two years, eleven months and ten days, Parker Welch had tried to kill himself. Every attempt had failed.

For most of that time, he'd only tried his rifle, always aiming for his head. Always trying to jam a bullet in his brain. It had to be the brain. He had to be sure he stayed dead.

Park sat on his couch and sighed. His thumb hurt from yesterday’s suicide attempt.  He felt faintly embarrassed that all he’d managed to hurt was his thumb. Mostly he felt pissed off.

Park heard movement in the backyard. He ignored it, swearing softly to himself and pulling his coat tighter across his body. The makeshift wood stove he'd built in one corner of his trailer did little to combat the bitter cold.

Every now and then he caught a whiff of himself. He didn't care. He knew he smelled better than what was in the backyard, regardless of the cold.

He shut that line of thinking down. Hard.

The violent wind outside shook the pieces of duct tape stretched over multiple holes in the walls. Park had made the holes with his rifle.

It would go like this. Park would sit on the couch with the butt of his rifle against the floor. He would lean forward and put his forehead against the barrel. He would reach down and pull the trigger. The first few times he’d hesitated. After the fifth or so attempt he wasted no time.

And every time, every fucking time, the gun would fail to fire. It didn't jam. It just failed to go off. He'd click the trigger again and again to no avail. Finally, in frustration he would pick the thing up and fire at the wall. The gun would then work, blowing a hole through the side of his trailer. He'd stare at the hole, feeling like a damn fool, then turn the gun back on himself.

It happened every time he tried. He tried different angles, different positions. Nothing helped. When the rifle was aimed at his head, nothing. When he pointed it anywhere else, bang.

Death from a Top Hat by Clayton Rawson
Lie with Me by M. Never
What Is All This? by Stephen Dixon
The Drazen World: LUST (Kindle Worlds Novella) by Lola Darling
Chain of Lust by Lizzie Lynn Lee
the Savage Day - Simon Vaughn 02 (v5) by Jack Higgins
Easy by Dahlia West
Change of Heart (The Flanagan Sisters, #2) by Claire Boston
Secrets of the Demon by Rowland, Diana
Something Wicked by David Roberts
Our partner