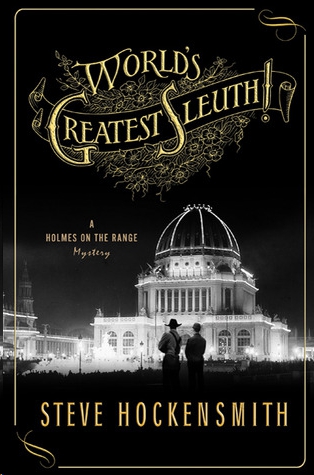 It has come to my attention that certain people believe the late, great Sherlock Holmes to be a mere fiction—an invention of some yarn-spinning scribbler like myself. This is scandalous, slanderous, preposterous, and just plain dumb. Mr. Holmes, though no more, was a real man, as solid of flesh and bone as am I myself. I’m happy indeed to live in a world that could accommodate such an extraordinary individual as he, and it’s difficut to imagine why anyone would show any reluctance to join me there.

THE BEARDED MAN
—a man with a beard

THE OTHER BEARDED MAN
(
A.K.A. THE UNBEARDED MAN
)—another man with a beard (sometimes)

THE OTHER OTHER BEARDED MAN
—another other man with a beard

EVERYONE ELSE
—you’ll see

33. Two Bulls in the China Shop

Or, The Quick and the Dead

My heart wasn’t just
pounding in my ears as we ran. It sounded like I’d stuck my head inside a brass band’s bass drum halfway through a Fourth of July parade.

I didn’t slow my pace, though. Everything Old Red and I had dreamed of and worked at and suffered for these past months was on the line. Better to have my heart explode like an overstoked boiler than quietly break in two.

We rounded a corner and saw what we’d been searching for so frantically: a raised platform topped by a huge metal tank. Between it and us was a thick-packed crowd that numbered in the hundreds.

My brother slowed down.

“One side! Gangway! Sleuths comin’ through!”

Fortunately for both me and the bystanders in my path, folks listened. A lane cleared through the throng—at the other end of which I saw the Enemy charging toward that tank just like me.

Well, one of the Enemies, anyhow. We had so many just then, it was hard to keep track of them all.

“Oh, no you don’t!” I roared, somehow pouring on more speed.

He and I reached the steps to the top of the tank at the same time.

“Pardon,” I said, bumping him aside and bounding up the staircase.

“Go to hell,” the man said, leaping up to grab me by the tail of my long coat.

“My apologies,” I said, kicking backward into his chest.

“Fudge you,” he said (more or less), and he wrapped his arms around my legs, bringing the both of us falling flat onto the steps.

“Excuse me,” someone new said, and I felt the skirts said someone was wearing sweep over me from heels to head as she walked up my back and then carried on up the staircase.

“Feh,” someone not-so-new said, and first the Enemy and then I oophed as my brother tramped over our backs with a far heavier step than the lady.

I got to my feet before anyone else could use me as a stepping-stone.

I reached the top of the stairs half-expecting to find that my brother had tackled her, skirts (and propriety) be damned. Instead, I saw the lady on her hands and knees peering into a large round hole cut into the top of the tank. From it wafted a smell of cheese so strong I felt like I was drowning in Welsh rarebit. For a moment I thought it was the swoon-inducing odor that had given the lady pause, but rather than pinch her nose or simply faint, she nodded down at the black hole before her.

Old Red crouched down beside her, then plugged the hole—with himself. His legs he stretched out flat while his top half he dropped down into the darkness inside the tank.

“Yes, miss. It is,” my brother said with a sigh. “So long as you think it’s a dead feller facedown in cheddar.”

Or, Things Look Black for Old Red, yet Our Prospects Finally Brighten

That great writer, philosopher,
and (I’m guessing) lunatic Lewis Carroll once offered some fine advice for anyone interested in the art of storytelling.

“Begin at the beginning,” the King proclaims in
Alice’s Adventures in Wonderland
, “and go on till you come to the end: then stop.”

Yet wise as this approach might seem to be, it must be pointed out that neither Mr. Carroll nor his King was in the business of writing dime novels. I am. Which is why I’ve been forced to adopt my own credo.

To wit: Start with an exciting bit, jump back and rush through the beginning quick as you can, run through the exciting bit again (tacking on a few more for good measure), and wrap everything up before folks get bored.
Then
stop.

So now that we’ve got that (hopefully) exciting bit with the body out of the way, we can give Mr. Carroll’s method a go and begin at the real beginning.

On June 4, 1872, Mr. and Mrs. Conrad Amlingmeyer of Marion County, Kansas, were blessed with their fifth and, by all accounts, most beautiful child: a beaming bundle of joy they named Otto Albert, a.k.a. “Big Red,” a.k.a.
me
. Growing into a precocious boy who amazed all around with his intelligence, charm, and good looks, young Otto began his schooling at the early age of …

You know, I don’t think that “Begin at the beginning” business is as simple as it seems. What, for instance,
is
the beginning of the tale I have to tell? I suspect I’ve overshot it a mite.

In October of this year of Our Lord 1893, while the rest of humanity was marveling at the modern miracles on display at the World’s Fair, the Columbian Exposition in Chicago, I found myself marveling at something very, very different: the gag-inducing powers of goat stink. Depending on how you looked at it, I was either a guest or (my view) prisoner on a Texas Angora ranch, a place that couldn’t have been more odiferous had the primary livestock been chili-fed polecats. Yet escape had been impossible, as the other guest thereabouts—my elder brother Gustav, a.k.a. “Old Red,” a.k.a. (when he’s not around to hear me) “Chief Stick-Up-His-Ass”—was, at first, in no condition to travel and, later, of no mind to.

“And go where?” he’d say when asked if it wasn’t perhaps time to mosey on.

“Anywhere!” being my usual reply.

He’d just stare through me, as if blind. I let him get away with this for a while because he had a pretty good excuse for it: He
was
blind. A close call with a load of exploding flash powder had left him temporarily sightless.

After two weeks convalescing on the ranch (owned by friends from his days as a Hill Country cattle hand), Old Red was prickly, mopey, and taciturn. Pretty much back to normal, in other words. He was still grousing about his eyes, but at least he could see well enough not to flatten his big nose walking into walls anymore.

While Gustav had done his healing, I’d passed the time (and dodged any goat wrangling) by writing up an account of our most recent experiences along the mystery-solving line. Eventually, I announced that the tale was complete and I’d be riding into town to mail it to my publisher in New York.

The timing of this pronouncement was met with considerable (and justified) suspicion, for my departure coincided with the first day of the fall shearing.

“If
I
can help shave them shaggy bastards, by God you can, too,” Old Red snarled. I would say he was giving me his patented Steely Look of Censure, but I can’t be certain. His eyes were hidden behind a pair of purple-tinted spectacles the local sawbones had given him.

I jerked a thumb at the shearing shed my brother had been shuffling toward when I’d given him the news.

“There’s plenty of hired help in there. I ain’t needed. And anyway, I’ve put up with enough ornery old goats in my time.”

Gustav’s frown deepened, but those sun cheaters again spared me the full brunt of whichever of his usual glowers, squints, and scowls he was throwing my way. (My best guess: Glare of Irritated Vexation #5, “The Constipated Bear.”)

Old Red snorted. “You don’t gotta test me. You know what I want.” He turned and headed for the shed again. “Ya damn goldbricker…”

I did indeed know what he wanted. But it was good to hear him ask for it, even in his cranky, roundabout way.

I was to look for the latest issue of
Harper’s Weekly
—and, more importantly, the new Sherlock Holmes story that it hopefully contained.

Before he’d been blinded, my brother had but one ambition in life: becoming a “consulting detective” like his hero, Mr. Holmes. Yet while he managed to sleuth us up plenty of trouble, detectiving
jobs
proved more elusive. So eventually I created my own, chronicling our amateur deducifications Doc Watson style. Hence my newfound career as a writer—and my relief to learn that Old Red’s interest in crime-busting hadn’t been blown sky-high along with the rest of him. Now I just had to haul him off his ass and get him back to doing something about it again.

I stewed on that during the long ride to the nearest city, San Marcos, but the only plan I could think up was to throw a lasso on my brother and simply drag him along behind me. Which had a certain appeal, actually. I just couldn’t figure out where to drag him
to
.

When I finally arrived at the postmaster’s office in town, I gave my new book a good-luck kiss, paid for postage, and wished my bundled-up baby Godspeed in its journey to my literary patron, Mr. Urias Smythe of Smythe & Associates Publishing Ltd.

The postmaster was a slovenly, sleepy-looking man who draped himself over the counter between us with such slump-shouldered droopiness I almost expected him to climb up and stretch out for a nap. When he glanced down at the return address on my package, though, his eyes widened, and for the first time he looked at me as if I was something more than an exceptionally boring dream.

Our Man in Camelot by Anthony Price
Blood and Chrysanthemums by Nancy Baker, Nancy Baker
Double Vision by Colby Marshall
My Warrior Fae by Kathi S. Barton
Heinous by Debra Webb
Third Base (The Boys of Summer Book 1) by Heidi McLaughlin
Bygones by Kim Vogel Sawyer
Bigot Hall by Steve Aylett
Listen Here by Sandra L. Ballard
Makeovers Can Be Murder by Kathryn Lilley
Our partner