Read Worth the Chase Online 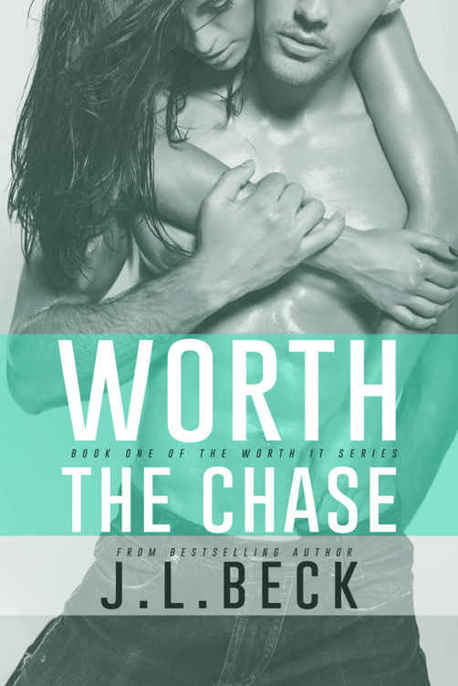 The hater’s will hate you even if you don’t give them something to hate. Keep being you.

Other Books by J.L. Beck

Coming Soon: Worth the Chance

I remember the very first time I laid eyes on him. My eyes lingered on his hard body, across his broad shoulders, and finally up to his handsome face. He had a body made for gripping, his abs were lick worthy and on full display for the entire female population of Auburn University. And believe me, they were all looking.

His eyes were a gun metal blue, like the ocean when the sun filtered through it, yet dark and full of pent up energy ready to be unleashed on anyone who got in his way. His chin was covered lightly with a dusting of stubble, his nose straight, his teeth white, and his hair had that just screwed sway to it. He looked like a GQ model. It was no wonder everyone including myself lusted after him.

“Gia. Focus on this shit in front of you. I’m here to tutor you, not have you check out my brother,” Chance, Chase’s twin brother, scolded me. My cheeks warmed in embarrassment as I brought my eyes back down to my notebook and away from Chase and the blonde that was stuck against him like glue.

The sun was shining through the trees and down onto us as the summer temps continued to rise. We were laying out on the front lawn of the campus, working on Advanced Biology. I had a test the first week of class, so I needed to be focusing on cell splitting and not removing my panties, allowing that asshole access to my…

“Gia?” Chance said my name again pulling me from my thoughts. At least I wasn’t being yelled at for staring at his brother this time.

“What?” I answered, lifting my face to meet his angry stare. Chance was gorgeous too, I mean after all they were twins. He had the same body as his brother, except his eyes were green and he had a softness to him that Chase didn’t exhibit. Oh and let’s not forget, you could actually look at him without him being an asshole solely because you glanced at him. He wasn’t full of himself like his other half.

“You need to focus. It doesn’t matter if you’re not looking at him, I can tell that you’re thinking about him which is the same fucking thing.” Chance’s voice was full of frustration. My mouth started to gape open all on its own. Shocked that Chance had come out about it so meanly, I closed my Bio book and grabbed my notebook. I didn’t know what to say. It was impossible to concentrate with Chase around. Attempting to “focus” with him around was like elementary school all over again. The only difference being I was a senior at college this time around and needed to get my shit together so I could graduate with a degree that mattered.

I had fought for my chance to go to college, I had begged and pleaded for a chance at this life, and I needed to stay on track. Even if being off track sounded so much more fun at this point in time.

“Focusing would be easier if he wasn’t everywhere you were,” I growled, narrowing my eyes at him. It wasn’t Chance’s fault that he had to bring Chase all over the place like he was a toddler. Chase just had a habit of causing problems, and Chance had a habit of making sure he stayed out of trouble.

“I see you’re finally done with the princess.” Chase butted in as he walked up, the blonde missing from his arm as I picked myself up off the grass. His voice was all gruff, his posture confident as if he was telling everyone ‘I’m better than you.’ Shaking my head, I raised an eyebrow at Chance showing him that this is exactly what I meant when I said it was hard to focus. My temper always flared when he came around, and before I could stop myself, I was speaking.

“You know my name is Gia. Use it, or don’t refer to me at all,” I sneered. He was gorgeous and a delectable specimen, but the second he opened his mouth I wanted to stab him in the eye with a fork.

I did want him, though, that I can’t deny, but I wanted him for one thing and one thing only. I wanted to know if he was just as good in bed as the rest of the girls on campus said he was. Aside from that, I didn’t want to listen to him speak once.

He tilted his head sideways at me, “Wow. I just heard Chance have to remind you not to stare. Seems someone was a bit distracted.” He mocked with a smile on his lips, one that kind of made me go weak in the knees, but at the same time made me want to throat punch him. Of course, he would change the subject. He was good at dismissing the things he didn’t want to hear or that didn’t work in his favor.

If he thought I was going to play into his hand, he was wrong. I turned on my heel away from him fully intent on heading back to my dorm. I had to be moved out in the next month for fall classes, which meant that I would be a woman on the hunt for a new apartment with my best friend, Taylor, who would be a freshmen this year.

“Wait! We need to meet up. I want to go over everything we studied this summer, especially the labs that you’ll be tested on the first week in class.” Chance’s voice stopped me from walking away, which caused me to turn back around and face Chase, who was now wearing a shit eating grin.

Hate him for all that he’s worth,
I told myself.
Don’t look at him like a piece of cake that you want to devour. No, look at him like he’s the reason you need to work off fifteen hundred more calories.

I swallowed the saliva that had started to form in my mouth just as I caught a glimpse of Chase smiling again out of the corner of my eye. A dribble of sweat dripped down his abs and my mouth popped wide open.

What were we talking about?

“Let’s meet up this weekend. Chase is having a party off campus, but maybe you can come over anyways and we can work on it?” Chance asked for what I assumed the second time, his eyebrow raised in questioning.

I bit my lip and nodded my head yes. I was going to have major whiplash after today’s meeting. I knew there was no way that I could handle going over to Chase and Chance’s house, apartment, mansion or whatever the hell they lived in to study. I would have to cancel.

“Alright, we’ll talk then. I’ll text you the time,” Chance responded as he bent down to pick up his books and papers, placing them in his bag. I gave Chase one more once over and then walked away, wondering what the fuck it was that I was doing. I had no reason to be lusting after someone like him. He was as far from the safe zone as it got. His demeanor alone caused my heartbeat to go into overdrive and my body to feel alive as if I hadn’t been truly living this whole time.

I knew better than to associate myself with him, he had bad written all over him. For God’s sake, my father was an FBI Agent! If he heard half the shit that I did away from home, he would probably force me to move back and finish my last year of college being locked away in my childhood room.

Coming to a halt and squeezing my eyes shut, I took in a breath.
Ugh, Gia just calm your tits. He will never find out. There is absolutely nothing to worry about
, I told myself as I opened my eyes and continued my walk across campus. I was just about where I needed to be when my phone started ringing extremely fucking loud.

“Fuck,” I huffed, struggling to pull the slim device from the pocket of my shorts. Taylor’s name showed across the screen and excitement filled my belly as I pressed the answer key.

“I’m so excited that I’ll be seeing you soon!” she squealed into the phone. This was her first year of college, a time where growing was something that she would truly experience. I was glad that I would be that one true friend here for her when she needed it the most. I didn’t have that my first year, hell I barely had that now, but in a few weeks we both would have something we’ve been missing since I left for college.

“I’m pretty sure that I’m way more excited. I have to start packing up my stuff at the dorm this week,” I confessed. I hated packing, anything that involved moving was something that I was against.

“Oh speaking of, I found a place for rent. I’m going to call the number on Craigslist first thing Monday. Hopefully, we can rent it. It’s close to campus and they’re offering the lower rooms in the basement. Two bedrooms with spacious closets, one bathroom, and our own laundry room. We’ll have to share the kitchen and living room with the owners, though.” A smile formed on my face as I crossed the grass to my dorm room. I slid my key into the lock gaining access into the building as Taylor filled me in.

“You’ve sure done your research. That sounds amazing. The only issue is price.” I hated to be the bearer of bad news, but I wanted to be realistic.

“They only want eight hundred a month.” She sounded just as shocked as I felt, so much so that I almost tripped walking up the first flight of stairs.

“Well shit. Then it’s a given, as long as everything checks out and they aren’t some serial killers, then of course we’ll take it.” My voice bounced off the empty hall walls as I jogged up another flight of stairs, keeping my eyes focused on every step as to make sure I didn’t actually trip.

“Yes, you bet your ass we will.” I could hear her moving around her bedroom and then her mumbling ‘I’m coming, Dad’ as the low speaking voice of my Uncle Devon filtered through the phone.

“Okay,” I said, saddened that our conversation had to end so soon. It had been three
horrible long years in time that we were separated. We’d grew up together, our parents like siblings, so not only did I consider her my best friend but a cousin as well. Being without your partner in crime for three years was a long time to miss someone, but we would finally be together again, doing what college kids did all across the country.

“Sorry. Dad wants to take me out to dinner. I’ll text you when I get home. Love you, bye.”

I pulled my phone away from my face just as I made it to my room.

I sighed into the air. There was no one here, no one to talk to, and no one to do anything with. I realized that the highlight of my day had already come and gone as I threw myself onto my bed. Now I was free to do nothing the rest of the afternoon.