Read Worth the Wait Online 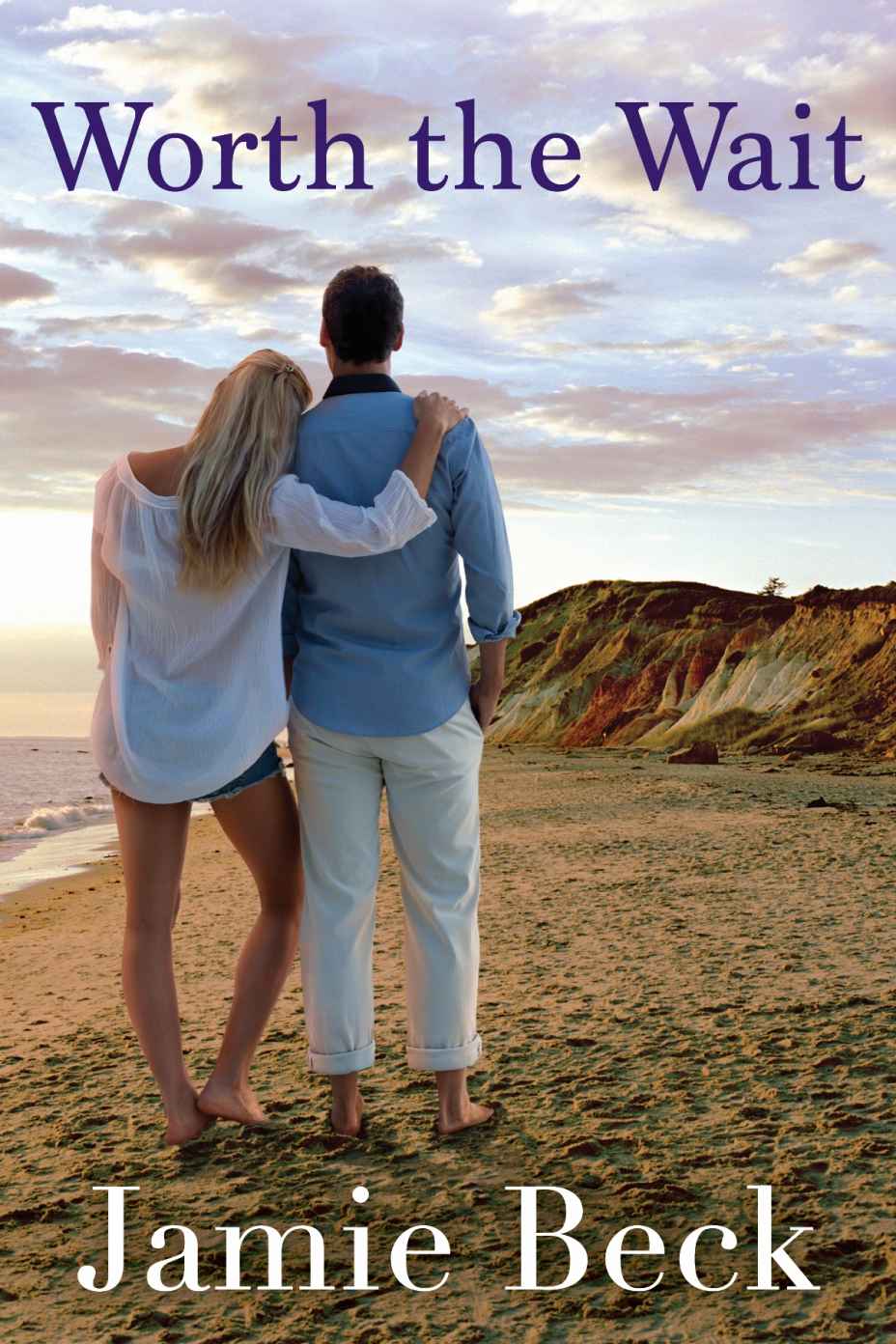 A
LSO BY
J
AMIE
B
ECK

For my parents and late stepfather. Thanks for always seeing the best in me.

B
y the time Vivi turned thirteen, she’d learned not to expect much from life. Tragic accidents could wipe out half your family and then drive your dad to live in the bottom of a bottle. Bullies could ruin a perfectly good day by picking on your cheap clothes or the awkward things you occasionally blurted out. Loneliness could sometimes wrap itself around you so tightly you could barely breathe.

But accepting the plain truth of it—that life is hard—also helps you enjoy the little things more. To appreciate the small moments, like eating raw cookie dough right from the yellow package, or waking up with your old dog curled up on your bed, or making a new friend when you simply dreaded the first day of eighth grade in a new town.

That last fluke was how she came to be sitting at Cat’s kitchen table, at her first-ever sleepover, concentrating on the final strokes of a sketch she’d been asked to draw. Cat had been bragging to her mother about Vivi’s artistic ability, and Vivi didn’t want to disappoint her new friend.

She took one last look at the image of the ceramic rooster she’d copied before holding up her work for inspection. Mrs. St. James’s eyes widened as her hand flattened against her breastbone. “Oh, Vivi, this is wonderful. May I keep it?”

“Sure.” Vivi nodded, delighted by the praise.

Cat passed the bag of Oreos back across the table. Vivi snatched three more and sat back in her chair. Contentment washed through her, prompting a happy sigh.

But her peace of mind fell apart as soon as Cat’s two older brothers burst through the kitchen door, both sweaty from lacrosse practice. Although Vivi hadn’t yet met them, she knew David was the brainy high school senior, Jackson the rowdy sophomore.

Vivi noticed David kissed his mom hello on the cheek before he went to the stove, lifted the lid off a pot, and sniffed its contents.

Jackson flashed a friendly smile when introduced to Vivi, but then immediately turned his attention to Cat. “I need to steal you for a sec, sis.” He jerked his thumb toward the living room.

Cat rolled her eyes and leaned toward Vivi. “What do you want to bet he’ll ask to
borrow
my allowance tonight because he already spent his?”

Vivi shrugged, completely out of her depth. Since her mother’s and brother’s deaths seven years ago, she had no siblings or semblance of normal family life to go by. She must’ve been frowning at her thoughts when she dunked another cookie in her milk, because David asked, “Something wrong with those Oreos?”

“N-no.” She swallowed—hard. He was more handsome than any boy should be. Honestly, it really wasn’t fair to all the other boys. Or the girls.

“David, look at this drawing Vivi just made. Isn’t she gifted?” Mrs. St. James stood up, offered her seat to David, and began fixing him a bowl of paella.

David studied the sketch and then scanned Vivi from head to foot—which didn’t take long—apparently cataloging the pink streaks in her hair, her Hello Kitty pajamas, and her scrawny limbs.

A grin curled the corners of his mouth. “This is really good. You must take art lessons.”

His intense eyes seemed genuinely curious, which left her terribly flustered and overheated. Still, she couldn’t look away.

“Not really.” His gaze riveted her to her chair. Did he really want to talk to her? “I mostly teach myself by reading books or renting videos from the library. Sometimes I stay late after school with the art teacher.”

“Impressive.” He looked at her with respect. “Do you paint, too?”

Vivi sat up straighter, eager to discuss her favorite subject with him. “Yes, and I do collage. Sometimes I work with clay, but I’m not very good yet. I take photographs, too.”

“You just moved to town, right? You should check out Silvermine Arts Center, a top spot around here for any kind of art class. It’s just over the border, in New Canaan.”

“Sounds awesome.” Vivi pasted a smile on her face even though she knew she’d never set foot inside that studio. It sounded expensive. More importantly, it would require her dad to get involved, and that just wouldn’t happen. She had taken care of him since the accident, not the other way around. It was probably just as well because, on the rare occasions he made an effort, he usually embarrassed her with his drinking.

David tilted his head, narrowing his eyes slightly, as if he could see her thoughts. Then his expression lightened. “Do you do portraits?”

“Not very well.” Vivi grimaced and then popped another soggy Oreo in her mouth, growing increasingly disoriented by his attention.

“I’ll be the judge of that.” He pushed the pad of paper toward her and then leaned forward, elbows on the table. “Draw me.”

“Now?” Half of her cookie plunked back into the milk.

“Why not?” He twisted in his chair and tipped his chin up. “Profile?”

Consumed by an exhilarating mix of panic and fascination, she ignored the mess in her glass and picked up the pencil. “No profiles.”

David turned back toward her and sat motionless. His eyes glanced at the paper.

“Eyes up,” she instructed, and when he looked at her, he smiled.

Her fingers tensed at first, her initial marks too heavy, but within a minute or so, she became absorbed by the project—for the most part, anyway. Granted, she couldn’t ignore the way her heart kicked an extra beat every time they made eye contact, which, under the circumstances, happened pretty often.

Mrs. St. James placed the bowl of paella in front of him and then quietly left the kitchen. David set the food aside and continued watching. Several minutes later, Cat returned and plopped down in the chair beside Vivi. “Why are you drawing David?”

“Because I asked her to,” he replied before Vivi could answer. “Shhh. Don’t distract her.”

“Seriously?” Cat heaved a melodramatic sigh while looking at Vivi. “You don’t have to draw him, you know.”

“I don’t mind.” In fact, Vivi rather liked the good excuse to memorize every detail of his perfect face.

He winked at her just then. Had he read her mind again?

Heat raced to her cheeks.

“I’ll go find something for us to watch on TV.” Cat stood, peering over Vivi’s shoulder. “Come find me when you’re done.”

After she left, David asked, “How do you like Wilton so far?”

“It’s nice . . . prettier than Buffalo.” Darn it, she’d messed up his jawline. She erased a bit and concentrated on the page in front of her.

“Does sticking the tip of your tongue out of the corner of your mouth help you draw better?” David teased in a good-natured way.

Wincing, she sucked her tongue back inside her mouth and glanced at him. “Apparently.”

He crossed his arms, chuckling, and continued to watch her work. Within another few minutes, she was finished. She examined the image, wearing a scowl. Portraits were a
lot
harder than ceramic roosters.

David reached across the table and tugged at the pad. “Let me see.”

Reluctantly, Vivi released it and watched for his reaction.

“It’s amazingly good for such quick work.” A slow grin spread across his face as he intently studied her drawing. “You made me much better looking than I really am.”

“You did, I think.” He tore the drawing from the pad and set it to his left before sliding the previously discarded bowl closer. “Thanks.”

Vivi reached out for the picture, but he swatted her hand. The contact sent tingles up her arm.

“That’s mine.” He then spooned saffron rice into his mouth. “In fact, sign it so someday I can prove I knew you when.”

Although Vivi knew he was kidding around to be nice to his baby sister’s friend, she loved every minute of his undivided attention. Unfortunately, it lasted only seconds longer, thanks to Jackson.

David glanced at the clock with surprise. “Sorry,” he said to Jackson. “I’ll be quick.”

He set his bowl in the sink and then took the drawing from the table. “Nice meeting you, Vivi. Thanks for this.”

“I think Cat is in the family room waiting for you,” Jackson told Vivi as he followed David out of the kitchen.

“Oh, thanks.” Vivi meandered out of the kitchen, feeling a bit light-headed.

She sank onto the sofa cushion beside Cat, who had chosen the movie
Sabrina,
starring Harrison Ford. Vivi couldn’t remain interested in the story, because her mind kept fantasizing about seeing David again at breakfast.

Oops
. Vivi covered her private thoughts with some version of the truth. “I’m happy you invited me over.”