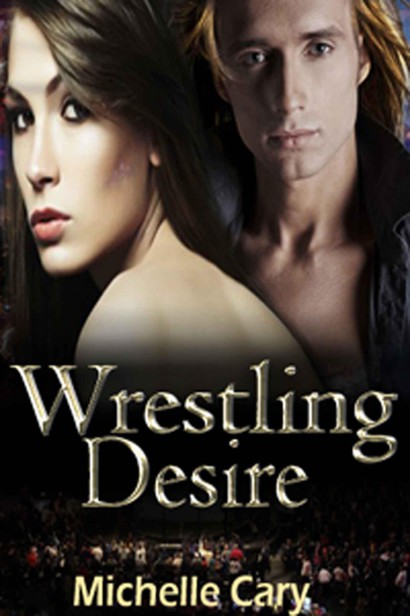 Where in the hell are they?  Emma Cruise looked at her watch and then checked her schedule for the third time.  She closed her eyes and tried to take a calming breath.  No matter how many times she stressed the need to be on time at least one person always
managed
to screw up the schedule.  Today’s offenders appeared the troublesome tag team Devious.

Why was it so difficult for people to follow the simplest of direction?  Her job, and her life for that matter, was difficult enough without people adding to her stress.  She opened her eyes and turned back to her work.  Days like today reminded her that while she wasn’t one of the Vixen wrestlers that didn’t mean she couldn’t feel the body-slams life sometimes handed out.

She’d just started
going over her to-do sheet, checking it against the latest updates from the production meeting, when Jill interrupted.
T
emptation to
wave off her younger assistant and continue working
ended with
the excitement in Jill’s voice.  She looked up and noted the grin on
her assistant’s
face.  Curiosity piqued
,
Emma set her clipboard aside. “What do I have to see?”

“You’re not going to believe it, but somebody put a ferret in the women’s locker room.”

Both amused and aggravated in the span of a second, she glanced toward the ground as grin quickly swept across her face and she rubbed at the beginnings of a headache.  It was a headache most likely caused by a certain tag team who refused to keep themselves out of trouble.  “Are there cameras filming?”

Jill gave a nod.  “One of the cameramen just happened to be coming back from catering when some of the women started screaming.  Now there’s this huge crowd surrounding the locker room
and
some of the crew
work
to catch the animal.”

“Uh huh.” Emma let out a sig
h
and motioned for Jill to lead the way.  “Don’t you find it just a bit odd that the cameraman had his equipment with him while he was eating?”

Jill gave Emma’s question a shrug.  “I didn’t really think about it.  Do you think this is a setup?”

“I’d bet money on it.”
No doubt this
stunt was some promo being filmed for later use on the show, but
someone failed to tell her
anything about it
. “
A
nd I’m sure Holt and Garrett ha
d
something to do with this,” she mumbled as they neared the scene of the crime.

The three-deep crowd roiled about the door, fighting for a peek. Emma elbowed her way through the crush to get to the front
.
“Excuse me, management coming through.”  She stopped in the doorway in time to see a crew member with said rodent in hand and the Extreme Ultimate Wrestling’s General Manager Mark Campana examining the animal.   It took only a moment for everyone to spot the trademark devious smiley face painted on the side of the animal.  Mark’s expression
changed
from curiosity to rage.  “D-E-V-I-O-U-S!”   Yeah, they were definitely taping for the show and somehow she’d been left out of the informational loop.

Frustrated with the interruption and intent on returning to her previous task, Emma shook her head and
inched
her way back through the crowd.  It wasn’t so much she minded the pranks.  They were all part of the storyline for the troublesome tag team
and they kept life interesting, but the stunts threw a wrench in her scheduling. Having a head
s
-up prior to the event made a huge difference in keeping everything running smoothly.
As b
ack
stage coordinator
,
her job title spanned several tasks which included keeping the backstage running smoothly at all times.  It wasn’t normally an easy task.  Throw in a curve ball like the one Devious just pitched and she’d spend the next hour trying to get things caught back up.

She’d no sooner turned the corner when the tag team in question fell into step on either side of her.  “Hey Gorgeous,” Holt Hendricks dropped a large arm over her shoulder.  “Whatcha up to?” His deep voice rumbled through her body like an earthquake making her insides instantly quiver with desire.

Standing a little over six feet tall, with long blond hair, piercing blue eyes, and a body girls drooled over, Holt ‘The Heart
t
hrob’ Hendricks was EUW’s sexy boy.  Fantastic as a singles wrestler
,
he’d made a name for himself early and
continued to prove
his ability in the ring time and again.  Of course with a stellar win/loss record and dashing good looks Holt also
carried
an inflated ego.

At least that’s how it appeared to those who didn’t know him.  In truth Holt could be very sweet, considerate
,
and caring when he wanted to be, which made her situation even more difficult.  While she was more than a little attracted to him, his reputation with the l
adies combined with her brother
Derek’s hatred for Holt, made keeping her distance a necessity.

She ducked out from under his arm and did her best to glare at him.  “I’m trying to do my job, which
is
hard enough without having to keep track of you two juvenile delinquents.”  She stopped and angled her hands on her hips.
“Why wasn’t I informed of that little stunt you two did for the promo?”

Holt shrugged and exchanged looks with his partner in crime. “We thought Gene or Mark told you.”

“Well they didn’t.” She turned on her heel and continued to walk toward her work station.  “I bust my ass to keep this roaming circus running like a well-oiled machine.  When I’m not informed of stuff like promo tapings and such, it throws my schedule out of whack.”

“Look.” Garrett stepped in front of her
,
blocking her path.  “We didn’t mean to knock you out of whack.  Honestly, we thought Mark or somebody would have told you.  From this point forward we promise to tell you ourselves before we tape a segment that’s going to disrupt the backstage workings.”

Emma arched a brow.  “How about you two try to behave and not disrupt backstage workings at all?”  She sidestepped Garrett and continued on her way.  “Now that would be a novel idea.”  She raised he
r
hand and wagged a finger at them as she walked toward her work station.  “You two are both pushing thirty, yet you both act as if you’re still teenagers.”

“You’re only as old as you feel, Emma baby.”

Garrett’s statement stopped in her tracks and she turned to look up at
him
.  “Emma baby?”  It didn’t matter if Garrett
was quite a bit bigger
. No way would she allow anyone to talk to her like that.

Holt immediately jumped between them and placed his hands up in mock surrender.  “Um…what my misguided and somewhat idiotic friend is trying to say is that we’ll make sure to keep you informed of all future pranks.”  He clasped his hands together in prayer. “Please don’t kill him, Emma.  I need him for our match tonight.”

Emma couldn’t stop the smile
pulling
at her lips.  The sincerity in his look and the desire to keep her happy seemed genuine and she relented as she shook her head at them.  “You’re a complete nutcase, you know that?”

He grinned and dropped his hands.  “That’s true, but admit it Em, that’s what you love about me.”

That wasn’t the only thing she loved about Holt.  “Don’t you have someplace to be?”

He chuckled and the rich warmth of his voice filtered through her system causing goosebumps to form on her skin.  “You would know.”

Remembering her lis
t,
she quickly checked her sheet.  “It’s time for you both to head to hair and makeup.”

“Then we’ll get outta
your
hair and let you get back to work.” Garrett turned to go
,
but Holt remained in place.

“Admit it, Em.  Deep down you thought our prank was funny.”

She rolled her eyes skyward and gave him a small smile.  “Maybe it was a little funny.”  She pointed a finger at him.  “If you tell anyone I said that I will emphatically deny it.”

He snagged her hand, turned it over and placed a soft kiss directly in her palm.  “I swear, mum’s the word.”

Electricity zinged up her arm and she swallowed audibly.  He arched a brow and she couldn’t help but wonder if he’d heard her.  He straightened his spine so that he once again towered over her five foot seven inch frame, then lifted a hand and brushed a knuckle along her cheek.  “Have dinner with me, Emma.”

In the blink of an eye the air around her grew heavy with desire and she barely resisted the urge to turn into his touch.  She stared up at him, noting the passion and sincerity in his gaze.  Her heart screamed for her to say yes, to go for what she wanted and damn the consequence.  Nervous energy filtered through her body and she gave him an amused laugh as she struggled to maintain control.  “You don’t give up do you?”

His grin returned and he allowed his hand to fall away, coming to rest at his side. “Never.”

“No,” he corrected. “I know you won’t, but that’s okay.  Tomorrow is another day.”  He turned and walked away, leaving his subtle warning lingering over her head.  He had no plans of stopping his pursuit of her anytime soon.  Why did that knowledge send a giddy thrill zinging through her system?

“I don’t understand why you continually tell him no.”  Jill’s voice came from behind her and Emma turned to face her friend.  “The sexual tension between you two is off the freaking charts.”

“Yes it is.  My God, Emma, it’s obvious to everyone who has seen you two together that you’re attracted to each other.  So what’s the problem?”

Emma glanced over her shoulder to see Holt disappear around the corner.  “Okay, maybe I do like him, but the problem is Derek.”  She turned back to face Jill.

“What does your brother have to do with this?”

“He hates Holt and everything he stands for.   Getting involved with Holt would complicate my life in ways you can’t begin to imagine.”

“Well.” Jill shrugged.  “Personally I think if you like somebody enough then it’s worth risking the complications to find out where it may lead.”

“I can’t go against Derek’s wishes,” Emma argued.  Derek wasn’t just her older
brother.  He was her protector, h
er hero
,
and his approval of her meant everything.  She could just imagine the fall out that would come from such an act.

“Well, Derek is wrong for asking you to, Em.  What if Holt’s the one?”

Emma frowned.  “The one what?”

Jill cocked her head to the side and shot Emma an exasperated look.  “What if he’s the one you’re meant to be with?  What if he’s your soul mate?   And what if because of some misguided loyalty to your brother you miss the opportunity to find true love?”

Uncomfortable, Holt shifted in his seat for the tenth time and glanced up at the still lit seatbelt light.  Sore and stiff from his previous night’s match
,
he couldn’t find any real relief from the discomfort.  Combined with his desire to see Emma he’d been antsy from the moment he’d sat down.

Garrett pulled the headphones off his head and looked over at him.  “You’ve been restless since we climbed on board. What’s your deal?”