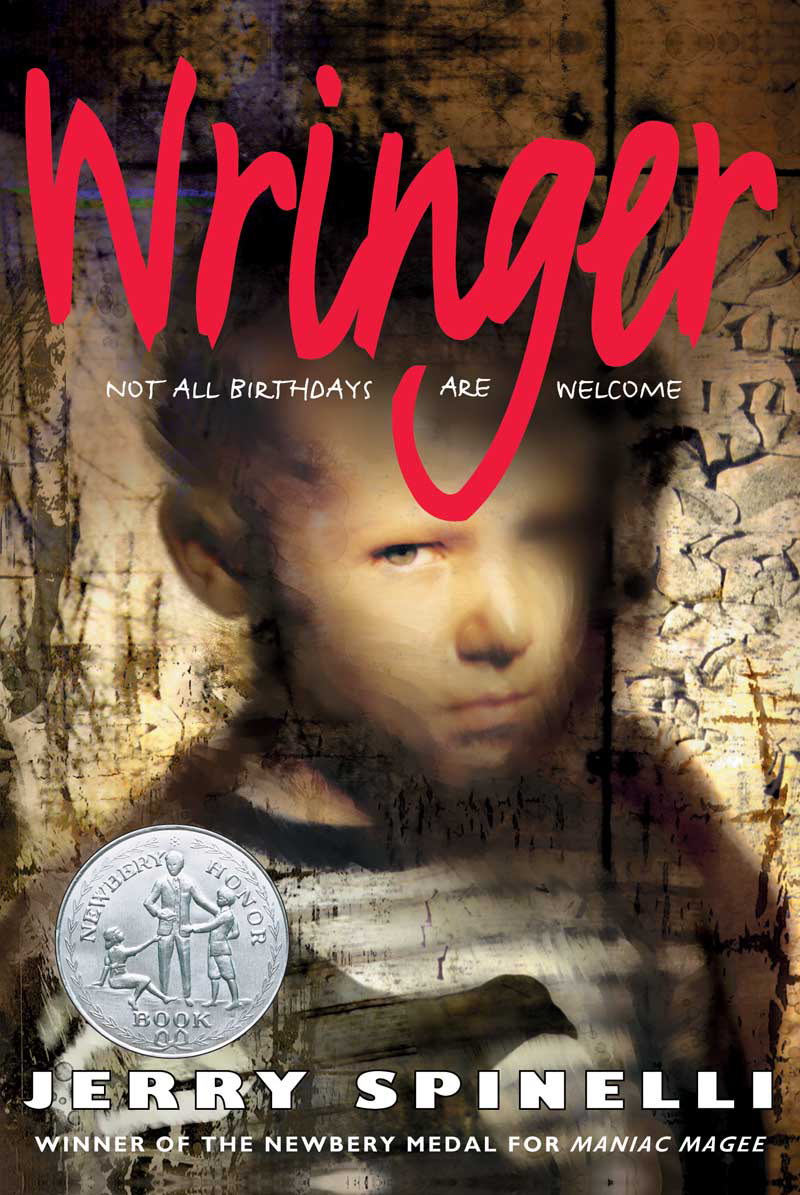 To Jerry and Helen Weiss

I am grateful to the following for help in writing this story: Steven and Silvia Hagopian, Tom Reeves, and Laura DeSimone

He did not want to be a wringer.

It was never meant to be a real party. “Justâ¦

They kicked the ball around for a while, then Beansâ¦

He caught up to them at the playground. They wereâ¦

“What happened to your arm?”

The following weeks were like a parade to Palmer, withâ¦

Palmer had attended his second Pigeon Day with Dorothy Gruzikâ¦

By the following year Palmer no longer cared to watch.

In his dream the pigeons came to town, not fiveâ¦

The bird walked in.

A pinch on his earlobe woke him. He opened oneâ¦

After dealing with his mother, Palmer turned his attention toâ¦

Palmer had never been to Beans's house. He had beenâ¦

Beans jumped to his feet, looked up. “Where?”

Treestumping had become popular among other school kids. Other boys,â¦

For much of his life Palmer LaRue had felt heâ¦

An hour later in his room with Dorothy, Palmer wasâ¦

Nipper was home that day, waiting at the windowsill. Butâ¦

Palmer had just finished supper on Monday when the doorbellâ¦

Palmer caught the weightless, foamy basketball. He turned it inâ¦

Although she insisted that she would be there right upâ¦

He awoke to Nipper pecking at his ear. And justâ¦

A bug crawled down the middle of his back. Heâ¦

He thought of not feeding Nipper. Of not letting himâ¦

Despite the heat, he slept with his window shut andâ¦

Whatever Henry told them they must have believed, for theyâ¦

It was as if he could smell into the future.

Until he found himself there, he had not been sureâ¦

He knows how it will end.

Other Books By Jerry Spinelli

WAYMER
âHundreds of sharpshooters in and around this rural community are cleaning their shotguns as they look forward to Saturday's 63rd annual Pigeon Day. Beginning at around 8
A.M
., participants who have paid a fee will each have the chance to shoot at ten to twenty pigeons as they are released from boxes.

Shooters are scored according to a point system that, at day's end, rewards the most accurate of all with the coveted Sharpshooter's trophy. Proceeds from the shoot go to maintain the community's 40-acre park.

Organizers said approximately 5,000 birds are acquired for the event. Some are purchased from local breeders, while others are trapped in big-city railroad yards.

The pigeons are placed in white boxes. Each shooter takes a turn firing at a series of birds as they are released individually by ropes attached to the boxes.

Most birds are downed. Many are killed instantly, some are wounded. All downed birds are retrieved by so-called wringer boys, who break the necks of the wounded and place all bodies in plastic bags. The bodies are then sold for fertilizer. A few birds manage to escape.

The shoot takes place in a festive, picnic atmosphere of barbecued chicken, water ice and frolicking children. Attendance last year was estimated at 4,000.

He did not want to be a wringer.

This was one of the first things he had learned about himself. He could not have said exactly when he learned it, but it was very early. And more than early, it was deep inside. In the stomach, like hunger.

But different from hunger, different and worse. Because it was always there. Hunger came only sometimes, such as just before dinner or on long rides in the car. Then, quickly, it was gone the moment it was fed. But this thing, there was no way to feed it. Well, one way perhaps, but that was unthinkable. So it was never gone.

In fact, gone was something it could not be, for he could not escape it any more than he could escape himself. The best he could do was forget it. Sometimes he did so, for minutes, hours, maybe even for a day or two.

But this thing did not like to be forgotten. Like air escaping a punctured tire, it would spread out
from his stomach and be everywhere. Inside and outside, up and down, day and night, just beyond the foot of his bed, in his sock drawer, on the porch steps, at the edges of the lips of other boys, in the sudden flutter from a bush that he had come too close to. Everywhere.

Just to remind him.

This thing, this not wanting to be a wringer, did it ever knock him from his bike? Untie his sneaker lace? Call him a name? Stand up and fight?

No. It did nothing. It was simply, merely there, a whisper of featherwings, reminding him of the moment he dreaded above all others, the moment when the not wanting to be a wringer would turn to becoming one.

In his dreams the moment had already come. In his dreams he looks down to find his hands around the neck of the pigeon. It feels silky. The pigeon's eye is like a polished shirt button. The pigeon's eye is orange with a smaller black button in the center. It looks up at him. It does not blink. It seems as if the bird is about to speak, but it does not. Only the voices speak: “Wring it! Wring it! Wring it!”

He cannot. He cannot wring it, nor can he let
go. He wants to let go, desperately, but his fingers are stone. And the voices chant: “Wring it! Wring it!” and the orange eye stares.

Sometimes he wished it would come after him, chase him, this thing he did not want to be. Then at least he could run from it, he could hide. But the thing never moved. It merely waited. Waited for him to come to it.

He flew down the stairs.

His mother waved him on. “Go, go. It's
your
birthday.
You
invited them.”

At the door he turned, suddenly afraid to open it. He did not want to be disappointed. “You sure it's them?”

His mother's eyes rolled. “No, it's my Aunt Millie. Open it.”

He opened the doorâand there they were! Beans. Mutto. Henry. Three grinning faces. Shoving wrapped gifts into his chest. Storming past him into his house, Beans bellowing, “Where's the grub?”

Palmer stayed in the doorway, fighting back tears. They were tears of relief and joy. He had
been sure they would not come. But they did. He wondered if they would give him a nickname. What would it possibly be? But that was asking too much. This was plenty. They were here. With presents! They liked him. He was one of them. At last.

Arms full of gifts, he pushed the door shut with his foot and joined them in the dining room. Beans was scooping chocolate icing from the birthday cake onto his finger. With the drama of a sword-swallower, he threw back his head and sank his finger into his mouth. When it came out, it was clean. Mutto cackled and did likewise. Henry stared at Palmer's mother, who was glaring at Beans.

Palmer's mother did not like Beans. She wasn't crazy about Mutto or Henry either, but she especially did not like Beans. “He's a sneak and a troublemaker,” she had said. “He's got a mean streak.” And she was right. But he was also leader of all the kids on the street, at least the ones under ten years old. It had always been that way. Beans was boss as surely and naturally as any king who ever sat upon a throne.

“But he's the boss,” Palmer would explain to his mother.

“Boss, my foot,” she would snort and turn away.

Some things mothers just did not understand.

“Open the presents!” Beans barked. He rapped on the table with a spoon. Mutto rapped a spoon also.

Palmer dumped the gifts onto the table and for the first time took a good look at them. They were wrapped in newspaper, sloppily fitted and closed with black tape. No ribbons, no bows, no bright paper.

He tore open the first. It was an apple core, brown and rotting. “It's from me!” piped Mutto. “You like it?” Mutto howled.

Palmer giggled. “It's great. Thanks.” What a guy, that Mutto.

The other gifts were a crusty, holey, once-white sock from Henry, and from Beans a thumb-size, brown something that Palmer finally recognized as an ancient cigar butt.

Palmer's mother, still glaring, came with more gifts. These had ribbons and bows and beautiful paper. “Gee,” she said, “after those nice presents
you just got, I feel really cheesy giving you this junk.”

Palmer opened them: a soccer ball, a book, a pair of sneakers, a Monopoly game.

“Thanks, Mom,” he said. It was pointless to say more, pointless to say, I like their presents just as much as yours, because they did it themselves. That means something. It means: We came into your house. We gave you a cigar butt. You are one of us.

Palmer's mother lit the candles, nine of them on the chocolate cake with chocolate icing. She started off the “Happy Birthday” song but soon was drowned out by the boys, who screamed it rather than sang. When they came to the line “Happy birthday, dear”âthey glanced at each other and belted outâ“
Sno-ots!
Happy birthday to you!”

So they had done it after all, given him a nickname. Snots. He moved his tongue silently over the name, feeling its shape.

For a moment he wondered if he would be getting The Treatment, but he pushed that thought aside. He was getting greedy. He had already been blessed enough for one day.

“Make a wish,” said his mother, “and blow out the candles.”

He stared into the ring of candlesânine yellow flames, plump and liquidlike, perched on their wicksâand suddenly he felt the old fear, launching itself from his shoulder and brushing a wingtip across his cheek. And just as suddenly it was gone and Beans was croaking, “Hey, we ain't got all day. I got lotsa wishes if you don't.” Beans leaned across the table, took a deep breath and blasted away. The flames vanished. Wick tips glowed orange for a second, then turned black.

Let Beans blow away, Palmer didn't care. Nothing could blow out the candleglow he felt inside. Palmer LaRueâSnotsâthe world's newest nine-year-oldâwas one of the guys.

The Captive Maiden by Melanie Dickerson
Patricia Highsmith - The Tremor of Forgery by Patricia Highsmith
Yours to Savor by Edwards, Scarlett
Rednecks 'N' Roses by Mays, Judy
Outback Hearts (Beyond Reality Book 1) by Stoker, Susan
Rebel Warrior (Medieval Warriors #3) by Regan Walker
Wave by Mara, Wil
A Randall Thanksgiving by Judy Christenberry
Amanda in the Summer by Whiteside, Brenda
The Companion by Susan Squires
Our partner