Read Written on Her Heart Online 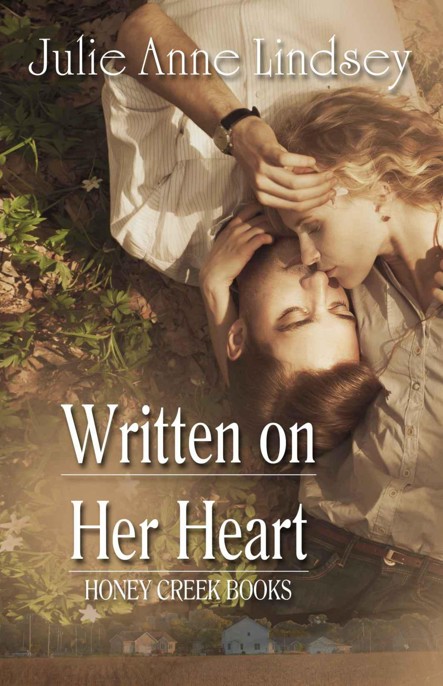 Because scars tell the story: We survived.

WRITTEN ON HER HEART

Emma has her reasons not to fall in love, but fate has other plans. When she finds a journal near
Honey
Creek
Lake
, she sneaks a peek at the words of a stranger but finds the heart of a hero instead. Soon she’s savoring every word, opening her heart to the man inside and her mind to the possibilities she gave up long ago.

Across town, Nicholas is devastated at the loss of his grandfather’s journal, one he’s written in since he left for
Iraq
a decade ago. The thought of a stranger mocking his words, or worse, someone from Honey Creek knowing his most intimate trials…. If his journal falls into the wrong hands, humiliation is sure to follow.

But what if it fell into the right ones?

Lying in the grass beneath the lake’s only weeping willow, Emma tried not to sneeze. Dandelions tickled her nose as she steadied her daddy’s old camera against one cheek. Less than two feet away, a pair of hummingbirds danced around a swath of floppy purple flowers in the sun. The shot showcased everything she loved about this place. A slip of sand and twinkling blue water filled the backdrop. The image snuggled inside her viewfinder defined
Honey
Creek
Lake
. Summer in
Ohio
. Life as she knew it.

With slow steady pressure, she anticipated the moment the shot would be hers. She’d learned long ago never to rush the moment. Then, just like that, the magical click of the shutter announced her success. She’d captured the most beautiful moment. Preserved it. Emma smiled and rolled onto her back under the shade of long, stringy branches. Sounds of children’s laughter punctuated by hoots from an impromptu volleyball game pushed her back a decade. How many days had she spent lying under that tree?

She tugged the cotton tee away from her neck. Humidity snapped it back, reapplying the fabric like a sticker. Memories of tank tops and swimsuits flashed through her mind. She shoved them into a carefully constructed mental vault before they stung her eyes like smoke from a summer bonfire. Emma lurched upward, pulling her knees to her chest, ending the slew of thoughts that never led anywhere good. The distant hoots grew louder as the number of players in the sand increased. Emma’s cue to leave.

Her muscles stretched slowly as she stood. Waiting for the perfect shot sometimes took hours. She’d waited almost two for the pair of playful hummingbirds to stop by the flowers where she lay. Only the bright purple puffballs would do. Eventually they grew brave and she caught them, mid-flight, enjoying the day. If only she could be up and on her way as easily. The hard rooted ground wasn’t as forgiving as it used to be. Then, as if to taunt her already stiff muscles, the plastic lens cap missed its thread and rolled from her camera into the grass and over a slope behind the tree.

“Figures.” Emma glanced toward the volleyball players in the distance, admiring their tanned skin and public shenanigans. She knew most of them. Some were visiting, but the majority lived in town. If she didn’t know them personally, she still knew their names and their parents and probably where they lived. Small town living.

Around the tree, she squatted to retrieve the lens cap and toppled over. Careful not to drop her camera as she fell, her backside took the brunt of the misstep. Her heel landed on something firm enough to worry her. Not a root. Not grass. With one eye closed, she peeked beside her sandal, praying it wasn’t a bird or other animal dragged there by a local cat. To her relief she found a simple brown leather book, wrapped with long skinny straps which wound around what looked like a shiny black rock with a hole drilled through it. The contraption reminded her of things her grandfather made years ago.

Curiosity seized her. Her gaze darted up, scanning the perimeter for the book’s owner. The book weighed more than she expected and filled her hands with warmth collected by the day’s steamy temperature. Running her fingertips over the soft leather binding, she traced the word
Journal
tanned into the leather-covered spine. Again she checked for someone returning to the scene of his or her loss. No one. She bit into her lip in wonder.

“Who do you belong to?” Her fingers pinched the stings, untangling them from the stone. The binding creaked softly under her touch. Inside the cover a faded stamp contained a set of numbers and a line of text.
U.S.
Army 1948
. “Hmm.”

Worn blue ink lined the opening pages. Time and possibly water warped and ruined them. She thumbed past to find much of the rest of the book written in clear black ink. The later pages wore a different handwriting than the former. The ink appeared fresher and the neatly printed words from the book’s introductory pages gave way to the lazy loops of a generation unconcerned with penmanship. A family journal, perhaps? She checked again for approaching beach goers, certain her time with the book was limited. Closing the book once more, she looked for a name tanned into the cover or written inside. Nothing. Emma let the pages fall open at their leisure, blowing slightly in the soft breeze. Short entries about sandstorms and heat filled the page where she landed. Under a heading named “Confessions” were three short sentences. “I love my country, but I don’t believe in this war. I’m afraid for my men. I’m worried about my mama.” Tally marks stood like fence posts in the corners of each page. They reminded her of a condemned man counting the days to his freedom in a movie.

Emma’s lips rolled in over her teeth. Her brows knitted together. “I could leave you here, in case your owner returns, but what if it rains? Is that what happened before?” She ran her fingers over the wavy pages near the front. No. Only some pages were dilapidated. The bulk remained smooth and untouched aside from ropes of scrolled black ink. Her gaze drifted upward to the silky blue sky and narrow strips of stark white clouds on the breeze. It could rain. Maybe not today… Still, better to be safe.

Husky voices closed the distance behind her. With no more time to consider, she stuffed the book into her satchel and secured the lens cap where it belonged. The willow’s shade dissipated behind her as she hurried away. Sun-blinded temporarily, she hoped the writer’s mama was okay now. A number of possibilities came to mind, and she glanced at her satchel. She’d check with the lodge to see if anyone lost a journal.

From her periphery she saw a pair of locals slow near the tree for a long drink of water. Both dripping in sweat and carved in muscles. Only one had bothered with a T-shirt. The cuter one if anyone asked her. No one had. She kept moving.

A blast of cold air gusted down inside the heavy lodge doors, freezing her sweat dampened hair and skin as she walked inside. A few long auburn locks flew in a cyclone around her face. Her hand ran to her throat on instinct as she bounced across the threshold. Shivers coursed down her arms and legs. The line at the front desk stopped her midstride. She should have packed a lunch. Emma examined the unfamiliar faces in the lobby. Did one of them suffer through a sandstorm, missing his mama?

“You checking in?” A leggy blond grabbed a length of renegade hair from Emma’s shoulder and tossed it into the air.

Heather smiled her easy movie star smile, and half the men in the room took notice. Her low cut red suit did look like the ones on the old television show, but her friend looked better than any of those girls: healthier, less dye and silicone, more personality.

“Hot.” Sweat on her lips and temples accentuated her words. “What’re you waiting in line for?”

“Lost and found.” Even as she spoke she wished it wasn’t true. What happened after the storm? Why was he fighting a war he didn’t believe in?

“Are we still on for dinner? I’m starving.”

“Yes.” Images of a soldier hunkered over her book ran through her mind. His book.

“Same time?” Heather tossed an enormous amount of her perfect ringlet curls over one shoulder and headed for the door. Either her break was over or she had better things to do than wait in line.

“Same sandbox.” Emma’s response gained too much attention. Her cheeks heated until her eyes blurred. Heather strode out as a man pulled the door wide, allowing her to pass. The duo from near the willow tree walked in. The cute one held Emma in his gaze. His brow creased. His lips tight. Nicholas Fenton. Her heart pumped hard against her ribcage. Before the door closed behind them, she left her place in line and darted around him. Back out into the heat.

“I’ll call later,” she said to her satchel, speed walking to her truck behind the building.

“I smell no dinner.” The screen door slapped shut.

Emma jumped in her seat, spilling the journal onto the floor. Sandals snapped over black and white checkered tile in her foyer. Confusion set in.

“No.” The room was darker than she remembered. She looked out the window behind her couch. Trees cast long shadows over her porch.

“What happened with dinner?” Heather’s beautiful face fell. “What’s that?”

All eyes locked on the journal beside Emma’s foot. “What?”

Emma moved her head side to side. “What time is it?”

“Seven.” She leaned in for the journal, and Emma kicked it under the couch. Heather snapped up, hands on hips. Eyebrows high. “Is that what you think? You’ve got a secret, and I’m going to waltz into the kitchen and forget about it?”

“I’ll make hamburgers and a salad big enough to climb inside.”

Emma sighed. A protective instinct swept over her. “It’s nothing. Just a book I found. I was reading.” She read all the time. The explanation shouldn’t cause suspicion, but Heather saw through her, always had.

Her hand opened and closed in the gimme motion she always used to get her way.

The Mothman Prophecies by John A. Keel
Avelynn by Marissa Campbell
Serena by Claudy Conn
Bucking the Tiger by Marcus Galloway
Breakable by Aimee L. Salter
Date with a Vampire by Raine English
A People's Tragedy by Orlando Figes
Exposure by Elizabeth Lister
Football Hero (2008) by Green, Tim
The Foreigners by Maxine Swann
Our partner