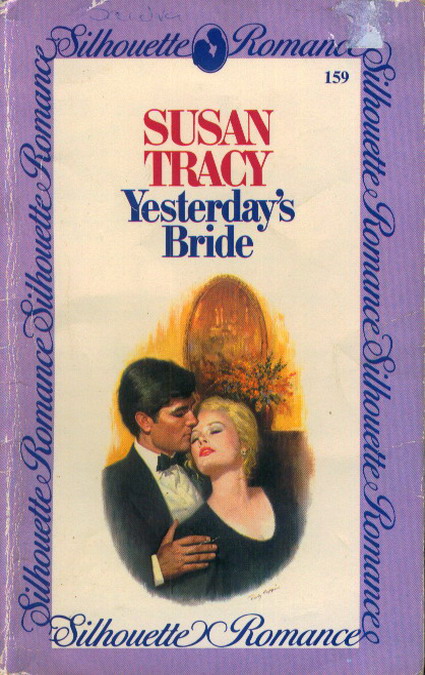 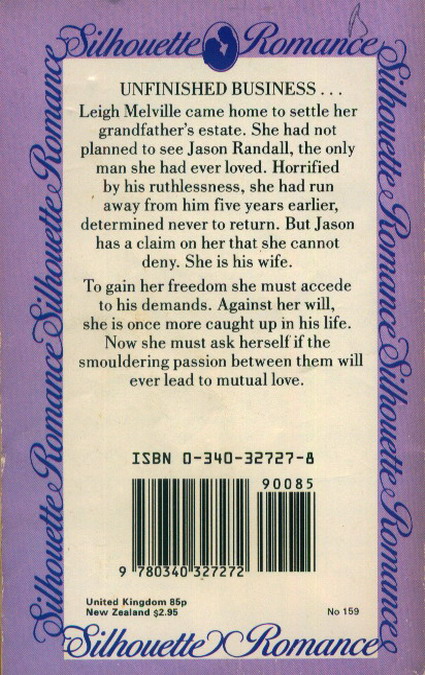 "Why Did You Run Away?" Jason Asked.

"Because I found out why you married me!"

"You needed a wife and I happened to be available."

The dark eyes narrowed. His face was a cold, hard mask.

"You should have made it clearer to me! I was young. I stupidly assumed that you loved me…"

"Love!" He spat out the word. "You can't base a marriage on illusion."

"Our marriage could have worked, Leigh," he added more softly. "You should have given it a chance."

SUSAN TRACY is another of our American authors. She has lived most of her life below the Mason-Dixon line, and likes to set her novels in the region that she knows and loves. An enthusiastic amateur photographer, her interest in capturing personality is reflected in her thoughtful treatment of her fictional characters.

Silhouette Romances is an exciting new publishing series, dedicated to bringing you the very best in contemporary romantic fiction from the very finest writers. Our stories and our heroines will give you all you want from romantic fiction.

Also,
you
play an important part in our future plans for Silhouette Romances. We welcome any suggestions or comments on our books, which should be sent to the address below.

So enjoy this book and all the wonderful romances from Silhouette. They're for
you
!

To Susan and Jill

"Amen." The minister ended the prayer and lifted his head. The service was over. As they moved away, several of the mourners stopped to speak to the girl standing beside the open grave, a forlorn figure with her bowed head and hunched shoulders.

Rain that had threatened all day began to fall in a fine mist from leaden skies. A chill wind, more characteristic of March than April, had sprung up and was moving the branches of the few trees shading the cemetery. It was a grim scene, but the girl seemed not to notice. She was staring at the ground, her face giving no clue to her thoughts.

Leigh Melville had just buried her grandfather, the Judge. She would miss him terribly. He had brought her up, and even if they hadn't seen much of one another in the last few years, they had still been close. She could always count on him to understand, whatever the circumstances. And she had certainly presented him with some difficult circumstances, thought Leigh wryly. Well, she squared her slender shoulders and took a deep breath, he was gone, and although she would never forget him or what he had done for her, she would put the past behind her.

Leigh started as someone touched her arm. A plump, middle-aged woman wearing a black coat said gently, "It's time to go, Miss Leigh. Come on, you'll get drenched." She urged the girl forward. "There's nothing more we can do here." Flora Martin, the Judge's housekeeper, propelled Leigh toward the cemetery gate.

As she walked down the graveled path between the headstones, Leigh noticed a tall man standing alone by the gate. Although his face was in shadow, he was looking directly at Leigh and she recognized him immediately.

She stopped and grabbed at Flora's hand, not taking her eyes off the figure ahead. "I should have known he'd be here," she murmured to herself. "He always admired and respected Grandfather."

Turning to Flora she asked, "Would you wait for me in the car? I'll only be a minute."

The older woman glanced apprehensively at the man standing a few feet away. "Are you sure, Miss Leigh? Why don't you just come on with me now? You've been through enough for one day," she prompted loyally.

Leigh was more shaken than she would have admitted and she wanted to get the next few moments over with as quickly as possible. She schooled her features into a cool mask, thanking her stars she had been so well trained.

Walking toward him Leigh got a clearer view of his face. He looks older, she decided. Harsh lines that hadn't been there five years ago etched his mouth and eyes and flecks of gray glinted in the thick black hair. But he was still lean, rugged, too attractive for comfort with that controlled strength of his, that air of being capable of handling anything or anyone.

Leigh had thought, if she ever saw him again, that she would find his magnetism diminished. After all, she had been so young when she knew him. But it wasn't her youthful inexperience that had imbued him with his power. Anywhere in the world, in any company, she knew this man would stand out.

His brown eyes stared without expression into her gray ones—she never had known what he was thinking—as he stood there silently, waiting for her to speak.

He inclined his head to acknowledge her greeting. "I'm sorry about your grandfather, Leigh. He was a fine man."

She tried to relax. "Yes, he was. Thank you for coming, Jason."

Again he nodded, his eyes never leaving her face.

The level black brows raised. "Of course," he assented, "go ahead."

Leigh moistened her dry lips and forced the words from a constricted throat, "Not now, Jason, and not here. Could we make an appointment, some time that would be convenient for you?"

"Such consideration," he said softly. "I take it you won't be rushing right away."

Leigh hated him so much she was shaking, and it took all her control to answer calmly, "No, there are legal matters to clear up. I'll probably be in Raleigh for a few more days."

She couldn't look at him anymore so she peered over his shoulder at the rain-washed street.

Jason paused briefly before asking, "How does tomorrow suit you—around five? Are you staying at the house?"

"Tomorrow's fine. Yes, I'm at the house." Leigh gripped her hands tightly together. "I'll see you then."

Without waiting for an answer she walked quickly past him, through the gateway, and stumbled hurriedly into the back of the waiting limousine. As she sank into the cushions, Leigh closed her eyes.
I have to pull myself together
, she thought.
He's not worth getting upset over. It's just the shock of seeing him so suddenly, without warning
.

With a worried expression on her face, Flora watched Leigh. Rarely had she seen the girl look so vulnerable. Usually she was cool and serene with a slightly detached air about her.
And so lovely
, thought the woman. Hair that looked more silver than blond, a small, straight nose, a sweet mouth. Although rather tall and quite capable, Leigh sometimes gave the impression of fragility, perhaps because she was slender or perhaps because of the fey expression that could come into her wide gray eyes.

Turning to Flora, Leigh grasped at her composure and forced herself to speak evenly. "I haven't had a chance to talk to you properly since I arrived yesterday," she said. "The house has been so full of people. The Judge was well thought of, wasn't he?"

The housekeeper wiped at her reddened eyes. "Oh, Miss Leigh, what are we going to do without him? He was such a good, kind man." She began to weep again.

After a while Leigh took the woman's work-worn hand in hers and asked about her plans.

"I thought I'd go to my sister in Wilmington. She's a widow, living alone, and would welcome some company. I hate leaving Raleigh though, it's been my home for such a long time."

"I wish you would come back to New York with me. I'd love having you to spoil me again. Remember how you used to make me those delicious ginger cookies and then scold me for eating too many?"

Flora scowled and shook an admonishing finger in Leigh's face. "You look as if you need some good nourishing food. I've never seen you so thin. You'll blow away one fine day."

Leigh smiled at her. "I'm a model. The camera adds inches, you know. If I gain too much weight, I won't photograph well and then what would I do?"

Flora sniffed and said gruffly, "You could stay here."

Sadly Leigh shook her head. "My life is in New York now, more so than ever with Grandfather gone." She looked out the window as the car slowed. "We're home."

The limousine, provided by the funeral service, pulled up in front of an imposing white Victorian house, and Leigh leaned across the front seat to thank the driver and the representative from the funeral home who had ridden with them. Then she slid out of the car, took Flora's arm and hurried into the house.

As they stood in the hall shaking the rain from their coats, Leigh swallowed a lump in her throat. This house won't be home much longer, she thought. Suddenly the events of the past two days caught up with her. The phone call from Flora that the Judge had had a fatal heart attack. Rushing to get here. Trying to stay calm to talk to the dozens of people who had called, bringing sympathy and food in the Southern tradition—neighbors, old friends of the Judge, people he had helped. Finally, the strain of the funeral. Now the house was quiet. Their friends were considerately giving Flora and Leigh solitude in which to deal with their grief.

The Year of the Sex Olympics and other TV Plays by Nigel Kneale
Sung in Blood by Glen Cook
Sorrow Without End by Priscilla Royal
Mystic Jive: Hand of Fate - Book Four by Sharon Joss
Josie and Jack by Kelly Braffet
Finding Promise by Scarlett Dunn
Back in Black by Lori Foster
El águila emprende el vuelo by Jack Higgins
Finding Dandelion (Dearest #2) by Lex Martin
Maggie MacKeever by The Misses Millikin
Our partner