Read You Belong to Me Online

You Belong to Me 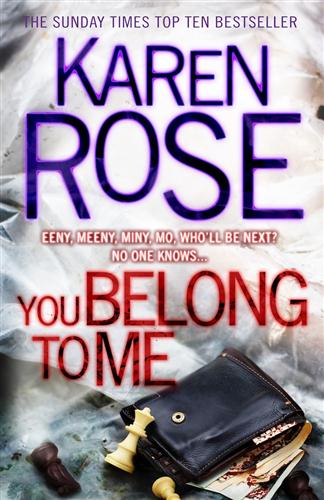 You Belong To Me

The right of Karen Rose Hafer to be identified as the Author of the Work has been asserted by her in accordance with the Copyright, Designs and Patents Act 1988.

In loving memory of A. C. Barrett, who taught me binary when I was seven, gave me my first Poe story when I was eight, and taught me to box using a Hoppity Donald Duck so that I could defend myself against schoolyard bullies when I was nine.

He employed creative means to help me master parallel parking so that I could get my driver’s license. He retyped my final university paper from my handwritten draft when my computer crashed the night before it was due, so that I could get a much-needed night’s sleep
and
my degree, and only scolded me a little for not having my files backed up.

He made sure nobody ever told me that I couldn’t do anything I set my mind to.

Most of all, he always loved me, every day, every year. I miss you, Dad.

And to Martin, my rock.

Marc Conterato, for all things medical. And for everything else.

Danny Agan, for answering all my law enforcement questions.

Frank Ahearn, for the wealth of information on skip tracers and the art of making someone disappear.

As always, all mistakes are my own.

Malcolm Edwards ignored the marina manager’s deep voice, his eyes fixed on his destination, his weakened body already aching. The
Carrie On
beckoned, rocking as the Chesapeake Bay churned. A storm was coming. It was a perfect day to die.

Just a few more steps, then I can rest
. Then the dock began to rumble beneath his feet as Daryl charged up from behind.

‘Hey! Stop right there. This is private property. Hey, buddy! I said—’

Malcolm winced as a beefy hand grabbed his upper arm and spun him around. For a moment he looked into Daryl’s face, waiting silently as recognition flickered and the man’s mouth dropped open in shock.

‘It’s all right,’ Malcolm said gently. ‘I know I don’t look like myself.’

He knew what he looked like. He was surprised Daryl had recognized him at all, despite the years they’d known each other. Malcolm doubted many of his so-called friends would recognize him, not that they’d given themselves the opportunity. Only Carrie had stood by him, and there were times Malcolm wished she had not. In sickness and in health. This was definitely the former.

She thought he couldn’t hear her sobs in the shower, but he did. He’d give all he owned not to put her through such hell. But man didn’t get to make those calls. That was God’s territory. Carrie had cursed God as she’d watched Malcolm waste away, but Malcolm didn’t have that luxury. He already had enough black marks on his soul.

Daryl swallowed hard. ‘Can I get you anything? Help you in any way?’

‘No. I’ll be fine. I’m going fishing.’ He held up a bucket of bait he’d bought for appearances. ‘I just want to feel the wind in my face.’
One last time
, he added to himself. He turned toward his boat, determinedly putting one foot in front of the other. The dock rumbled again as Daryl walked beside him, clearly hesitant to speak his mind.

‘Sir, there’s a squall comin’ in. Maybe you should wait.’

‘I don’t have time to wait.’ Truer words were never spoken.

Daryl winced. ‘I can get a crew to take you out. My grandson is a fine sailor.’

‘I appreciate it, I truly do, but sometimes a man just wants to be alone. You take care, and thank you.’ He made it on board, his body sagging as his hands closed over the wheel. It had been far too long since he’d spent a day on the Bay. But he’d been busy. There’d been doctors and treatments and . . . He looked up at the forbidding sky.

And making things right. He’d had too many things to make right, especially the one thing that had burdened his mind for twenty-one years.

He thought about the letter he’d sent and hoped it wasn’t too late. He hoped he could handle the wheel long enough to get far enough out to do what needed to be done. He hoped drowning really was just like going to sleep.

The water grew choppier, the wind more brutal the farther out he got. Finally he killed the throttle and listened to the waves, his eyes closed. He drew the salty air deep into his lungs, savoring this, his final day. Carrie would be sad, but part of her would be relieved. She’d put on a brave face that morning when he kissed her goodbye. He’d told her he was going fishing after his doctor’s appointment. When the authorities knocked on her door to give her the bad news, she’d swear that her husband could never have taken his own life, but deep down she’d know the truth.

He stepped onto the deck, setting up his fishing poles. There were appearances to be kept up in case someone found his boat intact after he was ‘swept overboard’ by a rogue wave. He was baiting a hook when a harsh voice broke into his thoughts.

‘Who are the others?’

Malcolm spun around, the bait sliding through his fingers. A man stood a yard behind him, feet planted firmly, arms crossed over his chest. There was hate in his narrowed eyes and Malcolm felt fear shiver down his spine. ‘Who are you?’

The man took a steady step forward despite the rocking. ‘Who are the others?’

The others
. ‘I don’t know what you’re talking about,’ he lied.

The man pulled a letter from his pocket and Malcolm’s stomach roiled, recognizing both the letter and the handwriting as his own. Malcolm thought back twenty-one years and thought he knew who the man was. He definitely knew what the man wanted.

‘Who are the others?’ the man asked once again, carefully spacing each word.

Malcolm shook his head. ‘No. I’m not going to tell you.’

The man reached into his other pocket and pulled out a long filleting knife. He held it up, examining the sharp edge. ‘I’ll kill you,’ he said, with little emotion.

‘I don’t care. I’m going to die anyway. Or had you not noticed?’

The boat pitched and Malcolm stumbled, but the man stood firm.
He’s got sea legs
. If he was who Malcolm thought he was, that made sense. The man’s father had been a fisherman back then.

In the years since, businesses had been lost, lives splintered. Ruined.
Because of what we did. What
I
did. He’ll kill me. And I’d deserve it
. But he had no intention of divulging the others’ identities, nor a wish to die horribly. He lunged toward the side.

But the man was fast, grabbing Malcolm’s arm and shoving him into a deckchair, binding his hands and feet with a length of twine he pulled from his back pocket. He’d come prepared.

The man rose, threateningly. ‘Who are the others?’

His heart pounding, Malcolm stared up at the man he’d wronged. And said nothing.

The man shrugged. ‘You’ll tell. If I had more time, I’d do everything to you that you did to her.’ He met Malcolm’s eyes. ‘Everything.’

Malcolm swallowed as he remembered everything that had been done that night, so long ago. ‘I’m sorry. I said I was sorry. But
I
didn’t do anything to her. I swear it.’

‘Yeah,’ the man said bitterly. ‘I got that from your letter. And when you finally confessed, you were too much of a coward to sign your name.’

‘I figured it was one of you. You all ran together then. You all signed that team picture.’

Malcolm closed his eyes, seeing it. They’d been young and so damn arrogant. They thought they had the world by the tail. ‘The one in the trophy case at the high school.’

He sneered. ‘The very one. Your handwriting hasn’t changed much in twenty-one years. You still make your M’s the same way. It didn’t take a genius to track that letter to you. Which brings me back to the reason for my dropping by. You will tell me what I want to know.’

The man’s sneer became a sinister smile. ‘We’ll see about that.’

He disappeared below deck, and Malcolm pulled at his bonds, knowing it was futile. His mind was flashing pictures, all the sick, disgusting things that had been done to the girl that night so long ago, as he’d stood and watched. And done nothing.

I should have done something. I should have made it stop
. But he had not, and neither had the others. Now he’d pay the price.
Finally
.

He heard the thumping of something being dragged up from the hold. It was a woman. Malcolm’s gut turned to water. She was wearing a sweater exactly like the one he’d committed to memory just hours ago. When he’d kissed his wife goodbye.

‘
Carrie
.’ Malcolm tried to stand, but could not. She’d been bound, blindfolded and gagged, and the man was dragging her by her arm. ‘Let her go. She did nothing.’

‘Neither did you,’ he said mockingly. ‘You said so yourself.’ He shoved Carrie into a chair and held the knife to her throat. ‘Now tell me, Malcolm. Who. Are. The. Others?’

Desperately Malcolm glanced at the man’s narrowed eyes before returning his own to the knife at his wife’s neck. He couldn’t breathe. Couldn’t think. ‘I don’t remember.’