Read You Could Look It Up Online

You Could Look It Up

BOOK: You Could Look It Up
>>DOWNLOAD HERE >>READ ONLINE NOW
ads 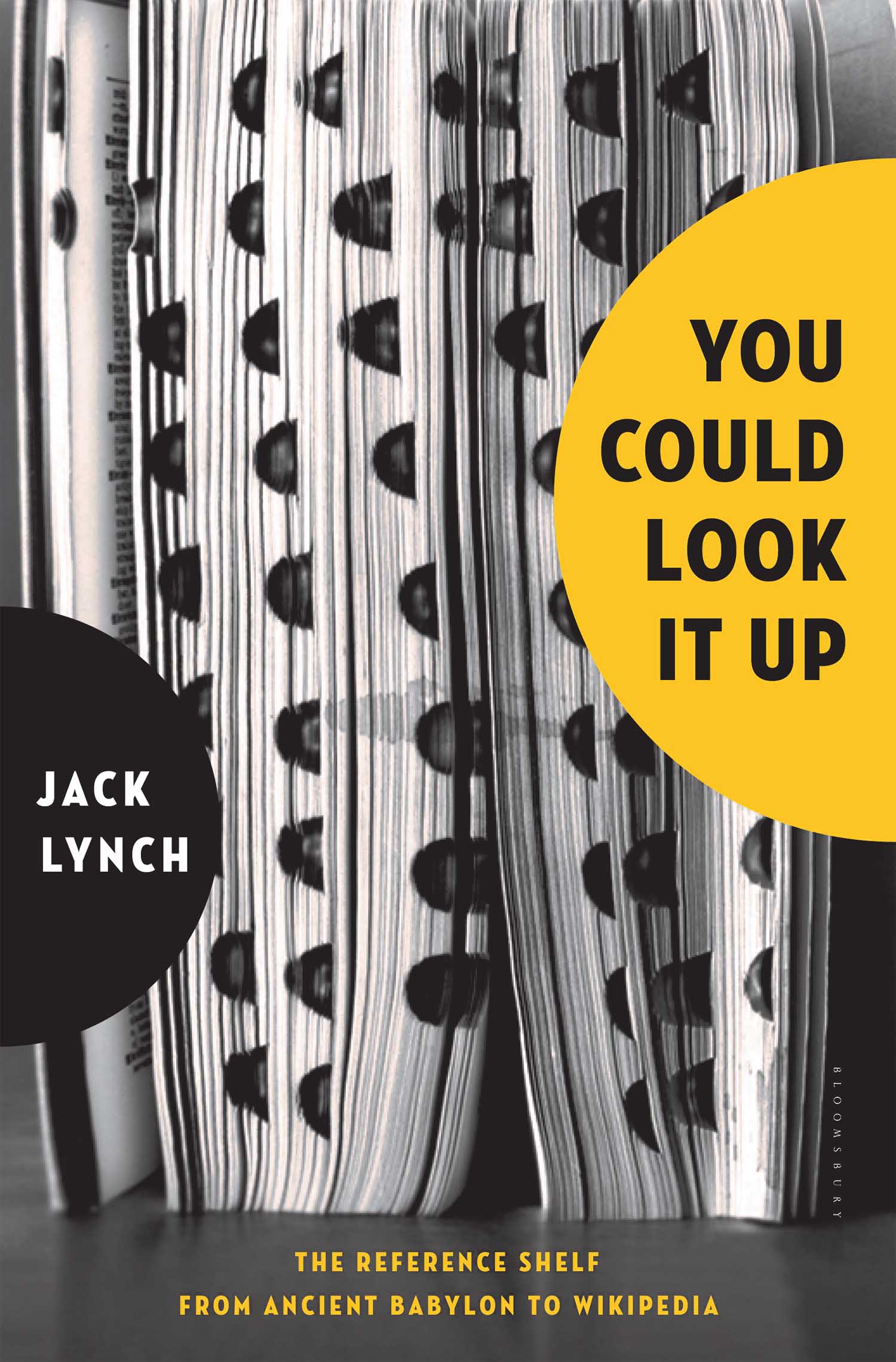 For Dan Traister
Prince of Librarians 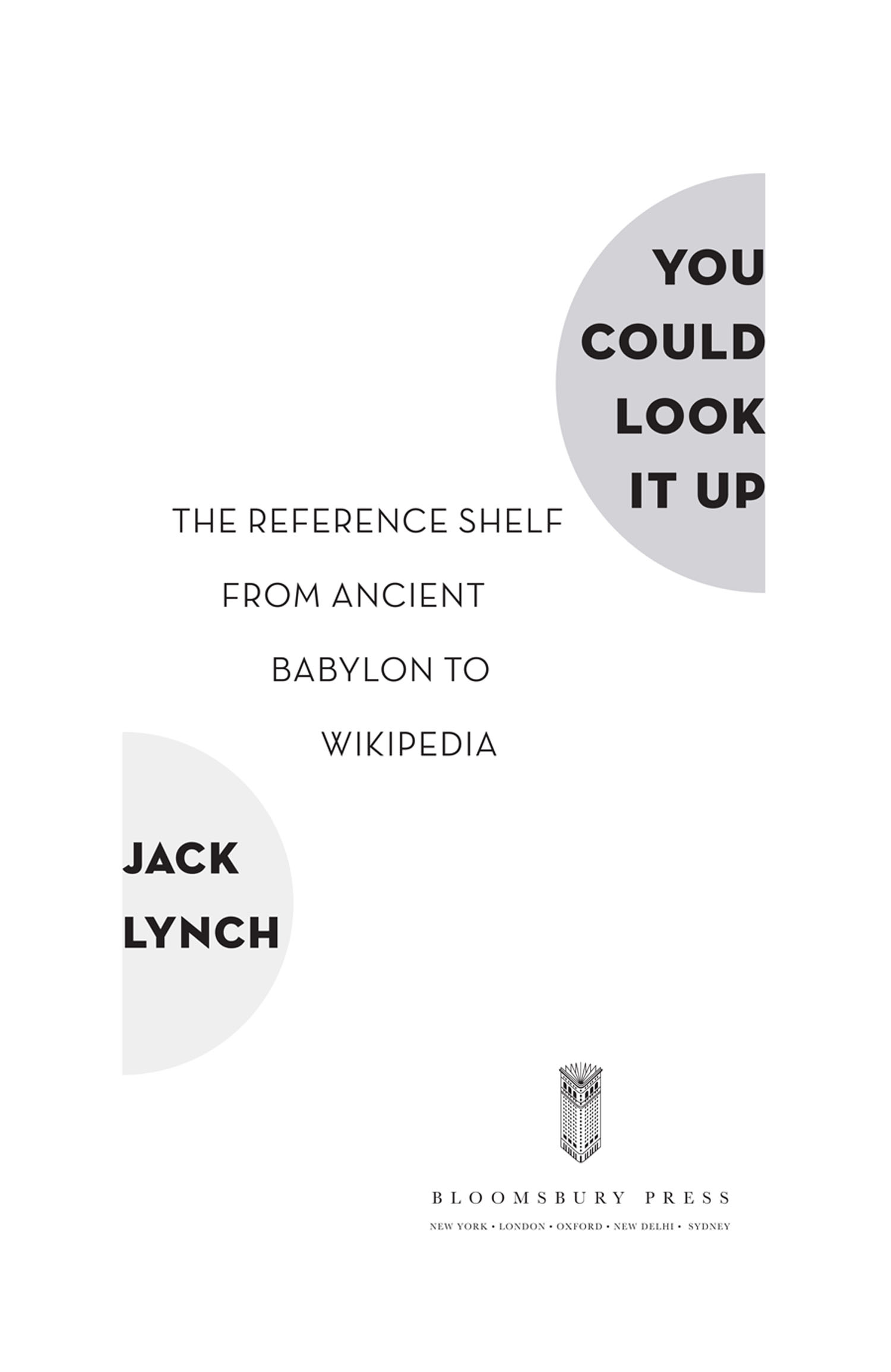 Prologue: Looking It Up

Justice in the Earth: Laws of the Ancient World

In the Beginning Was the Word: The First Dictionaries

CHAPTER 2½:
A Fraction of the Total: Counting Reference Books

The History of Nature: Science in Antiquity

CHAPTER 3½:
Easy as ABC: The Rise (and Fall?) of Alphabetical Order

CHAPTER 4½:
The Invention of the Codex

The Circle of the Sciences: Ancient Encyclopedias

CHAPTER 5½:
The Dictionary Gets Its Day in Court

New Worlds: Cartography in an Age of Discovery

CHAPTER 7½:
Tell Me How You Organize Your Books

CHAPTER 8½:
To Bring People Together: Societies

The Infirmity of Human Nature: Guides to Error

CHAPTER 10:
Guarding the Avenues of Language: Dictionaries in the Eighteenth Century

CHAPTER 10½:
Of Ghosts and Mountweazels

CHAPTER 11:
The Way of Faith: Guidelines for Believers

CHAPTER 11½:
Who’s Who and What’s What: Making the Cut

CHAPTER 13:
Collecting Knowledge into the Smallest Areas: The Great Encyclopedias

CHAPTER 14:
Of Redheads and Babus: Dictionaries and Empire

CHAPTER 18:
Words Telling Their Own Stories: The Historical Dictionaries

CHAPTER 19:
An Alms-Basket of Words: The Reference Book as Salvation

CHAPTER 22:
The Good Life: The Arts and High Society

CHAPTER 23½:
At No Extra Cost! The Business of Reference Books

CHAPTER 24:
Full and Authoritative Information: Doctrine for the Modern World

CHAPTER 25:
Nothing Special: Books for Browsers

The World’s Information: The Encyclopedic Dream

PROLOGUE: LOOKING IT UP

It all begins with the
written
word.

“Reference” means nothing without writing. “In a primary oral culture,” wrote Walter J. Ong, the twentieth century’s greatest theorist of orality, “the expression ‘to look up something’ is an empty phrase: it would have no conceivable meaning. Without writing, words as such have no visual presence.... You might ‘call’ them back—‘recall’ them. But there is nowhere to ‘look’ for them.”
1
But because we live in a bookish and data-rich culture, we all know what it means to “look” for information.
You Could Look It Up
is an account of fifty great reference books, from the third millennium
B.C.E.
to the present, all of them ambitious attempts to collect a vast amount of knowledge and to present it to the world in a usable form.

For some, the reference book is the emblem of pedantry, sterility, dead facts rather than living wisdom. Charles Dickens gave us Thomas Gradgrind, the dry-as-dust pedant whose mantra is
“Fact, fact, fact!”
Sadly, the word
knowledge
is often paired with
rote
, as if a knowledge of facts necessarily precludes a deeper understanding or an imaginative engagement.

“Dictionaries do not spring into being,” Sidney Landau wrote. “People must plan them, collect information, and write them… . No other form of writing is at once so quixotic and so intensely practical.”
2
But when the public thinks about the people who write reference books—if the public ever thinks about them—they probably call to mind what Samuel Johnson called “harmless drudges.” Howard Hawks’s 1941 screwball comedy
Ball of Fire
sparkles with a script co-written by Billy Wilder. It features a team of socially inept professors, modeled on Snow White’s seven dwarfs, who live together in a big house and work on an encyclopedia containing all the world’s knowledge. Gary
Cooper, brilliantly cast against type as Professor Bertram Potts, stands at the head of this sorry crew of encyclopedists, lexicographers, and grammarians including Professors Gurkakoff, Magenbruch, Oddley, and Peagram. They are all utterly stymied when confronted with the va-va-voom burlesque-queen heroine, Katherine “Sugarpuss” O’Shea, played by Barbara Stanwyck.

But the actual world of reference books, overflowing with
fact, fact, fact
, is positively exuberant, passionate, bursting with knowledge, and their authors are not always sexless cartoon characters but include quirky geniuses, revolutionary firebrands, and impassioned culture warriors, many of them with the unflagging intellectual energy of a whirling dervish.
You Could Look It Up
tells the story of two emperors, a Roman naturalist who sailed his ship toward an erupting volcano and died in the falling ash, the inventor of the decimal point, the philosophers who were blamed for starting the French Revolution, the German folklorists whose gory tales still frighten children, and an Oxford classicist whose daughter Alice went down the rabbit hole to Wonderland.

You Could Look It Up
is partly a call to read, or at least read
in
, these books, and to get to know the people who wrote them. A reference book collects a civilization’s memoranda to itself. When we turn an ancient dictionary’s pages, we read something never meant for our eyes, and we get to overhear the dead talking among themselves. That is why reference books have much to teach us, even when they are obsolete—especially when they are obsolete. Of course we can learn all sorts of trivia from old dictionaries and encyclopedias, but also much more than trivia. In looking at these old books we get the chance to look
through
them, at the people who created them and at the worlds they inhabited. When we discover that human beings were divided into five groups in the first
Encyclopædia Britannica
—American, European, Asiatic, African, and “monstrous”—we get a glimpse of early “scientific” race theory coming into being. An old atlas is worthless if we want to locate events in today’s news, but it tells us plenty about how the world looked to another culture. An encyclopedia written before Columbus crossed the Atlantic says nothing useful about the smartphone, but it is one culture’s way of describing the entirety of their physical, intellectual,
and spiritual worlds. Even a book filled with numerical tables can end up telling a story about the incipient Industrial Revolution.

The dictionary, the encyclopedia, the atlas, the legal code—all act to distill knowledge. Distillation is the right metaphor. As any decent encyclopedia will explain, distillation removes impurities and gives us a concentrated essence. A solution goes into the alembic, where it is heated to boiling; the volatile spirits separate from the water and are captured, then allowed to condense on the other side. Out comes a purer form of the spirit—in our case, knowledge. The reference book is concentrated wisdom.

Even when concentrated, the information can still be overwhelming. A reference book is the product of a society trying to deal with more knowledge than even the most committed sage can hope to hold in memory. Reference books are big, because no one needs an encyclopedia with ten entries. Only when the body of information becomes too large to keep in our heads do we decide to offload it to paper and expand our memories into offsite storage.

And the more virtual memory a reference promises us, the more enthusiastic we are about its contents. At the heart of the reference genre is the Renaissance ideal of
copia
, Latin for “copiousness” or “fullness.” Desiderius Erasmus, the very model of the Renaissance man and one of the most expansive minds the world has ever known, devoted a whole book to
copia
, the ebullient overflowing of words and ideas. He loved books that were crammed with knowledge, so much so that they were almost bursting at the seams, and everyone who has ever fallen in love with a dictionary or an encyclopedia has the same passion. This book tries to capture some of the copiousness that marks the great reference books.

Reference books shape the world. Encyclopedists and lexicographers rarely discover new facts, but by organizing and categorizing the old ones they can influence whole fields of knowledge. They determine what kinds of questions a civilization can ask about itself. Those who work under the imprimatur of some prestigious organization—
The Catholic Encyclopedia
,
The Great Soviet Encyclopedia
—proclaim unquestionable doctrine to the masses. Lexicographers may have no ambitions beyond telling an accurate story about a word, but they have determined
the outcome in decisions of the Supreme Court. The compilers of the
Diagnostic and Statistical Manual of Mental Disorders
can, by declaring a given condition to be a psychiatric illness, save a criminal from the gallows or exclude a qualified person from government service. And yet, even though these books have all been compiled by fallible human beings, much of the world looks on them as unimpeachable. I’ll argue—with only a small bit of exaggeration—that the reference book is responsible for the spread of empires, the scientific revolution, the French Revolution, and the invention of the computer.