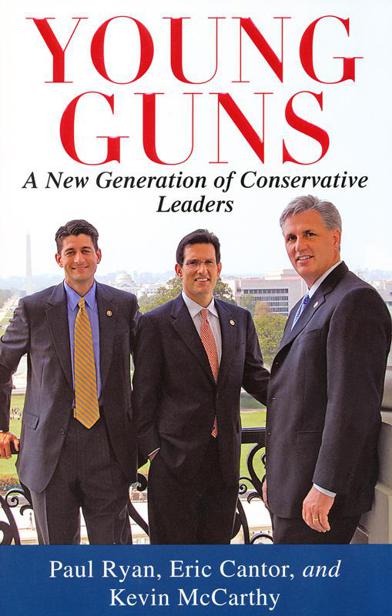 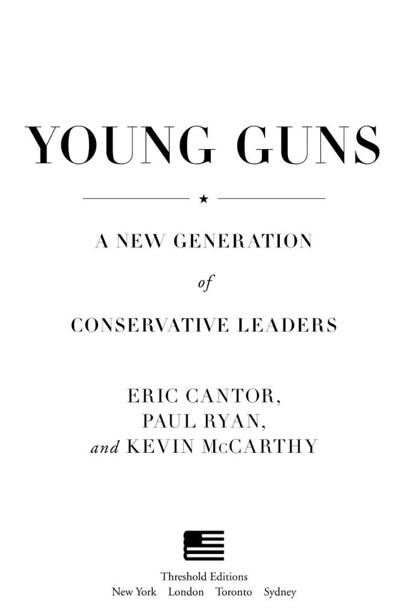 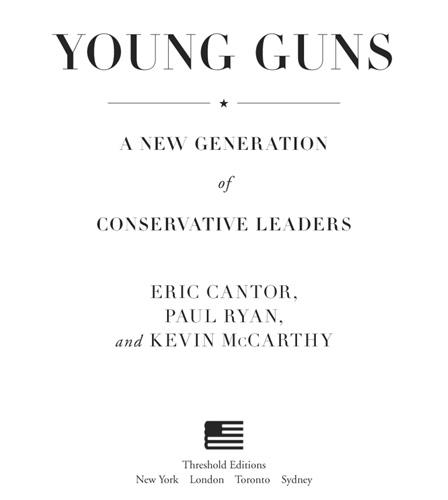 All rights reserved, including the right to reproduce this book or portions thereof in any form whatsoever. For information address Threshold Editions Subsidiary Rights Department, 1230 Avenue of the Americas, New York, NY 10020.

THRESHOLD EDITIONS and colophon are trademarks of Simon © Schuster, Inc.

1
A Party on the Bridge to Nowhere

2
A Year of Living Dangerously

4
Health-Care Reform and the New Way in Washington

6
A Roadmap for America’s Future

7
The Politics of Re-Earning Trust

9
A Commitment to America

When they came together in 2007, Eric Cantor, Paul Ryan, and Kevin McCarthy didn’t seem to be a natural fit. They were young, conservative Republican members of the House of Representatives, but elected at different times, from distant regions of the country, and their political skills were anything but similar. Yet having joined forces as leaders of Young Guns, they now represent the Republican future in Congress.

Cantor was elected from Richmond and its suburbs in Virginia in 2000 and two years later was already on the leadership track. He’d been spotted by then House Republican whip Roy Blunt and chosen as chief deputy whip. In 1998 at age twenty-eight, Ryan won a House seat from the southern tier of Wisconsin. By 2004, he’d emerged as the congressman who knew more about the federal budget,
taxes, entitlements, and health care than anyone else in Washington and understood the need for radical measures to reform them. McCarthy was elected in 2006 from an agricultural and oil-producing district in the San Joaquin Valley in California. Even before he arrived on Capitol Hill, he had campaigned for many of his Republican colleagues and was familiar with most of the others. In 2008, Cantor tapped McCarthy as his chief deputy whip.

What prompted Cantor, Ryan, and McCarthy to come together was a story in
The Weekly Standard
(with separate profiles on each of them). They appeared on the cover in a photo taken on a Capitol balcony overlooking the Mall. They were all smiles. They knew each other as members of the embattled Republican caucus that had lost control of the House in the disastrous 2006 mid-term election. But they hadn’t realized their individual skills were remarkably complementary: Cantor the leader, Ryan the thinker, McCarthy the strategist. Some of us at
The
Weekly Standard
had noticed this. Thus the cover story.

In a sense, their alliance and the creation of Young Guns was a revolt against the older, established Republican leaders in the House. The party establishment was dedicated to protecting incumbents at all cost. With money, manpower, and advice, Young Guns supports challengers, many in races that otherwise might be ignored by the national party. Young Guns is partial to young, reform-minded Republicans. It is eager to erase the image of congressional Republicans as big spenders preoccupied with assuring
their own reelection. In short, Cantor, Ryan, and McCarthy would like to fill the ranks of House Republicans with members, like themselves, committed to policies and legislation infused with the principles of limited government, free markets, and individual freedom. Young Guns is not for “me-too” Republicans, those comfortable with a scaled-back version of the Democratic agenda.

Cantor had followed the advice of his predecessor from the Richmond district and political mentor, Tom Bliley. Stay off the Commerce Committee or you’ll be written off as tobacco’s man in Washington, Bliley told him. It would be a liability if he sought a spot in the House leadership. Instead, with a law degree and a background in his family’s real estate management firm, Cantor angled to be on the tax-writing (or tax cutting) Ways and Means Committee. So when Blunt called him in 2002, he expected to be offered a seat on Ways and Means. But Blunt had noticed his leadership attributes: energetic, respected by colleagues, his conservatism tempered by a streak of caution. And Blunt and his aides weren’t shy about touting Cantor’s performance as deputy whip.