Read Your Dreams Are Mine Now Online

Your Dreams Are Mine Now 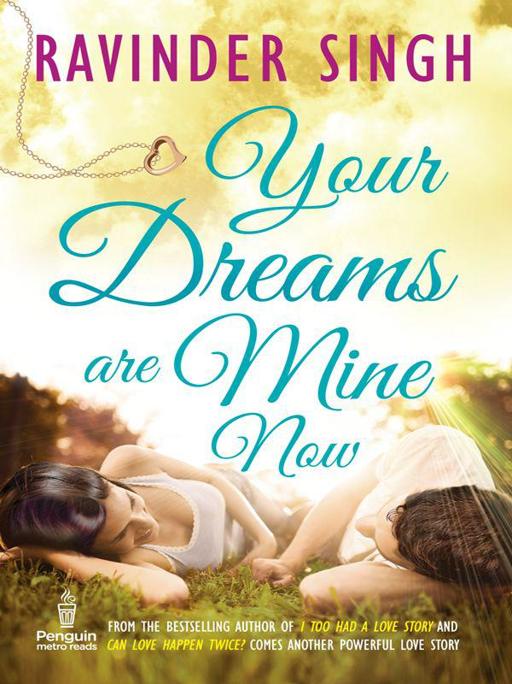 YOUR DREAMS ARE MINE NOW

YOUR DREAMS ARE MINE NOW

Ravinder Singh is the bestselling author of
I Too Had a Love Story
,
Can Love Happen Twice?
and
Like It Happened Yesterday
. After having spent most of his life in Burla, a very small town in western Odisha, Ravinder is currently based in New Delhi. He has an MBA from the renowned Indian School of Business. His eight-year-long IT career started with Infosys and came to a happy ending at Microsoft where he worked as a senior programme manager. One fine day he had an epiphany that writing books is more interesting than writing project plans. He called it a day at work and took to full-time writing. He has also started a publishing venture called Black Ink (
www.BlackInkBooks.in
), to publish debut authors. Ravinder loves playing snooker in his free time. He is also crazy about Punjabi music and loves dancing to its beats.

He is more frequent in his response to readers on his Twitter
[email protected]_RavinderSingh_.

Download provided by [email protected], join us to get more books without a watermark like this.
IBD stands for Indian Books Database, a private group of people who love to read books and equally love to share it with people. We are having 27 members so far, that is because we are not seeking too much to expand, but expanding our wings time-to-time only that much that is needed for a smooth fly. Mail us at
[email protected]
if you want to join us, or skype chat with
willcontainer
for a demo visit to our dedicated book sharing community. Joining our elite group is not free but it's worth every paisa you pay, and even more. You can ask existing members of our group how they feel about us from XOSSIP.COM, good luck finding them.
Price is $20 for a year. You can requests for missing titles also. Mail us when you are ready. We take Paypal, Flipkart E-Gift Voucher and Bank Deposits in some conditions. All your money is spent on buying books, not a single paisa is spent on our personal needs. Join us today!

There was still enough time left for dusk. But the sky over the city of Delhi was getting darker with every passing minute. It was the end of May. Summer was at its peak. After breaking the previous year’s record, yet again, the maximum temperature in the city was at an all-time high. To escape the hottest part of the day, in the afternoons, people preferred to stay confined to the shelter of their offices and homes. The air was dry.

But that day was very different.

That day, late in the afternoon, the sun that was usually blazing in the western sky, was untraceable. Dense dark clouds that had flown in from the east had blocked the sunlight. It never got this dark so early in the day in the capital. But that day, Mother Nature too had chosen to wear black before time—perhaps as an act of solidarity; perhaps as a mark of protest.

In no time, the sky appeared visibly angry. Sudden intermittent bright flashes of lightning tore out from behind the dark clouds. A wild sky roared in anger—loud and clear. It threatened to rain.

It certainly wasn’t the arrival of monsoon. That was at least a month away. A spell of rain in the hot summer isn’t uncommon in Delhi. Intense heat for a prolonged period usually led to a shower. But the manner in which the rain was preparing itself to fall over the city of Delhi that day, was not a common occurrence. It was rather scary.

A few thousand feet below the angry black clouds were many thousand angry souls who had come out on the streets of Delhi. Agitated young men and women—college students and office goers. There was rage in their eyes, their young faces, their body language. They were a mass of anger and protest. And they were loud—louder than the loudest thunderclaps. It didn’t matter if they knew the person standing next to them or walking with them. They had all gathered for a cause that was common to each one of them—justice!

That was one word anyone could read on those several hundred banners and posters that the crowd unanimously brandished.

It had all become a phenomenon, which was unseen in Delhi till that evening. Every road that led to India Gate and Jantar Mantar, every train that arrived at Rajiv Chowk metro station, every bus that drove into central Delhi, was packed with youngsters. Delhi was witnessing a first of its kind mass protest. The young India that on weekends would have chosen to chill out in glamorous multiplexes to watch a movie or would have opted to sweat it out on the cricket grounds, had chosen to spend the weekend on the baked roads of Delhi.

On the other side of this young India was an old system that wasn’t yet ready to change itself. It was a system that on one hand had severely failed to maintain law and order in the state, but on the other hand was trying to control the chaotic situation it was faced with. Every single policeman in the city was on alert. Clad in their khaki uniforms and protected by their helmets, the troop brandished their canes from behind the barricades.

The scene was similar at each and every epicentre of protest. The gathering at the vast space in front of Rashtrapati Bhavan was the biggest of all, seeing which the Rapid Action Force (RAF) had been installed next to the state police. From tear gas pistols to water cannons, the law and order machinery had prepared itself to deal with the situation at hand.

A gathering of thousands at this one place was a sight to behold. Every single sound, be it the frequent voices over the hundreds of walkie-talkies in the hands of cops, the centralized loudspeaker installed over the RAF’s
Vajr
van, or the news journalists reporting live, all of it added to the noisy chaos. But the one sound that dominated and suppressed every other was the thumping hum of the crowd.

Traffic that evening had come to a complete standstill. On a few key roads that led to the epicentres of the protest, the only vehicles allowed to enter were either the media vans or the police patrols. Everything else was in a deadlock.

Then came the moment when the much-anticipated occurrence happened.

Large drops that were powerful enough to disperse the crowd, to make people run away from the open streets and seek the nearest shelter, fell in sheets. The scene became even bleaker. Yet it wasn’t able to break the newfound will of this nation’s youth standing united for a cause.
How could a spell of rain break those who’d already prepared themselves to face the monstrous water cannons?

Besides, they were waiting for the rain anyway.

So quite miraculously, the rain only ended up uniting them. Every boy and girl, every man and woman, held each other’s hands.

They made a human chain.

Indeed it was an unbelievable spectacle, which looked more like a film shoot. But then our films and our society reflect each other. What often happens in society goes onto the celluloid and vice versa.

Like needles, the raindrops pierced the skin of all those present. The rain drummed over their heads. Gallons of water streamed down their faces. Eyes shrank and nostrils widened to engulf as much air as possible. Some breathed through their mouth. In no time their wet clothes clung to their wet bodies. Every gust of wind now began to appear cold.

By then, every other sound had died down. The only sound that prevailed was that of the rain. All this while the youth of Delhi stood still holding each other’s hands. Many of them had been shivering. So they tightened their grip. It felt as if they were passing strength and energy to each other through their hands. It was a different Delhi that day—never heard of and certainly never seen earlier.

In that much-awaited rain of May that brought the temperature down, young India was boiling.

It was waking up from its long uninterrupted sleep. Scores of media people and camerapersons captured it all and broadcast it live to the rest of the nation, which participated in the same emotion and aggression through this coverage.

But far away from this, where the battle between the citizens and the system was going on, there was another place—a place where a battle between life and death was in progress.

It had all begun from here—the All India Institute of Medical Sciences, well known as AIIMS.

The deathly silence in the ICU of this government hospital that evening was loud enough to wake up the entire nation. It was on every news channel. The camerapersons covered every movement of the bureaucratic and political cavalcades that arrived at the gate. The reporters captured every minute detail that the team of doctors had shared with them.

This state of affairs persisted for a long while. The world outside AIIMS continued to wait in anticipation. The sky above Delhi continued to cry.