Read You're the One: a Contemporary Romance Novella Set in Paris (Bistro La Bohème) Online

You're the One: a Contemporary Romance Novella Set in Paris (Bistro La Bohème) 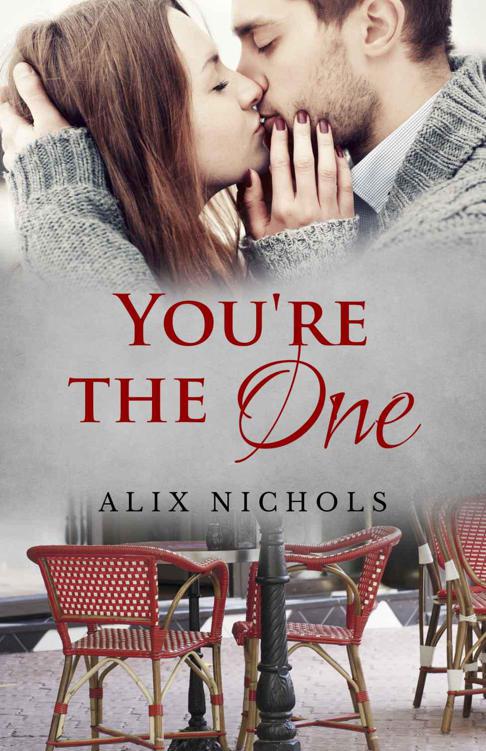 Other books by Alix Nichols:

What If It’s Love? (a Bistro
La Bohème
novel)

This is a work of fiction. Names,
characters, places and incidents are the product of the author’s imagination or
are used fictitiously. Any resemblance to actual events, locales, or persons,
living or dead, is purely coincidental.

Natalie
sat on the couch next to Fred. She had five minutes. After that, his favorite
show would start, and then he’d go straight to bed and drop off.

“
Chéri,
how do you feel about starting a
family?” she asked.

He blinked a
few times. “I haven’t really thought about it.”

“This is a
good time. We’re both professionally stable—”

“Twenty-seven
and twenty-nine is a perfect age to have a first baby.” She took his hand.
“We’ve been together for three years now . . .It’s a natural next step.”

“I’m working
like crazy. Remember the project I told you about? It could be my
breakthrough.” His gaze darted to the TV. “I’m not
very . . .available for a baby right now.”

She didn’t
reply as she searched for the right words.

He gave her
palm a little squeeze and then pulled his hand free. “My career is my top
priority right now.”

He kept
silent, and Natalie wondered if he was reconsidering.

Perking up,
she added, “And my parents would be happy to give us a hand.”

“We can rent a
bigger one, maybe less centrally located—”

“Out of the
question. I love this neighborhood. I’m not ready for suburbia yet.” He turned
back to the television and increased the volume.

The beginning
credits of his show were rolling on the screen. Her audience was over. Even
though Fred hadn’t actually said no, his message was loud and clear:
I don’t want a baby, now please drop the
subject.

And so she
did.

For the next
hour, she sat quietly, biting her nails and blaming herself for having handled
the matter so poorly. Fred was the man of her life. She was lucky this
well-liked, smart, and handsome guy wanted to be with her. But he was also
complicated. He often said one thing and meant another, expecting her to read
between the lines. He expected her to respect his boundaries, not put pressure
on him. He also expected her to steer clear of certain topics—those being
his parents, his siblings, marriage, real estate, and children.

Natalie
clenched her fists. She should have known better than to bring up one of the
taboos without careful preparation or a test run. What had come over her? If
only she’d stopped for a moment this afternoon, when she fussed to make sure
Fred was in a good mood tonight, and remembered she was fighting a lost cause?

But
she’d lost the big picture behind details. When she finished work earlier
today, she rushed to the Metro at four o’clock to beat the crowds, then to the
bakery to get a fresh baguette. After that, she ran to the dry cleaner’s to
pick up Fred’s suits, and then to the cheese shop and the butcher’. Once at
home, she cooked, cleaned the apartment, and ironed Fred’s shirts. She went
over her mental checklist, afraid she’d forgotten something. Something
important . . .

And
then it came to her.
The button!
Fred
had asked her last night to fix a loose button on his gray suit jacket. It had
slipped her mind, and now it could ruin everything. A tiny spot of ink on a
white sheet of paper that would spread inexorably until the whole sheet turned
black. That was how it was with Fred. He would get all worked up over the most
stupid, insignificant thing. And there would be no talking to him.

Natalie
scooted to the bedroom and opened the wardrobe.
Right.
Half of his expensive Italian suits were gray. She checked
all the buttons one by one until
bingo!
She found it.
Now, everything would be
perfect.
All the boxes were ticked, no ink stains. Fred would be in a good
mood and they’d talk.

He
came home at nine, earlier than the previous few days. He collapsed on the bed
and kicked off his shoes.

“The
dinner’s still warm,” she said.

“I’ll
take a rain check. We stuffed ourselves with junk food at the office, so
. . .”

She
shoved the food in the fridge and waited
in the living room until he changed and slumped down on the couch in front of
the TV.

And that was
when she sat next to him and screwed up the most important conversation in her
life.

Adrien had
expected October to be a lot milder here in Okinawa than in Paris, but this
wasn’t just mild—this was need-a-dip-in-the-ocean hot. As he walked from
his hotel to the Okinawa Convention Center, he took in the sights, smells, and
the general feel of Ginowan. It was different from Tokyo and Kyoto in so many
ways, and he liked it better.

Not that he
didn’t appreciate the rest of Japan. He had a lot of admiration, even awe, for
its refined beauty and achievements. But he found it too stiff and rushed. The
island of Okinawa was relaxed. People in the street wore flip-flops. They
smiled. They ate pork soup for breakfast and lived to be a hundred.

As he stepped
into the convention center, the air conditioning hit him with an icy gust. Like
most buildings in Asia, the air conditioning ran at maximum capacity, cooling
the air a little too much for his liking. He should have packed one of his
sweaters. His wool sweaters were bulky, but they were comfy and warm.

He had an
appointment with Gustavo del Rio, the world chess champion, five years running.
Adrien had arranged to stay on for three days after the tournament to play a
few practice matches with Gustavo—at Gustavo’s request.

Adrien was a
little early, so he wandered over to the coffee machine. Gustavo was there,
frantically patting his jacket pockets, his face contorted in anguish.

After the
machine spat out two espressos, Adrien said, “Thanks again for having suggested
this practice. It’s a great opportunity.”

Gustavo took a
sip from his paper cup. “Ay! I burned my tongue.” He gave Adrien a plaintive
look before adding, “It was my pleasure.”

Adrien pursed
his lips, choking back a joke on the pleasures of burned tongues. This was
Gustavo del Rio, after all.

“Gustavo, I
may be a well-rated grand master, but I won’t be able to challenge you the way
Tokalov did earlier this week. Or the way your computer does any time you want,
for that matter.”

“Ah, I see
now.” Gustavo blew on his coffee. “My interest is in your style. It may not be
as aggressive as Tokalov’s or as well calculated as a computer program, but
it’s elegant. You play the most elegant chess, Adrien. And I like it.”

And he was. To
hear words of admiration from a better player—from the best player in the
world, as it happened—was gratifying.

He finished
his coffee and threw the cup into a trash can. “Have you seen the room where
we’re supposed to play?”

Gustavo threw
out his cup and shifted uneasily from one foot to the other. “I’m not sure I
can find the way. You see, my assistant got a stomach bug last night, so I’m
left to my own devices today.” He spread his arms. “I must say I’m completely
lost.”

As they
crossed the spacious lobby, Adrien thought about how thoroughly Gustavo’s life
was centered on chess. His absent-mindedness was legendary and when he
traveled, his longtime assistant Jimena was his key to survival, his lifeline.
When in Argentina he rarely left his house, which he shared with his mother.
Gustavo played chess most of his waking hours and, admittedly, in most of his
dreams. He played with a partner or a computer or—if he was stuck
somewhere without access to either—an imaginary contender.

They entered
the room where everything was prepared for their practice match. The local
organizers greeted them warmly and offered refreshments. Adrien stole a glance
at Gustavo who radiated good mood, now that there were people around to take
care of the practical side of life.

It takes this kind of single-minded
dedication to be the world’s top chess player. And I don’t have it.

Worse, he
didn’t even want to have it. Life was about more than chess. He wanted to save
a good chunk of it for his family, friends, a girlfriend, and the new family
they’d create someday.

Which meant
that even though he had enough talent, he’d never be the world’s top chess
player.

The Clandestine
Book Club embarked on its third day. The first two days, Natalie had been
excited and anxious in equal measure, her perception heightened by a sense of
transgression. But today was different. Today, she didn’t worry about being
caught. She knew she could do this. As it happened, she was beginning to turn
their act of civil disobedience into a reassuring routine—exactly what
little children needed and loved. Even the rebellious nap-skipping ones.

As soon as the
dormitory went quiet—barring a snore or two—Natalie made a sign,
and four pajama-clad munchkins tiptoed into the adjacent room.

“Of course,”
she whispered and helped him into his little sneakers. “Go. Just don’t run, OK?
We mustn’t wake the other children.”

Unlike this
batch, most of the kids in her group needed and enjoyed their afternoon nap.

Five minutes
later Téo joined his little friends on the floor cushions. In spite of their
tender age, the children were remarkably disciplined—they knew what was
at stake. If madam director caught them, she’d make them nap again and she’d
tell their teacher off.

So they sat
quietly, eyes brimming with excitement, while Natalie distributed the books. A
hardback about princesses for Samira, a coloring pad and crayons for Adèle, a
sticker book for Téo, and a book about cars and trains for Thomas. A few
minutes later, the club was in full swing.

It had all
started on Monday when Madame Blanc begged Natalie to allow her daughter to
skip the mandatory nap.

At first,
Natalie tried the party line. “I’m sorry, but it’s the policy of the Lafayette
School that all children in the Small Section should nap.”

“But the nap
is more than an hour long!” Madame Blanc exclaimed. “My daughter stopped
napping when she turned three in May. She’s lost the habit over the past five
months.”

“I understand.
And, believe me, I sympathize with her. I’ve got three more like her in my
group. They can’t sleep no matter how hard they try. They get so bored during
nap time.”

Madame Blanc
gave her a beseeching look. “Can’t you do something?”

“How about I
talk to madam director?” she suggested.

“I already
tried that. And got a long lecture on how it’s for my child’s good, how she
knows better than I do, and how this nursery school is the best in Paris. In
short, the answer was no.”

Natalie
concentrated on not sneering at the spot-on summary of the director’s pedagogic
philosophy.