Authors: The Spirit of the Border 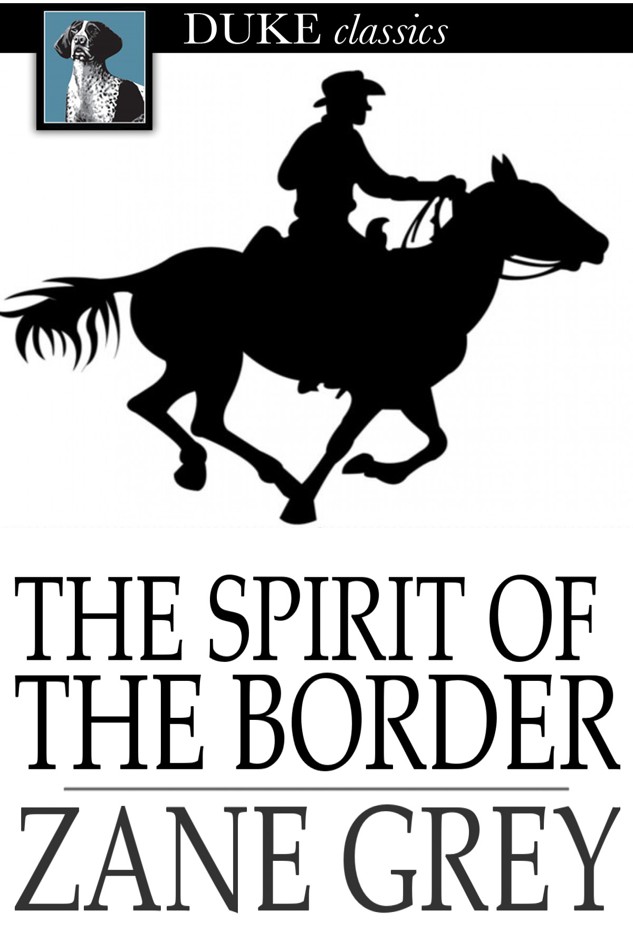 THE SPIRIT OF THE BORDER
* * *
ZANE GREY

With many fond recollections of days spent in the solitude of the
forests where only can be satisfied that wild fever of freedom of
which this book tells; where to hear the whirr of a wild duck in his
rapid flight is joy; where the quiet of an autumn afternoon swells
the heart, and where one may watch the fragrant wood-smoke curl from
the campfire, and see the stars peep over dark, wooded hills as
twilight deepens, and know a happiness that dwells in the wilderness
alone.

The author does not intend to apologize for what many readers may
call the "brutality" of the story; but rather to explain that its
wild spirit is true to the life of the Western border as it was
known only a little more than one hundred years ago.

The writer is the fortunate possessor of historical material of
undoubted truth and interest. It is the long-lost journal of Colonel
Ebenezer Zane, one of the most prominent of the hunter-pioneer, who
labored in the settlement of the Western country.

The story of that tragic period deserves a higher place in
historical literature than it has thus far been given, and this
unquestionably because of a lack of authentic data regarding the
conquering of the wilderness. Considering how many years the
pioneers struggled on the border of this country, the history of
their efforts is meager and obscure.

If the years at the close of the eighteenth and the beginning of the
nineteenth century were full of stirring adventure on the part of
the colonists along the Atlantic coast, how crowded must they have
been for the almost forgotten pioneers who daringly invaded the
trackless wilds! None there was to chronicle the fight of these
sturdy, travelers toward the setting sun. The story of their stormy
lives, of their heroism, and of their sacrifice for the benefit of
future generations is too little known.

It is to a better understanding of those days that the author has
labored to draw from his ancestor's notes a new and striking
portrayal of the frontier; one which shall paint the fever of
freedom, that powerful impulse which lured so many to unmarked
graves; one which shall show his work, his love, the effect of the
causes which rendered his life so hard, and surely one which does
not forget the wronged Indian.

The frontier in 1777 produced white men so savage as to be men in
name only. These outcasts and renegades lived among the savages, and
during thirty years harassed the border, perpetrating all manner of
fiendish cruelties upon the settlers. They were no less cruel to the
redmen whom they ruled, and at the height of their bloody careers
made futile the Moravian missionaries' long labors, and destroyed
the beautiful hamlet of the Christian Indians, called Gnaddenhutten,
or Village of Peace.

And while the border produced such outlaws so did it produce hunters
Eke Boone, the Zanes, the McCollochs, and Wetzel, that strange,
silent man whose deeds are still whispered in the country where he
once roamed in his insatiate pursuit of savages and renegades, and
who was purely a product of the times. Civilization could not have
brought forth a man like Wetzel. Great revolutions, great crises,
great moments come, and produce the men to deal with them.

The border needed Wetzel. The settlers would have needed many more
years in which to make permanent homes had it not been for him. He
was never a pioneer; but always a hunter after Indians. When not on
the track of the savage foe, he was in the settlement, with his keen
eye and ear ever alert for signs of the enemy. To the superstitious
Indians he was a shadow; a spirit of the border, which breathed
menace from the dark forests. To the settlers he was the right arm
of defense, a fitting leader for those few implacable and unerring
frontiersmen who made the settlement of the West a possibility.

And if this story of one of his relentless pursuits shows the man as
he truly was, loved by pioneers, respected and feared by redmen, and
hated by renegades; if it softens a little the ruthless name history
accords him, the writer will have been well repaid.

"So you must be, Master Joe, if often telling makes it true."

The girl spoke simply, and with an absence of that roguishness which
was characteristic of her. Playful words, arch smiles, and a touch
of coquetry had seemed natural to Nell; but now her grave tone and
her almost wistful glance disconcerted Joe.

During all the long journey over the mountains she had been gay and
bright, while now, when they were about to part, perhaps never to
meet again, she showed him the deeper and more earnest side of her
character. It checked his boldness as nothing else had done.
Suddenly there came to him the real meaning of a woman's love when
she bestows it without reservation. Silenced by the thought that he
had not understood her at all, and the knowledge that he had been
half in sport, he gazed out over the wild country before them.

The scene impressed its quietness upon the young couple and brought
more forcibly to their minds the fact that they were at the gateway
of the unknown West; that somewhere beyond this rude frontier
settlement, out there in those unbroken forests stretching dark and
silent before them, was to be their future home.

From the high bank where they stood the land sloped and narrowed
gradually until it ended in a sharp point which marked the last bit
of land between the Allegheny and Monongahela rivers. Here these
swift streams merged and formed the broad Ohio. The new-born river,
even here at its beginning proud and swelling as if already certain
of its far-away grandeur, swept majestically round a wide curve and
apparently lost itself in the forest foliage.

On the narrow point of land commanding a view of the rivers stood a
long, low structure enclosed by a stockade fence, on the four
corners of which were little box-shaped houses that bulged out as if
trying to see what was going on beneath. The massive timbers used in
the construction of this fort, the square, compact form, and the
small, dark holes cut into the walls, gave the structure a
threatening, impregnable aspect.

Below Nell and Joe, on the bank, were many log cabins. The yellow
clay which filled the chinks between the logs gave these a peculiar
striped appearance. There was life and bustle in the vicinity of
these dwellings, in sharp contrast with the still grandeur of the
neighboring forests. There were canvas-covered wagons around which
curly-headed youngsters were playing. Several horses were grazing on
the short grass, and six red and white oxen munched at the hay that
had been thrown to them. The smoke of many fires curled upward, and
near the blaze hovered ruddy-faced women who stirred the contents of
steaming kettles. One man swung an axe with a vigorous sweep, and
the clean, sharp strokes rang on the air; another hammered stakes
into the ground on which to hang a kettle. Before a large cabin a
fur-trader was exhibiting his wares to three Indians. A second
redskin was carrying a pack of pelts from a canoe drawn up on the
river bank. A small group of persons stood near; some were
indifferent, and others gazed curiously at the savages. Two children
peeped from behind their mother's skirts as if half-curious,
half-frightened.

From this scene, the significance of which had just dawned on him,
Joe turned his eyes again to his companion. It was a sweet face he
saw; one that was sedate, but had a promise of innumerable smiles.
The blue eyes could not long hide flashes of merriment. The girl
turned, and the two young people looked at each other. Her eyes
softened with a woman's gentleness as they rested upon him, for,
broad of shoulder, and lithe and strong as a deer stalker, he was
good to look at.

"Listen," she said. "We have known each other only three weeks.
Since you joined our wagon-train, and have been so kind to me and so
helpful to make that long, rough ride endurable, you have won my
regard. I—I cannot say more, even if I would. You told me you ran
away from your Virginian home to seek adventure on the frontier, and
that you knew no one in all this wild country. You even said you
could not, or would not, work at farming. Perhaps my sister and I
are as unfitted as you for this life; but we must cling to our uncle
because he is the only relative we have. He has come out here to
join the Moravians, and to preach the gospel to these Indians. We
shall share his life, and help him all we can. You have been telling
me you—you cared for me, and now that we are about to part I—I
don't know what to say to you—unless it is: Give up this intention
of yours to seek adventure, and come with us. It seems to me you
need not hunt for excitement here; it will come unsought."

"There's nothing much to tell. He and I are all that are left of our
people, as are you and Kate of yours. Jim's a preacher, and the best
fellow—oh! I cared a lot for Jim."

"Then, why did you leave him?"

"I was tired of Williamsburg—I quarreled with a fellow, and hurt
him. Besides, I wanted to see the West; I'd like to hunt deer and
bear and fight Indians. Oh, I'm not much good."

"Was Jim the only one you cared for?" asked Nell, smiling. She was
surprised to find him grave.

"Yes, except my horse and dog, and I had to leave them behind,"
answered Joe, bowing his head a little.

"You'd like to be Jim because he's a preacher, and could help uncle
convert the Indians?"

"Yes, partly that, but mostly because—somehow—something you've
said or done has made me care for you in a different way, and I'd
like to be worthy of you."

"I don't think I can believe it, when you say you are 'no good,'"
she replied.

"Nell," he cried, and suddenly grasped her hand.

She wrenched herself free, and leaped away from him. Her face was
bright now, and the promise of smiles was made good.

"Behave yourself, sir." She tossed her head with a familiar backward
motion to throw the chestnut hair from her face, and looked at him
with eyes veiled slightly under their lashes. "You will go with Kate
and me?"

On the Plus Side by Vargo, Tabatha
What Piper Needs by Amanda Abbott
Finding the Forger by Libby Sternberg
Vegas Shuffle (Vegas Series) by Barbour, Mimi
Club Monstrosity by Petersen, Jesse
Untamed Wolf by Heather Long
LOGAN (BAD BOY BIKER ROMANCE) by Jacobs, Kyle
The Opium Room by Kendrick, Charisma
Sins of the Father by Jamie Canosa
Butterfly by Sylvester Stephens
Our partner