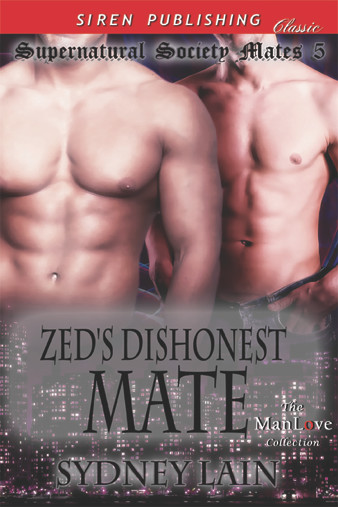 Zed and the leader of the elf territory have bickered back and forth for centuries. During one forced meeting, he meets the elf king’s son, Luka, a spoiled elf that doesn’t seem to care about anything.

Luka lives a tortured life, forced to play a game he doesn’t know how to stop playing. He longs for his mate to love him. One day he meets Zed, but his mate is not the loving man that has invaded his dreams night after night.

After being burned over and over again, Zed demands that everyone in his life be honest. After years of abuse, Luka doesn’t trust anyone. While waiting for Zed to hurt him, Luka tells his mate things he thinks Zed wants to hear. Can Zed learn to forgive all the lies? Will Luka learn to trust Zed with his heart?

If you have purchased this copy of
Zed’s Dishonest Mate
by Sydney Lain from BookStrand.com or its official distributors, thank you. Also, thank you for not sharing your copy of this book.

This is Sydney Lain’s livelihood. It’s fair and simple. Please respect Ms. Lain’s right to earn a living from her work.

Zed glared at the projection screen. He drummed the desk with his fingertips.
Tap. Tap. Tap.
Each impact reverberated through the room like a drip from a leaky faucet. Every time King Kane’s arrogant smirk filled the screen, his fingers pounded harder against the wooden surface. Soon there would be tiny holes in the cherrywood finish, a constant reminder that this day happened.

The head of the elf territory had cold, calculating eyes that never warmed. Ironically, Zed was considered the cold-blooded one. While vampires were chilly as death, elves symbolized life. They were often described by other supernaturals as warm and gentle. It was as though the pointy ears meant the same as a halo hanging above their heads. Thinking about that almost left him gagging. Lies and deceit had a way of getting stuck in his throat.

The elf king glared. Zed shrugged. It wasn’t his fault that his thoughts wandered to more important things, like should he put his left foot out before his right foot when walking down the hall.

He almost laughed at Kane’s sinister scowl. Others might have stuttered out apologies while their bodies shook, trying to appease Kane, but to Zed, the elf resembled a criminal about to get away with murder rather than a leader, and criminals didn’t deserve respect or fear-driven submissiveness. No, they deserved nothing but contempt. As the minutes passed, the condescending smirk appeared more often, and each time Kane’s lip arched upwards it fed Zed’s rage.

Kane couldn’t be trusted. There was something off, a smile too big that showed too many teeth, a laugh that never reached his eyes. At the first Supernatural Society Council meeting, two hundred years ago, just after the formation of the territories, Kane’s distrust sent an echo throughout the room. He voiced the fears of the other supernaturals.
It’s a trap to gain power, no one will respect the boundaries
, and so forth. He was a magnifying glass zooming in and enlarging the hate and animosity.

Not much had changed in the last two centuries. Kane was still a master manipulator focused on one priority, himself. Zed snorted each time someone referred to the elf as a leader. The man spent days preparing for a party, so every eye would be on him. When talks switched to politics, somehow Kane managed to turn the subject back to himself. If a shifter attacked an elf, he told a story of being chased by a shifter, leaving out the part where he robbed and tried to kill the man. No matter the topic of conversation, Kane needed to be the center of it.

“I want the area surrounding the Vortex to become part of my territory.”

Zed arched an eyebrow up. “My,” he repeated. “The territories belong to those that live within the borders, not to one person.”

Kane’s face turned red. “I want the area surrounding the Vortex to become part of
my
territory.” This time he emphasized the word “my.”

Zed shook his head. Kane yapped like a dog begging for attention. If someone popped into the room and offered to grant him a wish, he’d silence Kane, saving the world from that annoying, high-pitched screech. Then he’d never have to waste time playing this cat-and-mouse game with both of them vying to be the predator. The same question wouldn’t be repeated in some distorted attempt to gain the advantage like they were bargaining in a fair negotiation. In the end, it didn’t matter. Under no circumstance would he relinquish anything to Kane, not even a piece of lint, let alone property.

The screen flickered. He hoped the Internet crashed or the world ended. It didn’t matter as long as Kane stopped talking. Damn, the sound steadied and the projected image became sharper and clearer.

A part of him wished they were in the same room, not miles away relying on technology to communicate. His hand twitched, itching to wrap his fingers around the elf’s neck. When the Council ordered the two leaders apart, they could no longer meet in person. He shrugged. After repeated death threats and physically attacking each other, the Council worried that one of them would kill the other. Having one territory leader murder the other one just didn’t look good. That left virtual conferencing as their only form of conversation. And even that was forced by the Council.

It sucked technology had improved to the extent that the projection looked good. The ceiling-mounted speakers played crisp, clear sound, allowing Zed to hear each and every annoying word. He wanted to go back in time to garbled words and pixilated pictures.

Kane had a natural gift. He annoyed everyone with his constant disregard for others. The lies that never stopped coming irritated a lot of people. If he opened the dictionary, under the word “pathological liar” would be a picture of Kane.

He so wanted to wipe the smug expression off Kane’s face. His hand twitched at the thought. The elf had played a part in selling drugs at the Vortex, a club located within his territory. Zed had foolishly hoped that the club burning down would end the petty demands, but when Kane saw something of interest, he was like a starving tiger ready to jump on a plump bunny.

The elf king’s ego allowed for nothing else. From the beginning, he’d manipulated the entire situation. It started when Micah, Roman Walker’s mate, killed two elves inside the Vortex, and it wouldn’t end until Kane got everything he wanted. Zed didn’t blame Micah. The small human did what was necessary to save his life. The elves were playing around with a supernatural drug that might have destroyed them, but Micah intervened first.

Zed sighed. Micah’s power to control others allowed him to kill the threat to his life. The small human had a lot to deal with. The guilt might have destroyed him, but his mate kept Micah sane and helped him deal with the truth. Zed couldn’t imagine being able to take the will of another person. He didn’t envy the small human.

Still, Zed hated the false accusations. If he’d killed the elves, he would have said so. These stupid games never interested him. Truth mattered more. Lies had a way of hurting and led to mistrust. Once trust was lost it never came back. He refused to lie and took pride that only the truth slipped from his lips.

Kane accused him of being a lying murderer. Then he went on to demanded compensation. If it had been anyone else, he’d give in because the sense of responsibility was too heavy of a weight to carry. The two elves that died were different. They had been a part of creating the drugs sold inside of the club. The drugs ultimately led to their deaths and now their deaths were reduced to a political advantage.

Zed’s hands formed tight fists. “Compensation?” he questioned, forcing Kane to smirk again. Zed snorted. The elf king probably didn’t know the elves’ names. That would be too trivial to bother with. Even worse, the “compensation” wasn’t for the families. No, it was all for Kane, the person responsible for running the drug operation. He probably chose the Vortex as a screw-you move.

Somebody Told Me by Stephen Puleston
Three (Article 5) by Simmons, Kristen
Alison's Automotive Repair Manual by Brad Barkley
Courted by Karma (The Adventures of Anabel Axelrod) by Ellen, Tracy
Undeniable by Bill Nye
Bird Eating Bird by Kristin Naca
Shadows on the Aegean by Suzanne Frank
More Than You Know by Jo Goodman
Janet by E. L. Todd
Trading with Death by Ann Girdharry
Our partner