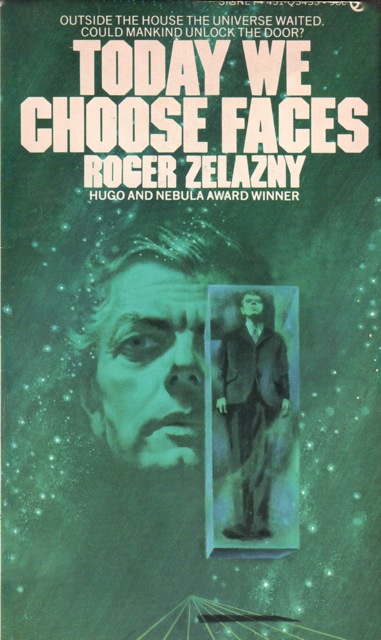 A bolt of lightning, followed by an infinite
sigh …

A slow shower of jigsaw pieces, some of them
coming together about me ...

It was as if I had known all along, though.

Then the picture was complete, and I beheld it
in its entirety as from a timeless vantage.

There was a sequence, of course, like
vertebrae or dominoes, and it was not at all difficult to here, here, there it.

... Leaving the club on a cold Saturday night
in November. A little after
10:30
, I guess. Eddie was with me, and we stood
behind the glass doors at the front of the place, buttoning our overcoats and
looking out at a damp Manhattan street, gusts of wind sailing bits of paper
past us, while we waited for Denny to bring the car around. We said nothing. He
knew I was still in a bad temper. I took out a cigarette. He hurried to light
it for me.

Finally, the glossy black sedan drew up. I had
just pulled one glove on and was holding the other. Eddie moved forward and
opened the door, held it for me. I stepped outside and the chill air stung my
eyes, bringing tears to them. I paused to get out a handkerchief and wipe them,
mainly conscious then of the wind, the idling of the engine and a few distant
horn notes.

As I lowered the handkerchief I became
immediately aware of another figure which had appeared in the car, in the rear
seat, and in the same instant realized that the rear window was down and that
Eddie had moved six or seven paces away from me.

I heard some of the gunfire, felt the impact
of a couple of the slugs. It was to be a long while before I learned that I had
been hit four times.

My only consolation right before the lights
went out was, twisting as I fell, seeing the smile vanish from Eddie's face,
his hand jerking after, but not making it to his own weapon, and then the slow
beginning of his topple.

And that was the last I ever saw of him,
falling, an instant before he hit the pavement

Listening to Paul talk, I regarded what could
have been a lovely view of a bright mountain lake fed by a little stream, a
giant willow tree quivering beside it as if chilled by the water it tested with
the green and shiny tips of its limbs. It was a fake. That is, it was real, but
the picture was relayed from a spot hundreds of miles away. It was more
pleasant than looking out a window from his upper-floor apartment, though, when
all I could see would be a section—albeit a neat, attractive area—of that urban
complex which extended from New York to Washington. The suite was soundproof,
air-conditioned and I suppose tastefully decorated in accordance with the best
sensibility of the times. I could not judge, since I was not yet familiar with
the times. Its brandy was excellent, though.

"... Must have been puzzling as all
hell," Paul was saying. "I am amazed at how quickly you have
adapted."

I turned and looked at him again, a slim,
still-young, dark-haired man with an engaging smile and eyes that really told
nothing of what went on behind. He was still a thing of fascination for me. My
grandson, with six or seven greats in front of the word. I kept looking for
resemblances, finding them where least expected. The jut of the brow, the short
upper lip, heavy lower one. The nose was his own, but then he had our way of
quirking the left corner of his mouth at moments of pique or amusement.

I sent the smile back.

"Nothing that amazing about it," I
replied. "The fact that I made the provisions I did should have indicated
I had done some thinking about the future."

"I guess so," he said. "But to
tell the truth, my only thought was that you had been looking for an out on
death."

"Of course I was. I was aware of the
possibility of my getting it the way that I did, and while body-freezing was
still a fairly novel thing back in the 'seventies—"

'The nineteen-seventies," he interrupted,
with another smile.

"Yes, I do make it sound like just a
couple of years ago, don't I? Try it sometime and you will understand the feeling.
Anyway, I figured what the hell. If I got shot down, whatever got damaged might
be replaceable— someday. Why not set things up to have them freeze me and hope
for the best? I had read a few articles on the subject, and it sounded like it
might work. So I did. After that, it was funny . . . It got to be kind of an
obsession with me. I mean, I got to thinking about it quite a bit, the way a
real religious man might think about heaven—like, ‘When I die, I'll go to the
future.' Then I found myself wondering more and more what it would be like. I
did a lot of thinking and a lot of reading, trying to figure different ways
that things might work out. It wasn't a bad hobby," I said, taking another
drink. "It gave me a lot of fun, and as things turned out it's paying
off."

"Yes," he said. "So you were
not really surprised to learn that a means of traveling faster than light was
developed, and that we have visited worlds beyond the solar system?"

"Of course I was surprised. But I had
been hoping for it."

"And the recent successes in
teleportation, on an interstellar scale?"

"I was more surprised at that.
Pleasantly, though. Hooking the outposts together that way will be a great
achievement."

"Then let me ask you what you have found
the most surprising."

"Well," I said, finding myself a
seat and taking another sip, "outside of the fact that we managed to get
this far and still have not found a way to remove the possibility of war—"
I raised a hand at this point as he began to interrupt me with something about
controls and sanctions. He shut up. I was glad to see that he respected his
elders. "Outside of that," I went on, "I suppose that the single
most surprising thing to me is that we have gone more or less legitimate."

"We are as legitimate as anybody,"
he countered, "or we would never have been able to get listed on the World
Stock Exchange."

I said nothing, but found another smile.

"Of course, it is a very well-run
organization."

"I would be disappointed if it were
not."

"Just so, just so," he said.
"But there we are. COSA Inc. All legal, proper and respectable. Been that
way for generations. The tendency in that direction had actually begun in your
day, with—as feature writers liked to put it—the 'laundering' of funds and
their reinvestment in more acceptable enterprises. Why fight the system when
you are strong enough to be big in it without fighting? What are a few dollars
one way or the other when you can have everything you want and security, too?
Without the risks. Just by following the rules."

"Well, there are so many that it has
become, if anything, easier, when you can afford the brainpower."

He finished his drink, fetched us refills.

"There is no stigma," he concluded
then. "The image we had in your day is ancient history now."

"It must really have been something,
though, living in those times," he said, and then he looked at me
expectantly.

I did not know whether to be irritated or
flattered. From the way they had been treating me since my arousal a couple of
weeks earlier, I obviously shared some historical niche with the bedpan and the
brontosaurus. On the other hand, Paul seemed to regard me with more than a
little pride, rather like a family heirloom which had been entrusted to his
keeping. By then, I was aware that his position in the organization's power
structure was both secure and potent He had insisted that I be his houseguest,
though I could have been put up elsewhere. He seemed to take a great delight in
getting me to talk about my life and times. I learned slowly that his knowledge
of these things was largely based on the gaudier writings, films and rumors of
the day. Still, I was eating his food, sleeping under his roof, we were
relatives and the statutes had long since run. So 1 obliged him with some
reminiscences.

It might have disappointed him that I had
spent a couple of years in college before taking over my father's business when
he met his sudden, untimely end, but the fact that I spent a chunk of my
earliest life in Sicily before he had sent for the family seemed to make up for
this. Then I believe I disappointed him again when I told him that to the best
of my knowledge there had never been a worldwide criminal conspiracy centered
there. I saw the onorata society as a local, not unbeneficial, family-centered
thing, which had in its time produced such notable galantuomi as Don Vito
Cascio Ferro and Don Cald Vizzini. I tried to explain that there was a
necessary distinction between the society degtt amici with its own, parochial
interests and individuals who migrated, who may or may not have been amici, who
engaged in illicit activities and preferred doing business with one another
rather than with strangers, and who preserved a strong family tradition. Paul
was as much a victim of the conspiracy mystique as any tabloid devourer,
however, and was convinced I was still preserving some secret tradition or
other. I gradually came to see that he was something of a romantic, that he
wanted things to have been the other way, that he wanted to be part of the
unreal tradition. So I told him some of the things I knew he would enjoy
hearing.

I told him how I had dealt with the matter of
my father's passing, as well as several other encounters which helped justify
my name, Angelo di Negri. Somewhere along the line, the family had later
changed it to Nero. Not that that mattered to me. I was who I was. And Paul Nero
smiled and nodded and lapped up the details. He had an infinite capacity for
secondhand violence.

All of which may sound somewhat contemptuous,
but is not, not really. For I came to like him considerably as time went on.
Perhaps this was because he reminded me somewhat of myself, in another time and
place—a softer, easier-going, more urbane version. Perhaps he was like
something that I might have been, or wished that I could have afforded the
luxury of trying to be.