Read Zero and Other Fictions Online

Zero and Other Fictions (8 page) 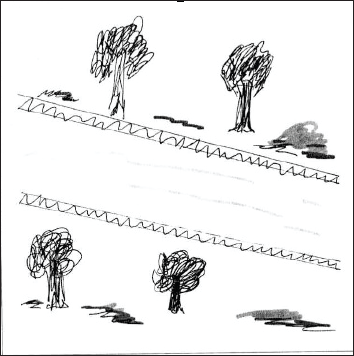 5
I was quite satisfied with the results and felt it could help explain the matter of how to measure the width of a ditch. So I inserted the picture in an envelope in preparation for finding someone on whom its usefulness could be tested.
At this point in the story, many readers might feel impatient. If that is the case, I have a number of suggestions:
1. You can immediately stop reading and think of a way to forget what you have read.
2. You must be anxious to learn how the author measured the width of the ditch. If that is the case, I will tell you. At the time we carried a bow and arrows. We tied a string to the end of the arrow and shot the arrow into the bark of a tree on the opposite side of the ditch. Then we pulled the arrow back and measured the length of the string, and we had our answer.
3. If you are dissatisfied with the above two suggestions, I'll make another. For the moment don't think about how to measure the width of a ditch and patiently keep on reading.
I gave the young lady at the Environmental Protection Department another call.
“I called a few days ago and asked how many ditches there are. Do you remember?”
“Ah!” she cried out softly.
“My name is Xie.”
“I didn't expect you to call again, Mr. Xie.”
“Why not?”
“People always call me.” She continued, “May I ask why you are so interested in that question?”
I detected a sound. I guessed that it was the sound of someone covering their mouth to laugh.
“A lot of people ask the same question, but for the moment I can't explain it.” I said, “How about this. Are you busy? I'll buy you a cup of coffee.”
“I don't go out with strangers.”
“I'm no stranger. I told you who I am.” I had told her my profession and age. “Besides, I can meet you at your office. Public offices such as yours have someone responsible for answering people's questions, right? In this way, I'm just trying to adopt a more informal approach.”
“Can I bring a colleague?”
Pouring out your heart to someone uninvolved is risky, but also exciting.
Thus I carried a copy of the
United Daily News
(this was our prearranged signal). I waited at the coffee house for five minutes before two young ladies appeared.
“Mr. Xie, this is my colleague Miss Ma.” I asked them to have a seat. Miss Ma, who was wearing glasses, was tittering.
“It's very funny, isn't it?” I asked.
“No need to ask.” Miss Chen laughed as well. “Miss Ma and I work in the same office. I told her about the matter you mentioned.”
I laughed too. Laughing, I sighed to myself as I sized up the two young ladies, their mediocre looks and their childish makeup.
“You must both be curious, right?”
“Yes!” said Miss Chen. “I receive several strange phone calls every day, but yours is the strangest of all.”
“It's so interesting!” commented Miss Ma.
“What kind of strange calls?” I asked.
“One guy called and said there was a snake burrow in his rooftop garden. I told him to call 911.”
“How interesting!” said Miss Ma.
I figured the next thing she was going to say was “How amusing!”
“Don't think for a moment that I'm joking. If an atomic bomb were to explode, just think of how many people could take shelter in the underground ditches. If an atomic bomb went off, everything on the streets would be incinerated. The only thing on your mind then would be to flee into an underground ditch, shouting as you did so, âLook at this ditchâwhy didn't the city government make it larger?'”
“How frightening,” said Miss Ma, adding her two cents.
I stared at her as I continued, “That's why I have developed the habit of measuring ditches. Whenever I pass a ditch, whether it is concealed underground or in the open, I can't help but ask myself, âHow wide is it really? How many people will fit into it?' That's why I called to ask how many ditches there are in the city and what method you use to measure them.”