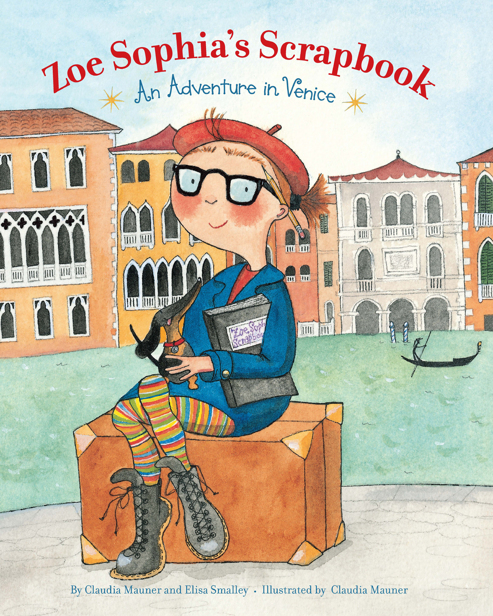 For Zoe and Doris, who inspired this book; for my parents, who made it all possible; and for Mickey— Claudia Mauner

To Robert, William and Matthew with all my love— Elisa Smalley

Our thanks to Doris Alexander, Meg Cabot, Joel Foster, Eleonora Riva and Rosemary Stimola for their invaluable contributions to this book.

My name is Zoe Sophia and I am nine years old. People tell me I’m wise for my age, even though I’m only four feet two. I live on the Upper West Side of Manhattan. The door to my building is easy to find because it has a big purple awning out front. The doorman is Victor Gonzales. He is a good friend of mine and has shiny gold buttons on his uniform coat, just like a palace guard. I love living in New York. There is so much to do here, like eating hot pretzels on the steps of the Metropolitan Museum of Art, trying on sunglasses at the Columbus Avenue flea market and walking my dachshund, Mickey, along Riverside Drive.

Mickey and I love Manhattan, but traveling to faraway places is exciting, too. Tonight is super special because we are flying to Venice, Italy—Venezia—for the first time to visit my great aunt Dorothy Pomander, who is a writer. (That is what I want to be when I grow up.) D. P. is my very favorite person in the whole wide world. D. P. hasn’t seen me in a while, so my mother gave me a red beret to wear, so I would be easy for her to spot. Mickey is wearing asilver tag on his collar with “Mickey, The Antwerp, Manhattan, New York” engraved on it. Dorothy has a marmalade cat named Pip.

(Boeing 763, 2-engine, wide-bodied plane, wingspan 156 ft. and 1 inch, seating capacity 229.) It’s going to take us eight and a half hours to get there! But they have great things like peanuts and headphones and even flight attendants with press-on nails.

We’re about to land at Marco Polo Airport. I can see Venice from the window! The streets are filled with water down there. Dorothy says they’re called canals. She also says Venice is slowly sinking into the sea. I hope it doesn’t sink while we’re there!!!

I see Dorothy!!! We greet each other Italian style: a kiss on both cheeks (kiss =
bacio
). This takes a while.

On the Vaporette with M. and D.P. and P.

The oldest way to get around Venice is by gondola. These are long, skinny black boats, kind of like water limos. Imagine a gondola traffic jam at rush hour! But to get to Great Aunt Dorothy’s, we’re taking a vaporetto, which is like a boat-bus that drops people off at different stops. I feel like a pirate princess sailing the windy seas. After ten minutes we’re at Dorothy’s stop near the Accademia art gallery. There is even a gangplank!

Dorothy’s doorway is not easy to find. There is no purple awning and no doorman. We have to wind our way up narrow steps to reach Dorothy’s flaton the top floor of an old villa. Mmmmmm…her place smells of gingersnaps, my favorite.

Dorothy’s living room, or salotto, is filled with art. She fancies herself a bit of a collector.

She tells me she bought this Mitsukoshi years ago in New York for a song, which at the time was a lot of money. It requires regular dusting.

My favorite is a large blue picture with green and purpleanimals that hangs over the fireplace. Dorothy tells me that the painting, which is by Chagall, was given to her by a Russian admirer named Boris many years ago in Paris. (Dorothy has gobs of unusual friends.) We have Chagalls in New York, too, I tell her. There are two giant paintings by him inside the Metropolitan Opera House. I’ve seen them myself.

I cannot believe it. Dorothy has framed my, yes my, very own artwork. There is even a plaque.

PORTRAIT OF SELF WITH DOG

First off, we’re having breakfast, la prima collazione, which means “the first meal.” (Thank goodness—I’m starving!!!) We’re having cornetti, a kind of croissant sprinkled with sugar on top (YUM!), and spremuta, juice. Dorothy has coffee, to get her eyes open, she says. Dorothy’s dining room looks out onto the gondola repair shop. Dorothy says that gondolas frequently need touch-ups, just like people.

Lady Barbara's Dilemma by Marjorie Farrell
Watching Eagles Soar by Margaret Coel
Winter Howl (Sanctuary) by Evans, Aurelia T.
Remember to Forget by Deborah Raney
Temporary (Indelibly Marked #2) by Kim Carmichael
A bucket of ashes by P.B. Ryan
Man in the Gray Flannel Suit by Sloan Wilson
Life After a Balla by D., Jackie
Ana Seymour by Father for Keeps
Lord of the Silver Bow by David Gemmell
Our partner