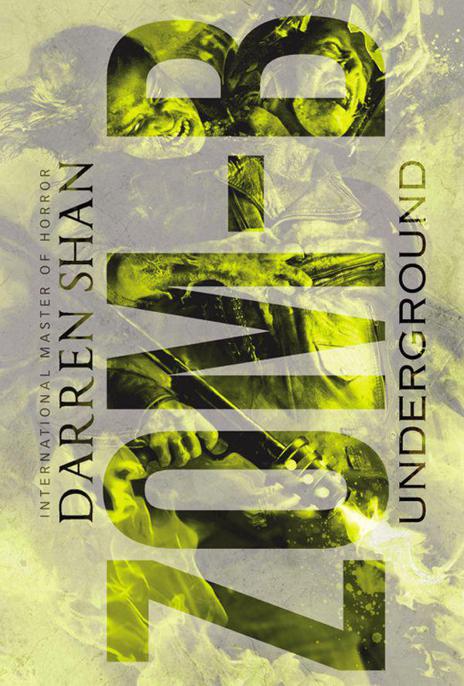 OBE (Order of the Bloody Entrails) to:

Edited in an underground complex by

Mr. Dowling is available for birthday parties and is represented by:

Becky Smith’s father was a bully and a racist. He often beat B and her mum, when he wasn’t working hard to stop the flow of immigrants into the country. B loved and feared him equally. She swore to herself that she didn’t share his vicious, racist tendencies, but at the same time she never challenged him about them.

One of B’s teachers, Mr. Burke, warned her that she risked becoming just like her dad if she continued to play along with him. But B had never paid much attention to what teachers said.

B was a tomboy and could hold her own with any guy her age. She liked music, surfing the Web, hanging out with her
mates. Just an average girl who thought she’d lead a normal life and never do anything special.

Then zombies attacked her school. B and her friends didn’t know how the dead had come back to life, or why so many of them were on the loose, or what the strange mutants who could control them were. And there was no time to find out. They had to run or die. So they ran.

B’s dad rescued her. He led the group to safety, playing the part of a hero to perfection. Until they hit a snag and zombies closed in on them. To delay the zombies, he told B to throw a black boy named Tyler Bayor to them. And because she had always obeyed her father when he gave her a command, she did. The zombies bit into the screaming Tyler with relish as he begged B to save him.

Horrified by what she’d done, B abandoned her monstrous dad and raced back into the school, to search for another way out. But she only found zombies and mutants. Or rather, they found her.

On a staircase, the freshly zombified Tyler caught up with B. She had been scratched by another member of the undead and was terrified that she was about to turn into one of them. But Tyler took her mind off that worry when he ripped her chest open. The last thing she saw was Tyler biting into her still-beating heart.

I smell burning hair. It’s a nasty, acidic smell. I burned my eyebrows once when I was playing with a lighter and I’ve never forgotten that foul aroma. As my face wrinkles with distaste, an even nastier stench kicks in and I almost gag. What the hell
is
that?

As I’m trying to place the sickening scent, a tall man staggers past, face and skull ablaze, trying to slap out the flames but failing. He falls to his knees and shakes his head wildly from side to side, the flames growing thicker, glowing more brightly. And I peg the source of the smell.

With a startled cry, I flail away from
the man on fire and glance around desperately for something to quench the flames with, or someone to call for help. It takes all of two seconds to realize I’m in just as much trouble as the guy with the burning pumpkin for a head.

I’m in a large room. Not one I recognize. I should be in my school, but this is a place I’ve never seen before. Pure white walls, except where they’ve been scorched. Several oversized windows, lots of people on the other side of the glass, peering in, studying the chaos.

There’s a small team at the center of the room, six people in black leather pants and jackets, faces hidden behind the visors of motorcycle-type helmets. Each is armed, a couple with flamethrowers, another pair with stun guns, two with spears.

Lots of figures surround the six in leathers. Fifteen or so men, a handful of women, a couple of teenagers, a girl no more than eight or nine years old. Except they’re not normal people. They’re zombies.

I categorize them even before the memories of what happened at my school click into place. I’ve seen enough horror films to know a fully paid-up member of the living dead when I see one. They don’t move as stiffly as most movie zombies, but they have the vacant expression, they’re missing body parts, some are caked in blood, their teeth are gnashing together hungrily, they’re covered in scars and cuts, and wisps of green moss grow over their wounds.

Wait… I never saw moss in any of the movies. I only saw that on the zombies in the Internet clips of the attack in Pallaskenry.
And on those who struck when my school was attacked. When
I
was killed.

I flash on a memory of Tyler Bayor jamming his hand into my chest and ripping out my heart. I moan pitifully and my hands snake to my breast to find out if that really happened or if it was just a dream. But I’m distracted before I can check.

One of the leather-clad tormentors at the center of the room is bigger than the others, tall and burly. He breaks away from the group and sprays flames in a wide semicircle, scorching the zombies closest to him. They squeal and peel away. It seems like the dead can feel pain too.

“Rage!” one of the others barks. “Get your arse back here. We’ve got to stick together.”

“Sod that,” the tall one retorts, and pushes forward, coming towards me, letting fly with more flames.

I forget about everything else and flee from the fire, survival instincts kicking in, following a man and woman who were singed from the last burst. I try to call to the guy in the leathers, to plead with him to stop, but there’s something wrong with my mouth. It feels like it’s full of pebbles. All that emerges is a strangled “
Urrggghh! Ugga gurhk!
” sound.

One of the zombies–a woman–leaps onto the tall guy’s back and gnaws at his shoulder. He lowers his flamethrower, grabs her hair and tugs. She claws at his helmet. He bends over to shake her off.

While I’m not naturally inclined to side with a zombie, it’s clear
that we’re in the same boat. An enemy of theirs is also an enemy of mine. So I dart forward to help the undead woman tackle our foe with the flamethrower.

One of the others in the center yells a warning to the suitably named Rage, but it’s too late. I rush him from his blind side and throw myself at him. I probably wouldn’t be able to knock him over by myself, but the weight of the woman helps drag him down.

As the guy in the helmet yelps, I grab the hose of his flamethrower and wrestle it from him. He hangs on tightly, roaring for help, but then the woman bites his arm and digs through the leather of his jacket. With a curse, his grip loosens. A second later I’ve ripped the hose from the tanks strapped to his back and the device is rendered useless.

The person with the other flamethrower peels away from the group and starts towards me.

“Forget about him. We need you to cover the rest of us.”

As the woman hesitates, I heft the hose–it feels quite solid–and move in on the guy on the ground. He’s pushing the female zombie away, trying to make room to kick at her. I take a couple of practice swings, then let him have it, bringing it down as hard as I can over the top of his helmet.

The guy bellows with pain and backs away from me as I swing at him again. The zombie gurgles and shoves me aside, hurrying
after him, clawing at his legs like a cat as she tries to grab hold. My gaze fixes on the small bits of bone sticking out of the ends of her fingers and I’m stopped in my tracks by another flashback.

I glance down at my own hand and see bones jutting out of my fingers too. I drop the hose and clutch the hand to my chest, moaning softly. I check the other fingers and find more extended bones. I raise my head and shriek at the ceiling, a wordless cry of frustration and terror.

The guy on the floor lashes out with a foot and connects with the zombie’s head. She’s driven back. He forces himself to his feet and staggers towards the safety of his pack. Other zombies throw themselves in his path, clutch at him, gnash at his gloved fingers. But he’s strong and moving fast. He brushes them aside as if they were mannequins, then slips behind the woman with the flamethrower and picks at the material around the place where the zombie bit him, examining his wound.

I chuckle sickly at the sight of the guy studying his arm. The bite of a zombie is contagious. He’s finished. Any minute now he’ll turn into one of them, and good riddance to the bugger. I’ve no sympathy for anyone who tries to burn me alive.

I look at my fingers again and the chuckle dies away at the back of my throat as I’m forced to correct myself. He’ll turn into one of
us
.

A siren blares and panels slide open in the ceiling. As I stare, bewildered, nets drop through the gaps and fall on several of the zombies. There must be weights attached to the nets, because the
zombies stagger, then fall. They become entangled as they writhe on the floor and are quickly trapped.

More nets drop and the rest of the zombies are swiftly subdued. They hiss and roar defiantly, and some try to flee, but the nets find them all, even the little girl. Soon I’m the only one left standing. For some reason they haven’t targeted me. I squint at the ceiling as the panels are replaced, waiting for the area above me to open, but I’m either standing in a spot where they can’t get at me or for some reason they don’t want to ensnare me.

“Do you think I should toast this one?” the woman with the flamethrower asks, advancing past the struggling zombies.

I snarl at her and try to shout a curse, but again all that comes out is a gargled noise, something along the lines of “
Fwah ooo!
”

“Hold on,” somebody says, and a guy with a spear puts it down, then removes his helmet. I stare uncertainly. It’s a boy, my sort of age, maybe a bit younger. The rest start to take off their helmets and I’m astonished to find that all of them are teenagers. I look for a familiar face, but they’re all strangers to me.