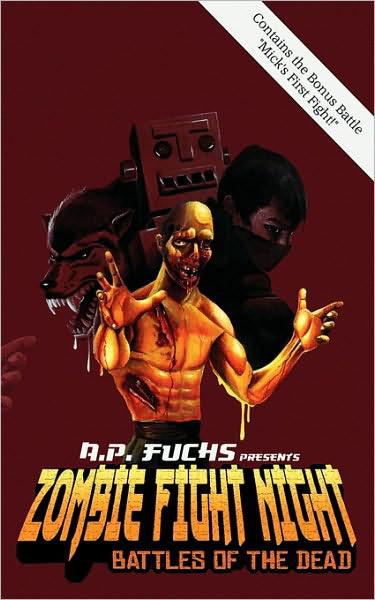 Blood of the Dead

Episode No. 0: First Night Out

Episode No. 1: The Dead Land

Of Magic and Men (comic book)

Elements of the Fantastic

Book Marketing for the

The Hand I’ve Been Dealt

Haunted Melodies and Other Dark Poems

Still About A Girl

This book is a work of fiction. Names, characters, places and events either are products of the author’s imagination or are used fictitiously. Any resemblance to actual places, events or persons living or dead or living dead is purely coincidental.

Zombie Fight Night: Battles of the Dead is Copyright © 2010 by Adam P. Fuchs. All rights reserved, including the right to reproduce in whole or in part in any form or medium.

This is for those who get their face kicked in for a living, those who aspire to get a fist to the face while dishing it out to the other guy, and to those of us who like watching them.

The following is a book about zombies, fighting and . . . well, that’s about it. Although a story has been crafted to book end the tale, its main focus is blood, guts, UFC-style fisticuffs, monsters and cage matches. I mean, robots versus zombies is cool no matter how you lay it down.

Why did I write a book that’s all about throwing fists? The short answer: I’m a guy and this is what we do.

Putting it a bit longer: I love kung fu movies, action flicks and, growing up, was a big time Jean Claude Van Damme fan, whose movies were a bit of both.
Lionheart
?
Bloodsport
?
Death Warrant
? Couldn’t tell you how many times I watched those flicks. What I especially liked about his movies was they always had two things in common: he always learned to do the splits at some point during the film, and he always finished off the bad guy with that big 360˚-kick of his.

I got goosebumps every time I saw that stuff. Nothing but adrenaline-charged fighting.

Even when I found out the other week they made a third
Universal Soldier
movie I was geeking out.

There’s a magic to fight movies that you don’t get anywhere else even with, say, superhero flicks. At the same time, they do have that
hero
quality, the one where the good guy lands the finishing blow and you geek out inside because the bad guy got what was coming to him.

And that’s what this book is about. It’s an action flick told in novel form. It’s a B-horror/martial arts movie blend stuffed between two covers.

So with that said—

9:
Gettin’ Ready to Rock and Roll

15:
The Bald Guy in the Spider-Man Shirt

17:
The Old Man Just Sits There

21:
A Hard Kind of Loathing

Mick Chelsey couldn’t believe it had come to this.

He stood outside Blood Bay Arena, hands shaking. His left cheekbone hurt from when his wife, Anna, slapped him. She was right. He was pathetic, an addict and a downright lousy husband.

Some provider I turned out to be, eight hundred and twenty-one thousand dollars. I’ve gotten us in way over our heads
.

The enormous stone structure of the arena loomed over him like a judge pointing a finger, condemning him to a sentence he wasn’t sure he could face.

Eight hundred and twenty-one thousand dollars. How could any man repay that?

How could any man
lose
that?

For a moment he wished it was ten years ago and he could get back to being in his late twenties where the biggest bet he lost was a couple hundred bucks. But it was also ten years ago the world changed.

The story was different depending on who you heard it from, but there was a common thread that united them all: a Middle East chemical spill and a small town. Some folks said the spill occurred near some old tombs outside the town, the mysterious substance having washed over the rocks, drops of it leaking through the cracks and reanimating whatever remains there were within. The only problem Mick had with that story was if indeed this happened, how could these fragments of bone and dust suddenly get up and walk around and, better yet, move the heavy rocks away from the tomb entrance so the once-dead person could roam about?

Another tale said the spill occurred
in
the town as the trucker hauling the stuff was passing through. After the accident, the bizarre liquid running everywhere, all who touched it were transformed into something neither living nor dead, but caught somewhere in the middle.

Mick believed the latter story. There really weren’t any other tales floating around out there that adequately explained it. Nothing plausible, anyway.

The undead had quickly covered the Middle East, all having a strange need to feed on human flesh. Those they didn’t devour were changed—
infected
—and became one of them. Somehow, one got on a boat undetected. The infection spread. Soon nearly every country in the world was being overtaken by the mindless creatures.

Nearly every superpower that had the capability wanted to nuke the creatures. This idea was quickly vetoed at a UN hearing because, given the instability of each nation and the frame of mind of the desperate leaders in charge, nuclear winter would have been sure to follow and humanity would have vanished forever.

Instead, the slow-but-steady approach was taken and troops were re-trained using Intel gathered from around the globe as to where the dead roamed, how they operated and how they could be disabled.

Working together, humanity unleashed its forces and slowly but surely overcame the creatures. Millions of troops went out. Less than a quarter of that came home.

Some of the undead were captured and kept for observation. Some were tortured for fun. Many were bought at a high price by Mr. Tony Sterpanko, a self-made billionaire entrepreneur before what the media had dubbed the “Zompocalypse” and one of the few who found a way to hang onto their cash when money became obsolete for a time. It was these few who led the world economically once order was reestablished, but Sterpanko was the leader of them all.

He began a little program for all who were willing to come and watch as humanity had its revenge on the undead up close and personal.

It was called Zombie Fight Night.

And the whole world was watching either at Blood Bay Arena or on TV or the Internet.

Fighters from around the world came to exact revenge on the monsters that stole their loved ones and ravaged their cities. Other creatures who once posed a threat to mankind now allied with it to destroy the remainder of the dead. Others thought to be fable now existed and came forward to battle, the Space-Time Continuum having gone bust thanks to the unnatural rebirth of that which was dead. Worlds and universes collided—or so the theorists said—and those out of folklore wandered into our world. Zombie Fight Night was the most profitable business on the planet.

Silk Sails by Calvin Evans
Linna : Historical Romance (The Brocade Collection, Book 5) by Jackie Ivie
Dragonwriter by Todd McCaffrey
The Assassin and the Girl From the Coffee Shop by Terry Towers
Forgotten Mage by D.W. Jackson
wicked witches 06.9 - you only witch once by lee, amanda m
The Gum Thief by Douglas Coupland
The crying of lot 49 by Thomas Pynchon
La paciencia de la araña by Andrea Camilleri
An Outrageous Proposal by Maureen Child
Our partner