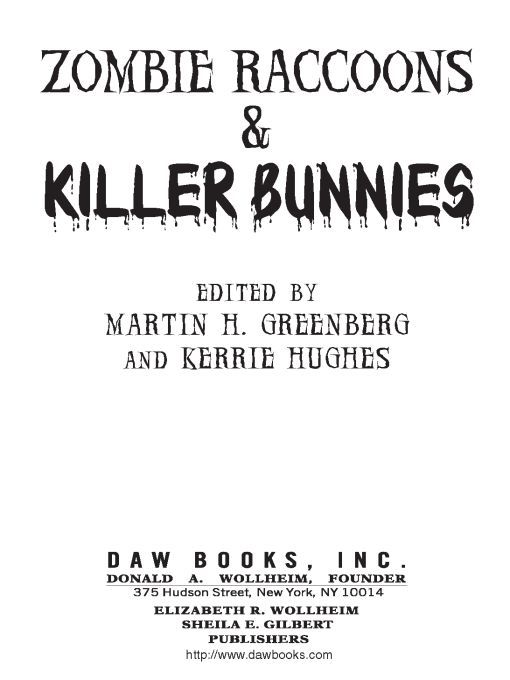 Table of Contents
Title Page
Copyright Page
Acknowledgements
Introduction
DEATH MASK
BUNRABS
FOR LIZZIE
FAITH IN OUR FATHERS
BONE WHISPERS
WATCHING
THE THINGS THAT CRAWL
THE WHITE BULL OF TARA
DEAD POETS
SUPER SQUIRREL TO THE RESCUE
HER BLACK MOOD
NINJA RATS ON HARLEYS
BATS IN THEBAYOU
TWILIGHT ANIMALS
THE RIDGES
ABOUT THE EDITORS
“You have offended, fat one. Now you die.”
The rats all pulled daggers.
Er. I blinked up at him, confused. What about threats, rantings, that kind of thing? I mean, really . . .
“She dies, you die.”
We all looked to see Wan standing on the seat of the car, backlit by the dome light of the minivan. Wisps of fog were gathered around his feet. He had his sword out and pointed at the ninjas. “Move away from her if you value your lives.”
It would have been very impressive had he been more than a few inches tall.
The rats chuckled, and even I smiled. Wan looked so earnest, standing there with his sword in his hand.
“She dies,” the possum laughed. “And then we beat the information out of you, traitor.”
Okay, not so funny now.
I leaped up, dodged one of the rats and hit the possum right on the snoot. Impressed?
The only problem is it didn’t happen that way. My middle-aged fat body wouldn’t leap up for nothing. So I did the best I could. I kicked one of the rats right on the shins. Smartly.
He dropped the knife and clutched his leg. Some ninja.
All eyes were focused back on me. “Kill her,” the possum snarled.
—From “Ninja Rats on Harleys”
by Elizabeth A. Vaughn
Also Available from DAW Books:
Swordplay, edited by Denise Little
Swords—at one time they were the quintessential weapons, and even today there are true sword masters practicing their craft around the world. Certainly, swords are essential tools of the trade in fantasy novels. Magical or legendary blades, workaday weapons, deadly daggers, rapiers, cutlasses, broadswords, and samurai swords all can be found carried by the heroes and villains, soldiers and assassins who people the seventeen original tales to be found in
Swordplay.
From a dwarf-crafted blade meant to slay a dragon to a cursed sword that once belonged to D’Artagnan, from Arthur’s legendary Excalibur to the Sword of Solomon, from a sword bespelled to crave blood to cold steel that magicks its wielder into a video game, here are imaginative stories that cut right to the heart of fantasy adventure. With stories by Kristine Kathryn Rusch, Mike Moscoe, Nina Kiriki Hoffman, Peter Orullian, Laura Resnick, and Janna Silverstein.
Terribly Twisted Tales
,
edited by Jean Rabe and Martin H. Greenberg
Fairy tales are among the earliest fantasies we are exposed to when we are young and impressionable children. What more fun could a fantasy writer have than to take up the challenge of drawing upon this rich material and transforming it into something new? These eighteen stories by Dennis McKiernan, Mickey Zucker Reichert, Michael Stackpole, Jim Hines, and others do just that. From the adventure of the witch in the gingerbread house and her close encounter with the oven . . . to Golda Lockes, who has a very special arrangement with those well-known bears . . . to a murderous attack with a glass slipper . . . to a wolf detective who sets out to solve “Grandma’s” murder, here are highly inventive stories that will give you an entirely new perspective on those classic tales.
Gamer Fantastic, edited by Martin H. Greenberg and Kerrie Hughes
Whether you spend your evenings enmeshed in computer games, or gather with your friends for war games every weekend, or faithfully attend gaming conventions year after year—or you just enjoy reading stories with three-dimensional settings and characters facing imaginative challenges, you’ll find what you are looking for in these thirteen tales created by veterans of the fantasy realms such as Chris Pierson, Donald J. Bingle, Jim C. Hines, Bill Fawcett, S.L. Farrell, Brian M. Thomsen, Jean Rabe, and Kristine Kathryn Rusch. And as an added bonus, there is a special introduction by Margaret Weis and a tribute to Gary Gygax by Ed Greenwood. So arm yourself for a fun-filled time as you join the ranks with this brand-new anthology. 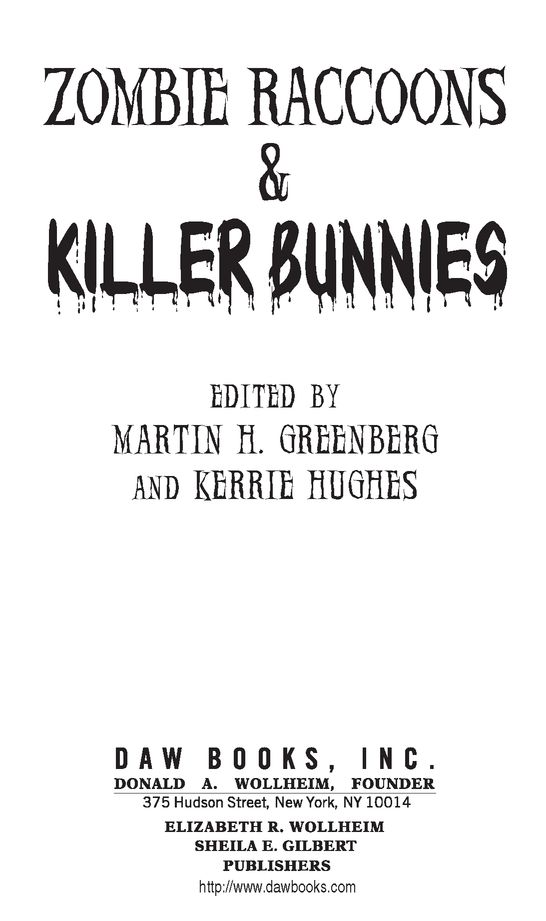 Copyright © 2009 by Tekno Books and Kerrie Hughes
All Rights Reserved
DAW Book Collectors No. 1491.
DAW Books is distributed by Penguin Group (USA).
All characters and events in this book are fictitious.
All resemblance to persons living or dead is coincidental.
The scanning, uploading and distribution of this book via the Internet or any other means without the permission of the publisher is illegal, and punishable by law. Please purchase only authorized electronic editions, and do not participate in or encourage the electronic piracy of copyrighted materials. Your support of the author’s rights is appreciated.
eISBN : 978-1-101-14532-6
First Printing, October 2009

ACKNOWLEDGMENTS
Introduction copyright © 2009 by Kerrie Hughes
“Death Mask,” copyright © 2009 by Jody Lynn Nye
“BunRabs,” copyright © 2009 by Donald J. Bingle
“for lizzie,” copyright © 2009 by Anton Strout
“Faith in Our Fathers,” copyright © 2009 by Alexander B. Potter
“Bone Whispers,” copyright © 2009 by Tim Waggoner
“Watching,” copyright © 2009 by Carrie Vaughn
“The Things That Crawl,” copyright © 2009 by Richard Lee Byers
“The White Bull of Tara,” copyright © 2009 by Fiona Patton
“Dead Poets,” copyright © 2009 by John A. Pitts
“Super Squirrel to the Rescue,” copyright © 2009 by P.R. Frost
“Her Black Mood,” copyright © 2009 by Brenda Cooper
“Ninja Rats on Harleys,” copyright © 2009 by Elizabeth A. Vaughan
“Bats in Thebayou,” copyright © 2009 by Steven H Silver
“Twilight Animals,” copyright © 2009 by Nina Kiriki Hoffman
“The Ridges,” copyright © 2009 by Larry D. Sweazy
INTRODUCTION
I
used to live in Kansas, where blue laws at drive-in movies kept scenes of horror or sex from being shown on the outdoor screen. Instead, the moviegoers would hear the action but not see it, while children in neighboring houses could not see or hear anything that might warp their little minds. I know because I was one of those nearby children desperately trying to see the movies from my bedroom window a few blocks away.
Finally, at age 15, I was old enough to go to an R-rated, cut-apart horror film and saw a classic called
Dawn of the Dead
. Too much was removed for me to see the gory details, but the sounds of zombies munching on their screaming victims made me retch. I had to go home. I wasn’t that scared when I saw
Jaws
in the theater, although I’m still not going to swim in the ocean. Or lakes for that matter—have you seen what happens to camp counselors? But I digress.
I’m still more terrified of zombies than I am of vampires, werewolves, and demons. I’m not scared of witches and ghosts because I know quite a few witches and have
met at least two ghosts. Quite frankly, I am more afraid of psychopaths and corporate suits.
At any rate, for the last dozen years or so I’ve been making a very bad joke about zombie raccoons and killer bunnies being the cause of every unknown noise in the dark and my trash being knocked over and strewn around. It’s probably neighborhood cats and dogs, but I’m not going outside to find out. I also must admit that the killer bunny thing is a Monty Python affectation, and I recently went to see
Spamalot
hoping to see some good old fashioned killer rabbit carnage. The show was good, but the bunny did not get nearly the stage time it deserved.
When soliciting authors for this anthology, I found that most of my invitees were quite fond of raccoons and would feed them on a regular basis. Jody Lynn Nye actually lets them eat inside her house. When I lived in a second-story apartment, a mother raccoon and her babies would climb up nightly to get a free dinner while my cat hissed and yowled from behind the safety of the patio door. My son and my cat made it very clear that wild animals should not be fed by humans, as it makes the population too large for the environment. I say better to feed the raccoons than be fed on by them!
As to the stories in this anthology . . .
I’d like to point out that Beth Vaughn has given me a story that is the second part of one that appears originally in
Furry Fantastic
. I’m hoping she will turn it into a book soon. Brenda Cooper has a story set in the same world as her stories in
Maiden Matron Crone, Children of Magic, Fellowship Fantastic,
and
The Dimension Next Door.
Alexander Potter also has a reoccurring character that appears in the same four anthologies. Clearly I am a fan of these folks.
The resulting anthology is an interesting mix of fairy tale, horror, and humor, and I would like to thank each and every author for their contributions and DAW for creating the opportunity for all of us to create these stories.
So sit back and enjoy the critters, but for the love of cats, don’t go outside at night when you hear your trash cans fall over—it might just be those zombie raccoons!
Kerrie Hughes
DEATH MASK
By Jody Lynn Nye
Jody Lynn Nye lists her main career activity as “spoiling cats.” She lives northwest of Chicago with two of the above and her husband, author and packager Bill Fawcett. She has published more than thirty-five books, including six contemporary fantasies, four SF novels, four novels in collaboration with Anne McCaffrey, including
The Ship Who Won
; edited a humorous anthology about mothers,
Don’t Forget Your Spacesuit, Dear!
;
and written over a hundred short stories
.
Her latest books are
An Unexpected Apprentice
, and
Myth-Chief
, cowritten with Robert Asprin. And, yes, she does believe in magic.

Slocum and the Long Ride by Jake Logan
A Single Shard by Linda Sue Park
The Pentagram Child: Part 1 (Afterlife Saga Book 5) by Stephanie Hudson
Splitting Up and Park Hyatt Hotel by Galatée de Chaussy
The Outpost by Mike Resnick
Masked Love (A Christmas Regency Novella) by Zoltack, Nicole
The Desperate Deputy of Cougar Hill by Louis Trimble
Jaguar Secrets by Khloe Wren
The City of Shadows by Michael Russell
A Game of Proof by Tim Vicary
Our partner