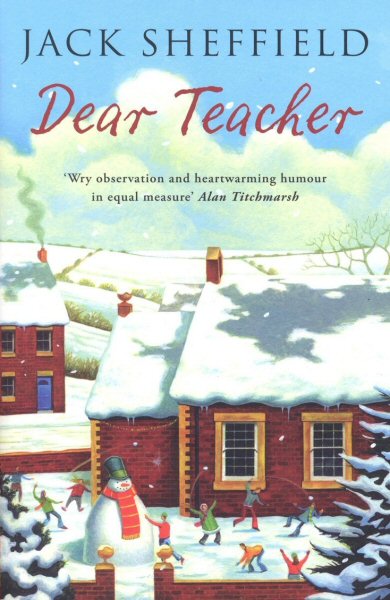 It’s 1979:
Dallas
is enthralling the nation on TV, Mrs Thatcher has just become prime minister, Abba is top of the pops, and in the small Yorkshire village of Ragley-on-the-Forest, Jack Sheffield returns for his third year as headmaster of the village school.

Jack and his staff struggle to keep a semblance of normality throughout the turbulence of the school terms, as once again the official School Log fails to record what is really going on beneath the seemingly quiet routine. Ruby the caretaker discovers her Prince Charming; Vera the school secretary gets to meet her hero, Nicholas Parsons; and Jack, to his astonishment, finds himself having to stand in as a curiously skinny Father Christmas.

Jack also finds himself, at last, having to choose between the vivacious sisters Beth and Laura Henderson…

Chapter One: Beatrix Potter and the Pest Controller

Chapter Two: The Gateway to Harmony

Chapter Six: Sorry Seems to be the Hardest Word

Chapter Seven: The Thinnest Father Christmas in the World

Chapter Twelve: Look Before You Leap

Chapter Fifteen: The Day of the Daffodils

Chapter Eighteen: The Mystery of Life

For my brother Roy

I am deeply indebted to my ever-patient and hugely supportive editor, Linda Evans; the dynamic publicity team of Stina Smemo and Lynsey Dalladay and all at Transworld for their support, particularly Katie Espiner, Nick Robinson, Sophie Holmes and fellow ‘Old Roundhegian’ Martin Myers. Also, thanks go to my hardworking agent, Philip Patterson of Marjacq Scripts, for his good humour and vast knowledge of world trivia.

Ragley School was still and silent on this late-summer day. A shaft of early-morning amber sunlight streamed in through the high arched Victorian windows and lit up my old oak headmaster’s desk.

Propped against a brass paperweight was a photograph of three people, captured at a moment in time. I was in the centre, smiling at the camera, the July sunshine glinting on my Buddy Holly spectacles. My arms were wrapped round the slim waists of two beautiful women.

To my left, Laura Henderson was glancing up at me with soft green eyes. She was wearing a forget-me-not-blue dress and her long brown hair hung free over her suntanned shoulders. To my right was Beth Henderson and, once again, I felt that familiar ache in my heart. There was a time I had hoped I might spend the rest of
my
life with her but it appeared it was not to be.

I tilted the photograph towards the light and examined it more closely. Beth looked stunning in a cream suit and matching wide-brimmed hat. Her honey-blonde hair caressed her high cheekbones and I sighed at the memory of the day. I noticed she was staring curiously at her sister.

On the back of the photograph was a message that read: ‘
Dear Jack, a reminder of a lovely day. See you on 3 September, Jo and Dan
.’

Jo Hunter, the class teacher of the older infant children, had married our local police constable at the end of the summer term. After the wedding everyone had gathered in the village hall for a party that gradually broke up when the happy couple had driven off into the sunset.

Once more I stared at the photograph and remembered that day six weeks ago. Laura had invited me back to her flat in York. ‘I’m having a relaxing night in, tonight, Jack. I was hoping you might like to join me for a meal,’ she said before driving away.

Minutes later, to my surprise, Beth made the same offer. ‘It would be good to see you tonight, if you want to come back to Morton,’ she said. ‘We’ve got some catching-up to do.’ Then she stretched up and kissed me gently on the lips. It was so unexpected. Earlier in the year, Beth had made it clear that she didn’t want any permanent commitment.

Her words were still etched in my mind.

So, that evening, with hope in my heart, I had driven to
Beth’s
house in Morton village. As I opened my car door, she walked down the path to meet me. Her reception was cautious. ‘I’ve just had a call from my little sister,’ she said, ‘and she says she’s expecting you.’ Beth looked sad. Then she stretched up and kissed me lightly on the cheek. When she walked away she didn’t look back.

Feeling confused, I drove to York, where Laura had prepared a lovely meal and, though I tried to be attentive, my thoughts were elsewhere. Weeks passed and, as the summer holiday progressed, I saw more of Laura and less of Beth. Eventually, August came to an end and I turned my attention back to my work and the new school year ahead.

It was Saturday, 1 September 1979. My third year as headmaster of Ragley-on-the-Forest Church of England Primary School in North Yorkshire was about to begin. I unlocked the bottom drawer of my desk and slid the photograph inside for safekeeping. Then I took out the large, leather-bound school logbook and opened it to the next clean page. I filled my fountain pen with black Quink ink, wrote the date and stared at the empty page. The record of another school year was about to begin.

Two years ago, the retiring headmaster, John Pruett, had told me how to fill in the official school logbook. ‘Just keep it simple,’ he said. ‘Whatever you do, don’t say what really happens, because no one will believe you!’

So the real stories were written in my ‘Alternative School Logbook’. And this is it!

Beatrix Potter and the Pest Controller

86 children were registered on roll on the first day of the school year. Following a Health & Safety directive from County Hall
, Star Wars
light sabres were banned. The Pest Control Officer visited school
.

It occurred to me that the beginning of another school year just wouldn’t be the same without the pit-bull presence of our least favourite parent, Mrs Winifred Brown.

‘I haven’t seen it, Mrs Brown; what does it look like?’

‘It’s three foot long an’ it glows blue in t’dark … at least, it would if my Eddie got off ’is backside an’ put t’batt’ries in.’

I removed my Buddy Holly spectacles and began to polish them to give me thinking time. ‘And when did it go missing?’

‘ ’E brought it t’school jus’ afore all you teachers went off on y’cushy six-week ’oliday.’ Next to her, five-year-old Damian lifted his sinister Darth Vader mask, dispelled all thoughts of Empire domination and proceeded to pick his nose.

‘Y’better do that ’cause it cos’ me a fortune.’

With that I retreated quickly and shut the office door.

‘An’ ah’ll be back at quarter t’three,’ she shouted. ‘Our Damian needs some shoes from t’Co-Op,’ and she stormed out.

It was just after 8.30 a.m. on Tuesday, 4 September 1979 and my third year as headmaster of Ragley Church of England Primary School in North Yorkshire had begun.

Anne Grainger, the deputy headmistress, walked into the office from the staff-room clutching a copy of Beatrix Potter’s
The Tale of Mrs Tittlemouse
.

‘May the force be with you, Jack,’ said Anne with a grin.

Anne, a tall, slim brunette in her mid-forties, was always a reassuring presence. Her patience was legendary and she certainly needed it as our Reception Class teacher.

A distant memory of sitting next to Beth Henderson in the Odeon cinema in York, watching
Star Wars IV, A New Hope
, flickered across my mind. I recalled that Beth had asked me why the film had begun at episode IV but all I could think about was how lucky I was to be sitting next to such a beautiful woman.

Anne shook her head in mock dismay and grabbed my arm. ‘Come on,’ she said, ‘Vera’s giving out the new registers,’ and we walked out of the office, past the little cloakroom area and into the staff-room.

Miss Vera Evans, our fifty-seven-year-old secretary, looked imperiously over her steel-rimmed spectacles. ‘May I remind you all to mark your pupils present in black and the ones who are absent in red.’ Then she handed out the new attendance registers.

‘Your word is our command, Vera,’ said Sally Pringle.

A tall, freckle-faced thirty-eight-year-old with bright ginger hair, Sally taught the younger junior children and her lively dress sense was a world away from Vera’s immaculate Marks & Spencer’s pin-striped business suit. Vera frowned and glanced at Sally, who was picking absent-mindedly at the hand-stitching on the pockets of her voluminous tie-dyed tangerine dress. She never fully understood Sally’s humour.

Jo was a diminutive, athletic twenty-four-year-old with long jet-black hair who taught the older infants. She looked thoughtfully at her name on the front cover of her class register, written by Vera in neat copperplate
handwriting
. After being Jo Maddison all her life, her new married name still intrigued her.

‘And you will recall,’ continued Vera, ‘that last year County Hall banned skateboards in school … Well, this year they’ve banned something called a “light sabre”, which I understand is a toy that resembles a broomstick.’

‘Quite right, Vera,’ I said, recalling my conversation with Mrs Brown.

Anne gave me a knowing look, picked up her new register and hurried off to check her Lost Property box. Jo gathered together a collection of posters on ‘The Seashore’ and set off back to her classroom, where she stood on a chair to write the date on the top of her chalkboard. Meanwhile Sally put her new register in her hippy, open-weave shoulder bag, selected a garibaldi from the biscuit tin and walked out of the staff-room – but, noticeably, without her usual enthusiasm.

Vera smoothed her beautifully permed greying hair and passed me a cup of milky coffee. ‘Here’s to another good year, Mr Sheffield.’

I smiled as Vera continued to call me ‘Mr Sheffield’. She had always insisted this was the proper manner to address the headmaster.

‘Thank you, Vera.’ I looked at my watch. ‘Almost time for the bell.’ With a spring in my step I pushed open the giant oak entrance door and walked down the worn steps under the archway of Yorkshire stone. In the playground, a group of mothers clung on to their new starters, while
the
other children removed the embarrassment of their new school shoes by scraping them against the Victorian school wall, discussed the merits of Chopper bikes and swapped magazine photos of David Cassidy and Donny Osmond.