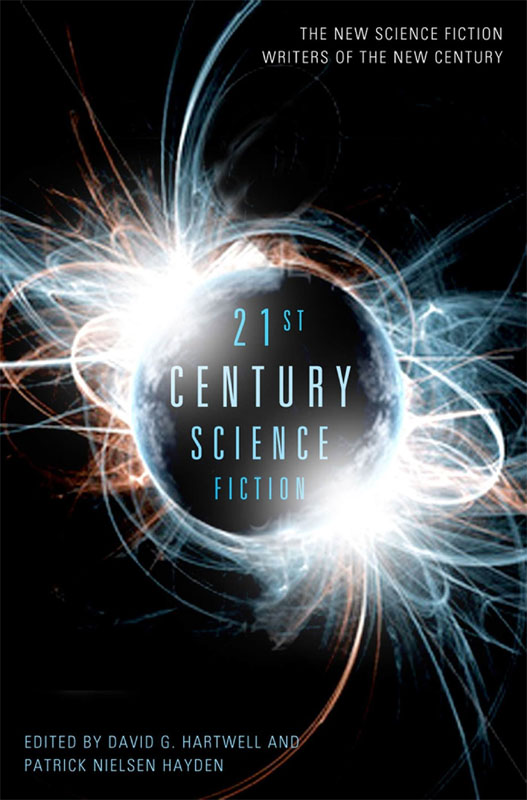 David G. Hartwell
is widely acclaimed as the most influential SF editor of the age, and lives in Pleasantville, New York.
Patrick Nielsen Hayden
, called by the
Washington Post
‘one of the most literate and historically aware editors in science fiction’, lives in Brooklyn, New York. They have both won the World Fantasy Award and multiple Hugo Awards for their editorial work.

First published in the US by Tor®, a registered trademark of Tom Doherty Associates, LLC., 2013

The right of David G. Hartwell and Patrick Nielsen Hayden to be identified as the authors of this work has been asserted by them in accordance with the Copyright, Designs and Patents Act 1988

“The Education of Junior Number 12” copyright © 2011 by Madeline Ashby

“The Gambler” copyright © 2008 by Paolo Bacigalupi

“The Waters of Meribah” copyright © 2003 by Tony Ballantyne

“One of Our Bastards Is Missing” copyright © 2009 by Paul Cornell

“The Prophet of Flores” copyright © 2007 by Ted Kosmatka

“To Hie from Far Cilenia” copyright © 2010 by Karl Schroeder

“How to Become a Mars Overlord” copyright © 2010 by Catherynne M. Valente

THE TALE OF THE
WICKED
•
John Scalzi

THE WATERS OF MERIBAH
•
Tony Ballantyne

ONE OF OUR BASTARDS IS MISSING
•
Paul Cornell

THE ALGORITHMS FOR LOVE
•
Ken Liu

THE PROPHET OF FLORES
•
Ted Kosmatka

HOW TO BECOME A MARS OVERLORD
•
Catherynne M. Valente

ESCAPE TO OTHER WORLDS WITH SCIENCE FICTION
•
Jo Walton

You hold in your hands an anthology of stories by what we believe are some of the best science fiction writers that came to prominence since the twentieth century changed into the twenty-first. That phrase “came to prominence” explains our approach. Many writers publish their first work long before they come to general attention. William Gibson exploded into the consciousness of science fiction, and then the world, with
Neuromancer
in 1984, but he had been publishing short fiction for years before that. Likewise, there are writers in this volume whose first stories appeared as early as the 1980s, but nobody in this book came to wide notice before 2000.

The idea of an anthology showcasing the SF voices of the new century seemed like a natural project for the two of us. Our tastes are not identical, but we can fairly well agree on good writers and good stories. And we are both students of the history of SF without holding all the same opinions about it. Neither of us is especially interested in being genre policemen, dictating what is and isn’t proper SF. And yet, both of us emerge from the core SF audience of the twentieth century—the SF subculture, professional and fannish, that emerged from the earnest and urgent desire to defend and encourage quality SF in the face of a dominant culture that seemed to hold it in contempt. Decades later, many of the battles of those days have been won. Others have become irrelevant. One of the interesting things about the stories presented here is that they were written in a world in which SF, far from being marginal, is a firmly established part of the cultural landscape.

This took a long time, longer than we wanted. We had hoped to finish the book in 2010 and publish it in 2011 or 2012. But perhaps the wait has made it a better book, because we had more time to think it through. We are even more confident about our choices than we were three years ago. And we are reasonably certain that you will find much to enjoy, engage with, and argue over in the pages that follow.

V
ANDANA
S
INGH
Born and raised in New Delhi, Vandana Singh now lives near Boston, where she teaches physics at a small state college. Her SF stories have been appearing in print since 2002. She has written of herself that “being a card-carrying alien writing science fiction is an interesting experience; my distance from my native shores necessarily affects what and how I write.”

“Infinities” first appeared in her collection
The Woman Who Thought She Was a Planet
, published in India in 2008. Many of her stories are set in India, or in futures influenced by the traditional figures of Indian literature. She says, “Physics is a way of viewing the world, and it is one of my most important lenses. One of the most exciting things about science is that it reveals the subtext of the physical world. In other words, surface reality isn’t all there is; the world is full of hidden stories, connections, patterns, and the scientific as well as the literary and psychological aspects of this multi-textured reality are, to me, fascinating.” In this story about a man who loves mathematics, Singh manages to convey something quite rare, in our genre or out of it—an authentic sense of what paradigm-shattering mathematical insight feels like from the inside. She does so without flinching from the fact that, on the other side of eureka, the world remains the world.

An equation means nothing to me unless it expresses a thought of God
.

Learning to Love by Catherine Harper
Immortal Devices by Kailin Gow
The Last Dance by Kiki Hamilton
Next To You by Sandra Antonelli
The Nephilim by Greg Curtis
The Lereni Trade by Melanie Nilles
Color Me Crazy by Carol Pavliska
The Eden Hunter by Skip Horack
Beauty by Sarah Pinborough
Dear Lumpy by Mortimer, Louise
Our partner