4 A Plague of Angels: A Sir Robert Carey Mystery 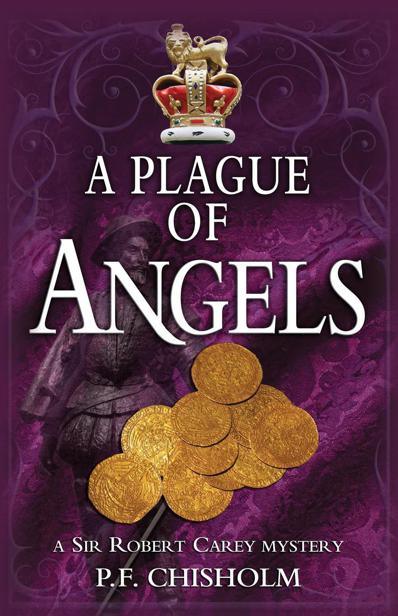 To Kay, with thanks

Some of the diabolical liberties I have taken with two famous playwrights were inspired by Samuel Schoenbaum’s
William Shakespeare
, A. L. Rowse’s
Shakespeare’s Dark Lady
and Charles Nicholl’s
The Reckoning
. The Topographical Society’s
A to Z of Elizabethan London
was indispensable as was my father’s enthusiastic willingness to delve through his library in search of obscure nuggets of information.

I am something of a connoisseur of opening lines, and the first line of P.F Chisholm’s
A Plague of Angels
is right up there with the best:

You could always tell when you were near a town from the bodies hanging on the gibbets by the main road, thought Sergeant Dodd.

Past the first line, Chisholm’s Sir Robert Carey novels are the sort of books that cause one to rush out of the house and leave the supper burning for fear of finishing one after the bookstore has closed and the others are out of reach. And the main reason for this addictive readability is the way in which complete matter-of-factness meets historical picturesqueness, thus resulting in a thoroughly convincing illusion of reality.

Wildly entertaining reality, to be sure, but reality nonetheless.

Historical events are all very well—and P.F. Chisholm obviously has her setting by the short hairs—but the reality of a
story
rests on the personalities of the characters.

One historical author of my acquaintance describes something she calls “historical serendipity.” This is the condition of knowing one’s period so well and so intimately that when one reaches a point in the story where it’s necessary to...(gasp) make something
up
, one’s fictional choices are not only historically plausible—but very often turn out to be the
ex post facto
honest-to-goodness truth, as well.

I’d say that Chisholm operates with great aplomb in this rarefied state of serendipity; while she makes no bones that these are novels, her conscientious—and thoroughly unconscionable—handling of historical persons, such as William Shakespeare, keep the reader alternately giggling and drop-jawed, but never incredulous. No one
knows
that William Shakespeare did such things; but no one can prove he didn’t, either, and Chisholm’s version is so perfectly in tune with time and attitude that we’re more than willing to believe it.

She pays the debt of accuracy that any historical novelist owes to the honor of the dead—and yet where history leaves lacunae, her imagination leaps gleefully in to fill the gap.

In Chisholm’s fiction, the historical characters—including Sir Robert Carey himself—are as believable as the fictional ones; this is a feat in a genre where “real” characters are sometimes so constrained by documentation and “what’s known” as to come off as paradoxically wooden, by contrast with the purely fictional—and thus fancy-free—characters, who can cavort and speak as they please.

And that’s the chief trick, of course, in creating lively, vivid characters; no trick at all, but only allowing the characters to speak for themselves. Chisholm does this brilliantly, and I can do no less:

“Don’t kill anybody, Sergeant,” Carey said. “Even if there’s a fight.”

“You’ve no idea what a bloody nuisance it is to fix juries in London,” Carey snapped. “So don’t get yourself hanged.”

Sergeant Henry Dodd, suspicious and canny Land Sergeant of Gilsland, a force to be reckoned with on his native Border, and not entirely helpless even in the strange stews of London:

“Ay tell you what,” he said conversationally, and trying hard to talk as much like Barnabus as he could so they would understand him. “Since ye’re all a bunch o’ catamites wi’ nae bollocks at all, I’ll take three o’ye at once so I dinnae outnumber ye.”

Henry Carey, Lord Hunsdon, illegitimate half-brother to the Queen, and patriarch to a brood of reckless sons:

“ROBIN!” bellowed Hunsdon, nose to nose with Carey. “Do I have to hit you to calm you down?”

And Barnabas Cooke, so much more effective as a pickpocket than as a valet, who leads our heroes through the myriad dangers of the urban jungle:

Dodd gobbled. He heard himself do it, but couldn’t stop.
Twenty-five shillings
, for a
hat
? “Barnabus…” he growled and Barnabus took his elbow and whisked him round the side of the stall.

“Look, Sergeant, it sounds a lot, but it’ll be worf it, believe me. There’s nuffing ladies like better than ‘ats and she’d never ever get one this good nor this fashionable anywhere norf of York.”

To say nothing of the articulate and picturesque characters who people Chisholm’s London:

“I know a lot of poets. Good company.”

Not only dialogue but narrative is carried on the giddy whirls of language like spun-sugar; so elegant and delightful that you want to read each line over several times for the sheer pleasure of seeing it again.

This gift of language, combined with that masterly appreciation for the small pleasures and inconveniences of life—

“Och,” said Dodd, enjoying himself. “Is the light too bright for ye, sir. Will I shut the shutters for ye?” Perhaps he did bang them a bit hard but it was such fun to watch Carey wince. That’ll learn ye to be happy in the morning, Dodd thought savagely.

—gives the book a feeling of complete reality, no matter whether the setting is a plague-stricken neighborhood, a Cheapside jeweler’s, or the beggar’s ward of the Fleet prison.

From opening line to bottom line, the felicity of the language leads us through a neatly dove-tailed plot that ranges from high comedy to genuine pathos, but never loses its sense of engagement—because it’s dealing with characters who are Real People.

And the
real
bottom line is that while I adore Sir Robert Carey
and
his father, I am just hopelessly in love with Sergeant Dodd.

You could always tell when you were near a town from the bodies hanging on the gibbets by the main road, thought Sergeant Dodd. London was no different from anywhere else they had passed on the interminable way south. As their horses toiled up the long hill from Golders Farm, Dodd could just glimpse a robber’s corpse dangling from a big elm tree, up on the brow. Of course Sir Robert Carey had told him how close they were to London when they turned off the Great North Road and passed through the village of Hendon, but they had been delayed by Carey’s horse throwing a shoe. The afternoon crowds of people were gone now so that the dusty rutted road was quite empty. It could have been anywhere.

A bit of knowledge gleaned from Carey’s manservant floated to the front of his mind.

‘Ay,’ he said with interest, and turned in the saddle to speak to Barnabus himself who trailed lumpenly along behind them on a sulky looking horse. ‘Would that be Tyburn Tree up ahead there?’

Barnabus was frowning with concentration as he tried to get his mount to move faster up the hill.

‘Nah, mate,’ he puffed, kicking viciously at the horse’s flanks. ‘Tyburn’s off to the west, where the Edgeware Road meets the Oxford Road, and it’s a lot fancier than that. That’s only the Hampstead Hanging Elm.’

The road was curving round into a deep cutting with scrubby heathland trees growing on the banks. Ahead, the Courtier’s ugly and obstinate replacement horse was balking at something again, probably the smell of rot from the corpse. Carey had glanced without interest at the Elm with its judicial fruit. The horse neighed, tossed his head and skittered sideways.

‘God damn it,’ Carey snarled to the horse. ‘You flyblown lump of dogsmeat, get over!’ He brought his whip down on the animal’s flank and the horse crow-hopped and tried to turn to run back down the hill to its home in Golders Green.

Dodd wasn’t liking the look of the place either. You couldn’t see past the curve of the road and those high banks on both sides were perfect siting for an ambush.

He tried to urge his own horse up to a canter to bring him level with Carey, but the mare had her head up too, and her nostrils flared. Forelegs straight and the hairs of her mane up, she refused to pick up the pace. Dodd frowned.

‘Whit’s ahead of us, sir?’ he called to Carey whose nag was slowly turning round in circles and shaking his head.

‘The Cut, then Hampstead horse pond,’ said the Courtier and whacked the animal again. ‘Will you get on, blast you…!’ he roared at it.

Drawing his sword, Dodd slid from the saddle, took the mare’s bridle and led her forward at a run, then dodged behind and hit her on the rump with the flat of the sword. The mare reared and bolted past the Courtier and young Simon Barnet on his pony.

As she galloped up the road through the Cut, whinnying and shaking her head, Dodd heard the unmistakeable
whip-chunk!
of a crossbow being fired.

‘Och,’ he said to himself as he instantly changed direction and sprinted softly up the narrow path he had spotted on the right hand side of the Cut. ‘Ah might have guessed.’

The bank reared higher on the right of the road, soft sandy earth held together by tree roots and bushes. Just below him, overlooking the narrowest part, he saw a man hunched in hiding, a bolt ready in his crossbow as he squinted down the sight ready for them to pass by.

Dodd had been storing up an awful lot of rage on the journey south from Carlisle. He gave an inarticulate roar at the sight, hopped like a goat down the high crumbling earthbank and cut down on the man with his sword.

Crash Gordon and the Mysteries of Kingsburg by Derek Swannson
Speaking Truth to Power by Anita Hill
T*Witches: Dead Wrong by Randi Reisfeld, H.B. Gilmour
Zoo Time by Howard Jacobson
Society Weddings by Sharon Kendrick, Kate Walker
The Financial Lives of the Poets by Jess Walter
A Lady Cyclist's Guide to Kashgar by Suzanne Joinson
Knight of Pentacles (Knights of the Tarot Book 3) by Nina Mason
High Noon by Nora Roberts
Wars of the Roses: Bloodline: Book 3 (The Wars of the Roses) by Conn Iggulden
Our partner