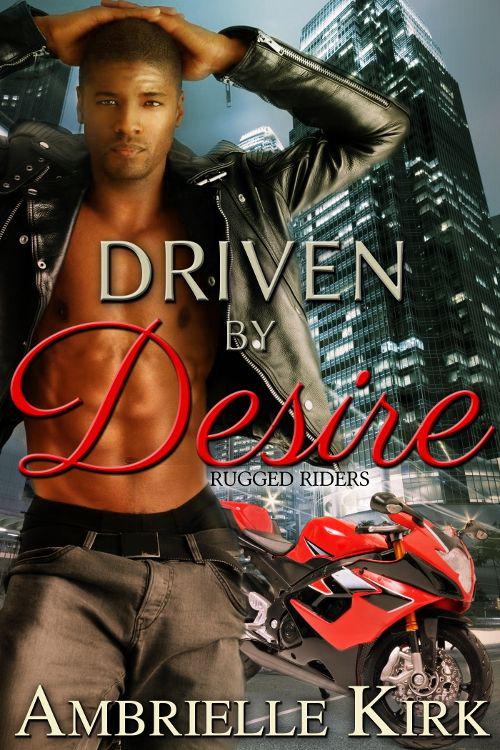 Tanya will need more than just a helmet when she’s driven by desire.

Tanya gets in way over her head when she decides that the cure to her lovesickness includes playing the field to her advantage. She vows to enjoy one reckless night with a man to help rid her mind of the ex who trashed her heart. There is one who fits the bill…

Marcus is the complete opposite of Tanya’s ex. As a member of Rugged Riders, a notorious biker club, he and his brothers are known for their street-savvy swagger and their wicked ways with women. When they first meet up, Tanya and Marcus attain a mutual understanding, and she knows just what to expect from him—a thrill ride when she needs it and nothing more. When Tanya finds out that Marcus has more in common with her ex than she thought, she sets up even more barriers to guard her heart.

Not only is Marcus a beast in bed and a thrill seeker behind his bike, he dominates in the boardroom as CEO of multi-million dollar company, Svelte Technologies. He’s no stranger when it comes to the game of pursuing what he wants. And Marcus wants Tanya for real and in his life exclusively.

“So…what do you propose we do about this attraction?”

“I’ll call you tonight and we can discuss our next date.”

She grinned. “Are you asking me out?”

“Are you going to accept?” he teased.

“We can discuss tonight.”
She gathered up her stuff, tucking her cell phone into her purse. “I’m going to be late for class if I don’t leave now.”

Marcus wrapped up his half-eaten sandwich and got up with her. “I’ll walk you to your car.”

“That didn’t sound like a question, but you may.”

“Th
at sexy mouth of yours has a crafty reply to everything I say.”

Tanya had parked in the garage directly across the street, so it didn’t take long to reach her little white Corvette.

“Nice,” he said, as they stood next to the driver side door. “You like fast cars, then?”

“Yeah, but n
ot as exciting as your motorcycle, I’m sure.”

“I’ll have to take you on a ride and you can see for yourself.”

His gaze fell on her mouth, and in that moment her knees became weak as the tip of his tongue slid across the seam of his lips.

He kissed her, taking her mouth passionately and demanding entry. He tasted just as good as she remembered. The freshness of his aftershave and spiciness of his cologne surrounded her, and in that moment she could think of no place she’d rather be than in his arms. He teased her with his lips over and over again, kissing her as though it were the first and last time he would see her. His gentle touch at the back of her neck felt blissful and for a moment she forgot she was in the middle of a parking garage.

Tanya pulled away from the kiss, placing her palm against his chest followed by her forehead. It took her some time to catch her breath. He, too, breathed hot and heavy against the top of her head.

“Yes.” He nodded. “You won’t stand me up again and I should
expect my call to be answered tonight?” This time, his inquiry did come out like a question and not a mandate.

“You should expect this,” she confirmed, then picked up his royal blue tie, and straightened it so that it was perfectly aligned on his chest.
She couldn’t help but think back to how they first met back in Ocho Rios. “Blue. The color exudes power, loyalty, and authority. Good choice.”

“And the man wearing it? What does he exude?”

“I haven’t quite pinpointed it yet, but whatever it is…it works for me.”

All rights reserved. No part of this publication may be reproduced, stored in a retrieval system, or transmitted in any form or by any means, electronic, mechanical, recording or otherwise, without the prior written permission of the author.

This is a work of fiction. The characters, places, incidents, and dialogues in this book are of the author’s imagination and are not to be construed as real. Any resemblance to actual events or person, living or dead, is completely coincidental.

“This is definitely the one.”

Tanya Carter ran her hands down the smooth fabric of the dress, turning from side to side as she viewed her silhouette in the three-paneled mirror. The light above the dressing room stall beamed down on her making her feel like a star for the moment.

The blue and black strapless mini dress was definitely eye-catching. The A-line style fit her flawlessly, the beaded belt cinched her waistline, and the flared bottom flattered her figure.

Vanessa, a friend from undergrad school, was getting married and despite Tanya’s boyfriend-less situation she didn’t want to renege on her promise to be there. Most of the guests would be accompanied by companions and significant others while she would be alone. Tanya had been jilted by her boyfriend—
ex-boyfriend
—who couldn’t make up his mind. But all that was behind her now.

At the very last minute, Tanya had
decided that she didn’t care what others thought of her flying out here all alone. Since her breakup with Justin was fresh, not many people knew they weren’t on speaking terms. He’d left her for bigger and better things and it was time she did the same. There would be no more slouching around endlessly trying to figure out what went wrong in their relationship. She had done enough of that.

Having made her decision, she peeled out of the cocktail dress and slipped it back on the hanger. She didn’t even give the other selections still hanging in the dressing room a backward glance as she made her way out and back into the main part of the small retail shop. Lifting her wristwatch, she noted the time and made a beeline for the cash register. She’d told the cab driver that she would only be in here for an hour.
That means she had less than fifteen minutes to check out and head out. Hailing down another cab on the sidewalk under the heat of the Jamaican sun wasn’t fun at all.

“Excuse me.” The deep male voice sent warm vibrations up her spine and seemed to caress her neck and fan out along her shoulders.

The sound of it was just so mesmerizing that Tanya couldn’t help but to halt her hurried pursuit and turn around.

The first thing she was his eyes. Hazel and deep set. Mysterious and dark. His skin was a golden brown color, almost like a pecan, but flawless
in tone. His lips were neither too big, nor too small and the corners were turned up in a slight grin. His jaw was hardened, squared and there was a hint of a five o clock shadow along his face. Her eyes dropped lower, but they were so close together that all she viewed was a strong neck and a glimpse of collarbone and muscles galore.

“Hi.” The words rushed from her at the same time she released the breath she’d been holding to a
ssess him.

“Hi.” His grin spread wider. “Would you mind helping me with something?” The sound of his voice was yet again low and tempting.

“I couldn’t decide which tie to get.” He held up three ties of various colors and patterns. “Can you offer some suggestion?”

Oh, now she got it. He had mistaken her for an employee. Based on his rather casual style of dress, it didn’t appear that he was a native here. He didn’t sport a Jamaican accent either. Although, she could have been wrong.

Tanya swallowed down the giddy feeling rising in her chest and allowed her hardened exterior to wash over her. “Does it look like I work here?”

His lips twitched with indifference. “No, it doesn’t.”

“Then I suggest you find someone who does.” She stepped back. “They can help you better than I can.”

Just before she turned around he caught her, wrapping gentle fingers around her forearm. The exhilarating smell of his cologne fanned under her nose again, reminding her of fresh ocean and summer breeze.

Tanya watched his lips as he spoke, forming the words carefully.

“I couldn’t decide which tie looked b
est,” he continued, and his gaze lingered on her mouth, swept from her face, down to her chest, and finally to the dress draped across her arm. “As I can see, you have fine taste and I thought you could lend your expertise in this.”

She bit into her bottom lip. More than enough of her wanted to help him. What was it about a drop-dead sexy man that had her swooning? One with the voice of a suave panty-dropper. She’d come to learn that they were fine to look at. Good for one thing…maybe a couple, but dangerous to date.

She glanced at the ties in his hand. Maybe if she just picked one, he’d leave her alone so that she could go about her business. Besides, she needed to get back to the hotel to tackle her unruly hair. The Jamaica humidity had messed up her style. What had once been straight and sleek hair was now becoming a fluff of curls. It was not exactly the way she planned to sport it at the wedding.

“The red one,” she said, eyeing the solid colored tie.

Was he serious?
Damn.
She thought only women worried about this type of stuff. “Red exudes strength and action. It’s energizing, as well,” she said, quickly.

He smiled and lifted a tie with a white and green checkered type pattern. “Why not this one?”

The last tie had diagonal stripes, alternating between black and silver. “It’s more conservative. Something you would want to wear to work or a job interview.”

“So, it’s a definite no to the checkered tie. Maybe for this black and silver. And a yes for the red one,” he said, illustrating with each tie.

They’d parted some and she was able to glimpse him completely now. He was most certainly striking in what he wore already. He needed no tie to look good. In fact, he could have worn the tacky checkered one and still looked hot. Instead, he wore a simple polo shirt and a pair of jeans with significant authority. Everyday American attire, but what made the clothes were the man wearing them.

He was more than several heads taller than her. About six feet four
, if her estimates were correct. Built, but not bulky with broad shoulders. His arms were taut, telling her that he spent considerable amounts of time in a gym or somewhere else working out.

Miri: A Paranormal Romance (Plenty of Shift Book 1) by Wilder, Carina
The Glass Bird Girl by Esme Kerr
The Crisscross Shadow by Franklin W. Dixon
Pulp Fiction | The Invisibility Affair by Thomas Stratton by Unknown
Children of the Fog by Cheryl Kaye Tardif
The Gate by Bob Mayer
The It Girl by Katy Birchall
Open by Ashley Fox
Catnapped! (A Matchmaker Mystery Book 3) by JB Lynn
Redheads by Jonathan Moore
Our partner