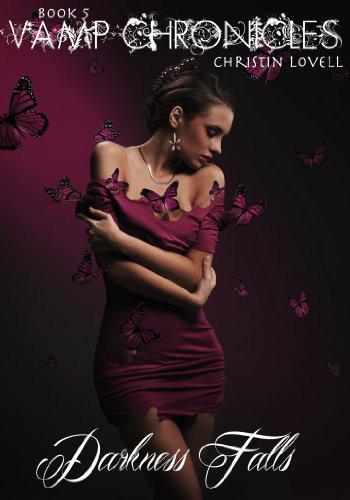 Lexi’s life is changing, but her enemies aren’t. She and Kellan are running against the clock as the prophecy closes in on them.

And then one falls…

In the newest heart-pounding edition of the Vamp Chronicles, follow Lexi, Kellan, Kai and their friends as their worlds collide and are turned upside down. Relationships are challenged and new alliances are formed as vampeens and vampires come together in the greatest battle yet.

Love will be redefined as death claims one of their own. There is more at risk than ever now that a little one is on the way…

Can Kellan escape fate? Or will Kai rise up to claim Lexi as his destiny?

This ebook is licensed for your personal enjoyment only. This ebook may not be re-sold or given away to other people. If you would like to share this book with another person, please purchase an additional copy for each person you share it with. If you're reading this book and did not purchase it, or it was not purchased for your use only, then you should return to Smashwords.com and purchase your own copy. Thank you for respecting the author's work.

Love is patient and

does not envy or boast; it

does not insist on its own way; it

is not irritable or resentful
;

does not rejoice at wrongdoing, but

rejoices with the truth.

“Are you sure you don’t want me to come with you?” Kellan checked with me for what seemed like the thousandth time. He wrapped his arm around my waist, drawing me closer to him. He gazed deeply into my eyes, prepar
ing
to analyze my answer.

“I’m positive. This is something best done by me and me alone. Having you anywhere nearby would be a mistake.” I swallowed past the serum, rising in the back of my throat; I recognized my body’s response
for
what it was: fear. I dreaded this moment
…
I was dreading his reaction.

“I’m coming with you. I’ll stay outside, but you can’t go unguarded.” Drexel crossed his arms, his buff biceps nearly doubling as they wrapped around his chest. His mind was set; his words rang with finality. This wasn’t up for discussion.

The vamp army decided to keep Drexel enlisted as my personal bodyguard
,
until further notice. He didn’t bother me.
Actually, we’ve
become good friends, and when I didn’t want anyone around, he was great at blending into the background.

I pursed my lips, taking in his stance. Knowing I wasn’t going to escape his company, I agreed. “Okay.”

I had the drive,
and
the common sense, to
be
more
careful
, now that there was a baby inside me
. Since
telling
Kellan, his parents, Drexel and Sanders
,
two days ago, they’
ve all
gone into overprotective mode. When I met Aunt Claire and Auggy for lunch yesterday,
even
they both started issuing commands about taking extra precautions
…that was,
after their initial shock subsided
.

Just thinking about
who I had to tell next,
my stomach twisted tightly;
I was certain I wasn’t going to get
a favorable
response from him.

Kellan exhaled a deep breath. His eyes glittered as he gazed into mine. “Call me when you’re done.” He paused, giving me a once over. “Don’t let him get to you. It doesn’t matter what he thinks, okay?”

I nodded my head. I knew he was right. Regardless of what was said, I couldn’t take it personally; I couldn’t
allow
it
to
eat away at me.

Kellan
leaned in to
kiss me, his lips soothing away my anxiety for a brief moment. “I love you.”

“Let’s go, Baby C
akes,” Drexel said. He grabbed the car keys off the island and headed for the door.

He shrugged. “You’re pregnant and you bake cakes.”

“I hope that one doesn’t stick.”

“We’ll see.” He ushered me out the door.
Shutting and locking
the door behind us,
he took
the time to ensure the lock was secure.

We walked to the elevator side by side. My heart thumped loudly with each step. Mindlessly, I placed a hand over my lower stomach at the same time
I
pressed the call button. Catching my move, I shoved my hands in the pockets of my jean shorts.

Pregnancy was already affecting my temperature. It was summertime, but it felt more unbearable than usual. I
was wearing
a comfortable, silky
,
black cotton tank top with my
faded, rolled-up, blue jean
shorts and a pair of grass green Ked tennis shoes. Flip-flops were
always
my preference, but they weren’t
exactly
practical
,
if I needed to run in an emergency. I tossed my hair up off my neck as
high as
I could manage to get it.

I stared at the elevator doors. “Why don’t we take the stairs?” In all the time I’d lived here, I
’ve never
once taken the stairs.

“Too many attack points
,
and only one escape route.”

I considered his words
, picturing
the sing
le
doors on each level
that would allow
anyone access
to
the stairwell
…
and
ultimately
us
. Having so many access points would make
it eas
y for someone
to corner us
,
unless we could get to the bottom before our attackers reached us. A chill ran down my spine
, thinking about this horr
ific
possibility.

I sh
uddered,
shaking off the mental image
s
. I never realized what a tactical nightmare stairs were. “Makes sense,” I simply stated.

The sideways look Drexel was giving me indicated he knew my inner thoughts
and
knew I’d envisioned the entire idea.

The elevator dinged, the doors opened and we boarded.
Pressing
the button for
the first floor
,
the doors closed
in front of us.

Drexel fidgeted beside me,
the
rustling
of his clothes
drew my attention
.
“I’ve, uh, been meaning to talk to you. Now that you’re pregnant, you’ll want space for a nursery. I don’t mind if you need the room back.” Drexel
sounded so unsure of himself. Focusing forward, he stared at
the stainless steel elevator door. I could see his hands
fiddling
inside his cargo pockets.

Placing
a hand on his forearm
, I reassured him
. “Drex, I gave you that room. I would never take it away from you. Plus, we’re going to turn the bonus room into the nursery. It’s right beside the master bedroom
,
and it works out better
,
since I’ll want to be near the baby.”

His lips scrunched together. “Let me know if you change your mind.”

I punched his arm
, and instantly, he spun around to face me
. I locked eyes with hi
m,
crossing my arms over my chest in defiance. “I’m not going to change my mind
,
so get it out of your thick head that I will. I don’t know what happened in your past to make you think that everyone is going to walk away from you at some point,
taking everything with them,
but I’m not
them
. Don’t pass the same judgment onto me.”

His eyes glittered
,
as he tried to hold back a smile. “I believe you.”

I rolled my eyes. “Why must men be so hardheaded?”

“History shows that nothing changes; everything repeats itself.”

“Yeah, well, it’s about time someone changes that.”

He couldn’t hold back
his
smile any
longer;
it
lifted his cheeks,
split
ting
his face
.
“The next nine months are going to be a blast.”

The elevator chimed
,
announcing our arrival
.
The doors opened, delivering us
to
the first floor. “I’m not going to be one of those crazy
,
pregnant women.”

“Marvelous!” Will exclaimed, popping up from behind the counter of the concierge desk. He was grinning from ear to ear. “The lad actually had it in him,” he murmured. He was beaming as he closed the distance between us.

I studied him for a moment, my mind mulling over his words. It took time for everything to align. “That’s what you meant when you said
‘
we had to do what we were meant to
’
in the condo, right?”

“I shall plead the fifth.” He winked at me.

I frowned. “This was in the prophecy?”

“Hidden beneath a million hints.”

“So the people who have read it wouldn’t necessarily know about this aspect, would they?” I pulled my lip between my teeth, worry gnawing at me. Kai had read the prophecy.

“Certainly not
!
The child is born at a climactic point; the context blurs the image. Many would assume you received merely a war injury.”

“Wow
…
that makes me feel so much better.” I tried not to think about the future, of what he was insinuating.

“Like many historical documents, much is left to interpretation, Alexa, and not everyone will interpret it alike.” He gazed down at my stomach. “Do take care of yourself though. That’s more than a baby; it’s the symbol of unity between vampeens and vampires.”

“I will.” My thoughts trailed off,
wandering like they
do each time I sp
eak
with Will. He meant well, but… I
feel
like my life should be lived
. I shouldn’t let
two strangers dictate my every move.

Will’s brows furrowed
,
as he sighed. “What is running through that head of yours now?”

“I’m sure.” He stood straighter, clasping his hands together behind his back.

“It seems like everyone knows my life better than I do at times.
You
seem to know what I’m going to do before
I
do. It adds an extra layer of pressure.”

“On the contrary
,
I know the highlights of your life, Lexi. I don’t know the finer details that create the big picture. I have but half of the puzzle. It’s not my job to whittle away at your life experiences; it’s my job to help guide you through them. I
shouldn’t be taking away from them or adding to them.
I wish merely to assist you in your journey. Nothing more, nothing less.”

Intermix Nation by M.P. Attardo
The Corridors of Time by Poul Anderson
Project Aquarius (The Sensitives Series Book 1) by Colleen Jordan
The Book of Love by Lynn Weingarten
A Season Inside by John Feinstein
Bound by Spells (Bound Series Book 2) by Smith, Stormy
The Necessary Death of Lewis Winter (Glasgow Trilogy) by Mackay, Malcolm
Consultation with a Vampire - 01 by Patrick E. McLean
Revenge in a Cold River by Anne Perry
A Firm Merger by Ganon, Stephanie
Our partner