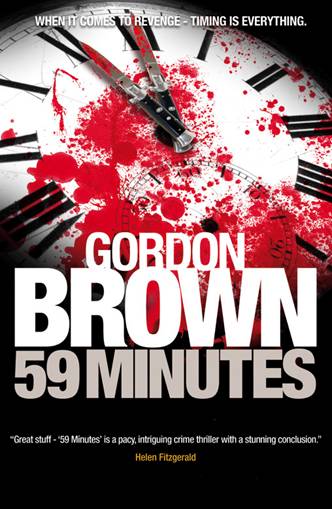 First Published in 2010 by Fledgling Press

The moral right of Gordon Brown to be identified as the

author of this work has been asserted by him in
accordance with the Copyright, Designs and Patents Act, 1988.

reproduced or transmitted, in any form by any means,

electronic or mechanical, including photocopying,

recording or any information storage or retrieval
system,

without prior permission from the publisher or
copyright owner.

All the characters in this book are imaginary. Any

resemblance to real people, living or dead, is purely

coincidental. Some places are real, others are in the

imagination of the author. Any errors are those of
the author.

A CIP catalogue reference for this book is available

from the British Library

Gordon
Brown was born and lives in
Glasgow
. He is married with two children - having spent twenty
five years in the sales and marketing world working on everything from alcohol
to global charities and from TV to lingerie.

Gordon
started out life packing shelves for Sainsbury’s before moving to
Canada
to join
the brewery business. He set up his own marketing business in 2001 and has an
honours degree from Strathclyde along with an MBA from
Nottingham
Trent
University
.

Gordon
has been writing for pleasure for some twenty years and this is his second
novel following the success of his debut - Falling.

This book is dedicated to my
mum - thanks for everything.

The bastard kissed the tips of his fingers, reached
down and patted me on the head. I looked up and saw the smile leave his face.

I struggled to get up but my attacker and the man from
the Spanish photo were good for the game and I was pinned to the floor. The
first fist caught me behind the ear - the knuckleduster slicing open my skull.
Snap, crackle and pop and the second fist mashed my nose to mince.

The door to the room closed as the bastard left and it
was time for more pain. The attacker reached between my legs and grabbed at my
balls. The squeeze was so hard it felt like one of them burst. A thumb searched
for my left eye socket and a forefinger for my right - fluid spurted and
darkness fell.

Then they got serious.

The clock
on the wall says eleven oh one. The second hand has crested the apex and we are
now into the second minute after the hour and counting. I can’t see it move
but, with a fascination that owes everything to my circumstances, I know the
tick of that second hand intimately, lovingly, fearfully and a shed load of
other adverbs that would bore you to the core.

Fifty eight minutes and fifty four seconds
to go. Not long now. There are important things that I need to tell you in the
minutes that remain to me. So many things, that we may not have the time we
need.

But I will try.

Why? Why will I try to tell you these
things? Because I need to tell someone and you are better placed than most, far
better placed than most, to listen and understand. Listening is not even your
responsibility. Understanding is what you need to do. It is up to me to make
you listen. If I fail, you will drift away like the sober leaving the drunk.

But I doubt this.

As we travel together down this short path,
there will be a number of questions that you will want to ask. I’ll tell you
now that I won’t answer them. I’m sorry I can’t be more co-operative but debate
is a locked five bar gate on our trip.

Can you also forgive me if I become a
little vague or distracted? My mind may wander. It is inevitable. It is
probably essential. My story may need some detours to make sense.

To help, I have left a diary, of sorts, for
you to read. It is there beside you. The big black book with the gold block
lettering on the spine. Who gave me it is of no great importance. It is nothing
more than the sort of gift you would get from a distant aunt at Christmas.

Please do not pick it up. Not now.

So, where should I start? Where would you
start with a clock ticking like a time bomb?

‘Start at the beginning and go on. And when
you reach the end stop.’

It is a bad lift from
Alice
in Wonderland but you get the gist.

By the way it is nearly eleven oh two. I
must move on.

I was born in the west end of
Glasgow
. Partick to be exact. I was never the healthiest of
kids. I had a tendency to monopolise whatever bug was doing the rounds. I
missed much of my schooling, replacing it with an in-depth knowledge of
doctor’s surgeries, hospitals, my bedroom, my grandmother’s bedroom and a
private TB clinic. Suffice to say I left school with no qualifications and
little prospects.

It would be nice to say I went on to make
good and earn my fortune the honest way. An entrepreneur of note. But that
would be a crock of crap. True, I made money but I also managed to make a
turkey sandwich of my life on the way. I held promise and I excelled in places
that others failed but ultimately I washed my life down a large plug hole and
watched the water spin away - carrying my heart beats and my ambition to a dark
place.

After leaving school, I found employment
with a friend of my father. It was menial work. The sort that requires little thought,
a lot of graft and rewards you with a thin pay packet.

My father’s friend was a man called George
Matthews. George owned an engineering firm on the outskirts of
Glasgow
that employed twenty men who slaved hard to produce
spare parts for the automotive industry. The hours were long and the factory
had to sweat for its money. Saturday and even Sunday shifts were the norm for
the first two years of my working life. I lost contact with my schoolmates and
found it hard to acquire new friends at work.

Being far younger than anyone else in the
building my nickname was not very original - ‘Junior’ - and since the work’s
recreation revolved around the Lame Duck pub I was, at sixteen years of age,
excluded from that particular avenue of respite.

Michael Tolt was my only friend of note
from back then. It is Michael, dead these many years, that is, in part,
responsible for me sitting here talking to you.

When I joined the firm I was his saviour.
In an instant, the scorn that the factory poured upon its youngest member fell
from his shoulders and onto mine. I think he always knew this was a shit deal
and in compensation he became the one person I could talk to at break time or
see outside of work.

He was a fanatic for football, and for Partick
Thistle in particular. Over the years he dragged me along to a nightmare
collection of games. He never tired of his obsession and was rewarded for his
long term service with the club when, on the 23
rd
October 1971,
against all predictions, they took on the might of Celtic in the League Cup
final and hammered them four – one.

I still remember standing on the terraces
at
Hampden
Park
at half time - Partick
were four up against one of the best sides in
Europe
.
To say that there was a party atmosphere wasn’t even close to the truth on that
day. There may never be a finer moment to be a Jags fan.

But I had no love of the club and I was the
least excited person in the Partick Thistle throng. But the game did bring one
defining moment with it. After the match I was permitted entry into the
hallowed halls of The Lame Duck for my first drink. Having turned
eighteen the day before,
the stained floorboards, dank smoky air and rank smell of a million men’s farts
were mine for the taking.

Eleven oh four and ten
seconds. Time slips past so fast. I must keep my foot on the gas.

I left Matthews Engineering two months
later. I couldn’t take it anymore. The combination of poor hours, the lack of
pay and the endless insults forced me out and onto the ‘Bru’ - to survive on
state handouts.

Neither
my mother nor my father were in the happy world about this. They were reliant
on my contribution to the house to help offset the mountain of debt they had
acquired. No, and let’s be honest about this, the debt was not theirs but my
father’s, and my father’s alone, the local bookie being the open drain he so
easily poured our cash into.

When I left the job I intended to find
other employment as quickly as possible. But
Britain
was heading for its worst recession since the thirties and with no
qualifications, no skills and, probably most damning of all, no connections I
was prime meat for the local criminal fraternity. After six months of fruitless
interviews and rejections Michael Tolt stepped in with an offer that was hard
to refuse.

He informed me, over a pint in The Lame Duck,
that a friend of his was looking for a reliable lad to run some errands. This
friend needed someone who could keep his mouth shut, do as he was told and, in
return, would receive five pounds a week. The icing was that I could still sign
on.

A week later I met Tony ‘the Nose’
Campbell
.

‘The Nose’ lived in one of the better houses
in the West End of Glasgow: a home stuffed with antiques that meant nothing to
me but were expensive as hell. My interview with him was short and sweet. I was
told that the job was mine as long as my lips didn’t part and I took orders
like an SS guard. I agreed and was dispatched to the east end of the city with
a list of addresses scribbled on the back of a fag packet.

In each case I was expected to turn up at
the door and inform the inhabitant that ‘the Nose’ had sent me. In return I was
usually given an envelope, which I stuffed in my pocket.

The door openings were never pleasant. I
was never welcome. I was never asked in. I was verbally and, occasionally,
physically abused. But most people still handed over their envelope.

On the rare occasions I was given no
envelope, I had instructions to circle their names with a red pen. When I
handed the envelopes, and the list, back to ‘the Nose’, he would ask if anyone
had ‘Red Ringed’ him today. If I said ‘yes’, a strange smile would cross his
lips.

A ‘Red Ringed’ house always had an
envelope waiting for me on my next visit - the reluctant giver with a face that
looked like it had met with a train head on.

Occasionally a house would be struck off my
list. Usually a multiple ‘Red Ringer’.

The Fifth Clan by Ryan T. Nelson
Men Explain Things to Me by Rebecca Solnit
Salticidae by Ryan C. Thomas
How a Cowboy Stole Her Heart by Donna Alward
For Her Protection: An Alpha Romance by Amber Bardan
The Stranger by Harlan Coben
Who Made You a Princess? by Shelley Adina
The Secret of the Seal by Deborah Davis
Blaze: Kings of Hell MC by Leah Wilde
The Naked Drinking Club by Rhona Cameron
Our partner