Read A Baron for Becky Online

A Baron for Becky 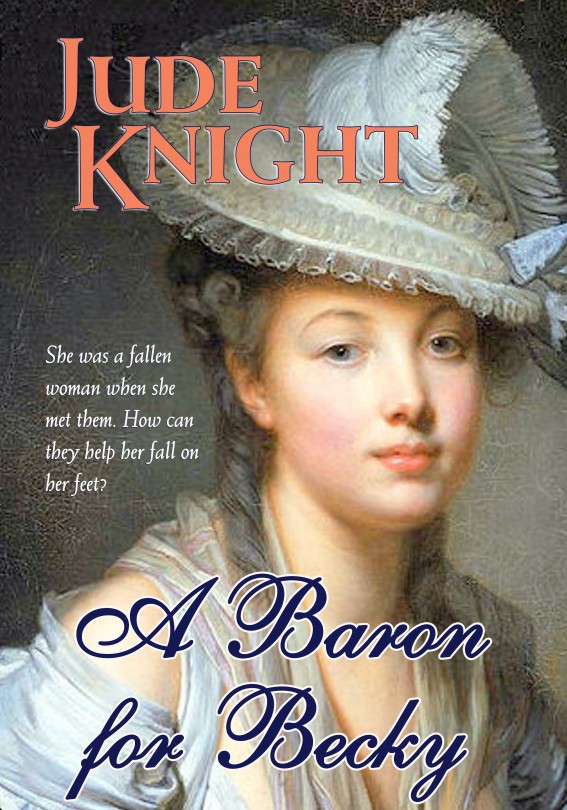 A
Baron for Becky

This ebook is licensed
for your personal enjoyment only, and may not be re-sold or given
away to other people. If you would like to share this book, please
purchase an additional copy for each recipient. If you’re reading
this book and did not purchase it, or it was not purchased for your
use only, then please return to your favourite retailer and
purchase your own copy. Thank you for respecting the hard work of
this author.

All rights reserved. No
part of this book may be reproduced in any form or by any means
without the prior written consent of the author, except for
including brief quotations in a review.

This book is dedicated
to my husband, with whom I have learned how hard
marriage is, and how rewarding.

In the nursery, the two little girls waited, sombre
in their mourning blacks. Hugh, Baron Overton, had not paused in
the hall below. He handed his gloves and his tall hat with its
crepe band to the nursemaid, barely caring whether she caught them.
He had eyes only for the poor, orphaned mites left in his care.

He knelt, so he
didn’t loom over them, and they both shrank a little, clinging to
one another. Were they frightened of him? He had never hurt them;
in the four years he’d been married to their Mama, he’d barely seen
them.

He could tell
himself he’d been busy putting his unexpected inheritance back on a
sound financial footing. And it had worked: those long voyages to
secure cotton for the mill in Liverpool, trips to London for
buyers, constant scurrying to and from the West Indies and the
length and breadth of England.

But the truth
was, he’d also been avoiding their Mama. Only after he’d married
the widow did she tell him she hated him—only after the birth of
her deceased husband’s daughter and her own reluctant consent to
take him into her bed. Only then did she tell him that she couldn’t
bear the scars on his face and body; that it made her ill to touch
him.

Was it the
scars the girls feared? He turned his head a little, so the light
fell on the unmarked side of his face. What did one say to little
girls of four and seven?

The older one
stiffened her thin shoulders and stuck out her chin, all
determination. “Papa?” she said. “Have you come to send us to the
orfasemery, Papa?’

“I don’t plan
to send you anywhere, Sophrania,” he said, “but I don’t understand?
What is an orfasemery?”

She frowned
with him, and repeated the words, articulating clearly and slowly.
“The orfa semery. Where the orfas live. After their Mama dies.”

Orphans. He
would not have understood, if he’d not been thinking the word
himself. Later, he would find out which of the maids had been
frightening his daughters with tales of an orphans’ seminary. For
now...

“You live here,
my dears, with me. I am your Papa. This is your home. No one will
send you away, I promise. You are not orphans. You have a
Papa.”

He settled
back, so he was sitting on the floor with the wall as a backrest
and his legs outstretched. “Come here, Sophrania. Come here,
Emmaline.”

Cautiously,
they approached his welcoming arms, each sitting gingerly upright
on a thigh.

He rested a
gentle hand on each small back, and—on a sudden inspiration—began
telling them stories about his own time in this very nursery with
his three cousins. And, moment by moment, they relaxed, until he
had a little girl nestled on each shoulder, prompting a surge of
tender protectiveness.

He had not been
a good Papa, but he was all they had. He would have to do
better.

Aldridge never did find
out how he came to be naked, alone, and sleeping in the small
summerhouse in the garden of a country cottage. His last memory of
the night before had him twenty miles away, and—although not
dressed—in a comfortable bed, and in company.

The first time
he woke, he had no idea how far he’d come, but the moonlight was
bright enough to show him half-trellised window openings, and an
archway leading down a short flight of steps into a garden. A house
loomed a few hundred feet distant, a dark shape against the
star-bright sky. But getting up was too much trouble, particularly
with a headache that hung inches above him, threatening to split
his head if he moved. The cushioned bench on which he lay invited
him to shut his eyes and go back to sleep. Time enough to find out
where he was in the morning.

When he woke
again, he was facing away from the archway entrance, and someone
was behind him. Silence now, but in his memory, the sound of light
footsteps shifting the stones on the path outside, followed by twin
intakes of breath as the walkers saw him.

One of them
spoke; a woman’s voice, but low—almost husky. “Sarah, go back to
the first rosebush and watch the house.”

Aldridge waited
until he heard the child dance lightly down the steps and away
along the path, then shifted his weight slightly letting his body
roll over till he was lying on his back.

He waited for
the exclamation of shock, but none came. Carefully—he wanted to
observe her before he let her know he was awake, and anyway, any
sudden movement might start up the hammers above his eye sockets—he
cracked open his lids, masking his eyes with his lashes.

He could see
more than he expected. The woman was using a shuttered lantern to
examine him, starting at his feet. She paused for a long time when
she reached his morning salute and it grew even prouder. Then she
swept her light up his torso so quickly he barely had time to slam
his lids shut before the light reached and lingered over his
face.

She was just a
vague shadow behind the light. He held himself still while she
completed her examination, which she did with a snort of disgust.
Not the reaction to which he was accustomed.

“Now what do we
do?” she muttered. “Perhaps if Sarah and I...? I will have to cover
him. What on earth is he doing here? And like that? Not that it
matters. Unless he has something to do with Perry? Or the men he
said would come?” Incipient panic showed in the rising pitch and
volume, until she rebuked herself. “Stop it.” She took a deep
breath and let it out slowly. “Stay calm. You must think.”

Aldridge risked
opening his eyes a mere slit, and was rewarded by a better look at
the woman as she paced up and down the summerhouse, in the light of
the lantern she’d placed on one of the window ledges.

Spectacular.
That was the only appropriate word. Hair that looked black in the
poor light, but was probably dark brown, porcelain skin currently
flushed with agitation, a heart-shaped face and a perfect cupid’s
bow of a mouth, the lower lip—which she was currently
chewing—larger than the upper.