Read A Death In The Family Online

A Death In The Family 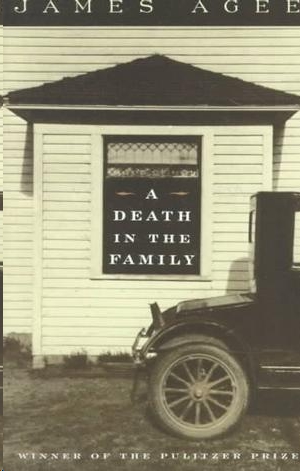 “The work of a writer whose power with English words can make you gasp.”

“James Agee has reminded us of human weakness and human strength, and reminded us that human beings can be brave and kind and tender when fate deals its heavy blows. This story has nobility, a quality in human nature not often emphasized in contemporary writing.”

“His descriptions of people, places and scenes, are not only accurate but deeply poetic and moving.”

“Such a novel as this belongs with things to be cherished always.”

by The James Agee Trust.

by The New Yorker Magazine, Inc,

by The James Agee Trust.

Published by arrangement with

Acknowledgment is here made to

in which portions of this novel first appeared.

IN THE CITY OF NEW YORK

to whom these presents may come

be it known that

A DEATH IN THE FAMILY

in accordance with the provisions of the statutes of the University governing such award.

In witness whereof we have caused this certificate to be signed by the President of the University and our corporate seal to be hereto affixed in the City of New York on the fifth day of May in the year of our Lord one thousand nine hundred and fifty eight.

A NOTE ON THIS BOOK

James Agee died suddenly May 16, 1955. This novel, upon which he had been working for many years, is presented here exactly as he wrote it. There has been no re-writing, and nothing has been eliminated except for a few cases of first-draft material which he later re-worked at greater length, and one section of seven-odd pages which the editors were unable satisfactorily to fit into the body of the novel.

The ending of
A Death in the Family
had been reached sometime before Agee’s death, and the only editorial problem involved the placing of several scenes outside the time span of the basic story. It was finally decided to print these in italics and to put them after Parts I and II. It seemed presumptuous to try to guess where he might have inserted them. This arrangement also obviated the necessity of the editors having to compose any transitional material. The short section
Knoxville: Summer of 1915
, which serves as a sort of prologue, has been added. It was not a part of the manuscript which Agee left, but the editors would certainly have urged him to include it in the final draft.

How much polishing or re-writing he might have done is impossible to guess, for he was a tireless and painstaking writer. However, in the opinion of the editors and of the publisher,
A Death in the Family
is a near-perfect work of art. The title, like all the rest of the book, is James Agee’s own.

We are talking now of summer evenings in Knoxville, Tennessee in the time that I lived there so successfully disguised to myself as a child. It was a little bit mixed sort of block, fairly solidly lower middle class, with one or two juts apiece on either side of that. The houses corresponded. middle-sized gracefully fretted wood houses built in the late nineties and early nineteen hundreds, with small front and side and more spacious back yards, and trees in the yards, and porches. These were soft-wooded trees, poplars, tulip trees, cottonwoods. There were fences around one or two of the houses, but mainly the yards ran into each other with only now and then a low hedge that wasn’t doing very well. There were few good friends among the grown people, and they were not poor enough for the other sort of intimate acquaintance, but everyone nodded and spoke, and even might talk short times, trivially, and at the two extremes of the general or the particular, and ordinarily next-door neighbors talked quite a bit when they happened to run into each other, and never paid calls. The men were mostly small businessmen, one or two very modestly executives, one or two worked with their hands, most of them clerical, and most of them between thirty and forty-five.

But it is of these evenings, I speak.

Supper was at six and was over by half past. There was still daylight, shining softly and with a tarnish, like the lining of a shell, and the carbon lamps lifted at the corners were on in the light, and the locusts were started, and the fire flies were out, and a few frogs’ were flopping in the dewy grass, by the time the fathers and the children came out. The children ran out first hell bent and yelling those names by which they were known; then the fathers sank out leisurely in crossed suspenders, their collars removed and their necks looking tall and shy. The mothers stayed back in the kitchen washing and drying, putting things away, re-crossing their traceless footsteps like the lifetime journeys of bees, measuring out the dry cocoa for breakfast. When they came out they had taken off their aprons and their skirts were dampened and they sat in rockers on their porches quietly.

It is not of the games children play in the evening that I want to speak now, it is of a contemporaneous atmosphere that has little to do with them: that of the fathers of families, each in his space of lawn, his shirt fishlike pale in the unnatural light and his face nearly anonymous, hosing their lawns. The hoses were attached at spiggots that stood out of the brick foundations of the houses. The nozzles were variously set but usually so there was a long sweet stream of spray, the nozzle wet in the hand, the water trickling the right forearm and the peeled-back cuff, and the water whishing out a long loose and low-curved cone, and so gentle a sound. First an insane noise of violence in the nozzle, then the still irregular sound of adjustment, then the smoothing into steadiness and a pitch as accurately tuned to the size and style of stream as any violin. So many qualities of sound out of one hose: so many choral differences out of those several hoses that were in earshot. Out of any one hose, the almost dead silence of the release, and the short still arch of the separate big drops, silent as a held breath, and the only noise the flattering noise on leaves and the slapped grass at the fall of each big drop. That, and the intense hiss with the intense stream; that, and that same intensity not growing less but growing more quiet and delicate with the turn of the nozzle, up to that extreme tender whisper when the water was just a wide bell of film. Chiefly, though, the hoses were set much alike, in a compromise between distance and tenderness of spray, (and quite surely a sense of art behind this compromise, and a quiet deep joy, too real to recognize itself), and the sounds therefore were pitched much alike; pointed by the snorting start of a new hose; decorated by some man playful with the nozzle; left empty, like God by the sparrow’s fall, when any single one of them desists: and all, though near alike, of various pitch; and in this unison. These sweet pale streamings in the light lift out their pallors and their voices all together, mothers hushing their children, the hushing unnaturally prolonged, the men gentle and silent and each snail-like withdrawn into the quietude of what he singly is doing, the urination of huge children stood loosely military against an invisible wall, and gentle happy and peaceful, tasting the mean goodness of their living like the last of their suppers in their mouths; while the locusts carry on this noise of hoses on their much higher and sharper key. The noise of the locust is dry, and it seems not to be rasped or vibrated but urged from him as if through a small orifice by a breath that can never give out. Also there is never one locust but an illusion of at least a thousand. The noise of each locust is pitched in some classic locust range out of which none of them varies more than two full tones: and yet you seem to hear each locust discrete from all the rest, and there is a long, slow, pulse in their noise, like the scarcely defined arch of a long and high set bridge. They are all around in every tree, so that the noise seems to come from nowhere and everywhere at once, from the whole shell heaven, shivering in your flesh and teasing your eardrums, the boldest of all the sounds of night. And yet it is habitual to summer nights, and is of the great order of noises, like the noises of the sea and of the blood her precocious grandchild, which you realize you are hearing only when you catch yourself listening. Meantime from low in the dark, just outside the swaying horizons of the hoses, conveying always grass in the damp of dew and its strong green-black smear of smell, the regular yet spaced noises of the crickets, each a sweet cold silver noise three-noted, like the slipping each time of three matched links of a small chain.

But the men by now, one by one, have silenced their hoses and drained and coiled them. Now only two, and now only one, is left, and you see only ghostlike shirt with the sleeve garters, and sober mystery of his mild face like the lifted face of large cattle enquiring of your presence in a pitch-dark pool of meadow; and now he too is gone; and it has become that time of evening when people sit on their porches, rocking gently and talking gently and watching the street and the standing up into their sphere of possession of the trees, of birds hung havens, hangars. People go by; things go by. A horse, drawing a buggy, breaking his hollow iron music on the asphalt; a loud auto, a quiet auto, people in pairs, not in a hurry, scuffling, switching their weight of aestival body, talking casually, the taste hovering over them of vanilla, straw berry, pasteboard and starched milk, the image upon them of lovers and horsemen, squared with clowns in hueless amber. A street car raising its iron moan, stopping, belting and starting; stertorous; rousing and raising again its iron increasing moan and swimming its gold windows and straw seats on past and past and past, the bleak spark crackling and cursing above it like a small malignant spirit set to dog its tracks; the iron whine rises on rising speed; still risen, faints, halts; the faint stinging bell, rises again, still fainter, fainting, lifting, lifts, faints forgone: forgotten. Now is the night one blue dew.