Read A Disease in the Public Mind Online

A Disease in the Public Mind 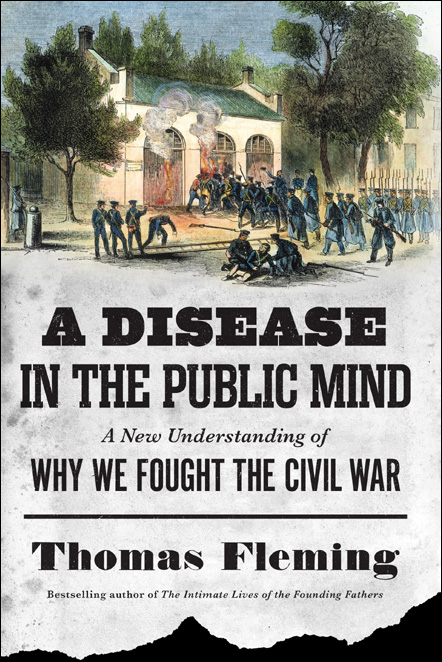 A DISEASE
IN THE
PUBLIC MIND

A NEW UNDERSTANDING OF WHY

WE FOUGHT THE CIVIL WAR

All rights reserved. No part of this publication may be reproduced, stored in a retrieval system, or transmitted, in any form or by any means, electronic, mechanical, photocopying, recording, or otherwise, without the prior written permission of the publisher. For information, address Da Capo Press, 44 Farnsworth Street, 3rd Floor, Boston, MA 02210.

A disease in the public mind : a new understanding of why we fought the Civil War / Thomas Fleming.

To see this country happy is so much the wish of my soul, nothing on this side of Elysium can be placed in competition with it.

We are truly to be pitied.

If you would win a man to your cause, first convince him that you are his sincere friend. Therein is a drop of honey that catches his heart.

CHAPTER 25
Â Â Â Â
The Hunt After the Captain

The Civil War freed almost four million Americans from the humiliations and oppressions of slavery. It is undoubtedly one of America's greatest triumphs. As we celebrate the 150th anniversary of this huge event, however, we must also grieve. The Civil War is simultaneously America's greatest tragedy. No other conflict in the nation's 237-year history can compare to the anguish and grief it inflicted on the men and women who were engulfed by it.

For almost a century, the accepted figure for the number of soldiers killed in the war was 618,222. Recently, an historian who has restudied the census records of 1870 and 1880 has concluded that the toll was at least 750,000. There is a strong possibility that the correct number is 850,000. The Southern Confederacy's records vanished with their defeat. Their toll is only an estimate. If we include the wounded men who died prematurely over the next two decades, the toll for both sides may be 1,000,000. This much is certain: more soldiers died in that four-year struggle than the nation lost in all her previous and future wars combined.
1

What makes these numbers especially horrendous is the fact that America's population in 1861 was about 31 million. In 2012, U.S. population is about 313 million. If a similar conflict demanded the same sacrifice from our young men and women today, the number of dead might total over 10 million. Think for a moment about how many stricken parents, wives,
fiancÃ©s, and children would be struggling to cope with this tidal wave of grief and loss.

The enormity of the Civil War's tragedy grows even larger when we realize that the United States is the only country in the world that fought such a horrific war to end slavery. Other nations with large slave populations, such as Great Britain, which had 850,000 slaves in its West Indies islands, Cuba, which had almost 1,000,000, and Brazil, which had at least 3,000,000, ended the deplorable institution with relatively little bloodshed. Even Czarist Russia, with its millions of semi-slaves known as serfs, freed them without a war. Why were the Americans, with a government designed to respond to the voiceâor voicesâof the people, compelled to resort to such awful carnage?
2

The question becomes even more perplexing when we consider another startling fact. Only 316,632 Southerners owned slavesâa mere 6 percent of the total white population of 5,582,322. These figures become doubly baffling when a further analysis reveals only 46,214 of these masters owned 50 or more slaves, entitling them to the aristocratic-sounding term, “planter.” Why did the vast majority of the white population unite behind these slaveholders in this fratricidal war? Why did they sacrifice over 300,000 of their sons to preserve an institution in which they apparently had no personal stake?

I have devoted much of my literary life to writing about the American Revolution. My exploration of our founding years convinced me of the originality and importance of the heritage created by the men and women who won an eight-year struggle against the most powerful nation in the world and created the modern era's first republic. Ironically, this conviction made me even more baffled by the Civil War's eruption little more than a half century after George Washington, Thomas Jefferson, and their compatriots turned the leadership of the new nation over to the next generation.

I never thought I would do more than muse about the Civil War until my good friend, Byron Hollinshead, director of American Historical Publications and former publisher of two distinguished history magazines, asked me to contribute to a book entitled
I Wish I'd Been There.
A gallery of
well-known historians was asked to insert themselves into famous events of the past and describe them as if they were on the scene. I became a spectator/ actor in John Brown's 1859 raid on Harpers Ferry.

I was mesmerized, not only by the chief protagonist, but by the reactions of prominent contemporaries, ranging from Robert E. Lee to Abraham Lincoln to Ralph Waldo Emerson. Especially fascinating was the statement of the president of the United States in 1859, James Buchanan. Brown's reckless venture was caused, Buchanan said, by “an incurable disease in the public mind.” In his final message to Congress in 1860, as Southern states seceded and Civil War loomed, he repeated the assertion
.

Buchanan's frequently hostile biographers have all dismissed or ignored these words. They caught my attention because in two of my previous books, I have explored how illusions play a role in history. Was the president talking about this sort of distortion?
3

No Place Like Home by Leigh Michaels
Faithfully by Izzy Cullen
21st Century Science Fiction by D B Hartwell
Liam's Witness Protection (Man On A Mission 4) by Amelia Autin
Oral Literature in Africa by Ruth Finnegan
Destiny Calling by Maureen L. Bonatch
The Flemish House by Georges Simenon, Georges Simenon; Translated by Shaun Whiteside
Meet Me in Atlantis: My Obsessive Quest to Find the Sunken City by Mark Adams
Wife With Amnesia by Metsy Hingle
The Chinese Garden by Rosemary Manning
Our partner