Read A Double Dose of Billionaire (Part One) Online

A Double Dose of Billionaire (Part One) 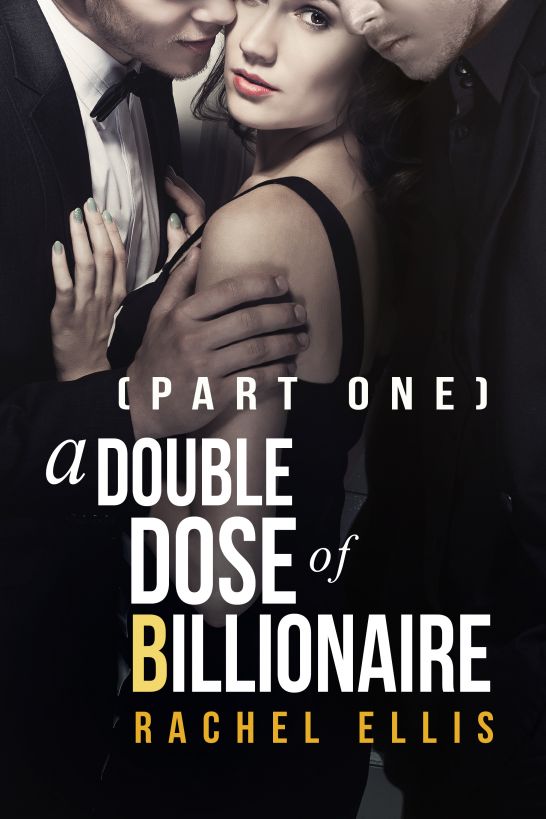 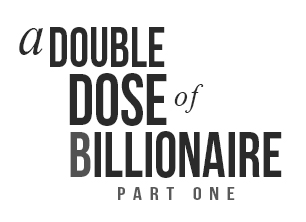 A Double Dose of
Billionaire

Any resemblance to real persons,
living or dead, is purely coincidental. This is a work of
fiction.

I woke up feeling like I’d been hit by a
truck.

Where the hell was I anyway? The sheets
smelled different from my own; cleaner actually. I opened my eyes
and took a look around.

Yeah, I definitely woke up in the wrong
room.

Shocked, I held my breath, although I honestly
shouldn’t have been shocked. I got drunk last night and ended up in
a place I couldn’t recognize—what else was I to expect?

And then I realized that something rod-like
was pressing against my thigh.

I jumped out of the bed, dragging the blanket
with me, which turned out to be a bad idea. The blanket slipped off
the bed, leaving the strange man lying in all his naked glory, his
muscled frame and morning wood splayed out for me to
see.

Damn, he had a hot body.

Focus,
I told myself. That wasn’t the
main point right now.

I broke up with my boyfriend yesterday and
ended up having a one night stand.
That
was the main
point.

The man propped his head with his hands and
smirked. “Why so jumpy? You didn’t seem to mind it last night.” My
eyes travelled lower than they should have—boy, was it
large.

I covered my eyes with my palm, partly to stop
myself from looking, partly to show my exasperation. “Okay, mister.
This was a mistake. I got drunk last night and I don’t know who you
are. Let’s just part ways and not meet each other ever again,
deal?”

He shrugged. “I’d prefer not to. Why don’t you
ask my brother first?”

Brother? What did his brother have anything to
do with this?

The shower’s door slid open, answering my
question. A replica of the man I just slept with stepped into the
room with water droplets clinging onto his skin, some of them
rolling down his beautiful, ripped chest and abs.

I looked back and forth. Both of the men had
the exact same face. I couldn’t tell the difference; brown hair,
cheeky grin, sexy morning green eyes.

Penises of the same girth.

“Oh, hey,” he said, wiping his hair with his
towel.

A ball of bile rose up my throat. I dashed
past the twin and careened toward the toilet.

I needed to puke.

We sat at the dining table. The brothers, Ryan
and Riley, were sitting across me. They took some time to explain
to me who was who, but I found it easy to tell them apart after
that.

The throbbing in my head hadn’t calmed down;
in fact, it got worse, and a second round of puking was threatening
to force its way up.

“Yep,” they replied in unison.

They nodded their heads, both seemingly having
fun watching the way I squirmed and panicked at the new tidbit of
information.

I collapsed on the table and shook my head. “I
need to wake up. What the hell am I supposed to do now?”

“We could have sex again,” Ryan joked. “It’s
Saturday morning.”

I raised a finger at his face. “I don’t want
to have anything related to you guys. My stand is the same as
before—I leave, and we never meet or talk about this ever again.” I
took my phone out and dialed for a cab.

Riley made us some coffee as I tried to ring a
taxi up. The booking service constantly redirected me and played
obnoxious music as I waited. It was Saturday morning! Why was it
still so hard to get a cab?

He handed me the coffee. “Thank you,” I said,
and then someone from customer service finally picked up the
phone.

“Taxi booking. How may I help you?”

“I need a cab for…” I covered the mouthpiece
and faced the twins. “Where are we again?”

Riley had a naughty smirk on his face, his
eyes directed to something behind me. Before I could turn around, I
felt Ryan’s heat on my skin. His hands travelled down my waist,
moving their way down and dangerously getting closer to my
sex.

“You should stay to play for a little while
longer,” Ryan whispered into my ear. His fingers stroked the
insides of my thigh. They circled around until one of them
‘accidentally’ brushed the flesh of my pussy.

How did this man get here so fast? He was
drinking coffee only moments ago.

I attempted to pull his hand away, though I
didn’t really want him to stop. My attempt was half-assed at best.
“Get your hands off me.”

He ignored my demand, pushed my panties aside,
and slipped his finger into my folds. I was wet and wanting for
him. Everything in me was aching to have him thrust his cock
inside.

“Are you sure? You seem quite ready for a good
fucking.” He nibbled on my ear. His tongue then worked his way down
my neck.

I bit my lower lip to stop myself from
groaning.

“Are you still there? Madam?” the call
operator prompted, pulling me back to reality.

I removed my hand from my cell. “Yes, yes, I’m
still here, trying to figure out the address.” And then I covered
it again, not wanting him to catch on to my heavy
panting.

Riley watched us from across the table. I
could see his boxers through the glass table. A healthy bulge had
started to form between his legs.

“Okay, can you stop it?” I asked again, this
time sounding more serious. “I’m not in the mood for this.” It was
a lie, but I hoped they didn’t think it too obvious.

The thrusts of his fingers suddenly got harder
and faster, and then after one final mind-blowing thrust that
rubbed my core, he pulled out.

I started seeing stars for a brief second
there. That was the best sensation I had ever felt—nothing any of
my ex-boyfriends ever achieved for me. To top it off, he did that
only with a finger.

And it ended too soon.

Disappointed and ashamed of how easy I was, I
caught my breath and said to the operator, “Never mind, I found
another ride.”

“Okay, no problem, please call us again soon,”
he replied. He sounded calm but I knew that he was annoyed about
having to deal with stupid customers like me. I had to deal with
stupid customers at my own job, too. I always had to sound calm
when they pissed me off.

I stood up and grabbed my purse.

“Where are you going?” Riley asked, standing
up as I did. He moved to block my way.

“But we were just starting to have
fun.”

I flashed him the most menacing glare I could
manage. “Move.”

“Whoa, scary,” he said, backing away in mock
fear. “After you, milady.”

I shoved my way past him and dashed out the
door, my panties completely soaked.

It had been easier to flag down a cab than I
expected. I supposed the twins stopping me from getting one turned
out to be a blessing, because I saved on the booking
fee.

But I wasn’t remotely thankful for
that.

I stomped out in such a hurry that I forgot my
wallet at the twins’ place. The cab driver had stared at me with
clear irritation when I circled my arm around my purse ten times
over.

Each time I had hoped that the wallet had
buried itself in some hard-to-reach crevice. After I dunked the
entire contents of my purse onto the cab’s backseat, it became
clear that my wallet wasn’t there.

The taxi driver tapped his fingers on the
steering wheel, looking very impatient. I ran down the steps to
him. “Thanks for waiting. Twenty dollars and fifty
cents.”

His jaw dropped as I poured the coins onto his
hand. One hand wasn’t large enough so he had to cup both of them
together.

“Don’t you have any notes?” he
asked.

“I found one five-dollar note. Here’s your
tip.”

He snatched the note from my hand and stared
at me as if I was the devil.

I smiled sheepishly at him, feeling bad for
him—he was an ordinary bloke simply trying to do his job. At least
he’d have a complaint to start small chat with later
today.

“Thanks for your time, sir.”

“Crazy bitch.” And then he drove
off.

That was most of the money I had in my piggy
bank. I really should have kept a spare credit card with me, but I
hated living on credit so I only owned one. That one credit card
was nicely tucked in my wallet. I planned to order pizza today and
do nothing but watch TV in my pajamas, but I guessed it was instant
noodles instead.

I slumped myself onto my beanbag and rubbed my
eyes. I still couldn’t believe that I had a three-way with two
drop-dead gorgeous brothers. Worst part of it was that I couldn’t
remember a single second of it.

Just when I was starting to get comfortable in
my beanbag, my doorbell rang. “Coming!” I said.

When I opened the door, the first thing that
struck me was confusion. “What are you doing here?”

Damien, my ex-boyfriend, was standing at my
front door.

He shoved a newspaper at my face. “What is the
meaning of this?” It was so close that I couldn’t make out the
images or words. When I stepped back so that I could finally see it
clearly, confusion hit me once again.

“What the hell am I doing on the front page?”
I asked, ripping the paper from his hands.

“I should be the one asking you that. You’re
the one who got yourself there.”

The headlines read, ‘Crawford Brothers’ New
Mystery Girl’. It was only a matter of time before they found out
who I was, judging by how clear my face was on the page. The
photographer shot a picture of us when we were inside a car, one of
my arms wrapped around Ryan as I kissed him, tongue and
all.

We Are Here by Cat Thao Nguyen
I See You by Ker Dukey, D.H. Sidebottom
When the Bough Breaks by Jonathan Kellerman
Submissive Seductions by Christine D'Abo
The Day of the Iguana by Henry Winkler
Duke of Deception by Geoffrey Wolff
Longarm on the Santee Killing Grounds by Tabor Evans
Max Lucado by Facing Your Giants
The Madness Underneath: Book 2 (THE SHADES OF LONDON) by Johnson, Maureen
Rose in Bloom by Helen Hardt
Our partner