A Fear of Dark Water 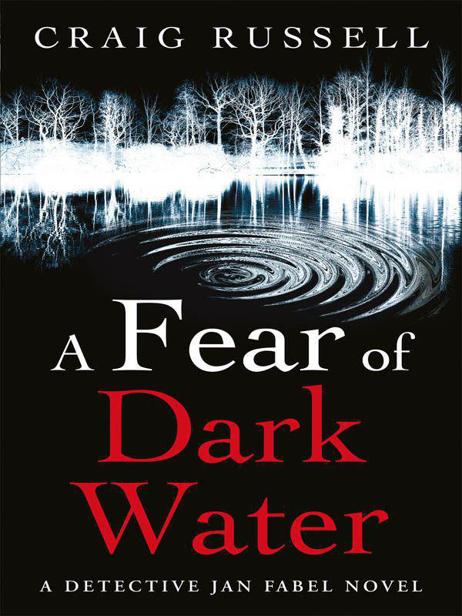 Jan Fabel returns to the Hamburg murder squad to track down a horrifying killer.

Just as a major environmental summit is about to start in Hamburg, a massive storm hits the city. When the flood waters recede, a headless torso is found washed up.

Initially, Jan Fabel of the Murder Commission fears it may be another victim of a serial rapist and murderer who stalks his victims through internet social network sites, then dumps their bodies in waterways around the city.

But the truth of the situation is far more complex and even more sinister. Fabel’s investigations lead him to a secretive environmental Doomsday cult called ‘Pharos’, the brainchild of a reclusive, crippled billionaire, Dominik Korn.

Fabel’s skills as a policeman are tested to their utmost as he finds himself drawn into an unfamiliar, high tech world of cyberspace, where anyone can be anybody or anything they want. And he quickly realises that he is no longer the hunter, but the hunted.

Craig Russell was born in 1956 in Fife, Scotland. He served as a police officer and worked in the advertising industry as a copywriter and creative director. In 2007, his second novel,
Brother Grimm
, was shortlisted for the CWA Duncan Lawrie Dagger, and in the same year he was presented with a
Polizeistern
(Police Star) award by the Polizei Hamburg for raising public awareness of the work of the Hamburg police.

For more information about Craig Russell and his books, please visit
www.craigrussell.com

A Fear of Dark Water

For Jonathan and Sophie

And the sea gave up the dead which were in it

Thalassophobia is a fear of large and deep bodies of dark water, such as seas or lakes, where the bottom cannot be seen. As a specific phobia, it is not related to aquaphobia or other water phobias but is more akin to agoraphobic conditions
.

It is not a fear of water itself. It is a fear of the void: of what lies beneath the surface
.

The Klabautermann is a traditional figure in the superstitions of Northern German seafarers
.

There were two views of the Klabautermann: one as a friendly, helpful sea-elf who helped repair leaking ships or guide them to safe waters; the other as a malevolent demon who played cruel tricks on sailors and guided ships to their doom. One thing was common to both versions: that the Klabautermann was invisible to almost everyone
.

If you did manage to catch sight of the Klabautermann, it meant only one thing: that you were going to die
.

Fifteen Years before the Storm

Korn hit the
Pharos One
comms link again. He heard Wiegand’s voice but the transmission was breaking up. No crackle or hiss: the digital communications system had no degrees of function; the signal was either there or it was not. Wiegand’s anxiety came to Korn in severed syllables and silences. Shards of words. Sharp-edged.

Beneath him the trench. Around him the water: chill, dense, crushing. Black.

It was a different universe. A different reality.

Pharos One
had travelled the shortest of distances. A journey of three and a half kilometres. On land, you could walk it comfortably in three-quarters of an hour. Yet Korn was now in a place as remote to mankind as space. As the moon.

Now Korn was on the edge of the abyss. Literally. This was where the abyssopelagic zone began. The water outside was now beyond any normal understanding of the concepts of water, of a liquid. This was deep in the aphotic layers of the ocean, where all life was blind in a lightless universe. The readings showed that the water temperature outside was near freezing, yet it remained fluid because of its intense salinity. It was a liquid, yet had an unimaginable, crushing density. Korn knew that already the pressure was four hundred times that of the atmosphere at sea level, and it increased by one atmosphere for every ten metres that the
Pharos One
submersible sank.

‘I’ve lost control,’ he shouted into the comms. ‘The control desk is completely dead. You have to try to bring me up remotely …’

More sharp shards of speech came through the comms. Korn knew that that was how he would have sounded to the mother ship on the surface. If basic communications were not working, then there was no chance of them establishing a reliable remote-control link. And, even if they could link in, there was no guarantee that whatever system failure had robbed him of control had not also severed the link with the remote-navigation computer.

Another shatter of syllables.

Korn didn’t attempt to answer. He tried to think. Or more accurately he tried to slow his brain, to clear it of panic, so that he
could
think. Why had
Pharos One’
s main motors cut? Why had he no control from the helm? And why had the submersible experienced such a catastrophic loss of buoyancy? It was as if the whole system had collapsed. He was sure that the engines were okay, the steering gear. It was an electronic fault, rather than mechanical. Why didn’t he know? He had helped to design the
Pharos One
; planned its electronic management himself; designed fail-safe systems with Wiegand. How had this happened?

And having helped design the
Pharos One
, Korn knew that, unlike a bathyscaphe, it did not have ultimate buoyancy. Its mix of gasoline and electromagnet-capture ballast was limited. Korn had insisted on a submersible capable of reaching significant depth, but which could ‘fly’ through its environment. Without motive power its weight would, ultimately, sink it.

Korn stared out through fused quartz into the dark water, the beams of the iodine floodlights picking out an upward snowstorm of particles. Then something pale was caught in the external navigation lights. An intricate basket star, like a lost lace doily, drifted up and past the window; the only life he could see. If you could call it life. Bloodless, capable of regenerating parts of itself, even of reproducing a complete new creature from a lost tentacle. A being with a sixty-five-million-year-old pedigree.

I should not be here. The thought hit Korn as he watched the basket star drift up and out of sight. Not a passing thought; a revelation. A rejection of years of study; of millions in investment. Of a lifetime’s devotion. I should not be here. Suddenly it struck Korn that his presence in this place was as preposterous as the basket star he had just sunk past exploring the heights of Mount Everest. I have no right to be here. This is not our world. He thought of the time, the effort, the money he had poured into the Pharos Project. Millions.

Void
. Korn heard Wiegand’s one complete word before the comms went completely dead. Void. Void what? It was a word well suited to the black, crushing emptiness around him. But Wiegand had been trying to tell him something. Korn tried to raise the mother ship again, but there was no response. He hit the main motor control. Nothing. The desk was still dead. I am going to die here, he thought. I’m going to die and no one will ever find my body and I deserve it because I should not be here.

It was a low, rumbling groan, like a sea creature moaning in the abyss. But Korn knew it was the ribs of the pressure hull protesting. He looked desperately around the cabin; at the tightly, claustrophobically confined space of reinforced steel that surrounded him; at the thick quartz of the portholes. Maybe it would be quick. He had imagined himself coming to rest at the bottom of the trench, trapped and motionless, going claustrophobically insane as he waited for the one hundred hours of oxygen to run out. Screaming and clawing. But he realised that the
Pharos One
would soon exceed its safe operating parameters. Maybe it would be a rivet that would kill him; fired, bullet-like, from its socket by the intense pressure of crushing water. Or maybe, and more likely, he would be squeezed to death, like a bug between fingers, by the implosion of steel as the hull yielded.