Read A History of the Crusades-Vol 1 Online

A History of the Crusades-Vol 1 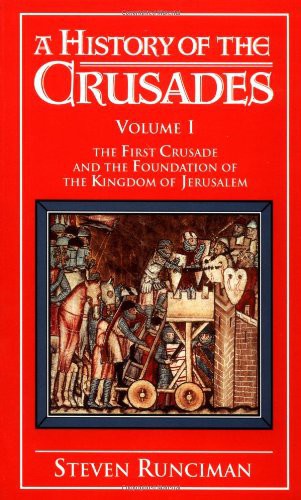 Published
by the Press Syndicate of the University of Cambridge

Printed
in the United States of America

Paperback
editions for sale in USA only

THE HOLY PLACES
OF CHRISTENDOM

THE PREACHING OF
THE CRUSADE

THE JOURNEY TO
THE WARS

THE WAR AGAINST
THE TURKS

Appendix
II
The
Numerical Strength of the Crusaders

I           A
pilgrim of the late eleventh century Reproduced from
Les Fresques de Tavant
by permission of Les Editions du Chene, Paris)

VIII     The
mouth of the Dog River (From
Syria, Illustrated)

This book is intended to be the first volume of
three, to cover the history of the movement that we call the Crusades, from its
birth in the eleventh century to its decline in the fourteenth, and of the
states that it created in the Holy Land and in neighbouring countries. I hope
in a second volume to give a history and description of the kingdom of
Jerusalem and its relations with the peoples of the Near East, and of the
Crusades of the twelfth century, and in a third a history of the kingdom of
Acre and the later Crusades.

Whether we regard them as the most tremendous
and most romantic of Christian adventures or as the last of the barbarian
invasions, the Crusades form a central fact in medieval history. Before their
inception the centre of our civilization was placed in Byzantium and in the
lands of the Arab Caliphate. Before they faded out the hegemony in civilization
had passed to western Europe. Out of this transference modern history was born;
but to understand it we must understand not only the circumstances in western
Europe that led to the Crusading impulse but, perhaps still more, the
circumstances in the East that gave to the Crusaders their opportunity and
shaped their progress and their withdrawal. Our glance must move from the
Atlantic to Mongolia. To tell the story from the point of view of the Franks
alone or of the Arabs alone or even of its chief victims, the Christians of the
East, is to miss its significance. For, as Gibbon saw, it was the story of the
World’s Debate.

The whole story has not often been told in
English; nor has there ever been in this country an active school of Crusading
historiography. Gibbon’s chapters in the
Decline and Fall
still, despite
his prejudices and the date at which he wrote, well deserve study. More
recently we have Sir Ernest Barker’s brilliant summary of the movement, first
published in the
Encyclopaedia Britannica
, and W. B. Stevenson’s short
but admirable history of the Crusading kingdoms. But the British contribution
consists mainly in learned articles, in the edition of oriental sources and in
a few unscholarly histories. France and Germany have a larger and longer
tradition. The great German histories of the Crusades begin with Wilken’s,
published early in the nineteenth century. Von Sybel’s history, first published
in 1841, is still of prime importance; and later in the century two fine
scholars, Rohricht and Hagenmeyer, not only did invaluable work in the
collection and criticism of source-material but themselves wrote comprehensive
histories. Of recent years the German tradition has been maintained by Erdmann
in his exhaustive study of the religious movements in the West that led to the
Crusades. In France, the land from which the greater number of the Crusaders
originally came, the interest of scholars was shown by the publication in the
middle of the nineteenth century of the main sources, western, Greek and
oriental, in the huge
Recueil des Historiens des Croisades.
Michaud’s
vast history had already appeared in the years following 1817. Later in the
century Riant and his collaborators in the
Societe de l’Orient Latin
produced much valuable work. In this century two distinguished French
Byzantinists, Chalandon and Brehier, turned their attention to the Crusades;
and shortly before the war of 1939 M. Grousset produced his three-volume
history of the Crusades, which, in the French tradition, combines wide learning
with good writing and a touch of Gallic patriotism. Now, however, it is in the
United States that the most active school of Crusading historians can be found,
created by D. C. Munro, whose regrettably small literary output belied his
importance as a teacher. The American historians have hitherto concentrated on
detailed aspects, and none of them has yet attempted a full general history.
But they have promised us a composite volume, in which some foreign scholars
will join, to cover the whole range of Crusading history. I regret that it has
not appeared in time for me to profit by it when writing this volume.

It may seem unwise for one British pen to
compete with the massed typewriters of the United States. But in fact there is
no competition. A single author cannot speak with the high authority of a panel
of experts, but he may succeed in giving to his work an integrated and even an
epical quality that no composite volume can achieve. Homer as well as Herodotus
was a Father of History, as Gibbon, the greatest of our historians, was aware;
and it is difficult, in spite of certain critics, to believe that Homer was a
panel. History-writing to-day has passed into an Alexandrian age, where criticism
has overpowered creation. Faced by the mountainous heap of the minutiae of
knowledge and awed by the watchful severity of his colleagues, the modem
historian too often takes refuge in learned articles or narrowly specialized
dissertations, small fortresses that are easy to defend from attack. His work
can be of the highest value; but it is not an end in itself. I believe that the
supreme duty of the historian is to write history, that is to say, to attempt
to record in one sweeping sequence the greater events and movements that have
swayed the destinies of man. The writer rash enough to make the attempt should
not be criticized for his ambition, however much he may deserve censure for the
inadequacy of his equipment or the inanity of his results.

I give in my notes the authority for the
statements that I make and in my bibliography a list of the works that I have
consulted. To many of them my debt is enormous, even if I do not specifically
quote them in my notes. The friends who have given me helpful criticism and
advice are too numerous to be recorded by name.

A note is needed about the transliteration of
names. Where Christian names occur that have an accepted English form, such as
John or Godfrey or Raymond, it would be pedantic to use any other form; and I
have always tried to use the form most familiar and therefore most acceptable
to the average English reader. For Greek words I have used the traditional
Latin transliteration, which alone allows for uniformity. Arabic names present
a greater difficulty. The dots and rough breathings enjoined by specialists in
Arabic make difficult reading. I have omitted them, but hope that my system is
nevertheless clear. In Armenian, where
k
and
g,
and
b
and
p,
arc alternatively correct according to the period or the locality of the word,
I have kept to the more ancient equivalent. The French
de
presents a
permanent problem. Except where it can be regarded as part of a definite
surname, I have translated it.

In conclusion I should like to thank the
Syndics and the Secretary of the Cambridge University Press for their unfailing
kindness and help.

THE HOLY PLACES OF CHRISTENDOM

THE ABOMINATION
OF DESOLATION

‘
When ye
therefore shall see the abomination of desolation
,
spoken of by Daniel
the prophet, stand in the holy place’
ST MATTHEW XXIV, 15

On a February day in the year A.D. 638 the
Caliph Omar entered Jerusalem, riding upon a white camel. He was dressed in
worn, filthy robes, and the army that followed him was rough and unkempt; but
its discipline was perfect. At his side was the Patriarch Sophronius, as chief
magistrate of the surrendered city. Omar rode straight to the site of the
Temple of Solomon, whence his friend Mahomet had ascended into Heaven. Watching
him stand there, the Patriarch remembered the words of Christ and murmured
through his tears: ‘Behold the abomination of desolation, spoken of by Daniel
the prophet.’

Next, the Caliph asked to see the shrines of
the Christians. The Patriarch took him to the Church of the Holy Sepulchre and
showed him all that was there. While they were in the church the hour for
Moslem prayer approached. The Caliph asked where he could spread out his
prayer-rug. Sophronius begged him to stay where he was; but Omar went outside
to the porch of the Martyrion, for fear, he said, lest his zealous followers
might claim for Islam the place wherein he had prayed. And so indeed it was.
The porch was taken over by the Moslems, but the church remained as it had
been, the holiest sanctuary of Christendom.