Read A Kind of Loving Online

A Kind of Loving 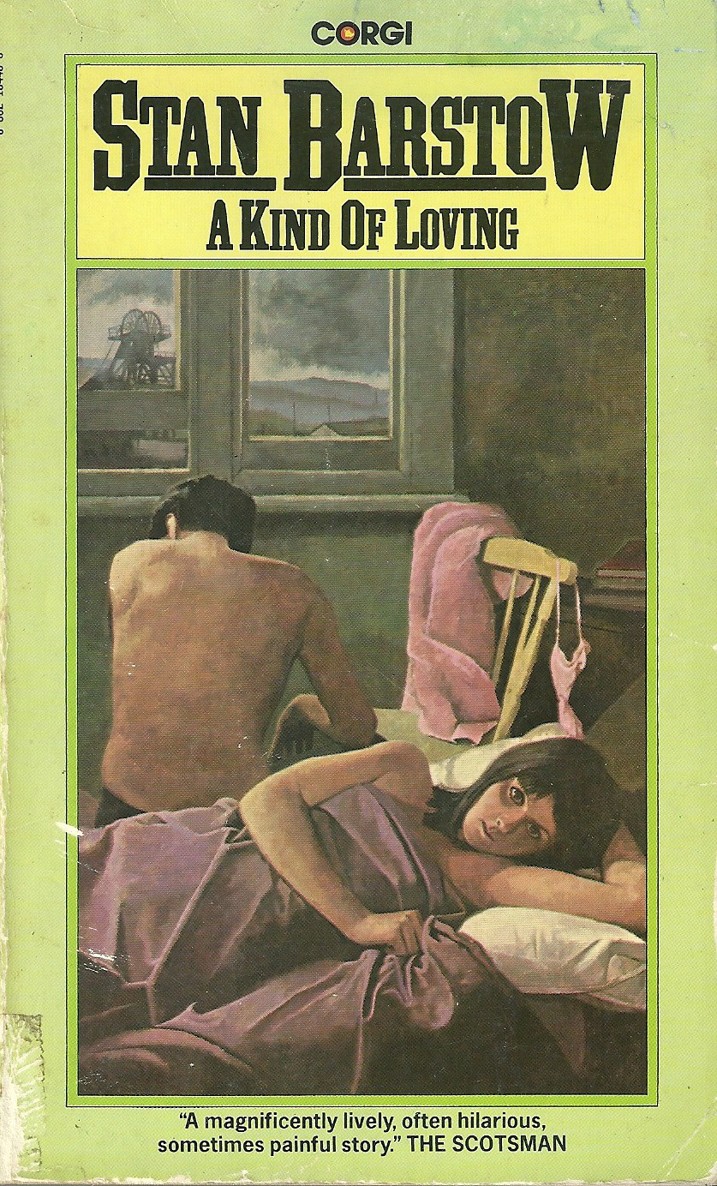 A Kind of Loving

But little do we perceive what solitude is, and
how far it extendeth. For a crowd is not
company, and faces are but a gallery of pictures,
and talk a tingling cymbal, where there is no
love.

A KIND OF LOVING

1: This book is sold subject to the condition that it shall
not, by way of trade
or otherwise,
be lent, re-sold, hired out or otherwise
circulated
without the publisher's prior consent in any form of binding or cover other than that in
which it is published
and without a similar condition
including this condition being imposed on the subsequent purchaser.

2:
This book is sold subject to the Standard Conditions of
Sale of Net Books and may not be re-sold in the U.K.
below the net price fixed by the publishers for the book.

Corgi Books are published by

Made and printed in Great Britain by

All the characters and incidents in this
story are imaginary and any similarity
between them and actual people and actual
incidents is unintentional and coincidental
.

it
really begins with the wedding - the Boxing Day Chris got married - because that was the day I decided to
do
something about Ingrid Rothwell besides gawp at her like a love-sick cow or something whenever she came in sight. I'd been doing this for about a month before Christmas, I remember. I don't know what started it. Does anybody know what starts these things, why a bint can be one among dozens about the place one day and somebody special the next? Or it seems that way. Well anyway, it was that way with me and I'd been at it for a month, or maybe six weeks, and I'd got to the stage where I knew I'd have to do something about it.

The wedding was about the only thing anybody had been
talking about at home for the last six months - ever since Chris
and David came right out into the open and bought the ring -
and I really thought that after all the talk and planning it would
have to be something out of the ordinary for it not to fall flat. But then I was a novice at this kind of thing. I'd never been
involved in a wedding before and I have to admit it's what you
might call an experience.

There's about five hundred people staying overnight before the
day, to begin with, and on the morning they're getting ready in lumps all over the place. The house is like a lot of backstage
dressing-rooms like you sometimes see in musical pictures and
you wouldn't be surprised to see some young lad marching round
knocking on all the doors and shouting, 'Five minutes, please,'
like they do. I think I've never seen so many strange faces and
the surprising thing is they're mostly relatives of mine. Or they're
supposed to be. I wonder where on earth the Old Lady's dug them all up from and I don't think even she knows them all for
sure. I know for a fact she realizes she's overdone it with the offers
of accommodation. And as for the Old Man, he said last night
that if he'd known he wouldn't be able to get up to bed for
people kipping down on the stairs he'd have put a bell-tent up on
the lawn.

He's lucky he could go to bed. I've spent the night on the front-
room sofa and the last four or five hours hanging about trying
to get into the bathroom. By the time I do manage to get in
there I'm feeling a bit sour at having all these people barging
about the place, and thinking about a couple of thousand more
that live in the town and have to be transported to the church.
Being in a bit of a flap I forget to shoot the bolt behind me and it
doesn't improve my temper when the door flies open and young Dorothy and Angela catch me without pants. This amuses them
no end and I wonder if I can't arrange to fall downstairs and
break a leg and give them a real laugh. A couple of proper
horrors, Dorothy and Angela, twins, belonging to Auntie Agnes,
one of my mother's sisters. I know the Old Lady can't abide them
and she only had Chris ask them to be bridesmaids because she didn't want to get across with Auntie Agnes who's one of them sensitive types who go through life looking for any offence left
lying about for the taking. I've only had one glimpse of Chris
as she nipped across the landing and from the tight little smile
she gives me when I make a crack that's supposed to be cheerful I guess she won't be sorry when it's ail over and she's with David
on the 3.45 to the Great Metropolis. It's even affected the Old
Man. I'm just about to go downstairs to get started when he calls
me into the bedroom and I find him standing in his undervest and trousers in front of the wardrobe mirror.

'Here, Vic,' he says; 'come an' tell me what you think to these new trousers.'

I sit down on the edge of the bed and look him over. 'Very
nice, Dad. They seem to hang all right. Can't really tell, o' course,
without your jacket on.'

He does this and then takes another look in the glass. He
begins to work his shoulders about as though the tailor's left
a few pins in.' Seems a bit on the slack side to me,' he says.

'Well that's the style now, Dad,' I tell him. 'You'll feel better
when you've got your shirt and waistcoat on. And I can't wait
while you do that,' I say, as he begins looking round for them.

He's a tall, spare sort of feller, the Old Man is, and really a suit hangs well on him when he lets it. This one's a dark blue,
nearly navy, with a faint double stripe in grey. 'I think he's made
a right good job of it.' I lean forward and finger the material. 'A
nice bit o' cloth an' all.'

' Oh, aye,' the Old Man says in that self-satisfied way he has
sometimes; 'you can't diddle me when it comes to pickin' cloth. I know a good length o' cloth when I see one ...' His voice tails
off. He's not at all happy this morning. 'It's t'makin' up 'at
worries me,' he says. 'I just don't feel right in it, somehow.'

'But he's one of the best tailors in Cressley, Dad. I wouldn't
have recommended him otherwise.' I get up off the bed. 'Look,
there's nowt wrong with my suit, is there?'

He eyes me over through the glass and says nothing. 'He
charges t'best prices, any road,' he says. 'He fair made me sweat
when he told me how much. I've never paid more na ten or
eleven pound for a suit afore.'

'That'll be a suit when you've forgotten how much you paid
for it,' I tell him. 'And that's looking a long time ahead.' I'm
a bit fed-up with this conversation because we've had most of
it out before.

'Happen so.' The Old Feller takes his jacket off again. 'All
t'same, I wish I'd gone to Liversidge's like I allus have afore.'

'Aagh! Mass production. They cut suits with a bacon slicer
there.' It's no use trying to do anything for the Old Man; you
might just as well let him go his own sweet way. He still thinks in terms of wages at three pound ten a week and suits fifty bob
apiece off the peg.

'Anyway,' I say, 'I'll have to be off.' And then just as I'm turning round to go out I catch sight of these brown shoes under a chair.

'You're not thinkin' o' wearing them today, are you?'

'That war a funeral,' he says.

'Well it applies to weddings an' all. You'll have our Chris curling up with shame. Remember there'll be a lot of eyes on you while you're up at the front.'

'They'll never notice me for our Christine.'

'Some of these folk here today make a point of noticing everything,'
I tell him. 'Not that three parts of 'em know any better anyway.'

'Oh, damnation,' he says, getting his rag out at last, 'Is'll
be glad when it's all over. I don't seem to be able to get owt right
some road.'

'An' you can't wear them brown 'uns. I'll ask me mother what
she thinks when I go down.'

This is the ace. The Old Man lifts his hand up. 'Ho'd on a
minute. There's no need to bring your mother into this: I'm
havin' enough trouble as it is.'

Just then I hear the Old Lady shouting from the bottom of the
stairs. 'Victor! Are y'there, Victor? The taxi's waiting. Hurry
yourself up or you'll have us all late.'

'She'll be bringing herself into it if I don't get a move on.' I start to go out again. 'Now just remember - no brown shoes.'
And I go out and leave the Old Man standing there staring into
the glass with a baffled look on his face.

'Come on, Victor, come on,' the Old Lady says. She's standing
at the bottom of the stairs like a battleship at anchor, big and
solid, with her hair, greying fast it is now, newly trimmed and
set. 'You know we've no time to spare.'

I
know we haven't because I've planned the calls. 'I was just
fixing me dad up.'

'There's plenty willin' to do that to get a presentable young chap with a steady job an' no bad habits.'

I cock a wary eye at her. Is she after marrying me off next?
The wedding bug must have bitten deeper than I thought. I
chuck her under the chin. 'What do you know about my bad
habits?'

I put my jacket down and straighten my tie. 'Well I'm ready. Where's our Jim?'

Sanctity by S. M. Bowles
The Dragon of Time: Gods and Dragons by Aaron Dennis
Afterlife by Paul Monette
Hell on the Prairie by Ford Fargo
Cowboy Take Me Away by Lorelei James
Deadly Spurs by Jana Leigh
Fatal by Arno Joubert
Bound to the Bounty Hunter by Hayson Manning
Magic Ponies: A Special Wish by Sue Bentley
The Centurion's Empire by Sean McMullen
Our partner