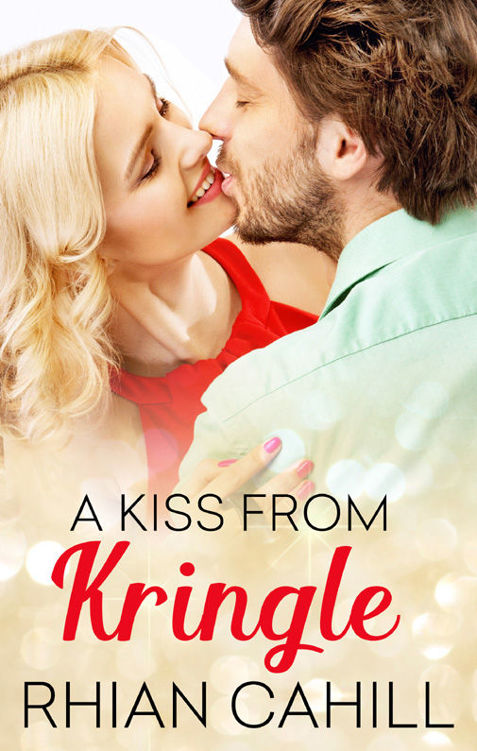 A Kiss From Kringle

A Kiss From Kringle
Rhian Cahill

For a man called Chris Kringle, Christmas is the most magical time of the year. But this year, there’s something about a certain elf that’s grabbed his attention in the best of ways.

Leah Ward didn’t start the day intending to be an elf in Santa’s Village, but to help her sister she’d do anything, including an impersonation and squeezing into a too-tight elf suit. But Leah didn’t count on the boss discovering her deception — or that he’d be enchanted by it. She certainly didn’t count on Chris deciding all his future kisses would belong to her.

A firm believer in Christmas magic, Chris knows the sparks that fly when he meets Leah are the once-in-a-lifetime kind, and he sees no point in wasting any time. All he has to do is convince a soft-hearted cynic that all magic is real — and that Christmas magic is the most powerful of all.

When not glued to the keyboard you’ll find her book in hand avoiding any and all housework as much as possible. For more on Rhian visit her website
www.rhiancahill.com
or you can contact her at
[email protected]
or connect on Twitter -
https://twitter.com/RhianCahill
or Facebook -
https://www.facebook.com/RhianCahillAuthor
or you can download Rhian’s free app from the iTunes or Google Play stores.

There are so many people involved in getting a book from my head onto the page and finally into the hands of readers. Too many to name and probably some I don’t even know the names of. Here are a few I can name. Mr.C, Sammi, Corki, Rob and Glenn. Without them putting up with being ignored I’d never get to do what I love.

This one is for my family. They support me even when I forget to feed them.

Chris leaned against the picket fence in front of Santa’s house and watched the families enjoying a chilly afternoon in the Village.

It didn’t matter how many hours of sleep he went without, the first day they opened the doors and invited the children inside the icy wonderland of Santa’s Village he knew the exhaustion was worth it.

Every year, Frosty’s Snowmen arrived with trucks full of equipment and spent three days — and nights — turning the arena into what was effectively a huge ice cave. If the walls were glass, it would look like a giant snow globe with the North Pole inside.

Elves with pointy ears and cheery smiles dressed in red, green and white. Mr and Mrs Claus in rockers on their porch listened to whispered wishes. Santa’s jolly laughter rang out to join the squeals of delight from children racing down the thirty-metre ice slide.

Magic shimmered in the air giving the impression anything was possible if you believed.

Chris was a believer.

Had been from the moment his father brought him to Santa’s Village when he was barely old enough to understand the visit. It had been his most anticipated day of the year — every year. Not even Christmas morning beat the first day in the Village.

And now it was his.

Well, his and Kandy’s and Jack’s. Before Jack’s return, it had been him and Kandy at the helm since their fathers’ decision to hand over Frosty’s Snowmen to the next generation. Not that he’d wanted it any other way. Unlike his childhood friend, Chris had never lost his love for all things Christmas.

Frost, Kringle and Cane hadn’t only built a profitable company — they’d built a legacy. One Chris was determined to keep going for generations to come.

His smile widened as he surveyed the streets and all the happy little faces running around.

From where he stood, he could see the line of children waiting for their turn on the slide. And one of their new employees supervising. He didn’t remember interviewing the woman and he was the one who employed staff. With the return of the prodigal son last year, he’d been able to surrender some duties to Jack, but Chris always dealt with hiring and firing.

He wouldn’t have forgotten hiring her.

Even separated by twenty or so metres, he felt the tug of attraction. Sitting across a desk from her in a confined space that wasn’t sub-zero temperatures and crowded with people would have done more than get his attention. It would have grabbed and squeezed.

He couldn’t decide if he should stay where he was or move closer. There were pros and cons to both actions.

“Hey, whatcha doin’?” Kandy slid her arm through his as she sidled up next to him. “Anyone up to mischief?”

Chris glanced down at her and arched an eyebrow.

She grinned. “Well, anybody other than you.”

He tipped his head in the direction of the slide. “New girl? What’s her deal?”

If anyone knew the gossip, it would be Kan. She had a way of ferreting out everyone’s secrets. But the creases in her forehead and downturned mouth said she didn’t know this one.

“You slipping?” he asked.

“No. I just have no idea who she is.” Kan raised her eyes to his. “I’ve never seen her… No, wait.” Her gaze swung back to the woman in question. “I think I can guess who she is.”

Her gloved hand covered his mouth. “Uh-uh. Watch your mouth.”

“How can we have someone working in the Village if neither of us knows who the hell she is?” Dear God. If Jack found out he’d flip. His friend may have given up practising as a lawyer, but there was no way Jack’s lawyer brain could be switched off. He’d be running through all the possible legal ramifications in seconds. “We have to get her out of here.”

“Wait.” Kandy wrapped her hands around his arm. “Let me talk to her first.”

“Why?” She knew something. He’d known Kan long enough to know when she was keeping something from him. He narrowed his eyes and gave her his most intimidating ‘tell me’ look.

Kandy sighed. “Fine. But let me explain before you go charging over there.”

He planted his feet shoulder-width apart, crossed his arms and waited.

She rolled her eyes at him. “Seriously? Jack is now Mr Easy-going-happy-dude and you’re Mr Grouchy-fun-police?”

“Kandy, we have someone posing as a staff member, in a place where every employee has to be run through the system and complete a Working With Children Check.”

“What do you mean who you think it is?”

“I don’t know her” — she waved her hand towards the slide — “But I know who’s supposed to be there. Haylee Ward.”

“And that’s not Haylee?”

“Her sister Leah. She looks different in the elf costume, but that’s who I think it is.”

“Yeah.” She sighed. “Leah came with Haylee to the interview. She stayed outside in the parking lot watching Haylee’s daughter, so I didn’t get a good look at her, but now I’m
really
looking I’m sure it’s her.”

“And now they’ve swapped places?” He felt his eyebrows shoot up his forehead. “Why the hell would one of them interview if it was the other who would work here?”

“I don’t think that’s it.” Kandy chewed her lip. “I should go over there and find out what’s going on. You’ll only cause a scene and, while Jack isn’t the grouchy-fun-police any more, this is not something we want to hit his radar.”

Chris grabbed her elbow and swung her around to face him. “I’ll go.”

“No. I’ll go.” He wanted to be the one to play this out with Leah-not-Haylee. As he rolled back through his memory, he remembered Haylee. She’d been eager for the chance to work in Santa’s Village. In fact, he recalled her saying she was enrolled to study childcare after the holidays and thought this job would be good experience. Surely their deception didn’t have malicious intent. And what did Kan say about the sister… “She’s a teacher?”

Leah smiled at the little girl waiting for her turn. “That’s a pretty dress.”

The blonde cutie did a twirl. “My Nanna made it.”

“Yes.” She glanced over her shoulder before frowning at Leah. “My Mummy said I shouldn’t go on the slide ’cause I might ruin my dress. But I
really
want to go on the slide.”

“Did she?” Leah looked up at the woman standing behind the girl. “Well if your Mummy says it’s okay, I’ll ride down with you in my lap so it doesn’t get ruined.”

“Sure. I’m about to go on my break, so I can take her down before I leave.” Leah got to her feet. “Ah, here comes my replacement now. Hi Sharon.”

“Hey. Busy as usual I see.” Sharon smiled at her.

“The line’s stayed the same all day.” Leah’s eyes trailed the long snake of waiting children.

“Yeah, it’s always like this,” Sharon said. “See you back here in fifteen.”

“Oh, I’m riding the slide with this little one first.” She placed a hand on the girls shoulder. “Looks like it’s our turn.”

“Thank you so much. Jessie would cry if she tore her dress and I’m afraid she’s going to on the ice,” Jessie’s mother said, a nervous frown on her face as she looked up to the top of the slide.

“No worries.” Leah snagged a mat and held out a gloved hand. “All right, Jessie. Let’s go.”

Guiding Jessie ahead of her on the stairs, Leah made sure the little girl didn’t trip on the hem of her dress or stumble on the steep climb.

When they got to the top, Leah placed the canvas mat down in one of the marked spots and positioned herself on it before holding her hand out to Jessie. “Ready?”

“Yes!” The little imp bounced a couple of times then stepped between Leah’s spread knees.

“Wiggle all the way back against me.” Leah helped Jessie sit snuggly in the V of her legs. “That’s it. Now hold on to my legs and I’ll wrap my arms around you.”

“I want to go fast.” Jessie turned her head to smile at Leah. “Please.”

She pushed off and the canvas slid over the ice with ease. They tipped off the launch platform onto the slope of the slide and away they went.

Cold air rushed over her cheeks and Leah grinned when Jessie let out a laughing squeal of pleasure. Holding on to the little girl, she concentrated on getting them to the bottom without tipping over. They zoomed over the thirty metres of ice so fast it took Leah’s breath. Gasping and laughing, they hit the level area at the bottom and their speed slowed.

The ten metres of horizontal surface reduced their momentum so they hit the padded barrier at the end with only a small jolt. Leah used her legs to cushion their impact further. As soon as they came to a stop, Jessie jumped to her feet.

The little girl’s glee brought a smile to Leah’s lips until she saw the man standing by the exit, a frown marring his mouth.
Oh shit!
She’d kept a low profile all day. No one had realised she wasn’t Haylee, but Leah recalled seeing this man briefly when her sister had her interview for the job.

It Runs in the Family by Frida Berrigan
The Girl You Left Behind by Jojo Moyes
Darling Jasmine by Bertrice Small
House of Wings by Betsy Byars
The Decent Proposal by Kemper Donovan
Country by Danielle Steel
The Sticky Cowgirl (Lone Star Sweets, Book 2) by Matthews, Lissa
Red Jade by Henry Chang
One Night (Friends #0.5) by Monica Murphy
The Guilty Wife by Sally Wentworth
Our partner