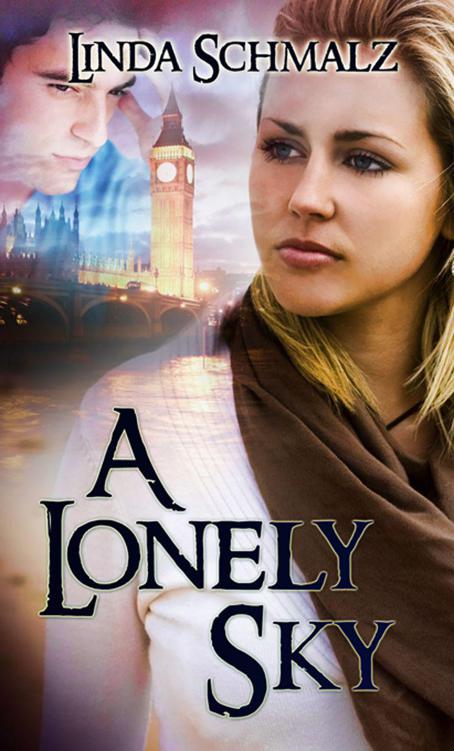 To my mother, Camille Siedelmann, and my dad in heaven, Ron Siedelmann, thanks always for your love and support.

To my loving husband, Dan. Thanks for your love, encouragement and patience as I pursue my dream and write my little heart out.

With special thanks to Sarah Bradley and Joan Bonazza who shared in my joys and frustrations while
A Lonely Sky
came to life. Thanks for the encouragement to go forth and write!

Julia Riley zipped her suitcase. The clock on her bedside table ticked off the minutes, adding annoyance to her growing frustration towards a tardy taxi. She sat on the edge of the bed, her eyes resting on the crucifix on the opposite wall. She held her gaze there for but a minute, contemplating for the umpteenth time her decision in leaving. Every second she stared at the cross, she felt certain this was the wrong choice. But the time had come for wrong choices.

She rose, gathered her belongings, and surveyed the room. The letter she left for John rested on his nightstand against their framed family portrait. She remembered the day they sat for that picture, how hurried and frantic they were to arrive at the studio on time. Elizabeth, tired from studying for high school finals, worried that her eyes looked puffy. Tommy, five years old and already a spitting image of John, had just rushed in from the backyard swing set, and Julia took too much time attempting to style her stubborn, stick-straight blonde hair. John seemed the only one relaxed that day. But that was John. Not too much rattled him.

Her eyes returned to the note.
That
would rattle him.

She averted her gaze again. If she stayed one moment longer in this room she might have a change of heart. She hurried downstairs, placed her bags by the front door and reached into the hall closet for her coat. Which to choose?  The weather here in Chicago promised snow and below average temperatures for November, yet England would be warmer but rainy.

The sound of a car pulling into her driveway left her little time for decision. She grabbed her gray trench coat, picked up her purse and opened the front door.

John stood there, key poised towards the door, his coveralls filthy with cement and soot. He seemed as surprised to see her as she was to see him. “Hey, hon. Why you so dressed up?”

“John.” She glanced over his shoulder to the street. No taxi, just John’s car. “What are you doing home?”

He laughed. “Nice to see you too, sweetheart. I decided to take the afternoon off. Make up for the overtime I put in last week at the construction site. I was going to call you, but thought I’d surprise you instead.”

Julia didn’t answer as she contemplated the surprise that awaited him.

“So you gonna move from the doorway and let me in?”

She opened the door, allowing him to enter. John pecked her cheek as he passed. She closed the door, rested her head against it and waited for the question she knew would come.

Julia turned and leaned against the door for support. “I left you a note upstairs, I-” She never expected to tell him this face to face.

John’s eyes grew wide as he glanced from Julia’s pained expression back to the luggage. He sat down on the second step of staircase, and put a hand to his forehead. “Oh Jesus, Jules. Someone die?”

“No.” She hated to let him sit there and guess what this was about, but words eluded her as to how to explain. “No one died.”

“That’s good, but-” John ran his hand through his thinning brown hair. A rare ray of early winter sunlight streamed through the staircase window, illuminating the wedding ring on his finger. Julia looked away.

“Then where you going?  You left me a note?” John continued the inquisition. Suddenly he laughed out loud, his eyes crinkling at the corners, his face ruddy with joviality. “Ah…you’re leaving me. It’s my lucky day!” He winked at her.

Julia shook her head and forced a smile. “No. You know I wouldn’t do that.”

“Then what’s this all about?” He began to untie the laces on his brown work boots, his head bent towards them.

Julia cleared her throat, finding it easier to talk to the top of his head than into those unsuspecting blue eyes.

“This trip came up very suddenly. I barely had time to get a flight. I-” There simply wasn’t a good way to explain. She fought the urge to run upstairs, grab the letter and fling it at him.

“You could have called my cell phone.” John gave up fidgeting with his bootlaces and concentrated on her instead. “Come on, what’s going on?”

Julia took a deep breath. “I didn’t call you because I didn’t want you to stop me from going.”

“I’ve never kept you from doing anything, Julia. Why would you think you couldn’t tell me if you wanted to go somewhere?”

She sat beside him on the stairs and took his hand. “Because it involves Sam.”

John removed his hand as his smile faded. “Sam Lyons?”

“I’m sorry, John. That came out wrong. I’m not thinking clearly.” She hated herself for the slip. “Of course you are. You’re the only father she’s known or will ever know.” She waited a moment before continuing, hoping her apology soothed his justifiable anger. “Sam suffered a heart attack during a performance on stage in London. He’s in critical condition. I heard it on the news early this morning.”

John remained silent. Julia hated his silence. He always spoke his mind whenever and wherever the need arose. His silence worried her more than any angry words ever could.

She fingered the gold chain and cross she wore around her neck. “Say something, John. I don’t want this to affect us. It’s why I wanted to leave a note instead of telling you.”

John stood and turned on her, his face red and his breathing, hard. “How considerate of you to leave me a note! What’s it say?  That you’re running off to England to be with your ex-lover who-”

The blare of a car horn startled them both.

“That’s probably my taxi for the airport.” She waited for his response, but none came. He wouldn’t even look at her.

“Sam’s sick, John. I may never see him again. I just can’t let him go without talking to him.”

Julia sighed. John couldn’t possibly understand why she needed to see Sam again. No one could. She had told no one the true reason, not even Elizabeth, who probably, more than anybody, should have been told. “John. He might be dying. I need to see him, to talk to him one more time.”

John let out a sarcastic laugh. “In the sixteen years since you met him, you’ve only talked to him once. Why do you think he’d want to see you now? This whim of yours is insane!”

Julia bit her lip. She’d let John have his say. After all, he had rescued her when she thought all was lost with Sam. But there was no way to tell John the truth about Sam without hurting him. And she would live her life to never hurt anyone again. The consequences were always too harsh.

Julia rose, and brushed invisible wrinkles from her silk blouse and linen skirt. What John didn’t know, that she had been with Sam five years earlier, she couldn’t tell him now.

The taxi’s horn blasted again. Julia went to the window and motioned to the driver that she’d be another moment.

She turned back to John. “You know, you’re right. I could get there and Sam might turn me away. This could be a wasted trip.”

“It will be.” John walked to the front door as if his five- foot-ten, slightly heavy frame might block her escape.

They stood in silence. Julia realized she had only one approach left, the one she tried to avoid by writing the letter- guilt. “I’ve never asked you for anything unreasonable, have I?”

“In the twenty years we’ve been married, I’ve never given you any reason to distrust me, have I?” How she hated asking him that. She imagined the fires of Hell stoked higher just for her.

“Then I’m asking you this one favor, this one thing, now. As much as you hate hearing it, Sam’s a part of my life, our life. If he’s dying, I would like the chance to say goodbye.”

He ignored her plea and walked back to the steps. He sat down, placing his head in his hands. After another long moment, he spoke, his voice resigned and sad. “Jesus, Jules. What do I tell the kids?”

Julia knew she won the battle but her heart held no joy. “Just tell them I went to visit a friend. I’ve lined up the sitter after school for Tom. I’ll be back as soon as I can. Four or five days, maybe. I still need to book a flight back.”

“It will be five of the longest days of my life.”

Julia walked over to the stairs. “I’ll call.” She held open her arms to give him a hug, but he sat motionless on the stair.

Julia turned for her luggage to avoid him seeing the tears that threatened.

His words unnerved her. She turned back, searching his eyes for a hint of malice, but found none.

Not waiting for her reply, John rose and picked up her luggage. “You better get going.” He handed her the bag, his hand brushing hers for a brief moment. “I’ll miss you.”

Julia felt at a loss for the right words. “I’ll miss you too,” spilled out automatically, but so much more could have tumbled from her heart.

She reached up and kissed his cheek. “Bye.”

She hurried out the door towards the cab. As the driver placed her luggage in the trunk, she glanced towards home. Her heart began to ache in a way she hadn’t allowed it to for years, but whether it longed for what she would leave behind or what she headed towards, she wasn’t sure.

“To the airport?” The taxi driver interrupted her thoughts.

As the cab drove away from her home, memories, long buried, flooded her. She was nineteen when she first traveled abroad.

Sixteen years ago she boarded a plane for Germany, but ended up in London and in love with Sam Lyons.

It was the beginning of the life she never expected.

“Kim, wake up. I see it. We’re almost there.” Julia nudged her friend as she looked out the airplane window.

Kim woke immediately. The excitement on the entire plane was contagious, and as the aircraft began its descent into Frankfurt, Germany, the voices of the other choir members escalated.

“I can’t believe we are finally here.” Kim leaned over Julia and gazed down on the sleeping city. She squeezed Julia’s arm. “Does that hurt?”

“Of course it does.” Julia laughed. “What are you doing?”

“Making sure this is all real.”

“You’re supposed to pinch yourself, nut.” She watched out the window as the plane dipped to the right and brought them closer to the city. She sighed with excitement and happiness. Julia had waited so long for this summer trip. The next two weeks promised fun filled days of touring, sightseeing and choral performances.

“Me too. ” Julia adjusted in her seat allowing her friend more window room. “But he couldn’t say no once that scholarship money came through for next fall. After all, my college fund money was money I earned and-”

“I know, I know. And now you can use it for the trip instead of college.”

“Okay, so I’m still a bit mad at my dad over the whole thing.”