A Long Way from Home 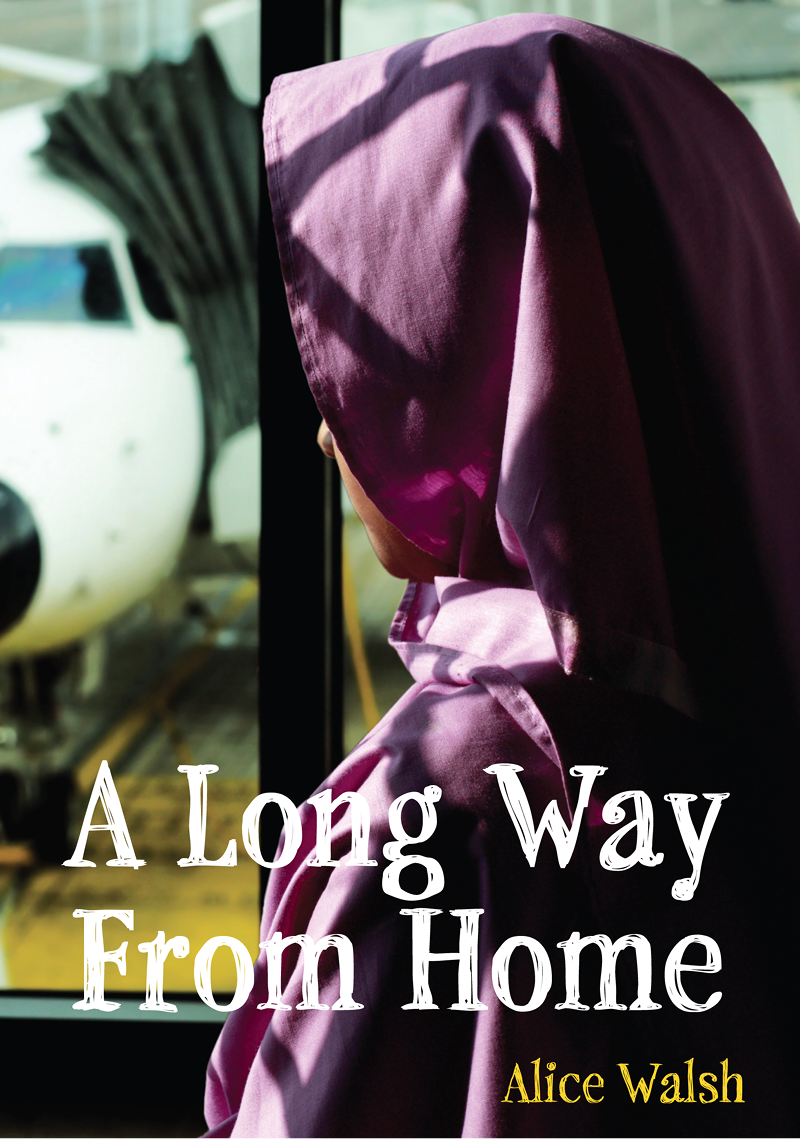 A Long Way From Home

A long way from home [electronic resource] / by Alice Walsh.

Rabia stared out the plane window, her stomach knotted in fear. They had been parked on the runway for hours, a long way from New York where the plane was supposed to land after leaving from London. She glanced at her nine-year-old brother, Karim, who sat perfectly still, his hands folded in his lap.

Mama was on the other side of Karim, her face creased into a worried frown. “What is wrong?” she whispered anxiously. “Why have they taken us to this place?”

“I don't know,” Rabia replied. But something
was
wrong. She could tell by the anxious faces of the passengers pacing the narrow aisle. Others sat perfectly still in their seats, fear etched on their faces. Through the window, Rabia could see people lining the fence around the airport. Once in a while, she caught a glimpse of men in dark uniforms with yellow stripes on the legs and arms. Their hats had a band of yellow as well. They were circling the plane with big dogs.

Rabia had picked up bits of information from the other passengers.
Hijack
was a word one man used. Father had once told her about people being taken hostage on airplanes. Sometimes the hostage takers threatened to kill the passengers if they didn't get what they wanted. Rabia shuddered and reached for Karim's hand.

She glanced across the aisle at the American boy who had boarded the plane with his mother when it stopped to refuel and pick up more passengers in London. His longish blond hair was cut like the actor in the movie
Titanic
. Colin, his mother had called him. For most of the trip he had either played with some kind of gadget or read a book. Now he was staring out the window, frowning. His mother had her face hidden in her hands as if she was in terrible pain.

“What do you suppose is happening?” Rabia heard the boy ask his mother.

She rubbed her temples, her face pale. “I don't know, Colin,” she said. Colin slumped down in his seat, and picked up the book he had been reading.

“Can I get you something?” A steward stood in the aisle, smiling at Rabia. With his dark skin and even white teeth, he reminded her of Amir.

Dear Amir
, Rabia thought, fighting back tears as she recalled the last day she'd spent with her older brother.

“I'm going to the market for ice cream,” Amir called. “Would anyone like to come with me?”

Rabia was sitting on the floor with Karim, trying to interest him in building a bridge with stones and blocks of wood. “Would you like to go with Amir?” she asked.

Karim looked at her, a blank stare on his face.

Rabia felt a stab of sadness. There was a time when her brother would have jumped at the chance to go for ice cream. But now Karim had lost interest in everything. Less than a year ago, he had watched as their oldest brother, Yousef, was killed. Since that day, he had not uttered a word.
Poor little brother,
Rabia thought. She could only imagine what he'd witnessed, and it tore at her heart.

Rabia took his hand and helped him to his feet. “I'm sure Karim would like to go with you, Amir.”

“Are you coming too, little sister?”

Rabia shook her head, although she wanted more than anything to get out of the house. “It's too hot,” she said. “I would suffocate under the
burqa
in this heat.” Besides, it was nearly impossible to eat ice cream inside a burqa. And she would have to stand outside the store or eat in a separate area apart from her brothers.

Amir squeezed her shoulder. “I will bring you back a treat,” he promised.

“How about you, Mama?” Amir asked, turning his attention to their mother, who was sitting quietly on
a mattress.

Mama shook her head. “Go and have fun, children.” She gave them a weak smile.

Rabia watched her brothers leave, feeling a twinge of envy. Boys had so much more freedom than girls. They could wander all over Kabul with heads, arms, and legs bare. Rabia spent days on end stranded at home with nothing to do. It had been six months since she'd started wearing the burqa. She hated it. Peering through the mesh of tiny holes across the front was like looking through the bars of a prison. The cap felt like a band of rubber squeezing her head, giving her dreadful headaches. The outfit covered her whole body, including her hands and feet. It was difficult to walk, and women often stumbled and fell. It was especially difficult for Rabia who had lost her foot to a landmine and had been fitted with a prosthesis. The artificial foot was poorly made in the first place, but now she had grown and it chaffed badly, making her leg sore. Still, she supposed she was lucky to have it. Many others who had suffered the same fate in Afghanistan had to manage with nothing.

Rabia pursed her lips. Why did the Taliban have so much hatred for girls and women? Why were they making their lives so difficult?

Crossing the room, she knelt to remove a loose floorboard. Beneath it were boxes filled with books, photographs, magazines, and CDs â things forbidden by the Taliban. Her family could be severely punished for possessing such things.

Rabia reached into one of the boxes and pulled out a delicate gold bracelet. It was a gift from Father on the day she was born, and it was her most cherished treasure.
To my Rabia on her birthday
was engraved on the inside. She fought back tears. It had been many months since Father was arrested, and his absence was an aching wound inside her. In many Afghan families the father doted on the sons. But there was no doubt that Rabia's father was proud of her.

Mama favored her sons, something Rabia knew but found hard to understand. She could do all the things her brothers did. Even with her artificial foot, she could play soccer and run fast. And she learned things much quicker than her brothers. Father often said she was like a sponge, soaking up information.

Father had taught her English and boasted about how easily she picked up the language. He knew there was no future for his children in Afghanistan. He wanted to prepare them should they have a chance to leave their country some day. Her brothers spoke the language haltingly, but to Rabia it came as naturally as breathing.

She dug into one of the boxes and found a large envelope crammed with photographs. Not so long ago, Mama had been the best portrait photographer in all of Kabul. She ran a studio that she was quite proud of. People came from all over the country to have their pictures taken.

Inside the envelope, Rabia found portraits of herself and her brothers when they were babies and pictures of Father when he was younger. There was a photo of Mama wearing a short skirt, her long hair hanging loose. In another, she was standing on the street wearing jeans and a short jacket. Rabia glanced quickly from the image of the young girl to the weary, broken-down woman seated before her. There were now lines in her face, and her hair was streaked with gray. Since Father's arrest and Yousef's death, Mama seemed to have no life left in her.

Rabia felt a rush of tenderness. Smiling, she held up the photograph. “Mama, you look beautiful,” she said. “And you are not wearing a veil or headdress.”

“Women won the right not to wear the veil back in 1964 â five years after the prime minister appeared in public with his wife and daughters unveiled.” Mama smiled ruefully. “Of course the religious leaders never accepted it. They protested just as they did years later when education for girls became legal.”

“Everything is so different now,” Rabia said in an attempt to keep their conversation going.

“Remember this one, Mama?” Rabia held up a picture of a sky filled with red, blue, orange, and green kites. “They look like bright colorful birds.”

A look of sorrow crossed Mama's face, but she remained silent.

Disappointed, Rabia put the photographs back in the envelope.

She never tired of hearing Mama's stories about days gone by. She had fond memories of visits to the Kabul museum that displayed art from ancient cities around the world. Mama remembered a time before the Soviet invasion, before civil war, before the Taliban and Al-Qaeda. That was before bombs destroyed the streets of Kabul. Before Yousef was killed. Before Fatherâ¦Rabia's eyes brimmed.
What have they done with you, Father?
She cried silently.
Are you wasting away in some Taliban prison? Do you even know that Yousef was killed by a rocket? We had to bury him without his arms.

Rabia swiped at her eyes with the heel of her palm. She missed the days when her family was together. The Sunday afternoons they drove to the countryside to visit relatives. Sometimes, they took trips to the Bamiyan Valley where the largest Buddha statues in the world were carved in the cliffs.

Those days are gone forever,
Rabia thought sadly. The Taliban had ruined everything. She was barely seven years old when they seized Kabul. Big bearded bullies in black turbans, their wild eyes darkened with kohl. She had just started her second year at school and was learning to write and add numbers. Her teacher read them books and encouraged them to make up stories. She loved that magical time in her life.

Under Taliban rule, schools for girls were closed. Rabia and Karim were warned not make noise, not even to laugh. They were forbidden to sing the songs they had learned in school. Dancing, music, soccer, even flying kites was forbidden. They had to hide all their books and get rid of their television set. Father was forced to grow a beard. The burqa became mandatory, and women began drifting through the streets like blue clones. They could not go out in public unless escorted by a
mabram
, a male relative.

At first, Mama tried to make light of it. “How do you like my new outfit?” she would ask Rabia and her brothers. But more than once Rabia heard her complaining to Father. “How can I go anywhere shrouded in this body bag?”

As months went by, Mama became depressed. Rabia hated seeing her so sad. After a while, she refused to go out at all. She had terrible headaches and her legs and feet ached from arthritis. It was difficult for Rabia to see her proud, strong mother reduced to a shell of a woman, afraid of her own shadow.

Clenching her fists, Rabia felt a surge of resentment toward the Taliban. They burned paintings, books, photographs, and film. Mama was forced to close down her studio â the studio she loved and worked so hard for. “Ignorant, uncultured, thugs,” she called them. “Art, music, and literature have always been a part of our rich heritage.” But the Taliban went right on destroying. They even blew the arms and legs off the Buddha statues that had stood in the Bamiyan Valley for hundreds of years.

The door burst open, rousing Rabia from her musings. Amir rushed into the house followed by Karim. She had only to look at Amir's face to know something was wrong.

Mama rose quickly from the mattress. “Amir?” she said, her voice filled with concern. “What is it? Tell me, son, what is wrong?”