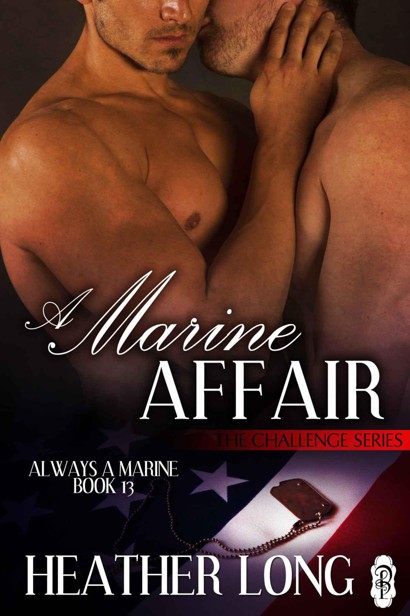 Home to Hellas by Stephanie Beck

Something to Howl About by Azura Ice

Mergers and Acquisitions by Sorcha Mowbray

Escape to My Arms by Heather Thurmeier

One Night with the Bride by Sara Daniel

The Midnight Masquerade by Monica Corwin

The Perfect Sub by Jayson Locke

The Governess and the Beast by Karyn Gerrard

What Part of Marine Don’t You Understand by Heather Long

Another Night, Another Planet by Jessica E. Subject

What Part of Marine Don’t You Understand?

For my Michael and twenty plus years of friendship.

Eli’s gut clenched. Rick stood on the far side of the baggage claim area, just beyond the glass separating customs from the outside world. A tidal wave of humanity flowed ahead of him, eager to stretch its legs after the seventeen-plus hour flight. The passengers greeted their loved ones with enthusiastic hugs or swift handshakes. Beyond the cheerful chaos, Rick waited, the throng parting briefly to reveal him before swallowing him up again.

Adjusting the grip on his bag, Eli shook his head. The man’s timing continued to suck on an epic scale. Rick McConnell was the last person he wanted to see. Not when Eli, agitated and impatient from the long flight, spoiled for a fight. He cut left, circling the crowd and heading for the exit. He’d take a taxi to his apartment. With five days until he needed to report, he planned to spend all but the last eight hours of it drinking. He’d earned it.

The doublewide glass doors swung open at his approach and Rick stepped right into his path.
Is it possible to be shocked and completely unsurprised at the same time?

“Rick.” Eli shifted his bag to the other shoulder and held out his right hand. He ignored the familiar zing when Rick clasped it. “Good to see you.” Enveloping the words in a cool impassivity, he focused on a point just to the right of Rick’s gorgeous eyes.

Sidestepping the masculine roadblock, he made it to the curb and held up a hand to summon a cab. Rick followed and climbed into the other side of the vehicle.

Son of a bitch
. Quashing the knee jerk reaction, Eli gave the driver his address and leaned back in the seat. Hot on the heels of his irritation with the man’s choice came a grudging admiration for his tactics. Unless he wanted a fistfight, they would share the cab.

“How was Africa?” Rick made no move to touch him, maintaining the perimeter.

“I can imagine. Training camps?”

“Yep.” He refused to have that conversation with Rick. He looked good. Rested. Tanned. Fit. His assignment to the Medical Center detail must be treating him well. Not that Eli had any intentions of asking him about it.

“How long until you have to report for reassignment?”

He should have rented a car. The cab was a hell of a lot more comfortable than the trucks he’d ridden through half of Africa in, too bad he couldn’t be back there at the moment,
sans
Rick. Far easier to put his lover out of his mind from eight thousand miles away.

Refusing to engage seemed to do the trick. Rick finally went quiet. Thirty-five strained minutes later, the cab driver swung into the tree-lined apartment complex where Eli had maintained a residence for nearly a decade. It didn’t matter where his assignments took him or for how many years—he liked his place. He kept his place.

Fortunately, he had a sister who managed it as a sublet for him after she’d moved out and closer to Washington, D.C.

Doubly fortunate for him that she’d just given birth to her fourth child and wouldn’t be anywhere near the Capitol. Without a word to Rick, he paid the cab driver and claimed his bag. Undeterred, the naval officer followed. Inside, the quiet rush of familiar surroundings and scents washed over Eli and he couldn’t ignore Rick anymore.

“What do you want, Rick?” He tossed his bag down and headed into the kitchen. A phone call three days before to a housekeeping service he employed while stateside had delivered groceries—including a case of beer. He didn’t offer Rick a bottle—he didn’t plan for him to stay.

“We need to have a conversation.”

Tossing the bottle cap into the trash, Eli snorted. “No. We don’t.”

“Yeah, we do. Like finishing a conversation you walked out of last year.” Resolute, Rick stripped off his jacket and hung it on the back of a chair. Dressed in civvies, he looked more like a power broker than a naval officer, if one didn’t notice his haircut, his ramrod straight posture, or the deep, stubborn set of his chin. Eli did his best to ignore it, draining half the beer in one, long, ice cold swallow. He looked at the note on the counter.

Mail service would be re-engaged the following day. His sister had made arrangements for his cable to be turned on the week before, as well as adding a note that he should call her as soon as he settled in. He’d spoken to her the day before, so she could wait.

The weight of Rick’s stare pressed in on him. “I was finished with it.”

“You really are a stubborn son of a bitch.” Apparently Rick’s patience had reached its limit.

“So I’ve been told.” Eli circled around him to sit on the sofa. He could take on the fight, go toe-to-toe with Rick, or he could take a break. He preferred the latter. It had been a hell of a long flight.

“That’s it? You give up on a decade just like that?” Rick pursued him into the living room. Somewhere between Eli leaving the kitchen and sitting, the man had helped himself to a beer. Dropping into the seat to his left, he set the bottle on the table and leaned forward. “I didn’t think you were such a coward.”

The corner of Eli’s eye ticked. Rick wielded words like a scalpel. A skilled surgeon, his ex-lover seemed determined to provoke a reaction.

“For someone who wants a conversation, you seem pretty focused on a fight.” First tactical rule of battle: respond with training, not emotion. He distanced his emotions from the conflict brewing between them.

Tipping the bottle back, he drained it and set it down on the table. “I said everything I had to say, Rick.”

“No, you didn’t. You said all of ten words, walked out, and boarded a flight for Djibouti. You hit it and quit it in the same breath.” The slivers of truth in the accusation stung.

“You chose the terms of that discussion.” Eli selected his words with care. “You decided it was an all-or-nothing conversation. Your needs.Your wants.Your ultimatum. Don’t cry to me because you didn’t like the answer.”
I need a shower
. Rising, he nodded to the door. “You can let yourself out.”

Not waiting for a response, he grabbed his bag and headed for the bedroom. A scald-his-skin hot shower was just what he needed. His chest hurt. Seeing Rick delivered a swift kick to the nut sack. They were used to long separations. Their relationship had thrived on weekend assignations and five minutes spent sharing coffee. They could pack a lot of living into those moments between deployments. Having Rick in the apartment—
stop drooling and shower
. His cock didn’t seem in the mood to listen to reason, semi-stiff since Eli glimpsed Rick, and it thudded against his belly.

Wanting the man he loved wasn’t a bad thing.

Unfortunately, Rick made having what they wanted impossible.

Rick rolled the bottle between his palms and stared at it. Eli’s dismissal cut right to the bone. The man knew exactly where to hit and when to maximize the pain.

Understatement of the year, Eli looked better than good. He’d always been fit and trim, but his year in Africa chiseled away any trace of softness. His tanned skin, crowned by a hint of sun-bleached blond in his normally sandy hair, and a shirt stretched too tightly across well-formed muscles—the desire to embrace him flared through Rick. Years of hit or miss assignations and weekend escapes made the time they spent together valuable, but the last separation hurt worse than the others had.

Hurt because he wasn’t sure of his reception. He’d debated whether ambushing him at the airport was a good idea, but after months of containing the urge to contact him, Rick couldn’t let him arrive home without some kind of greeting.

I shouldn’t have left the car at the airport
. But he couldn’t let Eli keep walking away from him. He screwed up, so he needed to fix it. The man had to talk to him first.

Either would provide him the opening he needed. His cellphone buzzed in his pocket and he stood to pull it out.

The hospital.
Shit
. If paged to come back in, he’d need his car.

“Commander, Lieutenant Shell is having difficulty breathing and complaining of pain.” His last patient from the day before, Shell was a prime candidate for a pulmonary embolism.

Secondary pneumonia was on the table. “Order a Spiral CT and V/Q scan stat, add a CBC and D-dimer. Page Kensington for a consult and follow-up.” Rick glanced at his watch. “Page me again if his temp doesn’t come down.”

“Yes, sir.” Webber hung up. The young physician was an excellent intern in the program.

The shower shut off. Carrying the beer into the kitchen, Rick emptied it into the sink and disposed of the bottle. If he had to go back to the hospital, better to not have any reactions dulled by alcohol.

Wanting something to do, he dug through the fridge and found sandwich fixings. Someone had stocked the kitchen for Eli—likely the housekeeping service he used. The man liked his apartment and it didn’t matter how often he deployed, he kept it up and paid a service to close it down and open it back up when he planned to return.

Over the years, Rick had scored an invitation to the sanctum sanctorum twice. But Eli kept his life neatly segregated. It made sense when outing either one of them could have cost their military careers, but the repeal of
Don’t Ask, Don’t Tell
gave them options. So why the hell couldn’t Eli see that?

Otherworldly Bad Boys: Three Complete Novels by V.J. Chambers
Emily's Penny Dreadful by Bill Nagelkerke
Rockoholic by Skuse, C. J.
Shuteye for the Timebroker by Paul Di Filippo
My Mrs. Brown by William Norwich
The Big Fear by Andrew Case
The Unnaturalists by Trent, Tiffany
The Fairest of Them All by Cathy Maxwell
The Avengers of Carrig by John Brunner
Irrefutable Proof: Mars Origin "I" Series Book II by Abby L. Vandiver
Our partner