Read A Most Lamentable Comedy Online 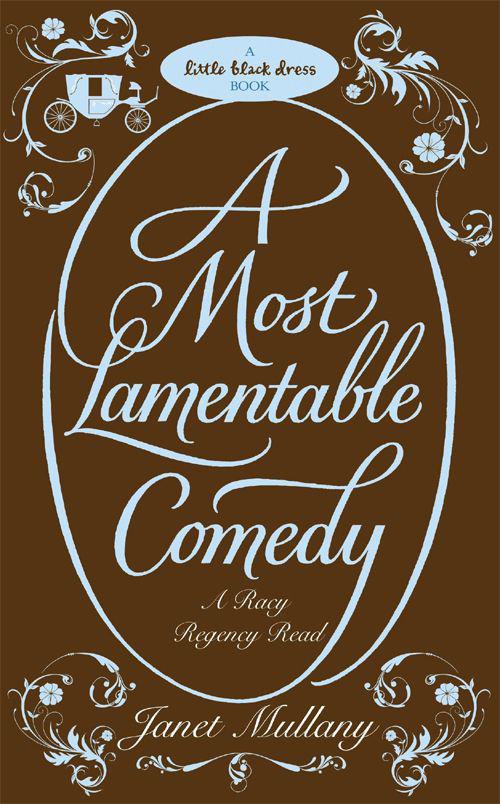 The right of Janet Mullany to be identified as the Author of the Work has been asserted by her in accordance with the Copyright, Designs and Patents Act 1988.

To Rosie Mullany, with love and admiration

The Rules of Gentility

Many thanks to a bunch of people, and my apologies if you should be mentioned here but aren’t: The design and editorial teams at Little Black Dress, in particular Catherine Cobain and Leah Woodburn; my agent, Lucienne Diver; Charles Dickens for the beginning of the beginning of the story; my brother Martin, who has the photograph to prove it, for the button-eating pig; Elena Greene for the dancing bear; ROMNA for the last-minute answers on the view from Hampstead Heath; the Risky Regencies and History Hoydens blogs; the ladies of the Beau Monde; Maryland Romance Writers; the Wet Noodle Posse; the Bad Girls Critique Group; the staff and volunteers at Riversdale House Museum; writing friends Anna Campbell, Julie Cohen, Kate Dolan, Colleen Gleason, Delle Jacobs, Christie Kelley, Kathy Love, Pam Rosenthal, Robin L. Rotham and Leanne Shawler; non-writing friends Gail, Lucy and Maureen; my daughter Alison (sorry, there’s sex in this one, but it’s mercifully fast); and my husband Steve, to whom I must offer apologies for the omission of the chapter where a huge structure is built and then exploded in slow motion and from many angles.

D
evil take it. I have seen this done a hundred times on the stage and read it a hundred more in novels, yet tying my sheets together proves almost impossible in real life.

‘Milady, they’ll break the door down,’ my maid whimpers.

‘Don’t be a fool. Here, put these on.’ I throw some petticoats at her. We have been unable to stuff all my possessions into my trunk and bags, and I am determined to leave nothing behind for that rapacious cow of a landlady to take. I wrench at the sheets and break a nail. ‘Oh, don’t stand there snivelling. Come and help me.’ /p>

Mary shuffles across the room, half in and half out of a petticoat.

Outside, the thunderous knocks on the door resume. ‘Open up, madam. We know you’re in there,’ bellows one of the seething mob of creditors. Heavens, it is like the French Revolution! How dare they!

‘I am unwell, sirs,’ I call in a quavering voice, tightening a monstrous knot that takes up half the length of the sheets.

‘She’s a dreadful liar and a whore to boot,’ says a female voice, that of my landlady, Mrs Dinsdale. I can imagine how she stands there, mottled arms cradling one of her infernal cats, snuff sprinkled over her shoulders and grubby shawl. My shawl, my precious blue Kashmir, that I gave her in lieu of rent, the dirty, fat, ungrateful thing.

‘Send your maid out, then.’ The door shudders under their blows, and the tallboy we have pulled in front of it shifts a little on the floor.

‘She is very poorly too, sir. Why, she is covered with stinking sores – oh horrors, I believe it is the smallpox.’

Is there a pause for reflection? If there is, it lasts but a few seconds. I loop the sheet around the bedpost, tie it in another hefty knot, and sling my rope out of the window. The trunk and bags follow. ‘Out!’ I hiss to Mary. ‘Oh, sir,’ I call out, ‘I am too ill to move. I beg of you, come back another day.’

‘Enough, Lady Elmhurst. We’ve had enough of your tricks and lies. Open the door, if you please.’

‘Sir, I cannot. Have pity on a poor widow.’ I shove Mary towards the window.

‘I can’t. I’m afraid of heights.’ She clings to me like a limpet.

I shake her off.

‘Would you rather I leave you here? Get down that rope, girl.’ I long to slap sense into her, but she is my only ally. I peer out of the window. There is a good six feet or so below the knotted sheets, but if she lands on one of the bags, she’ll have a good soft landing. ‘Come on, Mary. We’ll laugh about this later, I promise you. I’ll give you my blue-spotted muslin.’

‘Very well. And an inside seat in the coach.’

‘Yes, yes, but
go
.’ I shove her out of the window. ‘I fear I shall swoon,’ I add loudly, for the benefit of the creditors outside the door, hoping it explains the silence that results when we have flown the coop.

Mary’s face, like a piteous white flower in the dark, gazes up at me. Her mouth opens. If she is to scream, we are lost, and she seems set to dangle indefinitely in mid-air like some ridiculous spider. I look around the room for something to inspire her descent, and dart back to the window with it. She does scream a little as cold water hits her – doubtless she thinks it is the chamber pot, but even I am not so hardened – and then swears horribly as she lands. The china jug rolls from my hand as I fling myself on to the rope, there is a loud scraping sound as the bed moves, and I find myself catapulted on top of Mrs Dinsdale’s cabbages.

I scramble to my feet. It is raining, of course, and pitch dark, and Mary sobs as she gathers our bags. ‘I am giving notice, Lady Elmhurst.’

‘Very well, but I shall not pay you a penny.’

She mutters something under her breath, probably a prediction that she will not get paid anyway, and I am sorry to say it is all too likely.

If my hands were not full of my worldly goods, I swear I would box her ears, but she has stuck with me so far, and I need her help. ‘Come along. You’re a good, brave girl, and remember the blue-spotted muslin. It looks far better on you than it does on me.’

More whimpers from Mary as we haul our belongings through Mrs Dinsdale’s vegetable bed, have a brief fight with the laundry on the line and escape into the alley at the back of the lodging house. Stumbling in the dark, we make our way to the street, where I send Mary to find a hackney carriage – I am reluctant to show my face too near the lodgings, lest other creditors are on the prowl. My shoes are quite ruined – I have trodden in some most unpleasant substances – and, oh heavens, is that rustling sound a rat?

Just as I am about to give up on Mary and deciding which of my bags I should take, for I cannot carry them all myself, a hackney carriage draws up. The driver and I have an acrimonious exchange about the justice of extra charges for the luggage. I am happy to say I win, but then Mary and I must load all the things ourselves, while he snickers and makes comments about bedraggled slatterns. And indeed, from Mary’s appearance, that is what we probably both look like. I treat his comments with the contempt they deserve, and we set off, finally, for the early-morning coach that will take us out of London and away from my creditors.

There, another unpleasant surprise awaits. As we are so late, there are only two seats left, but only one of them is inside.

‘You promised,’ Mary says, and there is mutiny in her voice.

‘So I did. Come, fair’s fair. We’ll cut for the inside seat.’ I pull my pack of cards from the capacious reticule with which I travel. ‘High I go inside, low you go outside.’

She cuts a king, and cackles with glee as I pull a four. ‘High I go inside, low you go outside,’ I repeat, and push her towards the coach as she opens her mouth to howl protest. ‘And if you don’t keep quiet, I’ll tell everyone you stole my petticoats – why else would you be wearing four?’

I help her on to the roof of the coach with a vigorous shove to the arse, hand her the umbrella (I am not totally without feelings) and settle myself inside, opening the book of sermons I carry to repel male attenti.

Oh, that I have come to such a pass. I, that diamond of the first water, the former Miss Caroline Duncan, the catch of the season only seven short years ago, and now . . . twice widowed, down on my luck, forced to fight off unkind creditors; and it is true, I did allow the gallant Colonel Rotherhithe to assist in the payment of the rent. He was so very insistent. He even offered to pay my milliner, although I found out later he had not. But then I have always been gracious enough to accept gifts from admirers; why, even Mr Linsley, the gentleman with whom I had a brief
affaire de coeur
before I succumbed to Elmhurst, brought me a basket of mushrooms from the country. I remember their earthy scent and rich, meaty lobes and my stomach growls louder than the carriage rattling over the cobbles.

As for Elmhurst, God damn him and rot him in hell for squandering the money I inherited from dear Bludge, and for dying in such an unnecessary and absurd way, and what a fool I was to love him so. I miss Elmhurst quite dreadfully despite his faults. How degrading it was to have his brother snatch back the family diamonds and sapphires before I could sell them. It is true, though, that his family never liked me, and said very unpleasant things in my hearing about women of little breeding (meaning me) marrying rich gentlemen with one foot in the grave (meaning my first husband, Viscount Bludge, who was indeed several decades older than me).