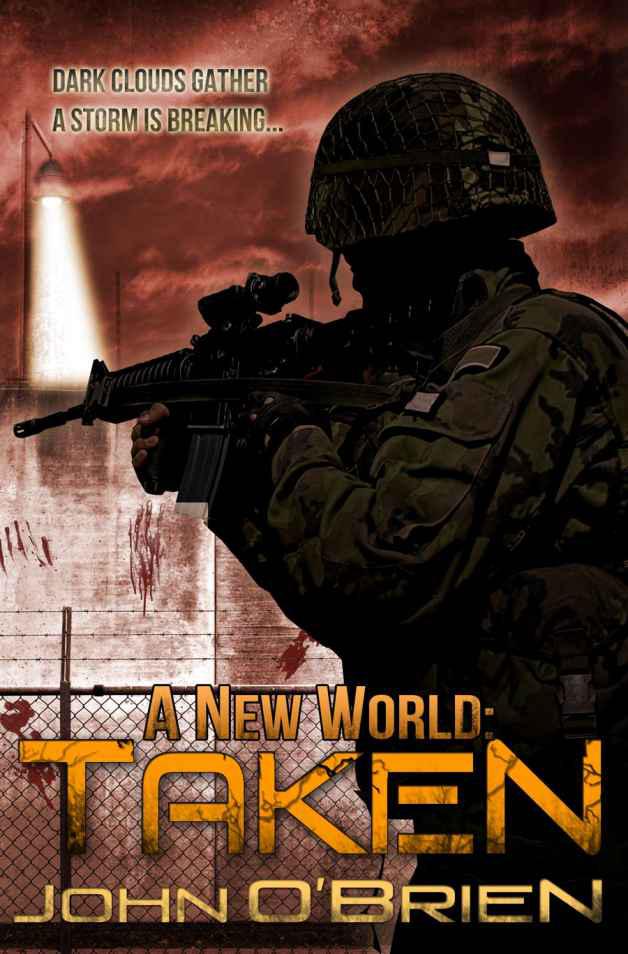 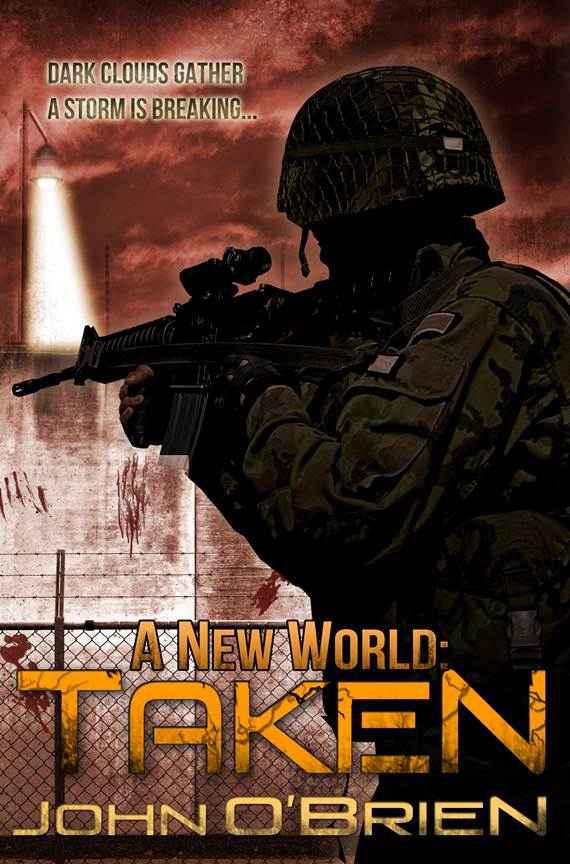 A Novel by John O’Brien

No part of this book may be reproduced in any form, except for the inclusion of brief quotations in review, without permission in writing from the author.

This book is dedicated to my grandparents, William Nelson Park, Sr. and Doris Park.

You taught me so much and for that I am grateful.

Poppa, you taught me the outdoors and the love for wildlife.

Noni, you taught me patience and unconditional love.

May the both of you rest in peace.

The New World series is a fictional work.

While some of the locations in the series describe actual locations, this is intended only to lend an authentic theme. Any resemblance to actual events or persons, living or dead, is purely coincidental.

I wrote this series with one thought in mind – What would I actually do in the event of an apocalyptic event?

This story and series being true to actual skills and experiences I possess.

No super heroes or someone possessing miraculous abilities, just a normal person seeking to survive in a post-apocalyptic world.

Being an ex-Air Force pilot and operating in the special operations arena, the experiences I have gathered lend themselves well to surviving in a world such as I have presented, those skills being advantageous in certain aspects of survival.

Written in the first person, it takes you through an accounting of what that world and survival might look like through the eyes of someone being suddenly thrust into a situation that looks normal from first glance, with regards to the physical environment, but with a terror lurking underneath and survival in question at every turn.

Imagine yourself looking out of your window and everything looks the same; buildings stand tall and straight reflecting sunlight from their exteriors; trees sway in the morning breeze, cars sit silently in parking lots; a bright, blue sky looks down and the air is clear of smoke from burning fires.

All normal with the exception of one simple but huge difference, there is nobody around.

The plausibility of the scenario and premise make this a truly unique story and interesting read.

I truly hope you enjoy reading it as much as I enjoyed writing it!

This story rather took off on its own.

The central aspect of this book was only supposed to encompass about a fifth of the pages but it launched itself into being the core of the entire book.

This story seems to do that.

I plot out the story line and begin typing.

The story then weaves and turns as it will without my seeming to have any say in the matter.

To that extent, the story line that was supposed to be in this book will now be in the next – hopefully.

It changed so much that I had to rename this book to ‘Taken.’

‘Awakening’ will now have to be the fifth book.

Yes, there’s a spoiler for you.

There will be another coming.

As usual with all of the books, I would first like to thank my mother, June O’Brien for the many hours she has spent editing.

This is besides finishing the first book of her series, ‘The Blue Child Series.’

I encourage you to take a look at the first book in her series, ‘On the Mountain.’

It is sincerely a great read for science fiction and fantasy readers.

And then there is once again my son, William, who helps through tough places in the overall plot line!

I want to give a very warm thanks to the review group.

Your insights and catching the things I missed, and there were a number of them, was a huge help.

Thank you for all of your wonderful ideas and chats.

I have to throw Jay Dixon in this mix.

No, you aren’t depicted as a love god in the books nor is there a special needs helper.

But your insights into how to make the books better and your ideas are priceless.

A big thank you to SM
Reine
for putting up with me through the cover art design.

I’m a pain and fully realize that.

There are many iterations tossed back and forth and then you bring out your wand and weave your magic.

The result is truly incredible and I thank you for your time and effort.

I am truly appreciative of all of the messages and mentions.

I enjoy each and every one of them and would like to thank you all for writing.

I enjoy the chats and messages we pass back and forth and it makes my day to receive them.

I hope this book is as enjoyable to you as the previous ones were.

This is a cliché but so true, I write this story for the readers.

If it wasn’t for you, this story wouldn’t be what it is.

Okay, enough of my ramblings.

On with the story!

Rising later than usual, Gonzalez finishes her shower and heads outside.

The sun has risen above the mountains to the east and rains warmth down on her shoulders as she steps out from under the building entrance overhang.

For the first time in many days, which seems like weeks or months considering the trials and stresses the change in the world has brought about, she feels a semblance of peace within.

The sun shining upon her adds to the calm feeling.

With the wall being finished yesterday, the thought arises that they will have a better chance at surviving in this new world.

She lifts her face to the sun in gratitude for its blessing; its cascade of beams fills her.

Her thoughts turn to her family, her mother, father, and sister, and a knot tightens within.

She turns to the south, toward New Mexico, as if this will bring them closer and an answer as to whether they were able to survive the chaos.

They haven’t been far from her thoughts but the experience and events of the last months have driven them below the surface.

Now, with time and a semblance of security, those thoughts rise again to the surface.

With the immunity of the vaccine being hereditary, there is a chance her family is still alive.

She and the rest of Red Team, along with other soldiers, discussed this during the minimal downtimes they’ve had.

Thoughts rise as to whether she should ask for some time and a vehicle, now that this place has been secured, to travel and find an answer.

Maybe McCafferty will go with me since her family is in Texas
, she thinks continuing to look south.

She knows the question of families weighs on the minds of the other soldiers in their group; all of them want to at least know what happened.

With what she has seen so far, the chances are minimal that they are still alive but she, and the other soldiers, need to know for sure.

A voice behind her asks rather timidly bringing her back to the here and now.

Turning, she sees Robert with Michelle and Bri beside him.

She notices how similar to Jack both Robert and Bri are and how they’ve changed in the short time she’s known them.

For some reason, she has a special fondness for Bri.

Perhaps it’s the way Bri reminds her a little of her sister.

Or maybe the way she has taken to the training Sergeant Connell has been putting them through.

For whatever reason, the attachment is there.

She responds to Robert’s question.

“We were thinking about going down to the waterfront but my dad wants you to go along if we go,” Robert says.

Gonzalez detects a note of embarrassment.

Perhaps that his having to ask makes it seem like they need a babysitter.

She knows the feeling well as her dad was a little protective of her as well.

That’s one of the reasons she joined the Army to begin with; to show she can take care of and protect herself.

And, in the process, she found a second home.

“You know, I’ve been thinking on how to spend today and I’d love to go.

Thanks for asking,” she responds.

With a last thought of her family and a desire of finding out about them soon, she gives Bri a smile and follows them into Cabela’s.

Do you want to come along, Dad?”

“I’d really enjoy that but there are a lot of things to do around here yet.

You guys go have a good time,” Jack answers.

Gonzalez notices Jack nod to her wanting a private chat.

Stepping away from Robert, Michelle, and Bri, Jack tells her to keep an eye out; that if anything looks or feels wrong, to return immediately.

She knows Jack’s meaning with him having recently lost one of his daughters.

A tightness clenches her stomach with the responsibility.

She’s seen Robert in action more than once and is assured by his ability but she’s also seen that anything can happen at any time in this changed world.

“Yes, sir,” Gonzalez replies as they join Robert, Michelle, and Bri once again.

“Okay, Gonzalez here is in charge and what she says, goes,” Jack says.

Outside again, with soldiers taking in the sunny morning, Gonzalez, Robert, Michelle, and Bri angle towards the nearest Humvee parked in line with the rest of the vehicles; the sun bouncing brightly off its tan exterior.

The Dead Hand of History by Sally Spencer
Fifty Writers on Fifty Shades of Grey by Lori Perkins
Ambulance Girl by Jane Stern
Fear of Frying by Jill Churchill
Free Falling by Susan Kiernan-Lewis
Carpe Diem by Autumn Cornwell
Hiero the Tyrant and Other Treatises (Penguin Classics) by Xenophon
The Icarus Prediction: Betting it all has its price by RD Gupta
Strange and Lovely (Part 1) by Rachel Redd
Love Overrated by Latasia Nadia
Our partner