Read A Pact For Life Online

A Pact For Life 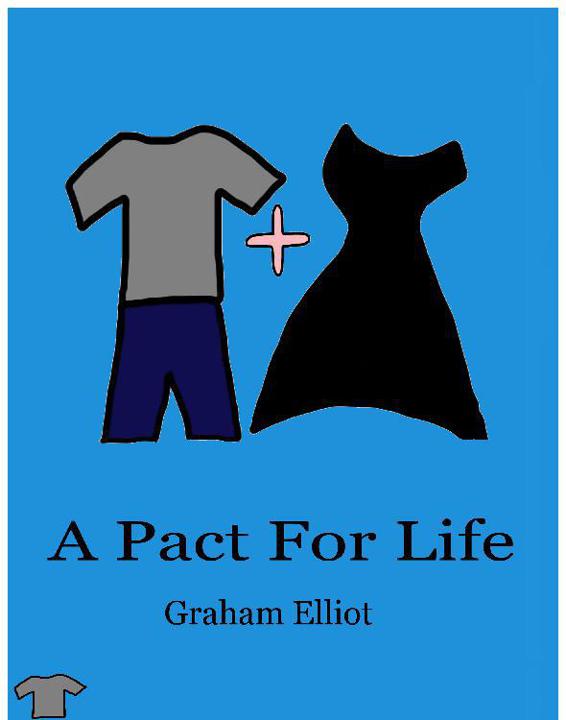 This book was influenced by

the music of The National.

And one specific lyric from Rilo Kiley

This novel is a work of fiction. Names, characters, places, and incidents either are the product of the author's imagination or are used fictitiously. Any resemblance to actual persons, living or dead, events, or locales is entirely coincidental.

No part of this book may be reproduced, scanned, or distributed in any printed or electronic form without permission. Please do not participate in or encourage piracy of copyrighted materials in violation of the author's rights
unless it's for a noble cause
. Purchase only authorized editions.

The GRAY SHIRT PRESS logo is a trademark of Gray Shirt Press, LLC.

BATTLING WITH A WHITE FLAG

A PACT FORMED BY THE STARS, THE MOON, AND THE DRINK

A TEST OF FAITH

A SERIES OF HAPPY MOMENTS

THE LIGHT AT THE END OF THE TUNNEL

A PLAN, WE MUST DEVISE

THE WAR ON CHRISTMAS

LIKE THE PENNY TRAY AT A GAS STATION, THIS WAS A SERIES OF GIVES AND TAKES INVOLVING UTTERLY MEANINGLESS ITEMS

THE THIRD LAW OF MOTION. i.e. EQUAL AND OPPOSITE REACTIONS

ALL'S RIGHT WITH THE WORLD

CALE DAWKINS VS. THE DIVINE

AN EPILOGUE OF SORTS

out of all the uppity gay men I know,

you're the only one who's actually a woman.

BATTLING WITH A WHITE FLAG

Things didn't begin with a bang per-se, but rather the dull thud of Cale Dawkin's head crashing onto the cold, wooden, bar floor. He had been tackled from his blindside, but it wasn't an ambush. To label it an ambush would imply he wasn't expecting the attack.

On the ground, Cale had no time to react as three men jumped on top of him and started to swing wildly. As he dodged their blows as best he could, two questions flashed in his mind:

The first question occurred when he looked over at the visibly distraught blond girl who served as the catalyst for the three men attacking Cale. The second question however stemmed much deeper than meaningless flirtation, blindsided tackles, and copious amounts of alcohol. Okay, maybe it had a little to do with alcohol.

Despite his best efforts at dodging, two punches landed successfully. They hurt like all holy hell, but when the third landed, it felt... alright. The pain was so focused and contained that it diminished all of the other problems in Cale's life.

Another punch arrived, and Cale welcomed it with an ambivalent grin that would've served as an unspoken, “fuck you” if the fight wasn't so chaotic and the bar so dark. This punch turned Cale's nose from a perfectly equal shape into what optimists would call a greater-than sign. However, to Cale, the distorted reflection in the metallic base of the bar stool looked nothing but lesser-than.

That punch would be the final attack as the pile of men grew lighter until Cale found himself alone on his back staring up at ever-dimming lights caused by an ever-swelling face.

He sat up and watched as his three attackers were carried away by bouncers who had the same disinterested look as those construction workers who hold the stop and slow signs. The most ravenous of the attackers, a man with spiky black hair and a tan more orange than bronze, shouted through the bouncer's grip, “I'll kill you if you even look at my fiancée again, motherfucker!”

Before Cale got the chance to antagonize him further, a Hispanic girl who looked like she lived without ever suppressing an emotion broke through the crowd and screamed, “Fiancée!? You told me your wife died you asshole!” And with her running charge toward the men, the once bored look of the bouncers disappeared as a new and unusual emergency presented itself.

Cale paid little attention to this latest development as he got to his feet and dusted away remnants of the bar floor from his gray t-shirt, jeans, and brown hair. With a closed lip smile and a tip of a nonexistent hat toward the still distraught looking blond girl, Cale finished his gin, dumped the ice into a napkin, and decided to call it a night.

As he walked outside into the crisp autumn night holding the napkin of ice over his nose, he noticed the fiery Hispanic girl sitting alone on the curb with her face in her hands. Despite just leaving the blond at the bar, Cale couldn’t escape the call to be chivalrous.

With a natural flair like he had done it countless times before, Cale pulled out a pen and scribbled something onto his bar receipt. When he reached the girl, he politely said while folding the receipt in half, “Don't get discouraged, beautiful.”

Before she had the chance to respond, he handed her the slip of paper and walked away as a familiar question played on repeat.

This is my life?

“What the hell happened in there, Cale?!” A stoned Brian Fitzgerald yelled at his friend half a block away.

Cale looked back and saw Brian and his other friend, Nick McCallagh trying to catch up. His friend's pace was absurdly slow thanks to Nick, who had his cell phone in one hand and a cane in the other. It was near impossible for him to walk without either item.

As his friends finally caught up to him, Brian announced, “There was all this yelling, and the next thing I know, you're walking out with a nose that looks like a Van Gogh painting.”

“Whatever, you're the artist, not me.” Brian slurred. “I saw you do your little note thing again to that girl on the curb. So what did it say this time?”

Cale half-said, half-sang, “
Your heart's full of liquor and me and everyone else are just ice in a glass.
”

Nick bit his lip for a second before giving an answer in the form of a question, “Billy Joel?”

“Nope, The National's
You've Done It Again Virginia
. Guess it stuck with me from the walk to the bar.”

Nick tapped on his cell phone and started to read, “The National is a Brooklyn-based indie rock band...”

Brian interrupted, “We don't need Wikipedia's help on this one, Nick.”

“Brooklyn, eh? I didn't know that,” Cale admitted as he reached into his pocket and pulled out a pack of cigarettes. He ran his thumb over the tops of the cigarettes until he found the one he was looking for - the glass one. It didn't contain tobacco, but high quality marijuana.

For this was Denver, Colorado.
The Mile High City
. A slogan which over time has grown into multiple meanings. There are more marijuana dispensaries than Starbucks. More breweries than McDonalds. Bar crawl clubs compete like rival gangs, and every bike has a holder for beer. The Mile High City may be a slogan to outsiders, but its residents know it really means a state of mind.

There was a flick of a lighter, and Cale quickly inhaled and exhaled. He didn't want to get stoned, just slightly light. He passed the glass piece to Nick who did the same short toke. He had to drive after all.

Brian declined due to a personal philosophy against mixing drugs. In his life he had done more drugs than Cale and Nick combined, and knew precisely how to be safe while getting extremely fucked up. He was also more intelligent than the other two combined, so maybe he was on to something?

As Cale put the glass piece back in the pack, Brian asked him, “So why don't you listen to music that people our age grew up with?”

Cale turned serious for a moment. “It will be a cold day in hell before I listen to U2.” A grin came across his face as he said, “But if it makes you feel any better, I'll give the next girl some Biggie lyrics.”

Cale put his arms around Nick and Brian and pontificated in a way that was only possible from someone drunk, slightly high, and bloody. “
What girl wouldn't be turned on by a strange guy giving them the note, When I see the semen, I'm leavin', Cause bitches be schemin'?
”

Brian responded, “With the way your face is looking, it won't matter what you tell these girls. Maybe you should make sure they are single the next time you are looking for a screw.”

“What happened back at the bar wasn't about getting laid. I was trying to save both of those girls from that douche bag. It's something my dad always stressed. You know, help out damsels in distress and all that other gentlemanly stuff. I couldn't just come out and tell those girls what an ass that guy was. Shoot the messenger, and I didn't want to get hurt.”

“A few cuts and bruises are nothing. It's my own fault anyways. I didn't protect myself or fight back because...” Cale felt embarrassed to admit this. “The pain felt good.”

Brian ignored Cale's confession with a confession of his own. “Even though I don't know how much help I would've been, I'm sorry I wasn't there to back you up.”

Hayride by Bonnie Bryant
Search and Destroy by James Hilton
Renewing Hope (In Your World #2) by Jennyfer Browne
Perfect Match by Kelly Arlia
Delivered (The Monster Trilogy Book 3) by Marissa Farrar
Conqueror’s Moon by Julian May
Beach Side Beds and Sandy Paths by Becca Ann, Tessa Marie
Bulls Rush In by Elliott James
Devil in the Deadline by Walker, LynDee
The War for Profit Series Omnibus by Gideon Fleisher
Our partner