Read A Promise to Believe in Online

A Promise to Believe in 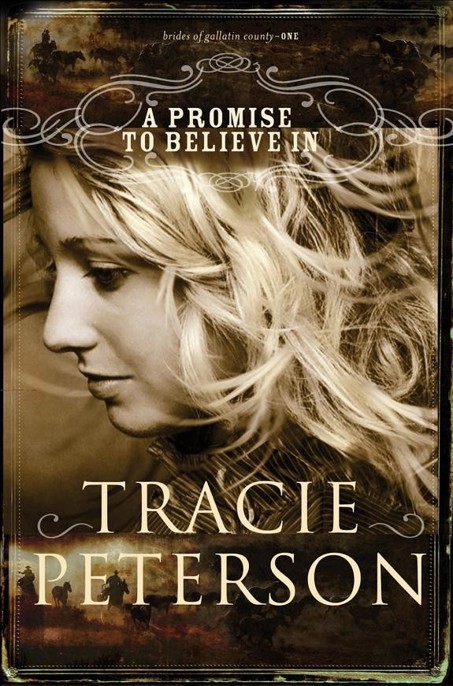 A PROMISE
TO BELIEVE IN

A PROMISE
TO BELIEVE IN

Brides of Gallatin County
BOOK ONE

A Promise to Believe In
Copyright © 2008
Tracie Peterson

A promise to believe in / Tracie Peterson.

To Deb and Brian,
who give me hours of
radio listening,
laughs, and encouragement!

www.traciepeterson.com
A Slender Thread • What She Left For Me • Where My Heart Belongs

S
ONG OF
A
LASKA

A Daughter’s Inheritance • An Unexpected Love
A Surrendered Heart

Shadows of the Canyon • Across the Years • Beneath a Harvest Sky

Distant Dreams • A Hope Beyond • A Promise for Tomorrow

A Shelter of Hope • Hidden in a Whisper • A Veiled Reflection

Treasures of the North • Ashes and Ice • Rivers of Gold

TRACIE PETERSON is the author of over seventy novels, both historical and contemporary. Her avid research resonates in her stories, as seen in her bestselling H
EIRS OF
M
ONTANA
and A
LASKAN
Q
UEST
series. Tracie and her family make their home in Montana.

Gwendolyn Gallatin looked up from her sewing and cocked her head to one side, unknowingly imitating the family dog, Major Worthington. The sounds of occasional gunfire and celebrating from the saloon next door had been frequent this evening, but she was surprised to hear her name above the ruckus.

A young boy of fourteen burst through the open front door, panting. Sandy hair fell across his dirt-smudged face. “Miss Gwen!” He could scarcely get out the words.

“Goodness, Cubby, whatever is the matter?” Gwen put aside her sewing and got to her feet as her sisters, Lacy and Beth, joined her from the kitchen.

Gwen’s hand went to her throat as she exchanged a frantic look with her sisters. Lacy, who was the youngest of the three and not yet twenty, raced to the front door. She wore a long split skirt that allowed her easier movement, but Beth, dressed very ladylike, was right behind her.

“Take us to him, Cubby.” Gwen felt as if the words were forced from her throat as she moved leaden limbs to follow her sisters.

“He’s in the street. Just in front of Pa’s saloon.” Cubby followed the girls out the door, Gwen at his side.

A small crowd had already gathered when Gwen arrived. Lacy was kneeling in the dirt beside her father, and Gwen watched as Beth touched a lace-edged handkerchief to the older man’s chest. When Gwen approached, the crowd parted, as if on cue. She could see the ashen color of her father’s face and hear the whispered murmurs among the rough cowboys, who smelled of sweat and beer.

“Gwennie,” her father whispered as she knelt beside him.

She put her hand to his head. He already felt cold. “Let’s get him to the house,” she told her sisters.

“Nonsense, Pa. People get shot all the time,” Lacy said, pushing back an errant strand of her cinnamon-colored hair.

Gwen looked at her father as if expecting something more. Surely he’d just succumbed to the pain. He couldn’t be dead.

Beth looked up at Gwen. “He’s not breathing.”

The entire event unfolded like a bad dream. People were saying things, bustling about, but Gwen was frozen in place, unable to move or hear them clearly. Their father was dead. What were they going to do now?

“I’ll take care of this,” Simon Lassiter said, helping Gwen to her feet. His brother, Nicholas, was right at her side. The Lassiter boys had always been good friends to the Gallatins.

Gwen looked at him, noting the sorrow in his eyes. “What should we do?” she asked softly.

“We get the sheriff, that’s what,” Lacy declared. She looked at the gathering of cowboys. “Which one of you shot him?”

“Nobody shot him, Miss Lacy,” Cubby said, shaking his head. “Leastwise, not on purpose. The boys—they was shootin’ it up, celebratin’.”

“Cubby’s right,” his father replied. Rafe Reynolds puffed on a cigar for a moment, then motioned to the gathering of drunken men. “Nobody was aiming to hurt George Gallatin.”

“But he’s dead, just the same,” Lacy said, looking to Gwen. “Someone needs to get the law out here.” She began to cry. “Pa deserves justice.” Beth put her arm around Lacy and nodded.

“You ladies go on back to the roadhouse,” Simon instructed. “We’ll take George on over to the shop. Nick can ride for the sheriff while I get George . . . well . . . get him ready to . . . ah . . . bury.” Simon wore a look suggesting he’d just as soon be wrestling a grizzly.

“I’ll bring his suit,” Gwen said without emotion. The shock of the situation washed her in a numbing sensation. Lacy and Beth were crying, but tears wouldn’t come to Gwen’s eyes. It was senseless to cry. Her father was dead, and it was clearly her fault as much as the man who’d fired the gun. After all, she was the one who’d sent him out that evening. And she was the one who’d been cursed.