Read A Rush of Wings Online

A Rush of Wings 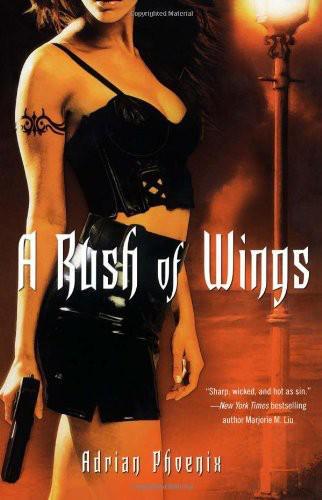 A Rush of Wings

Praise for Adrian Phoenix and
A Rush of Wings

“Phoenix slings the reader into an intense world of dizzying passion, tremendous heart, and arresting originality. Sharp, wicked, and hot as sin.”

“This one pulled me in from the first page. Heather and Dante are among those rare characters readers so often look for and seldom find.”

—Barb Hendee, bestselling coauthor of
Traitor to the Blood

“For far too long, Adrian Phoenix has been one of fantastic literature’s best kept secrets. Finally, she has fulfilled all the promise of her brilliant but infrequent short stories with
A Rush of Wings
. The novel is a fast-paced ride, its New Orleans setting appropriately rich and gothic, its characters both real and surprising. If you read only one debut novel this season, make it this one.”

“A goth urban fantasy that moves as fast as its otherworldly characters. A bit like
The Crow
crossed with
The Silence of the Lambs
crossed with a voice that is Phoenix’s own,
A Rush of Wings
is decadent, glittering fun, wrapped up in leather and latex.”

“
A Rush of Wings
is a dark, rich, sensual treat, where heroes and villains alike are fascinating and three-dimensional. Adrian Phoenix uses a perfect blend of suspense, romance, and lyrical prose to keep readers up until late, late at night turning pages. I can’t wait to read more about Dante and about the complex, multifaceted world in which he lives.”

—Jenna Black, author of
Secrets in the Shadows

“
A Rush of Wings
grabs you from the first sentence and doesn’t let go…Adrian Phoenix is one of the best new talents I have seen coming into literature in decades.”

“If vampires didn’t exist, we’d have to invent them. To do that deed, I’d recommend Adrian Phoenix.”

Special thanks to: Kris Rusch and Dean Smith for their friendship, guidance and support; to my agent, Matt Bialer, and to my editor, Jen Heddle, for believing in me—this has been a fun, kick-ass journey.

Thanks to: My son Matt Jensen, and his lovely partner, Sherri Lyons; to my son Sebastian Phoenix, and his equally lovely partner, Jen Phoenix; and to my own sweet Kylah; thanks to Rose Prescott, Karen Abrahamson, Louisa Swann (for crying), Jamie Whittaker, Tawnia Seward, Joe Cummings, and the rest of the OWN gang for all the support and encouragement.

Thanks also to: Lynn Adams, D.T. Steiner, Marty and Sharon Embertson, and Hunter Kennedy for always being there.

And last, but not least, thanks to: New Orleans, my soul-city; to Dark Cloud 9 of Portland, and Trent Reznor, for all the work and sweat and love he pours into his music and kick-ass live NIN shows, providing music that is both a source of inspiration and an emotional soundscape.

And thanks to you, the reader, for picking this book up and plunging into my world.
Merci beaucoup
!

1
Voice for the Dead

T
HE SWEET, CLOYING ODOR of blood and honeysuckle hung in the rain-misted courtyard like rancid smoke. A nude figure was curled against the courtyard’s ivy-draped stone wall, his bound hands tucked beneath his face like those of a sleeping child, a stark counterpoint to his swollen and battered face. A dark mesh shirt was twisted around his throat and night-blackened blood pooled around his body. Gleamed upon skin and stone.

And on the wall above scrawled in blood—

HEATHER WALLACE’S MUSCLES, KNOTTED from her long flight from Seattle, kinked even tighter. The message was a disturbing addition if this was the work of the Cross-Country Killer. A warning? A command? A dark, ironic joke aimed at his dying victim?

Drawing in a careful breath, Heather stepped from the back door of DaVinci’s Pizza and walked into the shadowed courtyard. She skirted the numbered evidence placards dotting the old stone floor.

“Daniel Spurrell, age nineteen,” Detective Collins said from the doorway. “From Lafayette. LSU student. Disappeared three days ago. Discovered in the courtyard about noon by an employee.”

Tortured somewhere else, then dumped, Heather thought. Why
here
?

Old-fashioned gaslit lanterns cast pale, flickering light across the courtyard. Beneath the blood stink, Heather caught a whiff of jasmine and ivy, thick and wintergreen, a white-flowered bouquet unable to mask the smell of death.

Three years she’d been tracking the CCK. And dealing with his victims never got any easier.

She knelt beside all that remained of Daniel Spurrell. Tortured. Raped. Slaughtered. Posed. Latest victim of a wandering sexual sadist.

A deep, thudding vibration emanated from next door, snaked up her spine. “What’s on the other side of the wall?” she said, her gaze on Daniel’s bruised face.

“Do you mean Goths? Or gamers?”

Collins chuckled. “Shit, you tell me. Sounds like you’re more in the know.”

“My sister fronted a band,” Heather said. “I met all kinds at her gigs.”

Long, midnight-blue hair veiled the boy’s face. NightGlo, Heather mused. A hair color Annie’d often used when she and WMD hit the stage in all their hard-edged punk glory. Before Annie’d flamed out in a spectacular bipolar meltdown and sliced her wrists onstage.

Heather focused on a mark on the boy’s chest—something cut or scorched into the flesh. She leaned in closer. Blackened skin. Blistered. A series of circles—burned with a
car lighter
?

Cold frosted Heather’s veins. The symbol was also new. Like the blood message. If this was the work of the Cross-Country Killer, then his signature, his
reason
, his drive for the kill had changed from an insular intimacy, his victim’s final desperate moments his and his alone, to an overt act inviting attention. Impossible. Theoretically. But if it
had
changed, what then?

Then she needed to find out why.

Heather studied Daniel’s face, the midnight-blue hair, the twist of cloth embedded into his throat, knotted around it. Breathed in the lingering smell of death and tasted it.

She heard her father’s voice, deep and low, his tone reverential:
The dead speak
only
through evidence. Through evidence alone are you a voice for the dead
.

The dead aren’t the only ones seeking a voice, Dad
.

Ah, Pumpkin
, they
found their voices the moment they picked up a gun, a knife, a rope, or a baseball bat, the moment they killed. Through evidence you will silence them
.

Heather turned away from Daniel’s curled body. She pushed rain-damp strands of hair back from her face, listened to the pounding bass beat coming from Club Hell.

Daniel’s killer spoke loud and clear. He was an organized killer, deliberate. So it was no accident that he chose the wall next to the club. Had Daniel met his killer in there? So why leave his body here and not in the club’s courtyard, on the other side of the wall?

And if this was the work of a copycat?

Then the Cross-Country Killer was still out there, enjoying his little jaunt across the States, casually selecting victims—male
and
female—like a Bermuda shorts–wearing tourist picking out postcards.

Still out there. Still needing to be silenced.

As Heather crossed the courtyard, a familiar truth burned bright in her mind: She’d never allow a case to go cold to protect the reputation of a loved one; never bury evidence no matter how much it hurt.

Unlike the famous James William Wallace.

Heather joined Collins at the threshold leading into DaVinci’s. She read the unasked question in the detective’s eyes:
Is the Cross-Country Killer in New Orleans
?

“Signature’s different,” she said. “The message…I’ll know more once we have the autopsy report and the DNA workup.”

Heather glanced at the body. Huddled. Praying hands. Naked in the rain. Stabbed over and over. Strangled. Young and pretty, once.

Heather looked at Collins. Six one, she judged, and lean. Midthirties. She noted the tension in his shoulders, his jaw. “How deep in the shit did you get buried for calling in a fed?”

A flicker of surprise crossed his eyes. “They made you special agent for a reason. Neck deep and it’s still piling up.”

“I’ll do what I can to dig you out,” Heather said. “I appreciate your call.”

Collins regarded her for a long moment, his hazel eyes weighing, considering. He nodded. “Thanks. But I’ll dig myself out.”

“Fair enough.” Heather met his gaze. “My gut tells me this
is
the CCK’s work. But that’s off the record.”

Shrieks of laughter and sharp jazz riffs drifted in from the street. And underneath it all, the steady thump-thump-thump of music from Club Hell.

“No, this is my first trip to New Orleans.”

“Let me thank your gut by treating you to a N’awlins-style dinner.” Collins pushed away from the doorway. His clean, spicy cologne cut through the courtyard’s thickening smell of death and blood.

“Thanks, but I’ll take a rain check. I want to look into a few things, maybe catch a little sleep.” Heather offered her hand. “I appreciate your time and help, Detective.”