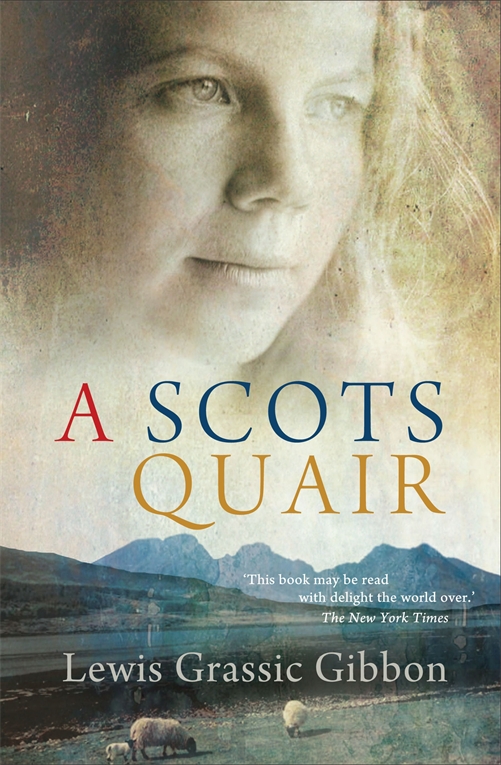 Edited and introduced by Tom Crawford

Edited with an introduction by
Tom Crawford

Note on the Text

To its original readers in 1932
Sunset Song
was a book in itself; they could not know it was the first part of a trilogy. Many reacted with disgust to its frank treatment of sex and childbearing, its scorn for the rich and powerful, its sometimes strident anti-clericalism. The
Kirriemuir Free
Press
classed it with those modern works that âgloat foully'; the
Paisley Express
wrote that âthe unredeemed close-packed filth, meanness, spite, brutality, lying squalor and stupidity wearies us'. Today it is one of Scotland's favourite books, and a television serialisation has made it even more accessible to thousands of readers.

When Gibbon, settled in the comfort of Welwyn Garden City, decided to write this novel, all his memories of the crofts on which he had been brought up, of village schools and Mackie Academy, Stonehaven, of farm tasks that had irked him, and of his parents' back-breaking toil, rushed together in an irresistible flood of memorial reconstruction and creative transformation. Once he had hit on his style the book seemed to write itself: it has been said that it was completed in less than two months. This no doubt accounts for certain geographical inconsistencies, for some errors of historical detail,
1
and for occasional lapses into sentimentality. But we can take such blemishes in our stride, as we do similar faults in Scott and Dickens, for the coherence of the whole is overwhelming. Thus the four main partsââPloughing', âDrilling', âSeed-time' and âHarvest'âare an obvious metaphor for the heroine's development in terms of the natural divisions of the cultivator's year. A communal climax brings all Kinraddie together at Chris's wedding, which slides over
into the great community festival of bringing in the New Year. The dedication of the memorial in the Epilude is also a ritual occasion where all are present, though this time wholly solemn and ceremonial. The book's texture, too, is beautifully fitted to its milieu. Folk and national song play an unobtrusive part, as does the imagery of the Song of Solomon, and both strands come together magnificently at the wedding. Beast similes are equally prominent in the style, identifying characters like comparisons in some epic, and male sexuality is often seen in terms of an animal, more specifically of a cat. At moments of stress or heightened emotion the beast similes may expand till they seem to fill the universe: at the whin-burning the tongue of flame is like âa red roaring beast', and Jean Guthrie's childbed pains were âas if [she] were being torn and torn in the teeth of beasts'.

In this novel Gibbon has created the most convincing female character in Scottish fiction, and so sympathetically, so inwardly, that many of the original readers wondered whether âLewis Grassic Gibbon' might be the nom-de-plume of a woman author.
2
The book celebrates a nation through a region; its farm folk are of the Mearns, but they are also typical Scots: their words are felt as Scots words, not those of a regional dialect. And it belongs, like Ignazio Silone's
Fontamara,
Anna Seghers'
The Price of a Head,
and John Steinbeck's
The Grapes of Wrath,
to a sub-genre that David Craig has termed âthe novel of peasant crisis', in which a class of independent smallholders is threatened with annihilation by war, technology, usury, or landlords' greed.
3

All these aspects come together in the struggles and responses of the heroine. She belongs to herself both before marriage and after, and there is an untamable, detached, still centre at the heart of her being. True, she tells us there are âthree Chrisses'âChris Guthrie, Chris Tavendale, and another that comes to the fore by the end of the novel; and Chris Guthrie is herself split in two, the Scots Chris of her family and forebears, and the more refined âEnglish' Chris created by her schooling. But we can never doubt the perma
nence of that still centre, and we feel it is obscurely connected with her intimations of the more than merely temporal. We are convinced that no man will ever
possess
her completely, though her heart is Ewan's for ever. We share her fears when she is first pregnant and her hatred of her husband before her emotions can come to terms with her new condition: we sympathise with her tortured rejection of the Ewan whom army life has turned into a beast, and with her brief union with the defeated Rob before he goes off to the army. Gibbon counterposes the poetry of Chris's independence (âher blood ran so clear and with such a fine, sweet song in her veins she must hold her breath and heark to it'), to the prose of it (âthen he said
Chrissie! Tired?
and she said
Losh, no, and
my name's Chris, Ewan!
). He lets us share in her growing individuality as she responds to the men around her. First, there is John Guthrie's domineering patriarchy: it is only at his graveside that she comes to
know
the agony of his self- torturing struggle when the âworld's fight and the fight of his own flesh grew over-bitter, and poisoned his love to hate' Second, there is her love for Ewan, with his vulnerable, instinctual maleness (Chris is the stronger character, as well as the more intelligent). Third, there is Long Rob: she is the stronger there too, for she
wills
their coming together; and fourth, there is her second husband, the Reverend Robert Colquhoun.

After war has destroyed her first marriage Chris begins to reconstruct her personality by âbuilding the walls of a sanity cold and high, locked in from the lie of life', determining to live in isolation behind them (the still centre is now frozen), till Chae Strachan tells her the true way of Ewan's death. Chae's narration, and the âsupernatural' intimation of the last paragraphs of âHarvest', enable her to complete her reintegration before she meets Robert. Chris can now share with Robert her new understanding of her separate and succeeding selves (âOh, my dear, maybe the second Chris, maybe the third, but Ewan has the first forever'), and the way is open for Chris's development in the more complex society of the second book in the trilogy,
Cloud Howe.
That
is Robert's second function in the novel: the first is to supply its emotional conclusion, the noble elegy for dead heroes and a vanished Way of life that he pronounces by the plaque on the Standing Stone, and which modulates so superbly into a
national
lament, with âThe Flowers of the Forest', and its Border words, piped by a Highlander, standing in the North East of Scotland. Yet the power of the book goes beyond question of solely national identity, for as the
New York
Times
reviewer saw so clearly in 1933,
Sunset Song
âmay be read with delight the world over.'

The present text follows that of the first edition of 1932 as scrupulously as possible, except in such matters of typographical styling as the use of roman, not italic, capitals for words emphasised in direct speech. Misprints that were never picked up in later editions have been corrected, and in the interests of clarity I have added marks of punctuation in three places. We have gone back to the original longer paragraphs of 1932, and the map of Kinraddie has been prepared by George Mackie from the one in the first edition.

If the book is entirely new to you, do not be put off by the glossary at the end. Whether you are Scots or English, American, Australian or Nigerian, speed-reading will sweep you into the action, and ifâas Gibbon himself advised in the note prefaced to the American edition of 1933âyou start with the Song itself, leaving the Prelude till later, you will soon find yourself effortlessly grasping the main sense of unfamiliar words from the context, and responding with delight to the heroine's inner voice and the rhythms of the community's speech. But do not skip the Prelude altogether: as the
New York Times
reviewer was acute enough to observe on 2 April 1933, it is âa very skilfull piece of literary engineering.'

It was Gibbon's strategy in his introductory note (p.xiii) to pretend that he was writing in English, with only a few modifications. But in reality he achieved something rather different. He cloaked the Scots vocabulary in English spelling, writing âblether' as âblither', âblaw' (to boast) as âblow',
âbraw' (fine, handsome) as âbrave', and so on, easing the reading for non-Scots. But for native speakers, the pronunciations and meanings automatically given to words like âongoing' and âchilde' strengthen their conviction that they are participating in a life that is both familiar and national, though gone, perhaps, for ever. Furthermore, different readers respond differently to matters of content as well as of style.
4
Those who have read Gibbon's essays and historical writings may be tempted to see the whole trilogy in terms of the diffusionist philosophy of history, an early twentieth-century version of primitivism with its notion that civilisation is a decline from some Golden Age.
5
It is an interpretation which is easily combined with naive allegory, equating Chris Guthrie with the Land itself, and by extension with Scotland as a nation. There are even readings which push allegory to a ludicrous extreme, identifying Long Rob of the Mill with Robert Burns and Ewan's desertion from the trenches with the Jacobite retreat from Derby in 1745.

Some readers have been irritated by what they see as Gibbon's overuse of âand' and âyou'. But the repeated âands' are a necessary feature of the style's extraordinary fluidity and motion: while âyou' is perhaps his most effective device for displaying both his entire fictional world and the mind of his heroine. In the Prelude and Epilude the voice is mainly that of a crony narrator generalised from the community, though it sometimes modulates into another through which the author's more sensitive perceptions can appear, as in the historical sketch of Kinraddie in the Prelude. The crony narrator, the âvoice of the folk' as he has been called, often employs âyou'. Gibbon'sâand the reader'sâmost vivid perceptions are mediated through Chris Guthrie's consciousness, which exists within frames of third-person past-tense narrative and description. We respond with ease as Gibbon's style shifts so smoothly between Chris's mind, these frames, and the crony narrator.

Gibbon often uses âyou' in a way quite rare in fiction, which he may even have invented: âself-referring you', as Graham Trengove has called it.
6
Self-referring you serves to
dramatise a character's thought; while generic you, equivalent to âeverybody', strengthens the impression of universality. By running the two together when dealing with Chris, Gibbon creates the overpowering conviction that even in the most particular and intimate moments of her life, Chris's experiences are universal. Gibbon's style is thus one of the great achievements of the trilogy, and should be seen in relation to Scottish forerunners like John Galt, as well as in the context of modernist innovators such as Joyce, Gertrude Stein and William Faulkner.

2
. I owe this piece of oral history to Dr W. R. Aitken, the distinguished bibliographer.