Read A Season for Sin Online

A Season for Sin 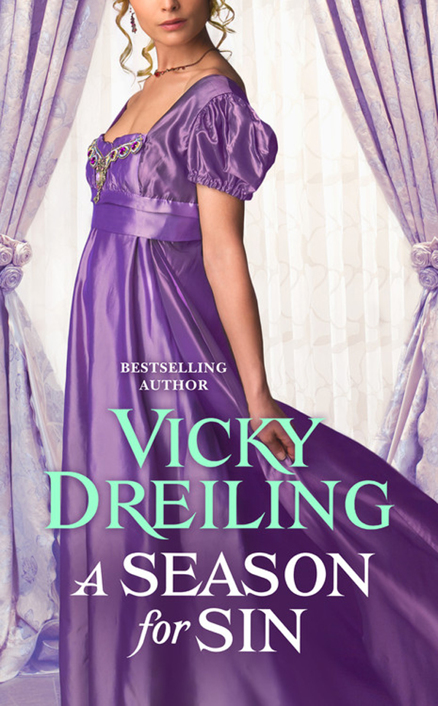 A Preview of
What a Wicked Earl Wants

A Preview of
How to Marry a Duke

To my wonderful agent, Lucienne Diver. I met you accidentally—twice!—and will forevermore believe in fate. I know how very lucky I am to have such a brilliant agent. The best part is that you’re loads of fun, too. Thank you for everything.

Mega thanks to my gifted editor, Michele Bidelspach. You’ve made an incredible difference in my writing and always have brilliant insights. I love working with you and know how very fortunate I am to have you as my editor.

Gracias
to my mentor Gerry Bartlett for all the advice and the laughs. I will never forget that hilarious road trip with you and Nina to RT! May we have many more sales and adventures!

Merci beaucoup
to my Super Woman Assistant Kati Rodriguez—you keep me sane and have fantastic ideas.

Special thanks to Deidre Knight and all who make The Knight Agency so special. In particular, I wish to thank Jia and Elaine for your assistance and timely responses.

High five to the #mancandymonday maniacs!

Big hugs to the Regency Rockstars and my Street Team buddy Kieran Kramer.

Thanks to my family for your support: Amber Rose, Jonathan, Mom, Daniel, Regina, and Vanessa.

Most of all, thanks to all the readers. xoxoxo

D
ismissing a mistress was the very devil.

Andrew Carrington, the Earl of Bellingham, strode to the town house, rapped the knocker, and braced himself. Having been in this situation several times before, he had some inkling of what was in store for him. In the past, he’d prepared pretty speeches in a misguided effort to soften the blow, but he’d never managed to finish before the tears and screeching started. He’d soon abandoned that tactic. A pretty bauble, the expected pension, and a hasty adieu had worked wonders on his last paramour, but he did not expect matters to progress so easily in this particular case.

The only easy thing about Marguerite was her virtue.

While he dreaded the inevitable scene, he could not tolerate her ultimatums any longer. Earlier in the day, she’d sent yet another perfumed missive, the fifth this week. In today’s note, she’d stated that she required his presence this evening for an urgent matter. Under ordinary circumstances such a presumptuous summons would set his teeth on edge, but truthfully, he was relieved that Marguerite had overplayed her hand.

He was bored out of his mind with her.

Thompson, the cadaverously thin butler, admitted him. Upon entering the foyer, Bell divested himself of his hat, gloves, and greatcoat. Then he addressed Thompson. “There may be a disturbance. Do not concern yourself.” Knowing Marguerite, there would definitely be a disturbance, a loud one.

Thompson frowned, drew in a breath, and then closed his mouth, as if reconsidering his response.

Bell raised his brows. “Is there something you wish to tell me, Thompson?”

He cleared his throat. “Mrs. Lamant asked me to show you to the yellow drawing room while she finishes her toilette.”

Doubtless, she meant to keep him cooling his heels for half an hour in her usual fashion. “Do not bother, Thompson. I can see myself up.”

Bell trudged up the stairs and wondered how he’d managed to misjudge Marguerite. When he’d first propositioned her, she’d given the impression of being both sweet and sensual, a combination he’d initially found fascinating. After a mere month, he’d discovered that behind that sweet smile lay a veritable shrew. He ought to have pensioned her off a week ago, but pressing business in Parliament had detained him.

Her constant demands for attention, jewels, and gowns aggravated him. Nothing ever satisfied her, with the notable exception of his boudoir skills. The last time, she’d swooned. He’d been rather proud of himself—until she’d awakened and carried on like a blasted harpy because he’d mussed her hair.

“Women,” he muttered as he entered the drawing room. Bell halted and looked about in horror. Evidently, Marguerite had taken it upon herself to make over the formerly elegant room in the latest chinoiserie style. He grimaced at the yellow wallpaper featuring hundreds of birds, but that wasn’t the worst part. Everywhere he looked there were pagodas—dozens and dozens of pagodas. The miniature tiered towers cluttered the mantel, the sideboard, and every other available surface in the drawing room. There were urns painted with pagodas. There were plates painted with pagodas. There was even a pagoda clock.

Bell rubbed his temple, wondering how much she’d charged on his accounts to transform the drawing room into this hideous chamber of pagodas—without his permission. It would all have to go, of course. He would have to instruct Thompson to hire someone to restore the room to its former state.

With a long sigh, he walked over to the Palladian window and gazed out the wavy glass into the small, dark garden. He’d never bothered to hire someone to tend it properly, since he came here only to visit his mistresses in the evenings. The prospect of finding someone new didn’t thrill him, but he was a man of lusty appetites. He hoped to hell he’d find someone less temperamental than Marguerite.

The clip of heels alerted him. He turned as Marguerite minced inside the drawing room, wearing a dramatic silver gown with some sort of filmy black netting over it. For a brief moment, he wondered if she’d anticipated his dismissal and decided to wear a mourning gown to show her heartbreak—for the jewels and gowns she frequently insisted were her due.

Marguerite approached him and halted only a foot away. Her gaze traveled down his body, lingering overly long on his tight trousers. Her lips parted as she reached out and then just as quickly snatched her hand back. “No, I must be strong,” she muttered.

He frowned. “I beg your pardon?”

She met his gaze and turned away. “Why must you look at me in that mesmerizing fashion?”

“Marguerite, I have no idea what you’re about,” he said.

“Oh, yes, you do. You use your blue eyes as a weapon to fell damsels.”

He wondered if she’d been nipping from the brandy decanter. “Are you unwell?”

She lifted her chin in a lofty manner and shook back her glossy, black curls. “You came. I had my doubts.”

Based on his previous experiences, he knew to expect weeping and screeching. This time, he decided to present the gift before he gave her the bad news. Marguerite’s eyes gleamed as he offered her the bracelet. After donning it, she scratched one of the emeralds.

“It isn’t paste,” he said, not bothering to hide his exasperation.

“Well, a lady must be sure,” she said in a petulant tone.

Marguerite hardly qualified as a lady, but he had no intention of stirring up her temper. “There is something we need to discuss,” he said.

“Indeed, there is. I have become exceedingly unhappy with your increasing neglect.” She sniffed and drew a handkerchief out of her bosom to dab at her dry eyes. “You’ve left me all alone and bereft for an entire sennight.”

He might have known she would launch into her complaints straight away. “From the beginning, I explained that my duties are my first priority.” He didn’t add that he’d begun to dread visiting her.

“At the very least, you could have notified me.” She admired the bracelet again. “Do you realize you’ve never even bothered to send a posy?”

If only he’d known she preferred flowers to jewels and gowns, he might have saved himself a veritable fortune.

“I am unaccustomed to such mistreatment,” she said.

He set his fist on his hip. “I have never mistreated you.”

“Oh, yes you have,” she said, her voice pitching up an octave. “You regularly abandon me for the lures of your club. When you do decide to visit, you never give me any notice.”

Her brittle voice irritated him, but he kept his tone even. “You’re my mistress. I’m not required to give you any notice.”

She drew in her breath. “I’m very sorry, Bell, but I can no longer tolerate your frequent absences and neglect.”

He stared at her. Why wasn’t she weeping and begging, the way his previous mistresses had done?

Marguerite sniffed. “I regret to inform you that I no longer find you a suitable protector.”

For a moment, he stood there, unable to believe what he’d just heard. Then the words crashed into him. The devil! She’d dismissed
him
.

She regarded him with a fleeting, smug smile. “I’m sorry to disappoint you, but a woman of my beauty and elegance deserves an attentive gentleman.”

Belatedly, he realized the reason for Thompson’s earlier hesitation and clenched his fists. “You wouldn’t leave, unless you had another protector waiting in the wings.” Quite possibly, the man had been in
his
boudoir. He gritted his teeth at her audacity.

“We can settle this amicably,” Marguerite said. “I believe I’m due a pension.”

He regarded her with an incredulous expression. “You betrayed me, and you think you’re due a pension?”

“We have a contract.”

“You broke the deal when you took another man into
my
bed.”

“I did not,” she said. “At any rate, that was never stipulated.”

She clamped her lips shut.

“What about my pension?” she said.

He gave her a cynical smile. “You’re wearing it.”

Disgusted, he strode out the door to the accompaniment of crashing china. He hoped she broke every single pagoda. Determined to quit the place as quickly as possible, he strode down the stairs. His boots clipped on the marble floor as he approached the foyer, but he heard no more breaking objects. Hell.

Thompson regarded him with a nervous expression as he handed Bell his greatcoat, gloves, and hat.

“See that Mrs. Lamont and her belongings are gone no later than day after tomorrow,” Bell said. “And burn the sheets.”

An odd strangled sound alerted Bell. He looked out at the great hall and the landing, but he saw nothing. It was probably one of the servants eavesdropping.

“I will see that the sheets are burned, my lord,” Thompson said.

Bell returned his attention to the butler. “Tell her to take those hideous pagodas with her.”

After donning his greatcoat, hat, and gloves, Bell addressed the butler in a casual tone. “Who is Mrs. Lamont’s gentleman caller?”

One Real Thing by Anah Crow and Dianne Fox
Palace Circle by Rebecca Dean
Kif Strike Back by C. J. Cherryh
Stay Tuned for Danger by Carolyn Keene
Everything in This Country Must by Colum McCann
Denim and Lace by Diana Palmer
The Legend of Darklore Manor and Other Tales of Terror by Vargo, Joseph, Iorillo, Joseph
Missing Royal by Konstanz Silverbow
To Catch a Pirate by Jade Parker
The Billionaire's Baby by Dahlia Rose
Our partner