Read A Skeleton in the Closet (Kate Lawrence Mysteries) Online

A Skeleton in the Closet (Kate Lawrence Mysteries) 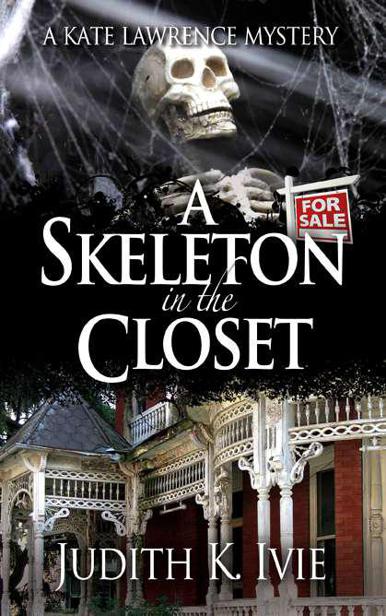 A Skeleton in the Closet

A Kate Lawrence Mystery from

Names, characters and incidents depicted in this book are products of the author’s imagination or are used fictitiously. Any resemblance to actual events, organizations, or persons, living or dead, is entirely coincidental and beyond the intent of the author or the publisher.

Dedicated with Appreciation to:

for
generously allowing me to use the

as
the inspiration for this

all
of the other good folks at the

In the Kate Lawrence Mystery Series:

A Skeleton in the Closet

Those of you who are already familiar with the Silas W. Robbins House at

185 Broad Street
in Wethersfield, Connecticut, don’t need to be told that
A Skeleton in the Closet
is entirely a work of fiction, but others may. Purchased in 2001 by
Shireen
and John
Aforismo
and restored to its current splendor over the ensuing six years, this French Second Empire treasure has a very real and fascinating history dating back to 1873, which I urge you to discover for yourselves at
www.silaswrobbins.com
.

As did most of the other residents of Wethersfield, I followed the progress of the restoration with excitement and rejoiced at the grand opening of the
Aforismos
’ bed & breakfast in October 2007. When I approached
Shireen
and John about a year earlier with the idea of setting one of my Kate Lawrence mysteries in the house, they took a shine to the idea. We then spent a delightful, if somewhat unconventional, afternoon exploring the house from top to bottom to identify likely hiding places for a body. It’s not everyone’s idea of a good time, but I had a ball.

A Skeleton in the Closet
is not the actual story of the Silas W. Robbins House, but it was inspired by the grand old structure and by the
Aforismos
, who allowed this author to play a game of “What if …?” I am very grateful, and we all hope you enjoy the results.

A lifelong Connecticut resident, Judith
Ivie
has worked in public relations, advertising, sales promotion, and the international tradeshow industry. She has also served as administrative assistant to several top executives.

Along the way, Judi also produced three nonfiction books, as well as numerous articles and essays. Her nonfiction focus is on work issues such as two-career marriages,
workaholism
, and midlife career changes. Shortly thereafter she broadened her repertoire to include fiction, and the Kate Lawrence mystery series was launched.

Whatever the genre, she strives to provide lively, entertaining reading that takes her readers away from their work and worries for a few hours, stimulates thought on a variety of contemporary issues-and gives them a laugh along the way.

Please visit
www.JudithIvie.com
to learn more about all of her books, or use the order form at the back of this book to order her other titles. Judi loves to hear from readers at [email protected]

The long, wet spring had finally turned the corner into a Connecticut summer so glorious that the residents of Old Wethersfield decided among
ourselves
it had probably been worth the wait. Now that we were into June, the houses on both sides of the Broad Street Green boasted lush lawns and flower beds glowing with every color imaginable under canopies of trees in full leaf. The fields behind the farmhouses showed promising signs of the sweet corn to come, and although I knew very well that I had another month to wait, I was already salivating at the thought of wolfing down a tomato so fresh it was still warm from the sun.

The grand old specimens of oak, elm and beech that anchored the green itself dozed in the morning sunshine, no doubt congratulating themselves on having survived yet another New England winter. Property was proudly maintained here, and nearly every Cape Cod, Colonial, Victorian and farmhouse along our route shone with fresh paint and liberally applied elbow grease.

Usually, my daughter Emma and I hiked the loop from the Law Barn on

Old Main Street
, where our respective businesses were housed, to the Wethersfield Cove and back, but we varied our route occasionally to check out properties for sale in different neighborhoods. It’s not everyone’s idea of a good time, but we both have reason to be interested in local real estate. Along with my partners, Margo Farnsworth and Charlene Putnam, I own MACK Realty. Emma, a paralegal, and her friend Isabel, who had just passed her bar exam, were launching a real estate law practice in the Law Barn’s spacious loft. House sales were booming in what had to be the last of a sustained hot market, and our morning constitutionals gave us an opportunity to mix a little business with pleasure before the workday claimed us.

We slowed our pace as we approached the little pond on the corner of Spring Street, where a dozen geese and a sprinkling of ducks habitually summered. Emma, her older brother Joey, and I shared a fondness for all types of critters, and we liked to follow the progress of the fuzzy ducklings and goslings as they morphed into sleek adulthood, ready for their fall migration to more hospitable winter quarters. For the past few years, a pair of black-legged mute swans had also selected our little pond as their summer home. Since swans are both bossy and territorial, their presence didn’t please the rest of the feathered inhabitants, but the human visitors were delighted. This year’s hatch had produced four splendid cygnets.

This morning, the elegant twosome seemed to be sleeping late, as they were nowhere in sight. I hadn’t visited the pond in several weeks, and I was eager to see the babies and be sure that all were present and accounted for. The few Canadian geese who had not been run off, plus a small number of sturdy mallards, were taking advantage of the swans’ absence by preening their feathers on the grass near us.

“
Eeuuuww
, what’s that?” Emma stood on the bank and twisted her long, ash blonde hair into a high ponytail as she scanned the bank on the far side of the pond, squinting in the bright sunlight. She leaned forward and frowned. “It looks like a hairy chicken.”

I peered in the direction she was pointing. Though my eyes aren’t as young as my daughter’s, I could make out what did indeed look something like a chicken covered in dryer lint wriggling in the tall grass. One scrawny, unattractive wing stretched out briefly. Instinctively, Emma shrank away, but the sight made me smile. “Maybe it’s a baby buzzard,” she ventured. “Do buzzards live around here?” The creature in question now unfolded a long, wobbly neck and lifted its head. Emma looked at me in bewilderment. “What in the world …”

Before I could speak, her question was answered. Out of the marsh grasses to the left of the mysterious specimen strutted two magnificent swans, herding three more of their babies. When the adults had their four hideous offspring satisfactorily corralled, they all filed into the water. First
came
Dad, gliding slowly across the still surface. The four youngsters paddled after him furiously. I noticed that one of them was a bit smaller than the others, but he or she seemed to be able to keep up just fine. Mom brought up the rear. “Baby swans!” Emma crowed in disbelief. “Hans Christian Andersen sure had that ugly duckling thing right. I’ve never seen one before, have you,
Mamacita
? It’s kind of like with pigeons. You know there must be babies, but I don’t know anyone who has actually seen one.”

Emma’s nickname for me was a hangover from a long-ago semester of high school Spanish. After ten years, it had almost stopped annoying me. “They’re cygnets, technically speaking, and yes, I’ve seen them before. They’re absolutely adorable when they’re first hatched, just like ducklings. This is their awkward adolescence, but they’ll morph into beauties in a few more weeks.” We stared at the gawky youngsters as their proud parents continued their circuit of the pond, oblivious to our opinions. I checked my watch. It was only 7:15, still too early for the dog walkers and the baby strollers.

I scanned the neighboring apartment buildings to be sure we wouldn’t be disturbed for a while longer, then eased open the trunk of my
Altima
and extracted the digital camera I kept handy. I wanted to be able to get a closer look at these fascinating babies when I got back to my computer.

The Pig Did It by Joseph Caldwell
Vegas Sunrise by Fern Michaels
The Temptation of Laura by Rachel Brimble
The Falling Kind by Kennedy, Randileigh
As Tears Go By by Lydia Michaels
Worth the Risk by Melinda Di Lorenzo
Alexander (Vol. 2) by Manfredi, Valerio Massimo
Silverthorn by Sydney Bristow
Here All Along by Crista McHugh
The Lariat (Finding Justus Series) by Ashley Dotson
Our partner