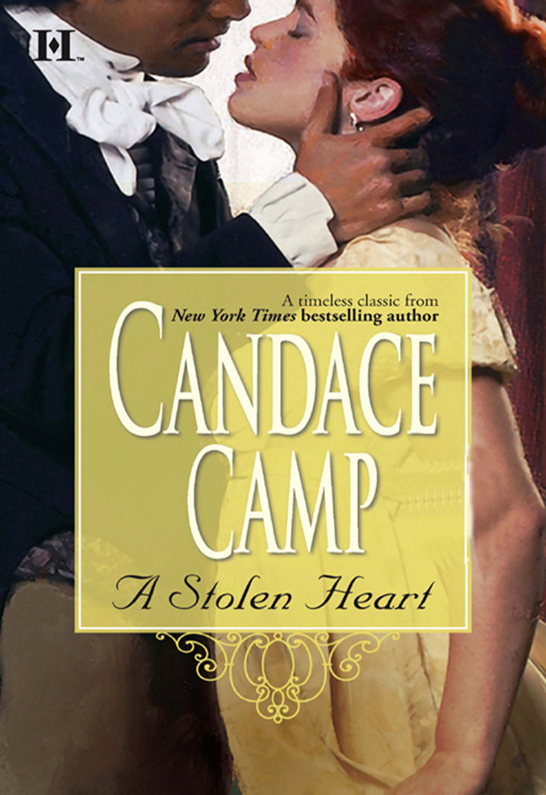 Praise for the novels of
C
ANDACE
C
AMP

“Camp has again produced a fast-paced plot brimming with lively conflict among family, lovers and enemies.”

—
Publishers Weekly
on
A Dangerous Man

—
Booklist
on
An Unexpected Pleasure

—
The Best Reviews
on
An Unexpected Pleasure

“Camp brings the dark Victorian world to life. Her strong characters and perfect pacing keep you turning the pages of this chilling mystery.”

“From its delicious beginning to its satisfying ending, [
Mesmerized
] offers a double helping of romance.”

Other newly released classics from
Candace Camp and HQN Books

Other books by Candace Camp

So Wild a Heart

L
ADY
C
HILTON PUSHED BACK THE
draperies of her bedroom window and peered out into the night. In the distance she could see fire leaping up, and she shivered.
It was the Mob.
She was sure of it; she had heard their howls the day before, seen them pushing through the streets like some great amorphous beast, hungry for blood.

She stepped back from the window, her hands twining together nervously. Emerson was certain that the Mob would not turn on them. Her husband had that careless, casual confidence of the English that no harm would dare come to them. Simone was not so sure. She was, after all, French, and a member of that aristocracy whom the Mob was so eager to destroy. The fact that she was married to an Englishman might not be enough to save her if the Mob came here—indeed, she feared that her French identity might destroy her husband, as well.

It was that thought that made her sick with fear. What would happen to her little ones if the
sans-culottes
came to their house?

She stood for a moment indecisively, a beautiful woman with liquid brown eyes and clouds of dark hair, dressed in the finest clothes that Paris had to offer, her neck circled with precious gems, yet paper-white with fear, her huge eyes haunted.

Finally, with a little sob, she went over to her dressing table and pulled out her jewelry case. Quickly she took out her jewelry, glittering gold studded with diamonds, rubies and emeralds, satiny pearls strung together or dangling from ear studs. Some were family heirlooms, others gifts from an adoring and wealthy husband. Simone was a woman who loved decoration, and her vivid dark coloring and white skin were perfect foils for the richly colored jewels.

She stuffed the pieces into a velvet bag, paying little attention to the sparkling gems. Last, she reached up and removed the emerald drops that hung from her ears, then the matching emerald pendant that had been a wedding present from Lord Chilton eight and a half years before. Her hand closed around it for a moment; it was still warm from the heat of her skin. Then, with a little sigh, she slipped it, too, into the bag.

Her friend could be trusted; after all, she was trusting her with her children, far more important than any jewelry. If she survived, she would be reunited with them all.

She opened the false bottom of the jewelry case and took out three small items. Though relatively inexpensive, they were the most precious, for they belonged to her children. There were two lockets that opened up to reveal miniature portraits of herself and Emerson. The Countess had given them to the girls last year at Christmas. The third object was a plain, bulky ring, far too large for her son’s finger. She strung it on a piece of string so that he could wear it around his neck. The ring was ordinary looking, flat-topped with an odd design. But it was hundreds of years old, the family ring of the Earls of Exmoor. Only heirs to the title were allowed to wear it. Emerson owned it now, though he did not wear it. One day it would be his son’s.

Simone went to her desk and took the quill from the inkwell and began to scratch out a note. She was never the best of letter writers, and this note was disjointed and almost illegible. But it would at least let the Earl and the Countess know what had happened. She stuffed it into the bag with the jewels.

Clutching the velvet bag and the three small pieces of jewelry, Simone left her bedroom and started up the stairs to the nursery. Downstairs, she could hear Emerson’s voice, growing impatient as he tried to explain to her parents why they had to leave Paris as soon as possible. Simone shook her head. Her parents were frozen by fear, so much in shock from the upheaval of their world that all they seemed capable of doing was staying still and saying no. Simone and Emerson could hardly leave them behind; it was why they had not left already. But she refused to let her children die because her parents were too stubborn or too silly to do what they ought to.

That was why she was sending the children away. She would entrust their lives to her dearest friend here, who was leaving for England and its safety tomorrow. She had not asked yet, but she was sure that her friend would do it. Childless herself, she had always doted on Simone’s children, especially the youngest. Simone would get them away to England, and the jewels would help pay their expenses, if necessary. Once they were safe, if Simone did not make it, they would be her last present to her children.

Simone reached up to dash the tears from her eyes. She could not let the children see her crying; that would frighten them even further. So she pasted a smile on her face before she opened the door to the nursery and went inside. The French nurse was already putting them to bed. Simone dismissed her, saying that she would tuck the children in herself.

Once the maid had left, she turned to the three children. For a long moment she let herself look at them, the lump in her throat swelling as she faced the thought that perhaps she would never see them again. There was John, with the thick, dark hair he had inherited from her and her own dark brown, almost black eyes. A sturdy boy of seven, he had his father’s long bones and mischievous smile, and Simone had not met a woman yet, of any age, who did not succumb to his charms. She bent to kiss his forehead, then moved on to kiss Marie Anne’s cheek. Marie Anne had her father’s eyes—deep blue, guileless orbs—and the bright red curls that had surprised them both, coming as she did from his blondness and Simone’s black hair. But the Countess had nodded wisely and said that red hair cropped up periodically among the Montfords.

She had to swallow hard as she moved on to Alexandra, the baby. Only two, she was a delight; chubby and sunny of spirit, it seemed she was always laughing or babbling. She was, Simone’s mama said, the very image of Simone when she was a toddler, with black curls and merry dark brown eyes and a laugh that made everyone who heard it smile. Simone picked Alexandra up and hugged her, then sat on the floor with the children and put Alexandra in her lap.

“I’ve come to tell you that you are going on a trip,” she said lightly, hoping that her voice displayed none of her anxiety. “You’re going home to England to see your grandmama and grandpapa.”

She told them about her friend, whom they knew and liked, and how they must go with her by themselves, but that Mama and Papa would be joining them later. Though she usually spoke French with her children, who were as fluent in it as in English, she used English with them now.

“You must only speak English,” she cautioned them. “Not French, because you are going to pretend to be her children, not mine. Won’t that be a fun game?”

John regarded her solemnly. “It’s because of the Mob, isn’t it?”

“Yes,” Simone admitted. “That is why I am sending you this way. It will be less danger to you. So watch out for the girls, John, and make sure that they don’t get into trouble. Don’t let them speak French, even when you are alone. Can I rely on you?”

“Good. That’s my little man. Now, here are some things you must wear. Don’t take them off—even Alexandra. John, you make sure of it.”

She hung the ring on its rough string around his neck and tucked it under his shirt so it did not show. She did the same with each of the girls, stuffing the lockets down the necks of their dresses.

The children were dressed fairly plainly, in the clothes they wore to play in. That was the best that she could do, Simone thought, to hide their aristocratic backgrounds. Quickly she placed a few more changes of play clothes, nothing with lace or velvet, in their little cloaks and tied them up into bundles.

“Now we must go very quietly down the stairs,” she told them.

“Can’t we say goodbye to Papa?” Marie Anne asked, bewildered and looking about ready to cry.

“No, he is talking to Grandmère and Grandpère. We must not disturb them.”

She knew that Emerson would be furious with her for sneaking the children away without telling him. But she could not risk letting them say goodbye to him. His confidence in his indestructibility was too great. She was afraid he would forbid her to send them away, sure that they would be safest with him.

Simone gave them all a shaky smile and stood, picking up Alexandra to hold her in one arm and carrying Alexandra’s little bundle in the other. “Now, children, pick up your bundles of clothes. Stay close. Hold on to my skirts and don’t let go, no matter what happens. And be very quiet—like little mice.”

John and Marie Anne nodded, though she could see the uncertainty in their faces. They walked quietly out of the room and tiptoed down the stairs. Simone did not go out the tall front door, but led them to the side door. She paused, her hand on the knob, taking a deep breath. John and Marie Anne clutched her skirt.

Simone opened the door, and they scurried into the night.

Incubation (The Incubation Trilogy Book 1) by Laura DiSilverio
THE MARINE'S LAST DEFENSE by ANGI MORGAN,
Lyre by Helen Harper
Freeman by Leonard Pitts Jr.
Children of the Wolves by Jessica Starre
To Kill a Wizard: Rose's Story (The Protectors of Tarak Book 1) by Lisa Morrow
The Sheikh's Impetuous Love-Slave by Marguerite Kaye
Limestone Cowboy by Stuart Pawson
His Passion (By His Command #4) by Ana W. Fawkes
Stone: At Your Service (Carolina Bad Boys #1) by Rie Warren
Our partner